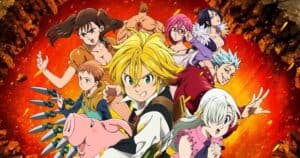 In this article we are going to give you our 7DS Tier List (7 Deadly Sins Tier List).

If you have heard about the amazing anime called 7 Deadly Sins (Nanatsu no Taizai) and you like it, I have good news for you. There is an equally amazing mobile game adaptation of the anime. Yeah, that’s right, you can play as all your favorite characters from the anime. Even if you are not a fan of the anime, we guarantee you that you will find something entertaining about the game. The developers have done a great job of creating a complete world with unique characters and crazy encounters.

If you are a newcomer to this game, the most common problem you are going to face, is being overwhelmed by how many characters you can get in this game. Some characters that at the beginning seem great might be weak later on, or the characters you thought were weak might be the ones that will carry you through the endgame content. Don’t worry. That’s where our 7DS Tier List comes in. We have ranked all the characters in tier so you can get an idea of which characters work and which ones should be avoided.

Without further ado, let us get into the list.

As was expected, most of the 7 deadly sins are on this list. It makes sense since they are the protagonists of the game. These characters can deal crazy amounts of damage, and you should focus on creating a team with these characters as your focus. Of course, they are not easy to get, so don’t get disappointed if you don’t have any S-Tier characters on your team, with time you will find some.

These characters fall a bit short of being at the top of our list, but this doesn’t mean that they are not beasts in the game. You can easily breeze through the game’s content just with 1 or 2 of these characters in your team. If you combine them with an S-Tier character, you will have one of the best teams in the game by default. Highly recommended characters.

If you are aiming for the top, you are meant to fall a bit short. This is how people end up in the B-Tier. In reality, it’s just chance, so if you get B-Tier characters, we would recommend you to use them carefully. Don’t invest too much in them since you can get better characters, but for most cases, they should be fine choices. Don’t expect to be shocked by the damage they deal, because you will not be.

Maybe there is something wrong with playing these characters. Their abilities are lacking not only in damage but in synergies as well. The supportive heroes aren’t so strong at buffing your main characters and your damage dealers are closer to hugging than they are to hit. Their use is situational at best. We recommend you replace them with the first opportunity you get.

You can imagine if we were so harsh for the D-Tier characters, what we are going to say about the ones at the bottom of the list. Well, if you can imagine it then we better not say it. Just don’t put them in your team.

Who is the strongest character in 7Ds?

“As it is in the anime, so it is in the game”, a very famous saying that we invented right now about Escanor. Escanor is the sin of pride, and he is extremely strong in the anime. The same goes for the game. He can deal incredible amounts of physical damage to the enemy, and his ignite is going to finish the job if his raw damage output doesn’t. You would be really lucky if you got Escanor.

This game has done many things well, and the one that we find the most important is that it has created an interesting parallel universe to the one from the anime. Another one is that they have blessed this game with various unique characters. Some characters are unique because of how bad they are but that is the price you have to pay for variety. Hopefully, after you have read this article, you know which direction you want to go with your team. We hope you succeed in the difficult journey ahead of you. Good luck!