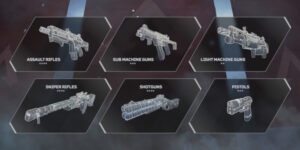 In this article, we are creating an Apex Legends Tier List for Guns and Weapons. Apex Legends has 24 weapons in Season 8, each with its statistics and style. There is a gun for every playstyle, but there are some better choices amongst the guns. So, without wasting any more time, let’s just dive into the list.

B-Tier (I Love This Gun)

F-Tier (Anyone find anything else?)

Don’t worry visual people, we got you covered:

As you see, on the first tier of course we have the Supply Drop weapons (Peacekeeper, Prowler Burst PDW, Kraber .50-Cal Sniper). These are the weapons that can only be acquired randomly from a supply drop. They are so rare of a reason. All of them deal crazy amounts of damage and should be preferred. The only thing keeping them balanced is their limited ammo.

As always, R-99 and R-301 Carbine are on this tier. They have amazing DPS potential and they are the best of the best SMGs in the game. M600 Spitfire is representing the heavy weapons and has seen some huge player preference as the game develops. It can output a lot of damage and is very reliable in both short and long-range.

Of course, EVA-8 Auto would be on this tier. The amount of damage it can output is disgusting and, even though it is not the same as when it was a “supply drop only weapon”, it still can tear through Health and Shields in a few good hits.

I love this gun Tier (B-Tier)

On our next tier, we have our favorite weapon, the Wingman. The only reason it’s not listed as an “Oh Yes!-Tier” weapon, is because it requires 2 hours of meditation before using it (you need to calm down). It just feels great hitting the shots with a Wingman. Together with the Wingman, we had to add the Hemlok Burst AR, a very reliable weapon that can deal great damage if you hit all the shots. The VK-47 Flatline has a place in this tier as well. Eventhough its very similar to the R-301, it has a harder recoil pattern making it a secondary choice.

Our strongest sniper for the game (except the Kraber .50-Cal Sniper) is the Charge Rifle. It has good damage and great hit scanning potential. The Volt SMG would be on the “Oh yes!-Tier” if it wasn’t for its unreliable hip fire. Still a very strong SMG. The Mastif Shotgun has fallen to this tier after it’s recent damage nerf, still a pretty good choice.

Here we find the G7 Scout and the Triple Take, both great long-distance options and some great energy weapons like the and the Havoc Rifle, which is a beast for short distances. Its only negative is their windup time until it gets going. In a game where God-like reflexes are a necessity, this can cost you a lot.

On this tier, we are starting to find weapons that are at a clear disadvantage from their alternatives.

For the heavy weapons, we have the 30-30 Repeater. A worst version of the Wingman that needs a nerf before it becomes a usable weapon in the game. The Alternator SMG maybe looks small but compared to its size, it’s a force to be reckoned with. Although if you get the opportunity for R-99 of R-301, we suggest you change it. We also included the Devotion LMG on this tier. It’s fun to play with, but there are much better option if you want a lot of damage (see Spitfire)

Anyone find anything else? Tier (F-Tier)

Now we are getting to the really bad weapons of Apex. Some of them were designed to be starter weapons, like the RE-45 Auto and the P2020 and some others are just bad by accident. I am looking at you, L-star. Yeah, with the L-Star EMG you can do a lot of damage up-close, but the muzzle flash combined with the bad accuracy make it a bad choice for anything else than the first few skirmishes. Longbow DMR is the worst sniper, with very low damage compared to its fire rate, and strong recoil.

We have a tier, specifically made for this weapon. It’s a shotgun that requires the accuracy of a Wingman to hit, without the damage or the range. It always makes us laugh when we land, and we only have to use a Mozambique Shotgun to fight. I wish there was an option to throw the weapon to the enemy. Probably it would do more damage.

There are many attachments for each gun in apex. The attachments change some aspects of the weapon. But don’t worry about all these, the gear (Armor, Helmet, Knockdown shield, Backpack) and the weapon attachments all follow the next color-coding system:

It’s so simple! If you see gear or attachments for your guns, just choose the best color. The only exception is the sights. About sights, the choice comes down to your preference, so you should choose the sights that you are most comfortable with, also taking into account at what distance you want to play. In general, the most proficient players prefer the basic red dot sights for close range.

Don’t worry, we haven’t forgotten about the hop-ups. Hop-ups (if you are not aware) are attachments for some of the weapons, that give them a specific buff. They are all Epic or Legendary quality and give a big buff to some weapons. There are the following Hop-ups:

We did not analyze every weapon with its hop up in this article. But it’s safe to say that all the weapons with their hop-up are better than the alternative without. So, for every weapon that gets a hop up, we will say it goes up one Tier.

Start actively practicing your aim while playing Apex Legends and don’t get frustrated. With time you will notice you are landing more shots. Combine it with some great movement and map awareness and you will be a predator in this game (at heart, at least).