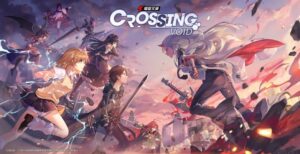 In this article, we will be presenting our simplified Crossing Void Tier List. I think that the creators of Crossing Void have a great idea of what their demographic is. The people that love JRPGs will probably love anime as well. Combining these two topics is a genius move that has created a very successful and satisfying game. Of course, if you don’t combine it with the right mechanics and some compelling story, then you just have a fan-service attempt that would offend both jRPG fans and anime fans. Thankfully 91act got it right.

If you start playing the game, you might get lost with all the mechanics and numbers you have to take into account to advance the levels. Don’t worry, we created a Crossing Void Tier List, ranking the main characters and the support characters. Take into account that this list is an indicator of what is working in the current meta of the game. It’s not only about numbers. It’s about optimizing the strategies that work.

We decided to exclude the Limited Characters for this list since they will just complicate someone that is just starting the game. So… keep it simple!

If you are trying to create the strongest possible team in Crossing Void we can understand ignoring these characters, but in all other cases, you should definitely pick them and utilize their strengths. Especially if you combine them with their ideal support character, then you have some serious firepower to breeze through all of the content of the game. Just farm for the right equipment and you are all set.

Here we find the characters that are starting to lose some firepower and utility compared to the ones higher on the list. Although in Crossing Void there are no completely useless characters, you should start preferring other main characters.

Regrettably, we had to choose some characters to place at the bottom of this list. Although you could still make them work with the ideal setup, there is no specific reason to focus on using these characters. Actually, you would be at a disadvantage, since their ATK and skills are inferior to every other character higher on this list.

Who is the best character in Crossing Void?

Our pick for the strongest character (main) in Crossing Void is Alice. For those who don’t know (might be a lot of you), Alice combined with Kirito as support, has the best damage in the game with versatility that makes her an all-around beast. Even tanking is within her abilities if she has the right equipment.

We are lucky that a game so well balanced and alive as Crossing Void exists, at least for the fans of the jRPG and Gacha games. So if you want to have a great time playing the game and go through it with a purpose on your mind, we suggest you study this Crossing Void Tier List and learn all the combinations of characters.

Other than that, the best way to get good at the game is by practicing and through trial and error. Join the battle and let’s slay these bosses.

We hope you found this list useful! if so, then be sure to look at some of our other lists, like this one about Epic Seven.