Our Fate of the Gods’ Quest Guide will give you detailed instructions on how to complete the quest successfully.

RuneScape, nowadays also known as RS3, is a widely popular fantasy MMORPG. It was launched in 2001 and is now one of the world’s longest-running online games.

There is a long list of quests for a game such as RS3 (no surprise there!): each belonging to different series in the game, and each having different levels of difficulty, story length, and membership requirement.

In this article, we are going to give you a guide on the Fate of the Gods quest, one of the Grandmaster quests. These quests are considerably high in difficulty, and they could take a long time to complete. But worry not, we’re here to help you out!

FATE OF THE GODS QUEST GUIDE

Fate of the Gods is the conclusion to the Return of Zaros subseries in the God quest series of RS3. The quest’s main goal is to help Azzanadra to bring his god, Zaros, back to Gielinor.

Without further spoiling anything more, let’s get on to the quest’s overview and requirements.

Go to the Eagles’ Peak – the easiest way to get there would be to use a lodestone. Once there, head directly south until you meet Azzanadra who will tell you about the quest. Accept the quest by picking the option [I’ll help if I can.] from the dialogue menu.

Azzanadra will further explain about the World Gate, a portal that can reach every plane in existence, and that he enlisted the help of Sliske to pull the portal out of the Shadow Realm. You need to solve a combination lock to activate the portal.

Head towards the World Gate, then click on the console in front of it—use it to plug in the combination lock to power the portal. Follow these steps:

Once the World Gate is activated, make the necessary preparations and then enter the gate once ready. 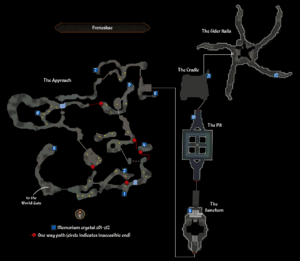 You arrive at The Approach after entering the World Gate. This is the most dangerous and largest area of Freneskae. Unless you’re wearing a face mask, you need to move quickly as the air is filled with deadly smoke, causing you to lose 50 life points every 15 seconds.

You will find Zaro’s Sanctum at the end of The Approach. At the other end of the room, you will find a door with symbols on it. You need to solve a relatively simple puzzle with three stages to open it—just rotate the panels on the door to match the symbols to light up the lines which are in-between the dials.

Fight with Nihils in the Pit

You must defeat four nihil creatures as you enter the room, each based on Ancient Magicks elements. Each nihil has a different combat style and special attacks and has no weakness.

Dying or escaping from the pit will only restore all nihils to full health.

Once the combat-heavy fight is finished, head north and open the unlocked door to emerge atop the volcano.

The Cradle of Mah

Approach the large sleeping figure, and climb down the cliff next to its left hand. A mysterious entity will appear telling you to stop—it’s none other than Zaros himself.

Zaros explains that the sleeping figure is Mah, an elder god. You will then enter the mind threshold where you can ask Zaros questions. Once you are done, speak to Zaros again and he will tell you that you have to defend against Mah’s nightmare after leaving the mind threshold.

Approach Mah to start the nightmare – it lasts a couple of minutes, in which you need to fight off Muspahs. Prayer and food are extremely useful in this part, and a beast of burden familiar is highly recommended.

Halls of the Elders

Once the nightmare is over, climb down the cradle opposite of where you entered. You will find several Mah wisps, which you will need to give Zaros a simulacrum which he will use to form his new body. If you wish to aid Zaros, give him a dark simulacrum. Otherwise, give him a light one.

Zaros will teleport you and himself away from Mah before he awakens and back to the entrance of World Gate. Head back to it after talking to Zaros.

Finally, the return of Zaros

Once you step through the World Gate, you will witness the return of Zaros from the Shadow Realm. Zaros then meets with his followers and gives them various assignments.

Regardless of your decision on the simulacrum, Zaros will reward you with a variety of things. After the quest, you are now also affiliated with Zaros, allowing you to communicate with him via a device in the Sanctum.

This quest centers around Death who has gone missing, and Icthlarin, the Menaphite god of the dead, who is attempting to take over Death’s role until he is found.

Fate of the Gods is very heavy on combat and tanking, so the skills requirements are actually pretty high.

A combat skill that is required for summoning familiars from the Spirit Plane using summoning pouches.

A support skill that gives the player terrain shortcuts around the whole RS3 gameplay. It also provides benefits to skills such as fishing, thieving, and hunting.

A skill that lets players gather Guthix’s residual life force leaking throughout Gielinor by getting divine energy and memories from wisps. The energy can then be used to make items such as portents, signs, and divine locations.

A support skill that is for members only. Receive assignments from Slayer Masters to hunt and slay monsters.

Combat skill is available for both free-to-play players and members. It allows players to cast different spells, utilizing the power of the runes.

This quest is heavy on combat, so we highly suggest you prepare for items and boosts to bring before you begin. It’s going to be a long journey, but the rewards you will reap will all be worth it! After all, this quest is one of the popular ones in the Old School Runescape.

There you have it. I hope our Fate of the Gods’ Quest Guide helped you!

Please also check out our other gaming articles like Back 4 Blood Tier List if you enjoyed this article.