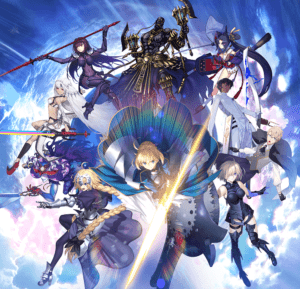 In this article we are going to give you our FGO Tier List.

Fate/Grand Order is one of the most popular turn-based RPG games that are out for mobile at the moment. There are millions of players around the world playing it, and the fandom for this game is extreme. It is based on the already popular anime, Fate/stay night. Many people started playing it as a substitute for the anime series, but the amazing visuals and deep story of the game quickly hook anyone who plays it.

In this game, you are a Master that summons Servants to help you in your battle. The game uses gacha mechanics to select servants from a pool of characters. This is where the problem begins. As with every game that uses gacha mechanics, there is a very wide variety of characters that can be summoned, each one with its unique abilities and synergies. That is what makes this game attractive, but also what makes it difficult since you will not know if the character you summoned is a servant worth investing in or one you should ignore.

This is where our tier list comes in. We have ranked all of the five-star characters in tiers, so you can see if they are worth picking up or not. What’s easier than that?

We are starting our FGO Tier List with the servants that are at the top of the game. Their abilities are matched by none, and they are dominating the meta at the moment. You have to consider yourself extremely lucky if you manage to summon a character from this tier. If you are that lucky, you should focus on building your team around these servants and getting the best gear for them. You will be glad you did it.

You might think that this tier is second-class servants, but you will be wrong. Just because they are not as strong as the S-Tier ones, doesn’t mean they can not do the job. On the contrary, they are some of the best units in the game that many of the highest-ranked people are focusing on. We have them on this tier because they are missing this OP characteristic. We wish we had a team full of these servants.

Ok, now you might not be as satisfied. We get it, they are “B-Tiers”. They are not as strong as the ones higher on this FGO Tier List, but they are sufficient if you want to go through the game’s content with a moderate amount of challenge. They are the characters that you can summon with a bit more consistency, and if you don’t consider yourself as a lucky person, you probably should settle with these. You can do better though.

Speaking about doing better, there are many characters on this tier that once were dominating the meta but now have fallen out of favor due to small changes in the game. These are your average servants that are just in the middle (while still being five-stars). They might work well as supporting characters for your main ones, but for the main part, you should try to aim higher than that.

Look, you have to start somewhere, no? This could be the name for this tier. You can see these characters as your first steps towards something great. Keep some of these servants just in case they fit perfectly in your team’s composition but don’t get too attached to them. They should be gone by the later stages of the game.

Imagine if you summon a five-star character, and it ends up being one of these ones. That is what we call being unlucky. Five-stars are already hard to summon, but it’s the ultimate disappointment when you summon one, and it is useless. We would recommend you to forget that you ever summoned these characters and go on with your life. Trust us, it’s better.

Who is the the strongest Servant in FGO?

Skadi is just a  Goddess of the Quick. Taking from her Scathach aspect, through Primordial Rune (Skadi) she grants any servant a massive 50% Quick up boost as well as boosting their Quick critical damage. If you build a quick team around her, that can deal damage, you are going to be surprised by how fast she can destroy her opponents. Many people are complaining that she is overpowered and for good reason.

Fate/Grand Order is a very complicated game that requires you to spend a lot of time to achieve the highest rankings. If that is what you are going for, you can make your first steps by studying our list. Of course, there is a lot of space for experimentation in this list. You might find combinations that make D-Tier characters look like gods. If you do so, then you are truly meant to master this game, and you should remember us when you are on the top. Enjoy the game and you will get better with time.