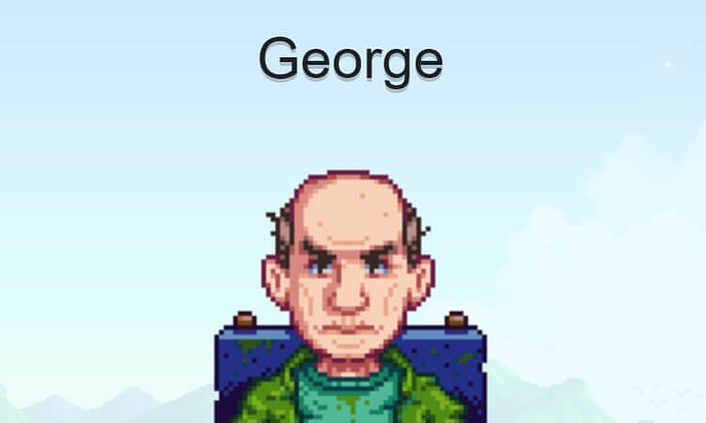 In our George Stardew Valley article, we’ll tell you everything you need to warm the heart of this grumpy granddad!

Stardew Valley has a colorful cast of characters, many of whom are quirky and lovable. Upon arriving in Pelican Town, your character’s met with cheery greetings and heartfelt welcomes. But not everyone is happy with your arrival. George, Alex’s elderly grandparent, doesn’t seem to care much. Not only that but he’s constantly grumpy and overall unpleasant. In fact, the very first thing he says to you is:

“Hmmph… It’s irritating to have to meet all these new people, huh? Name’s George, by the way. Now buzz off… Hmmph.”

So it’s no surprise that he’s one of the most underrated characters in the game. Yes, you read that right — underrated. Because despite the negative first impression, George is one of those characters that softens up over time. And as you progress through his friendship route, you’ll find that he starts acting more and more like a lovable grandpa. I highly recommend that you pursue his heart events, and our George Stardew Valley Guide should help you unlock them!!

George lives on 1 River Road with his wife, Evelyn, and his grandson, Alex. Because he can’t walk, he’s confined to a wheelchair and rarely leaves the house. Although on Saturdays, he goes to the small chapel in Pierre’s house to pray. And on the 23rd of every month, he and Evelyn go to Harvey’s clinic for a checkup.

George might seem like a stereotypical grinch on the outside, but after playing through his friendship route, I’ve realized that there’s more to him than meets the eye. Although George is prone to grumbling and complaining, he shows a softer (and sadder) side of him during his heart events. But that’s for you to discover! For now, let’s go through all the ways you can improve your friendship.

George will send you 35 Stone in the mail.

George will send you a recipe for Fried Eel in the mail.

(Spoiler warning!) When the player enters the house, they’ll see George trying to get something from the bookshelf. George can’t reach the item, so the player grabs it for him. After thanking the player, George tells them why he’s in a wheelchair.

When he was younger, George worked as a miner. And 30 years ago, he got into an accident while handling dynamite. The doctors told him that he’d never be able to walk again, so he started living his life in a wheelchair.

After telling his story, George thanks the player again for being nice to him, stating that it’s easy to forget that people care about you when you get old.

George will send you a recipe for Spicy Eel in the mail.

Admittedly, George doesn’t have as many heart events as other characters, especially when compared to his grandson, Alex. (Side note: We’ve also got an Alex Stardew Valley Guide. *wink wink*) But that doesn’t make him any less interesting. His sixth heart event explains why he holds so much frustration, while also showing the kinder, more appreciative side of him. Plus, his daily dialogue lines change depending on how many hearts you have with him. He goes from that grumpy welcome greeting to heartwarming lines, like:

“You know, I really have been a grumpy old man to everyone. But now I feel like I’m softening up like an old ripe fruit. Hehe! Take care, [son/hun].”

I swear, I smile every time he starts acting like a nice old granddad. So, if you want to try out George’s friendship route, head over to the Stardew Valley official website. You can download the game from there and read up on other character details. Good luck!