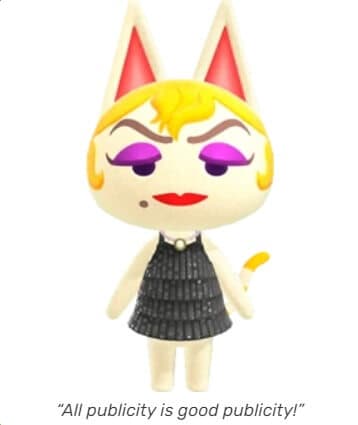 In today’s article, Monique Animal Crossing Guide, we will be talking about the cattiest character in the game that catapulted Nintendo Switch into immense popularity.

The past year has been rough beyond words. And because of this, many have turned to video games to keep the loneliness of social isolation away. It came to a point when online games are no longer viewed as vices but as the highly critical social lifeline that will make these trying times bearable.

Of the many games that helped us get through the past few months, one that achieved global popularity was Animal Crossing. Published and developed by Nintendo for their very own console, the Switch, Animal Crossing is a social simulation video conceptualized by Katsuya Eguchi and Hisashi Nogami.

In this game, you will find yourself in the shoes of a customizable human character who happens to be living in a village inhabited by anthropomorphic animals. What’s really great about this village is that all these animals can do and enjoy the same activities as you, making your whole stay in the village nothing but exciting.

Of course, like in any other town, you’d find lots and lots of people — in this case, animals — of varying personalities and characters. While some are agreeable and super easy to deal with, there are others who just seem disgruntled and discontent all the time — like Monique.

Who is Monique, you ask? She’s the snooty cat villager in Animal Crossing. Many think that Monique got her name (and prolly her attitude too, oops!) from the few actresses that go by the same handle. But actually, when you take a closer look at her, you’d see that she was heavily inspired by one of the world’s beauty icons whose name starts with ‘M’ as well.

Monique’s blonde hair, high brows, purple eyeshadow, in-your-face red lipstick, and noticeable beauty mark by the lip are very much reminiscent of the great Marilyn Monroe. In addition, some of her movements bear a resemblance to the pose Marilyn Monroe portrayed in the Pop Art piece by Andy Warhol.

To gain a better understanding of Monique, here’s a quick overview about her:

As I have already mentioned, Monique is very snooty-pretty-cat. Her favorite pastimes are putting on make-up and talking about other people’s lives. Because of this, it can be pretty easy to tag her as rude and arrogant. And while there is some truth to that, I think Monique is just the kind of person/animal who takes a long time to warm up to others. Once you get to know her, she’ll start confiding to you and talking to you about what she feels — all while still being a teeny tiny bit rude.

Like Carmen and all the other snooty villagers in the game, Monique makes a good consultant and mentor. To boot, her name actually means “adviser” in French, so do think about the things she says. Because of her personality, Monique finds it hard to get along with lazy and jock villagers, but she’ll thrive in a neighborhood filled with equally cranky villagers.

Staying true to her glamorous personality, Monique’s abode is decorated with the Lovely series. She has Ceramic Tiles as her flooring, the Groovy Wall as her wallpaper, and a stereo that endlessly plays K.K. Swing. Her sofa and dresser can come from the Regal Series if you are playing New Leaf. Some of the other stuff you’d find in her pattern-overloaded house are an Upright Piano, a Pink Velvet Stool, a Lady Palm plant, and Flower Table.

Monique may have the qualities that you wouldn’t want your newfound friend to have IRL. But, she continues to be an interesting character to meet while you are playing one of the most successful games at the moment. Finding a way to deal with snooty villagers will also be a piece of cake since write-ups like this Monique Animal Crossing Guide are all over the web.

So, the next time you see her on The Roost (which, according to some data miners, might finally come to New Horizons, fingers-crossed!), don’t be intimidated and strike up a conversation! If you enjoyed getting to know Monique through this article, you might want to know about some of the other characters in Animal Crossing, so just click here!