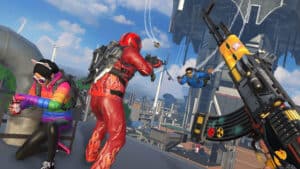 In our Oculus Quest 3: Oculus Updates, we’ll look at one of the strong names and top picks in the market of VR headsets—Meta Platforms (formerly known as Facebook Inc.) Oculus—, their latest VR headset offering Oculus Quest 2, and what we can expect to see in the near future (Is there going to be a Quest 3? A Quest 2 Pro, perhaps?).

Thanks to the leaps and bounds achieved by the latest technology, the gaming industry has never been more immersive. Virtual Reality is slowly but surely gaining a foothold in the gaming industry, and currently, gamers have already a variety of VR hardware options to choose from.

Oculus is a division of Meta Platform that is focused on creating virtual reality hardware, including the Oculus Rift and Oculus Quest series. Their latest VR headset offering was Oculus  Quest 2 which launched in October 2020. A little over a year later, it remains successful and strong on all accounts: it’s got a comfortable design for gaming, it’s cheaper than most VR headsets, and can be played literally anywhere since it’s wireless.

Let’s take a closer look at the Oculus Quest 2. Oculus dubs it as “an all-in-one headset filled with hundreds of unique experiences”, and of course they aren’t wrong! This VR headset off the bat comes with a variety of games to play. But it doesn’t stop there—Oculus Quest 2 makes it possible for you to sit front row at a live concert, exercise and burn calories with a virtual place that you prefer, hang out with friends all over the world, work, and even watch a movie! The best thing is that, Quest series is a budget-friendly headset, and that is definitely helping to bring VR to the masses.

Even at a relatively low tag price, it boasts of the next-level hardware that ensures you have the power and speed needed to experience only the best, an easy and safe way to set up, and a seamless connection to your friends through Facebook.

With the success of Oculus Quest 2, many fans and spectators are waiting to see what Oculus has to offer next. In an interview back in early 2021, CEO Mark Zuckerberg had already confirmed that they are already working on “what Quest 3 and Quest 4 are gonna look like”.

Fast forward to today, while there is still no official information on the release of the next generation of the Quest series, Meta did clarify that development is still underway for their budget-friendly VR headsets (which includes Quest) which is still good news.

There are also some rumors that are not-so-good news, including details shared back in April 2021 from supposedly key Oculus executives suggesting that its next device will be more likely to be an incremental Oculus Quest 2 Prod, instead of an Oculus Quest 3.

In addition to this, Meta’s vice president Andrew Bosworth said in a Twitter Q&A that Quest 3 is still “a little way off”. But eh, we’ll keep an eye and continue to hope that we see a 2022 Quest 3 release become a reality!

PROJECT CAMBRIA — THE NEXT GENERATION OCULUS

At the recent Facebook Connect, CEO Mark Zuckerberg announced and teased a first look at Project Cambria – the next-gen oculus. This is supposedly going to be Oculus’ high-end VR headset which they are planning to release in 2022.

With this recent news, many speculate that it’s not going to be an addition to the Quest lineup (Oculus’ budget-friendly series) and that this further pushes down the release of Oculus Quest 3 unfortunately.

Project Cambria will have cutting-edge and game-changing features that Meta cannot yet include in the Oculus Quest lineup. This includes eye and face tracking, which allows your virtual avatar to maintain eye contact and more accurately detect and reflect your facial expressions. Meta also added focus on “mixed-reality” experiences; with Cambria, the company claims that the new VR headset will have the capability to represent objects in the physical world with a sense of depth and perspective, providing a “higher-end” experience as compared to the Oculus Quest 2.

While there is no exact price announced yet, Meta did say that it will sit at the “high end of the price spectrum” and it should not be a surprise with all the exciting features that they have announced so far.

There is definitely more that we can expect and look forward to in the next few years from Oculus VR products – that much is already confirmed by everything we have heard so far from Meta.

At this point, all we really can do is to stay tuned and wait for the company to announce more information on the release dates, a final list of features and capabilities, and whether or not we’re going to break the bank to get them! If you’re a fan of VR or someone that is looking to experience it soon, if you decide to choose an Oculus product, you’d not be disappointed.