Taipei, Taiwan, August 22nd, 2016 – ASUSTOR Inc., a leading innovator and provider of network storage solutions, has announced that it will be releasing ASUSTOR Portal 2.0 today. All ASUSTOR NAS users using NAS models with HDMI ports (31, 32, 50, 51, 61, 62, 7 series) will be able to upgrade to this latest version. ASUSTOR Portal 2.0 provides users with an entertainment experience similar to digital TV set top boxes and features the new automatic grouping function that organizes the user’s installed Apps into groupings such as “All”, “Video” and “Social”. This allows users to quickly find the Apps they need. 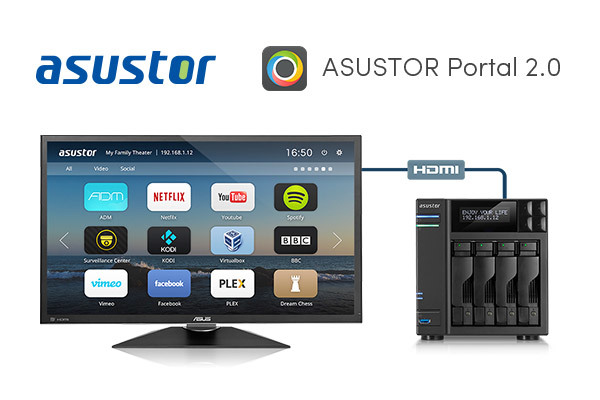 The original primary functions of a NAS were storage and backup. However, in recent times, consumers have begun to pursue high definition digital entertainment. With this in mind ASUSTOR has developed NAS devices using the most powerful hardware combined with a unique HDMI output and the in-house developed ASUSTOR Portal application. This significantly expands the local output function of NAS devices while giving users the ability to enjoy their high definition 2K/4K multimedia collections directly from the NAS.

ASUSTOR Portal is the base HDMI application on ASUSTOR NAS devices. After installing ASUSTOR Portal from App Central, users will be able to connect their NAS to any HDMI ready display (4K TVs, 4K monitors, etc.). Upon turning on the display, users will be able to view the ASUSTOR Portal interface which is similar to those found on digital TV set top boxes. In addition to pre-loading a shortcut to the ADM management interface along with Apps such as the Chrome Web Browser, Netflix and YouTube, ASUSTOR Portal also offers over 10 additional Apps that users can install according to their needs. These Apps include the Kodi multimedia player, Surveillance Center, VirtualBox, Spotify, BBC News, Chess, LibreOffice, FireFox, popular streaming multimedia sites and social media sites.

ASUSTOR Portal 2.0 supports 4K monitor resolutions and is able to display 12 App icons on its desktop. When needed, it also automatically creates new pages to display newly added Apps. Furthermore, the newly added default App groupings automatically organize the Apps installed by the user, allowing them to quickly find the Apps they are looking for.

How to get ASUSTOR Portal: