Taipei, Taiwan, November 30th, 2016 – ASUSTOR Inc., a leading innovator and provider of network storage solutions, has announced the launch of the Surveillance Center 2.6 Beta, introducing a variety of new professional surveillance functions which include the centralized surveillance software CMS Lite, unlimited storage capacity expansion with MyArchive cold backups, image restoration for fisheye cameras, the ability to shut off and turn on online cameras, more agile search options for finding recording files, and optimized exportation of recording files. Furthermore, the total number of cameras supported for each NAS series has been increased. With Surveillance Center 2.6, ASUSTOR truly redefines the meaning of an economical high quality video surveillance solution. This upgrade is available for all ASUSTOR NAS devices and can be downloaded from the Beta section of App Central. 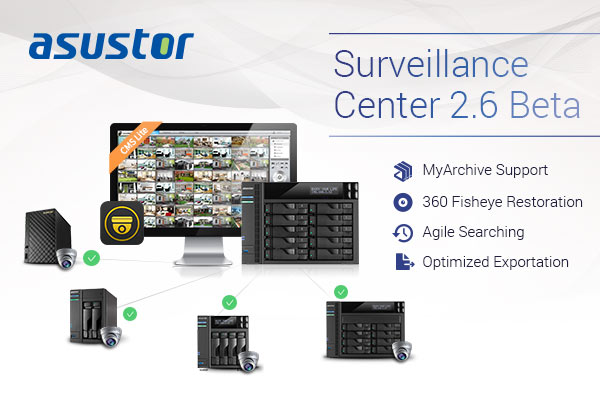 A solution designed for systems with multiple servers spread across different locations, CMS Lite allows surveillance professionals to have more flexibility and convenience when monitoring and playing back video. It can centralize management for up to 128 IP cameras and ASUSTOR NVRs in up to 32 different locations, significantly enhancing management efficiency.

Fisheye cameras have a wide angle view and can focus on areas such as offices, ATMs, retail stores, supermarkets, hotels, and factories, providing greater coverage than most common cameras. Surveillance Center’s image restoration function allows users to select a specified area, 180 degree panoramic view, or double 180 degree panoramic view restoration of a fisheye camera’s live video feed. This gives users the comprehensive surveillance without blind spots without having to use a multitude of cameras. Currently, Acti, Dahua and VIVOTEK brand fisheye cameras are supported.

Flexibly shut off and turn on online cameras

Using network streaming protocol to view surveillance feeds may consume too much bandwidth at times. For users who wish to temporarily power off specific cameras, this function can be used. All camera settings will be maintained when the camera is shut off, allowing users to turn on the camera at any time with all settings and configurations intact.

In addition to being able to increase the playback speed of recording files, this version of Surveillance Center features newly added 30 second fast-forward and 10 second rewind playback functions allowing users to conveniently find the recording files they need.

The new function allowing recordings to be exported to local folders on the NAS significantly enhances the speed of the exporting process.

About the Surveillance Center 2.6 Beta: http://www.asustor.com/betaNVR/beta2_6

About ASUSTOR
Founded in 2011, ASUSTOR Inc. was established via direct investment from ASUSTeK Computer Inc. The ASUSTOR brand name was created as a portmanteau of “ASUS” and “Storage”. ASUSTOR is a leading innovator and provider of private cloud storage (network attached storage) and video surveillance (network video recorder) solutions, also specializing in the development and integration of related firmware, hardware and applications. We are devoted to providing the world with unparalleled user experiences and the most complete set of network storage solutions possible.