iConnect has a Lightning interface that can be plugged into an Apple device directly – Now available in the U.S.

September 8th, 2015 – Taipei, Taiwan – Foxlink, PQI, the world’s leading brand in peripheral storage accessories for portable devices is proud to announce the ultimate storage solution, the iConnect. It seems that almost everyone eventually runs out of space on their iPhone, iPad or iPod, whilst there are multiple ways to solve this problem, there’s nothing better than simply having more space. The iConnect is an Apple certified Lightning interface flash drive that can be plugged directly into an iOS device to store photos, music, movies and to back up contacts. With the iConnect, you will no longer have to go through your phone deleting old memories or trying to figure out which app you can live without. Available in the U.S. this September, the iConnect will give you enough space so you never miss the next photo or video opportunity. 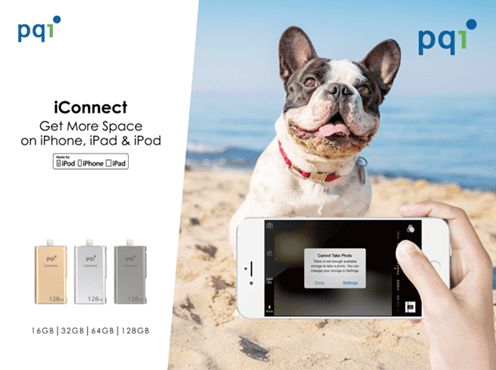 Increasingly people are using iPhones for photo and video capture, even outright replacing traditional cameras and video cameras. Everyone wants to keep those memories but the storage space on the iPhone seems to never be enough. With PQI’s iConnect you have an easy solution. Coming in four capacities, giving you an economical solution to getting more space and it even lets you file sharing without connecting onto Wi-Fi or use iTunes. So when you’re on vacation with your buddies and need to share the thousands of photos you took, all you need to do is plug in the iConnect.

The iConnect can store large volumes of photos, music, movies without taking up any space on your iPhone, leaving enough storage to download more Apps and take more photos. The iConnect can provide you with entertainment even when you’re offline! So the next time you’re going on a long-haul flight, you can upload all your favourite music and videos and play them on your iPhone, iPad directly using the iConnect.

Storing and transferring large volumes of data like photos, videos and music can often take some time. PQI creates the ultra-speed and high efficiency iConnect dual flash drive (Lightning read 30 MB/sec, write 15 MB/sec) that allows users to easily backup their data in iOS devices or share files. In addition, iConnect has adopted the USB 3.0 technology, which is 5 times faster during computer data transmissions compared to USB 2.0.

Backing up and restoring contacts has never been so easy, one of iConnect’s features is allowing you to backup and restore your contacts. When you buy a new phone or if you’ve lost your old one, all you have to do is plug in the iConnect to restore all your contacts. What’s more, the iConnect also offers the ability to encrypt and compress single or multiple files. As you will be carrying your iConnect around with you, we know the importance of your privacy in case it gets in the wrong hands so the iConnect allows you to lock single or multiple files using a single encryption password. As well as this, the iConnect can back up efficiently by compressing the files, leaving you with even more space to store data.

The iConnect comes in 3 metallic colors, gold, silver and gray to match your iPhone and iPad with a two-year limited warranty.

The iConnect+ App is available on the App Store for iPhone, iPad and iPod touch.

More information about iConnect can be found at: http://www.pqigroup.com/prod_in.aspx?mnuid=1286&modid=138&prodid=1230