The CFast Pro is one of Super Talent’s highly popular flash media card solutions for consumer and commercial media storage.  Previously, Super Talent only offered the CFast Pro up to 128 GB.  Now, with the increase of capacity to 256 GB, users can now record even more data, photos, and longer movies at the highest quality settings for project needs.  For those seeking high performing flash media cards at a competitive price with high reliability, the CFast Pro from Super Talent is here to fit those needs. 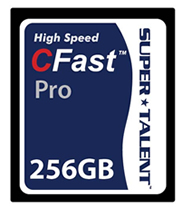 Super Talent also provides a compatibility chart for these cards for those unsure if the CFast Pro cards will work with existing equipment.  Those using high end cameras from ARRI and Blackmagic Design can take full advantage of CFast cards available on the market today for their media needs.

About Super Talent Technology
Super Talent Technology Corporation based in San Jose, California, designs and manufactures flash based SSD and USB storage devices for computers and consumer electronics. An ISO 9001 certified company, Super Talent utilizes its state—of—the—art factories and leading-edge components to produce award winning products with outstanding reliability. Super Talent is an active member of the JEDEC and ONFI. With over 200 patents, the company was ranked in the top 50 of the Wall Street Journal’s Patent Scorecard ™ for the IT industry three consecutive times.