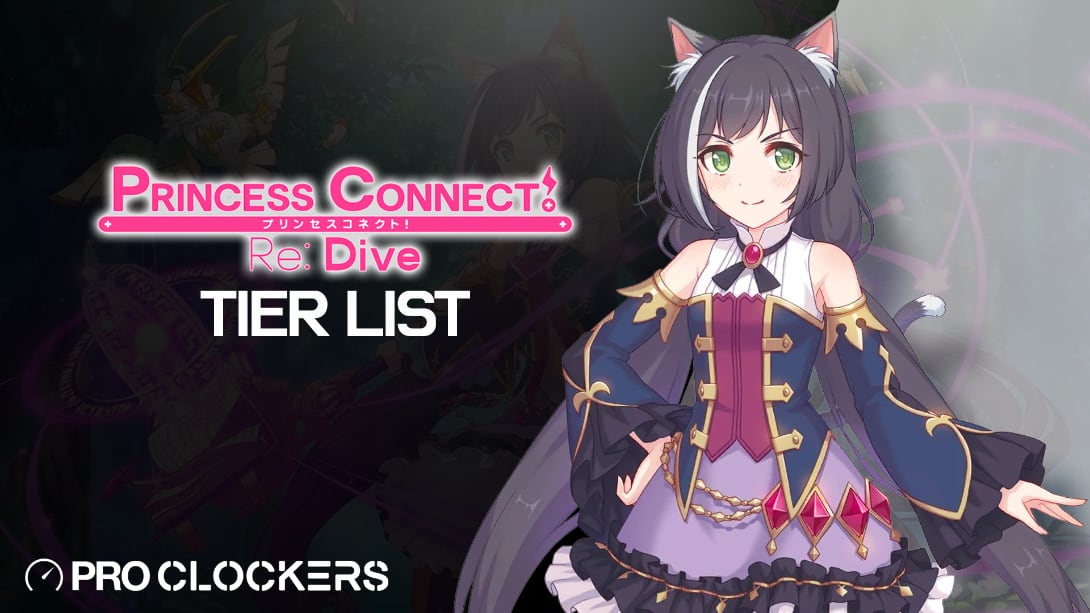 For our Princess Connect Tier List, we’re listing all your favourite girls from the guilds of Landsol.

We added personal details, skills, strategies, and tips for all s-tier characters in this update. We also added a new section explaining all character roles.

Princess Connect! Re: Dive is a Japanese RPG gacha game that features the cutest (and deadliest!) cast of playable characters. Its real-time mechanics and various modes make it a challenging game that spurs players to strategize. Like other tactical games, each princess plays a role in either of these three positions: Frontline, Midline, and Backline.

Plus, the game’s vibrant colours and ever-expanding cast make it all the more appealing. So, its huge fan following comes as no surprise.

In fact, Princess Connect! Re: Dive has grown so popular that it’s spawned a manga series and an anime adaption. Some of the characters even featured as guests in games like Granblue Fantasy and Dragalia Lost. But for this Princess Connect Tier List, we’re focusing on the main game and ranking each playable character.

Now without further ado, let’s get into the tier list!

With more than 60 different playable characters, Princess Connect! Re: Dive has a sizable roster to choose from. For this Princess Connect Tier List, we’re ranking each character based on their overall effectiveness. The five tiers are as follows: S, A, B, C, and D. We’ve also categorized each character based on their team placement. Finally, take note that since the game has multiple game modes, different characters may fare better in specific modes. As the player, it’s your job to strategize and create the most efficient team combinations based on your available characters.

A-Tier characters are effective in their respective roles but aren’t nearly as versatile as those in S-Tier. Despite this, they’re still great picks for your team.

B-Tier characters tend to be more situational, meaning they fare better in specific game modes and perform poorly in others. Even then, they can be extremely powerful when placed in the right team and under the right circumstances.

C-Tier characters are even more situational than B. Their highly specific skill set and weaker stat allocation render them useful only in certain situations. They’re only efficient when the player knows when to use them.

D-Tier ranks are the most situational characters. And even then, they’re rarely useful for any game mode. Either their skills don’t bring much to the table or their stat allocations aren’t as optimal, even when maxed out.

Get a cup of coffee and get ready for more reading as we’ll dig in with all the strategies and personal info of all S-Tier characters on the next page.

With the main Princess Connect Tier List out of the way, you’re going to need to know how to navigate our top picks.

We’ll be laying down all info, skills, and some valuable tips in using Akino, Muimi, Shizuru, Labyrista, Neneka, Saren, Hatsune, Luna, and Rino.

So, here’s everything you need to know about our S-Tier characters.

Frontline characters are usually those with high defensive stats. We want them to have high defence because these characters will absorb most of the attacks and are the first to be targeted by opponents. They’re also vulnerable to cleave attacks.

Akino, the beloved guild master of the Mercurius Foundation, is a woman of riches. But even with all the money in the world, she can’t seem to travel without getting lost. Luckily, she has her sparkling helicopter to take her wherever she wants. Fans of the series love her for her air of regality that comes with a touch of clumsiness. What do you expect from someone who was born in luxury?

The self-proclaimed “Greatest Villain in the World” is actually a sweetheart. Despite her supposed title, Muimi’s friendly and cheerful to friends and enemies alike. And despite a dark past, she manages to take the world on with a smile. Long-time fans who were waiting for her to become a playable character weren’t disappointed, so her S-tier spot comes as no surprise.

Shizuru is the big sister everyone’s always wanted. She’s loving and caring, but also isn’t afraid to reprimand those who deserve it. Players enjoy both her godlike power and her gorgeous character design. And who can blame them? It’s hard not to appreciate your big sister who’s always going to protect you.

Next are all the details, skills, and strategies for all the midline S-tier characters in our Princess Connect Tier List.

Midline characters are those that have a balanced stat distribution. They act as support or secondary line of defence when the frontline fails.

Though not much is known about Labyrista, AKA Akira Mosakuji, players love her because of her familiar voice. Labyrista is voiced by none other than Miyuki Sawashiro, who’s played memorable characters from anime like Angel Beats!, Kakegurui, and Sword Art Online. She’s also a great support character.

“God-tier character,” one commenter says on the Princess Connect wiki. That’s pretty much an accurate description of Neneka Utsushimi. The former guild master of Kaleidoscope may be petite, but she’s a powerhouse ready to take on any enemy. I mean, we put her in S-Tier for a reason.

Coming from a poor background, Saren understands the value of money and is keen on spending it wisely (unlike a certain character in S-Tier). Because of this, she’s a fierce financial negotiator and carefully plans out her expenses. Currently, she owns an orphanage, where she loves each one of her children. Her practical nature and straightforward personality make her an easily lovable character.

Next are all the details, skills, and strategies for all the backline S-tier characters in our Princess Connect Tier List.

Backline characters are usually the strongest and the team’s primary healers but have extremely low defensive stats and will die if single-target abilities hit them.

Hatsune is more than just a playable character. In the lore, she also has telekinesis and teleportation powers! Although, she opts to hide it from the rest of the world. Still, even without her superpowers, the fans love her for her cheerful personality and energetic nature. Not to mention, her mannerisms are humorous (but weirdly adorable).

Luna is actually a guest character who originates from the Shadowverse. It’s another game by the same developer! But even though she comes from another game, the creators put a lot of thought into her Princess Connect character. You should have seen that coming since she’s in S-Tier, after all. Fans love her for her mysterious nature and adorable design!

Ex Skill: Will you be my friends?

Based on her dialogue, Rino seems to be really close to her big brother. (I bet some players wish they were as close.) With her trusty bow, she can cause massive damage. And all that while being cute! Like Labyrista, she’s got a pretty renowned voice actor, Kana Asumi. She’s voiced memorable characters from Nisekoi, Angel Beats!, and Working!!

Continue to read on as we’ll explain all things you need to know about character positions or team placement.

What are Character Positions in Princess Connect?

Each princess in the game fits in one of the three positions: Frontline, Midline, and Backline. When building your team, have a good mix of attackers, tanks, and support units to maximize efficiency.

Frontline
Frontline characters have a high defense stat and are proficient at melee attacks. They’re in charge of shielding the rest of the team from oncoming damage.

Midline
Midline characters tend to have a balanced stat distribution. This means they can work as either melee or ranged attackers. Some also have useful support skills to buff the rest of the team.

Backline
Backline characters are glass cannons. They have an extremely high potential for damage output, but low defense. So, while they can deal massive damage to enemy teams, they need plenty of protection from your own.

On the next page, you’ll learn all things you need about character roles.

And now that you have a general idea of the best kinds of characters, you’ll need a thorough understanding of character roles in order to build the best team.

What are the character roles in Princess Connect?

As the name implies, Physical Attackers are playable characters that rely primarily on damaging enemies with swords, bows, or other similar weapons. These units are usually stationed in the Frontline. Others take the Backline when they make use of bows.

Just like Physical Attackers, Magic Attackers are primarily damage dealers. Though the difference here is that they don’t rely on swords or bows, but magical staffs and spells. These units are more often found in the Midline or Backline. Just be wary when assigning them to your team, as they tend to have lower Defense.

Tankers work as shield units. They may not be as damage-heavy as the first two classes on the list, but they have high Defense. This makes them ideal for protecting weaker characters. But don’t write them off in terms of damage. Many Tankers have skills that deal high damage when used at the right time.

Supporters, otherwise known as Buffers, are best at giving boosts to your unit’s stats. Supporters are varied as different characters buff different stats. Some are great for upping your team’s Physical Damage and Crit Rate, while others are more suited to boost Defense.

The opposite of Supporters, Debuffers help your team by whittling down the enemy team’s stats. This can include decreasing their Attack, Defense, and etc. Putting together a decent Supporter with a matching Debuffer can multiply your damage by a huge amount, making it easier for you to get that win!

Lastly, we have Healers. A self-explanatory role, Healers make sure your team’s HP stays at a safe level. They’re especially useful against enemy teams with his Attack potential. Pair them with a few good Supporters, and you’ll be set!

Princess Connect! Re: Dive is a fantastic gacha game with unique character skillsets and balanced mechanics. Don’t let the cutesy style fool you! If you want to win, you’ll need to do a lot of planning and investing. In that regard, our Princess Connect Tier List should give you a good idea of the characters you should focus on. And even if you just want to play to have fun, the lovely cast is more than enough to keep you engaged. Similar to other gacha games, like Fate/Grand Order and Genshin Impact, the appeal of Princess Connect! Re: Dive comes hugely from its playable characters.

If you enjoyed this list, check out our other tier lists:

Who’s your favorite Princess Connect character? Leave a comment below.