All performance testing was done with an i9-7900X and RTX 2080 at default clock speed. CPU was left with Speed Step and Turbo Boost enabled. The only setting changed was enabling XMP memory settings in the BIOS. Games were run at a resolution of 1920 x 1080 and higher settings enabled as noted. ASUS’s MCE was disabled.

PCMark 10 is the complete benchmark for the modern office. It is the ideal test for organizations that are evaluating PCs for a workforce with a range of performance needs. The tests in this benchmark cover a wide range of activities from everyday productivity tasks to demanding work with digital media content.
PCMark 10 uses a modular approach to build relevant benchmark tests around common end-user scenarios. A Test Group is a collection of workloads that share a common theme or purpose. There are four test groups in PCMark 10, we use three of them.
Essentials: covers the common, everyday ways that people use a PC. The workloads include Web Browsing, Video Conferencing, and App Start-up time.
Productivity: measures system performance with everyday office applications. This test group includes Spreadsheets and Writing workloads.
Digital Content Creation: This test group’s workload reflects the demands of working with digital content and media. The tests include Photo Editing, Video Editing, and Rendering and Visualization. 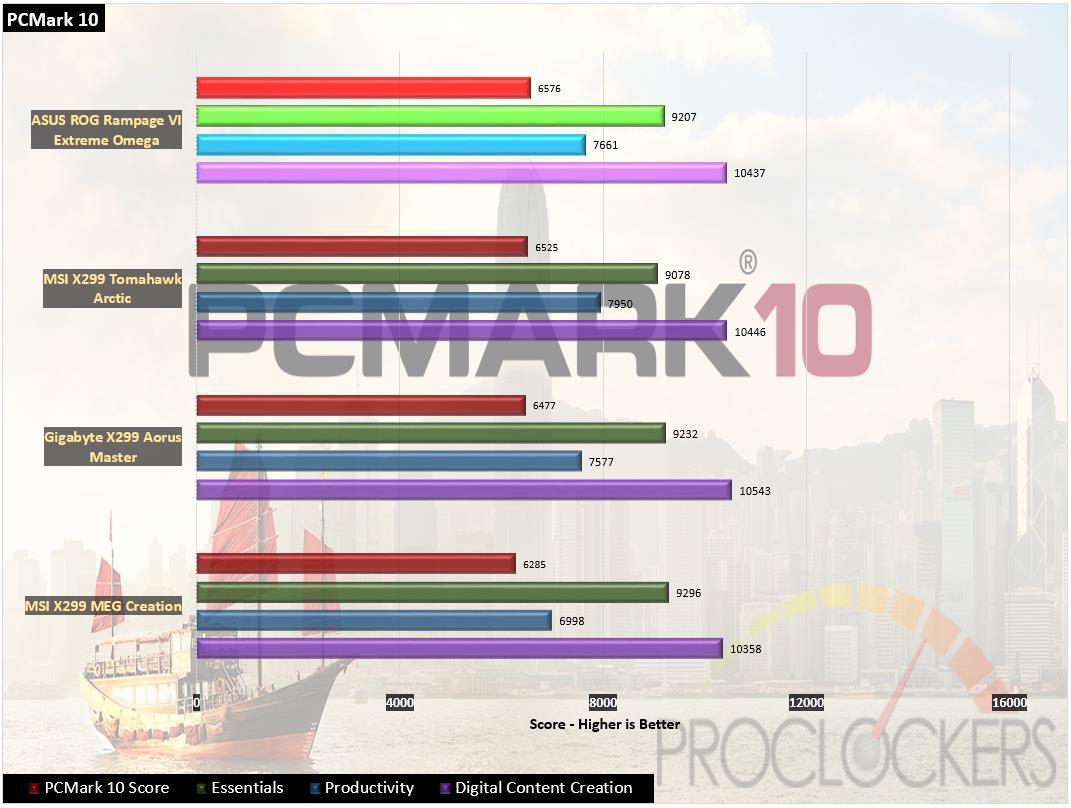 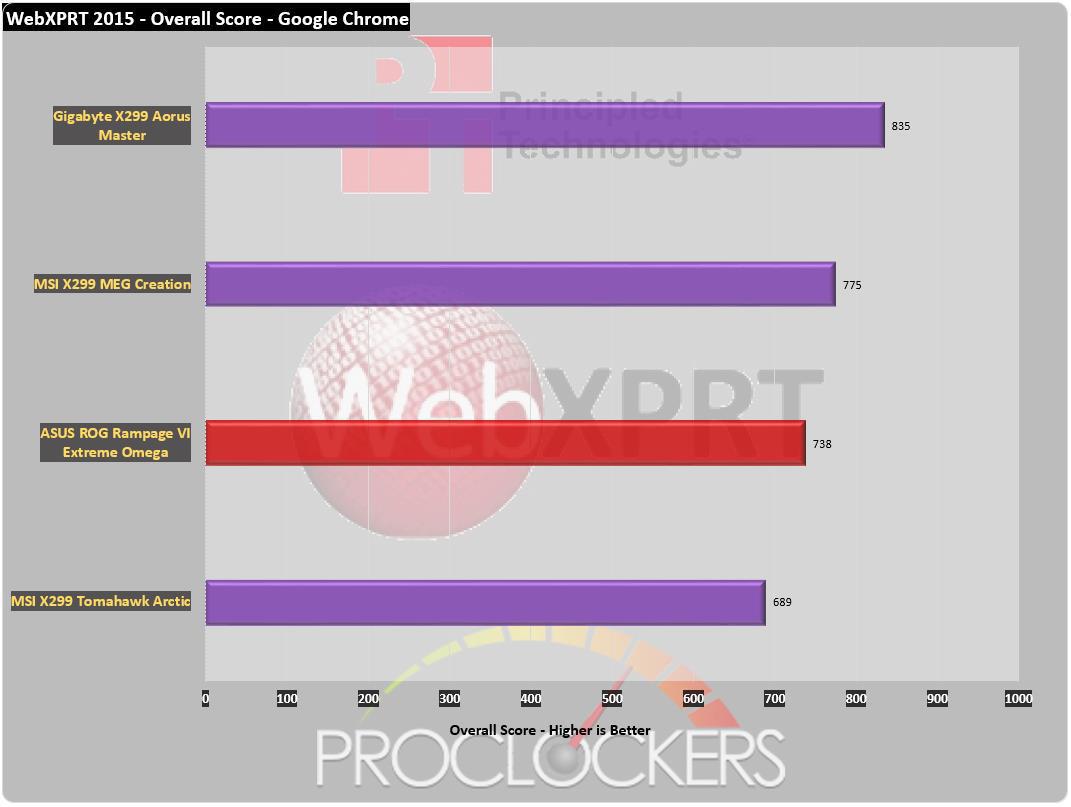 Our browser-based test comes in a little lower but still does well with a score of 738 +/- 15. 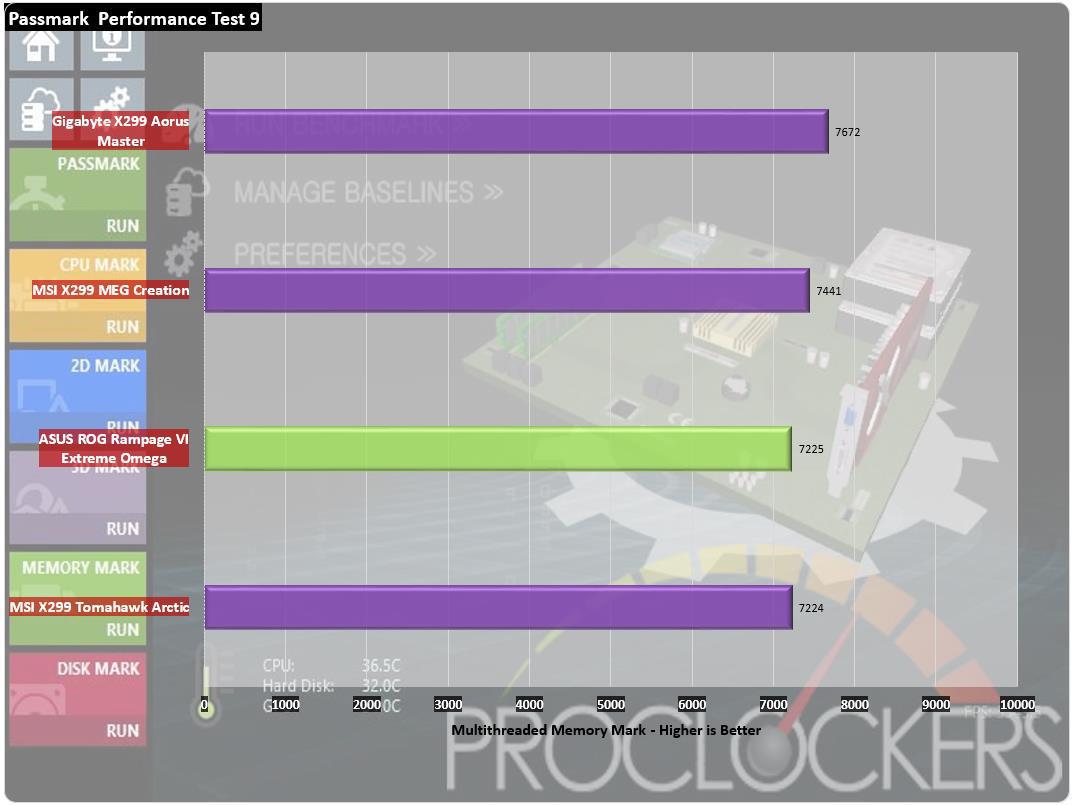 Passmark Performance Test 9 calculates a score of 7225 which puts it in 3rd place overall. 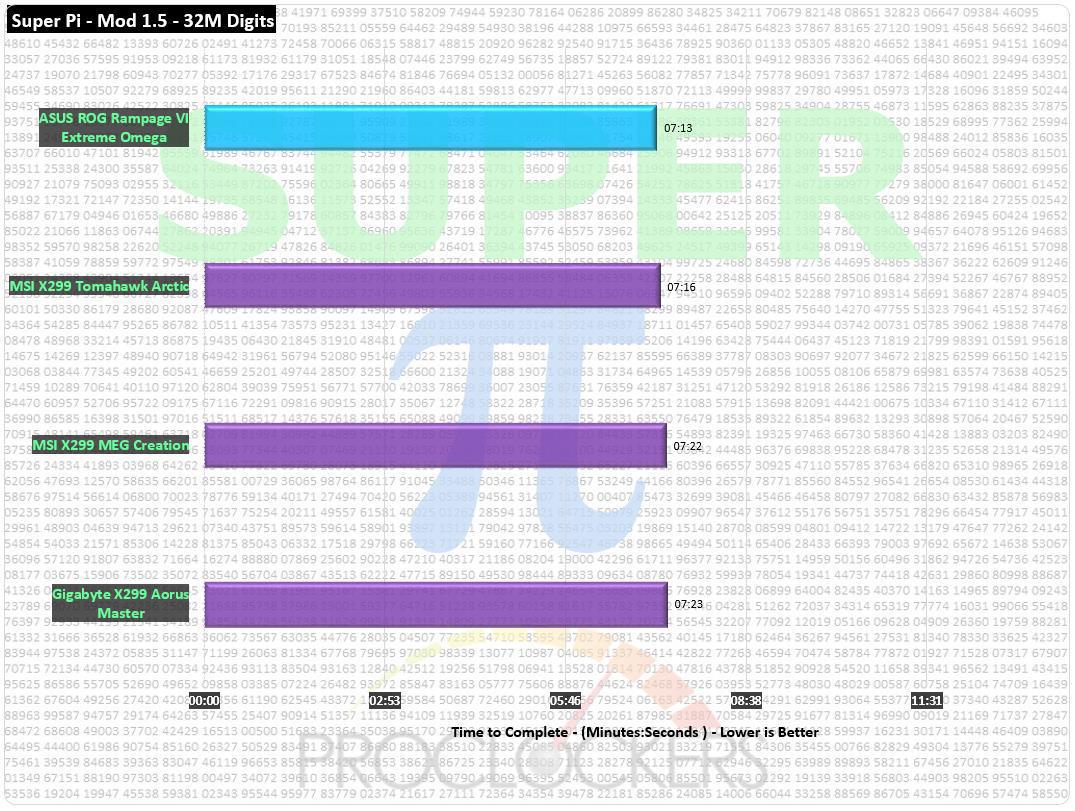 With a single thread in play solving for Pi, the Omega does all 32 million digits in 7 minutes and 13 seconds, quite a bit faster than other similar systems. 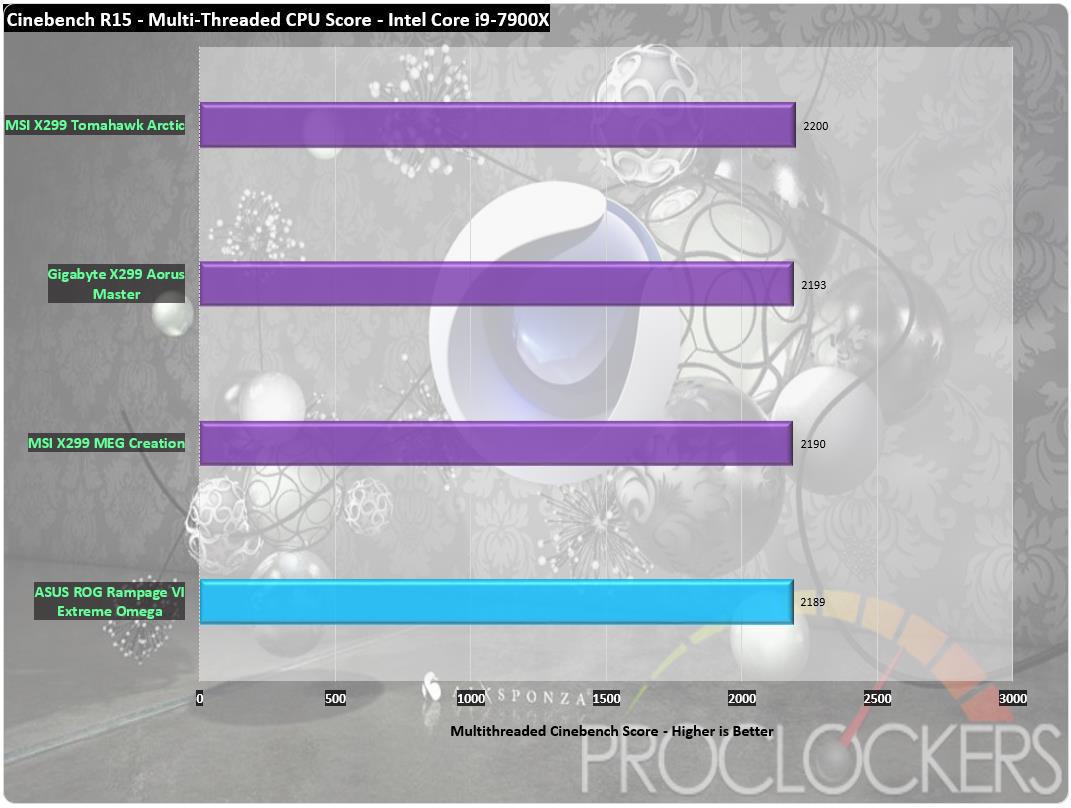 With all cores in play, the Omega scores 2189 points in Cinebench, just 11 points behind the leader.

The benchmark shows a rating of MIPS (million instructions per second). The rating value is calculated from the measured speed, and it is normalized with results of Intel Core 2 CPU with multi-threading option switched off. So if you have modern CPU from Intel or AMD, rating values in single-thread mode must be close to real CPU frequency. There are two tests, compression with LZMA method and decompression with LZMA method. Once the total passes reach 20 or more, the score is taken. 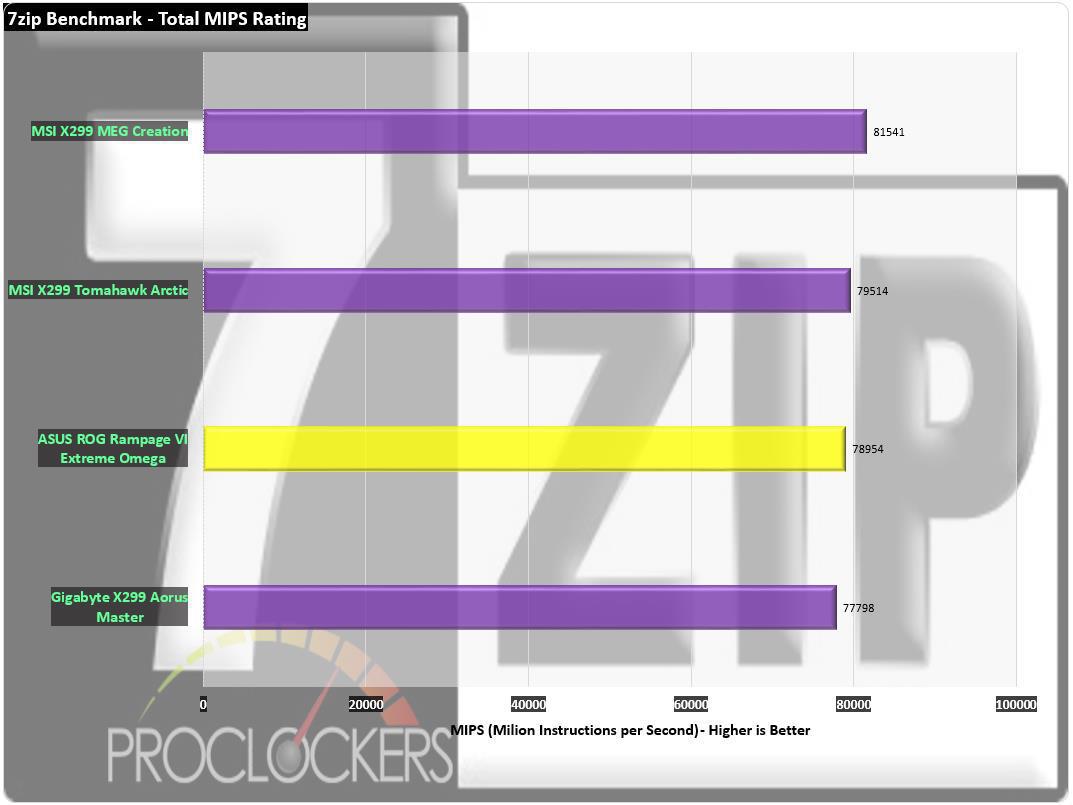 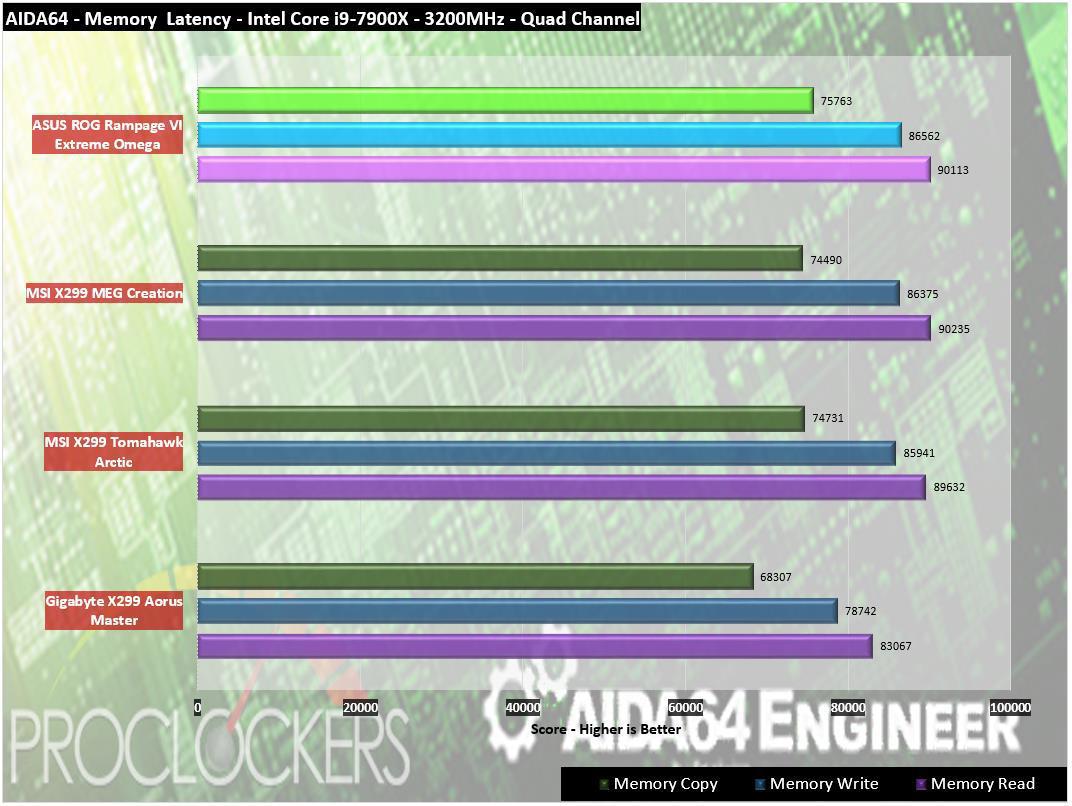 Memory bandwidth comes in at over 90GB reads, 86GB writes and 75GB for copy functions. 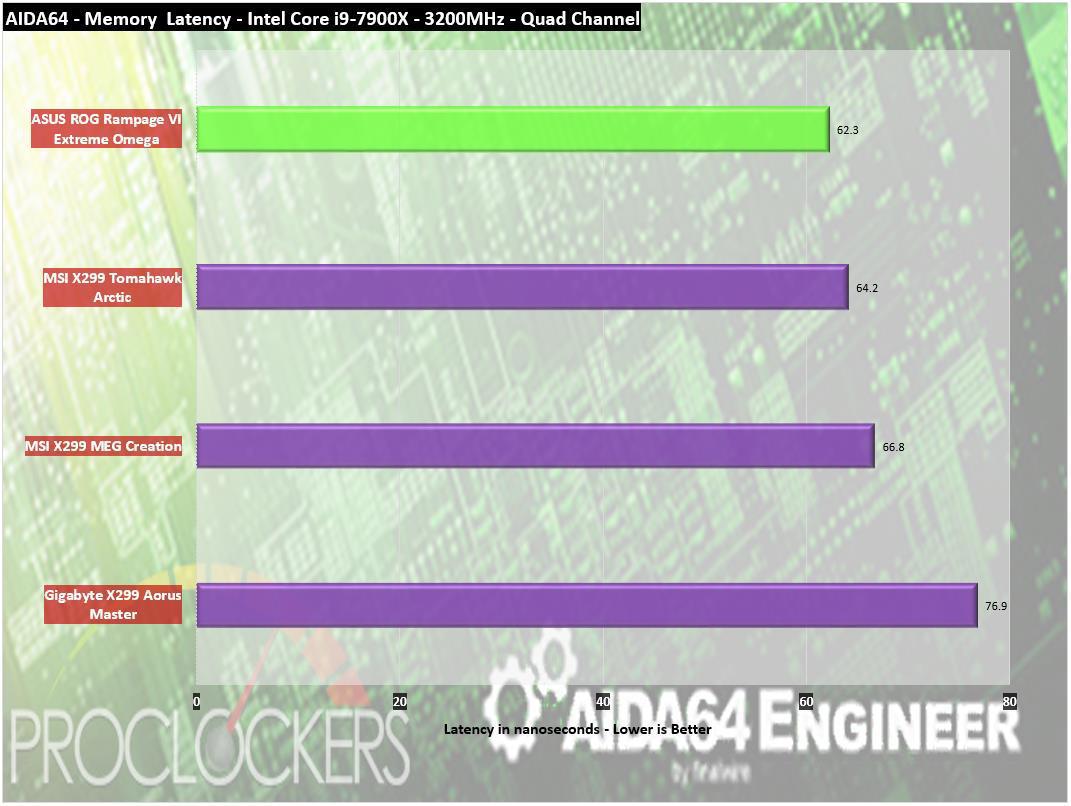 Latency comes in at a class-leading 62.3ns. 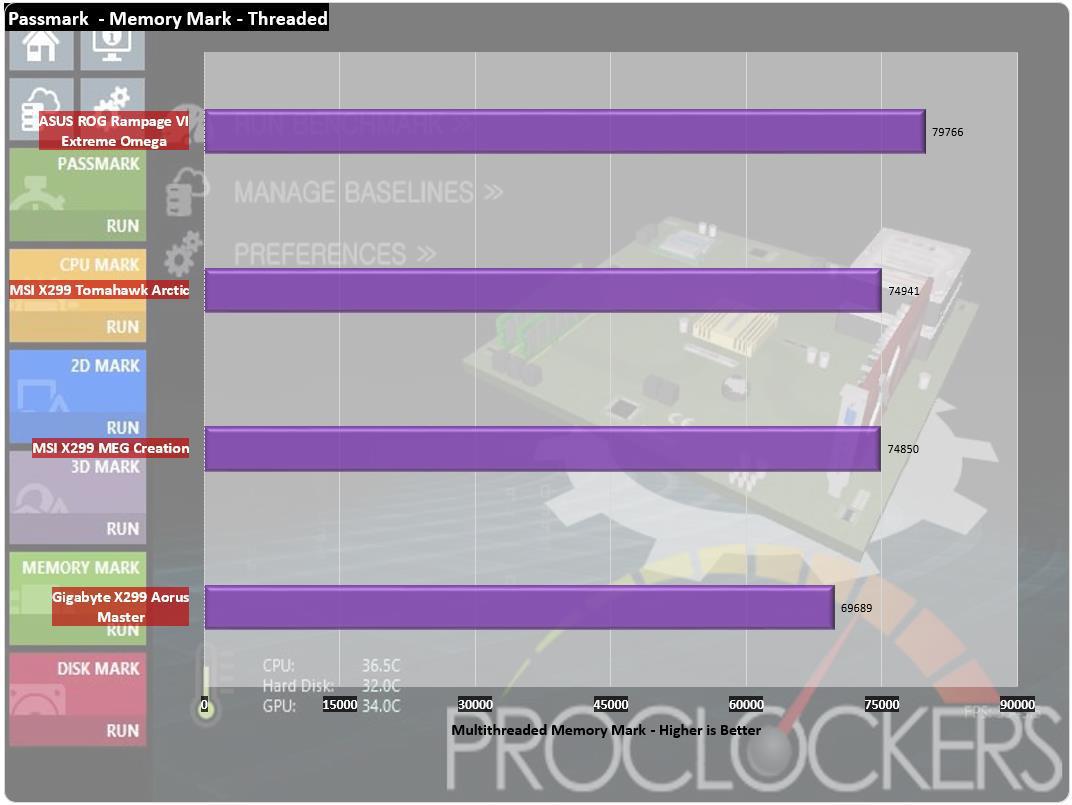 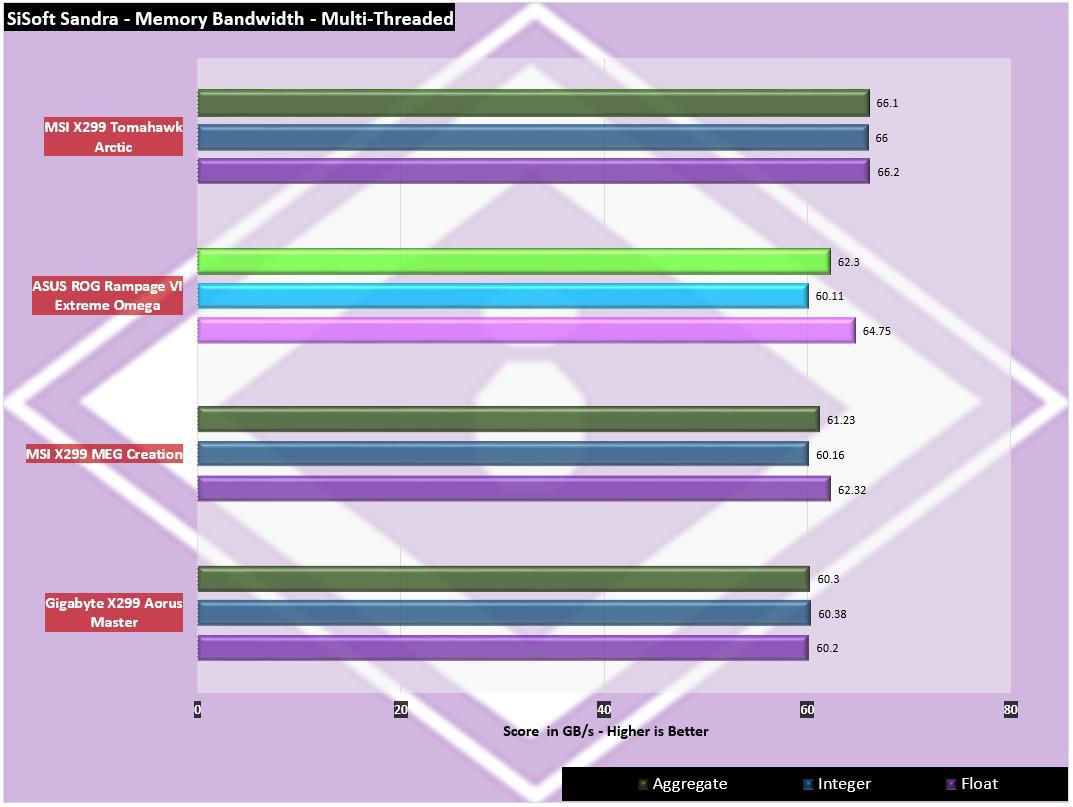 SiSoft comes in at nearly 65GB/s float, over 60GB on Integer and over 62.3GB/s on aggregate. 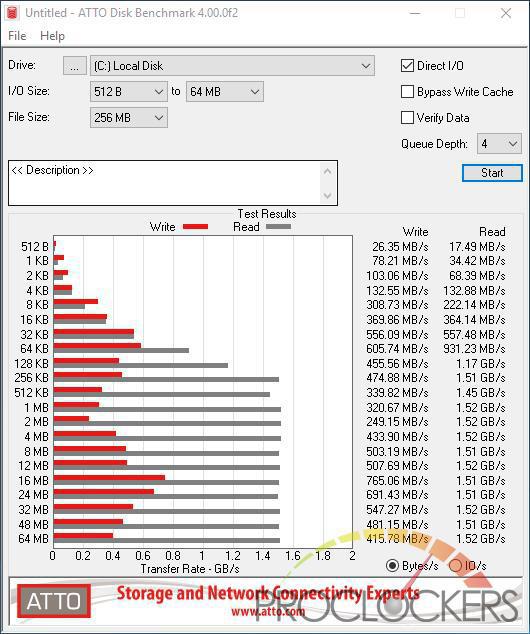 Atto shows our Toshiba RC400 480GB M.2 drive hitting its read speeds easily but writes come in a little slow thanks to a very full drive. 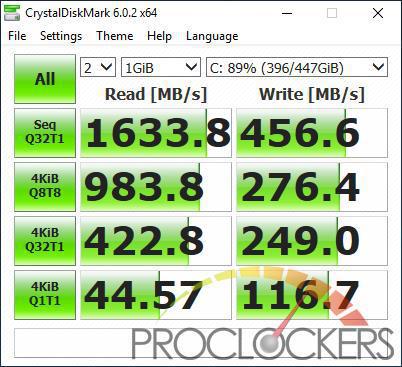 CrystalDiskMark actually comes in a little above rated read speeds, but our full drive is really taking a hit through no fault of ASUS’s.

The synthetic tests determine the sequential and random read and write performance of the SSD. These tests are performed without using the operating system cache. In the sequential test, the program measures how long it takes to read and write a 1 GB file. In the 4K test, read and write performance is determined for randomly selected 4K blocks. The 4K-64 Third test is equivalent to the 4K procedure, except that the read and write operations are distributed to 64 threads. This test should show differences between the IDE operating mode where NCQ is not supported and the AHCI mode for SSDs with Native Command Queuing (NCQ). The additional compression test can measure the performance of the SSD as a function of the compressibility of the data. This is especially important for the controllers that are used to increase the performance and life of the cell compression. 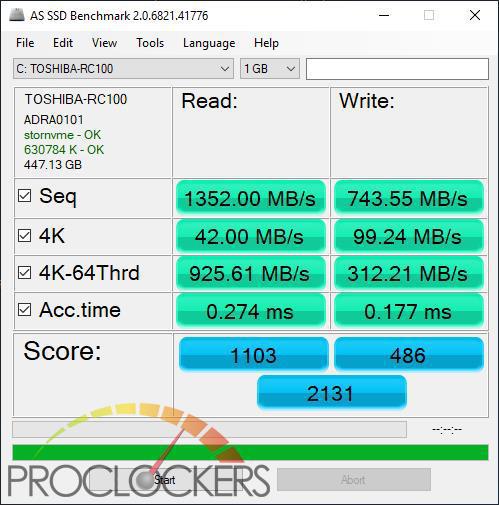 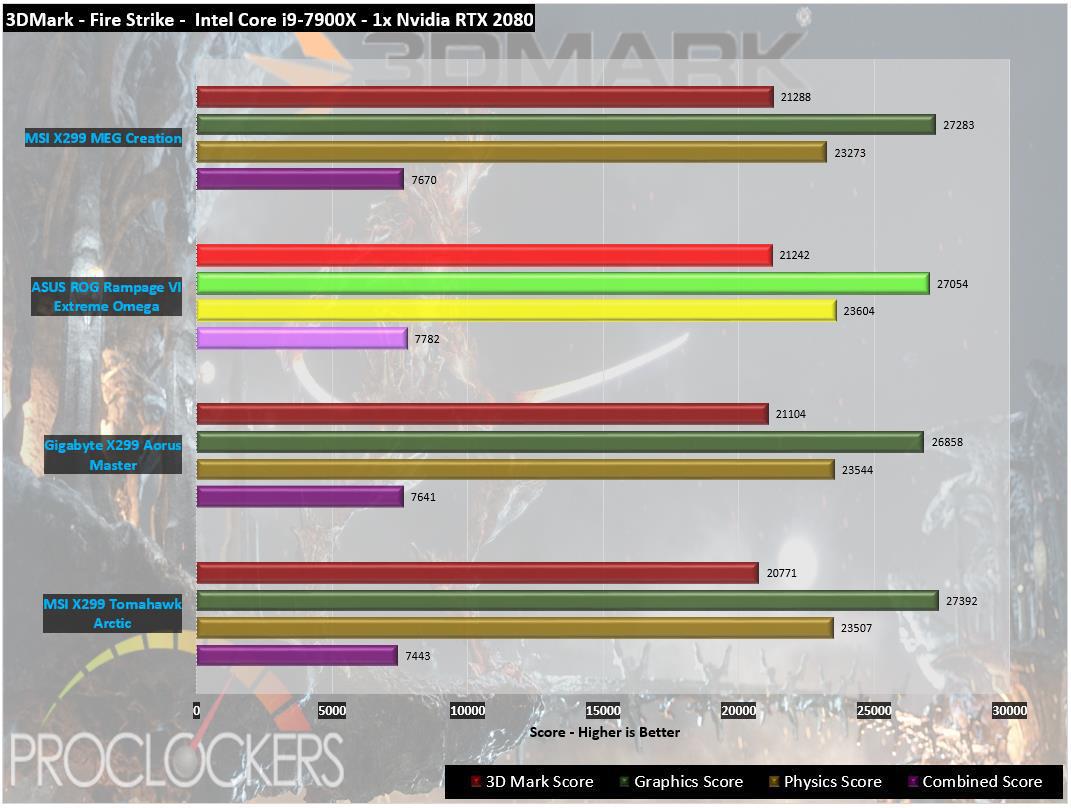 ASUS usually does well in the gaming category with its ‘Republic of Gamers’ platforms, the Omega is no different and does well in Firestrike. 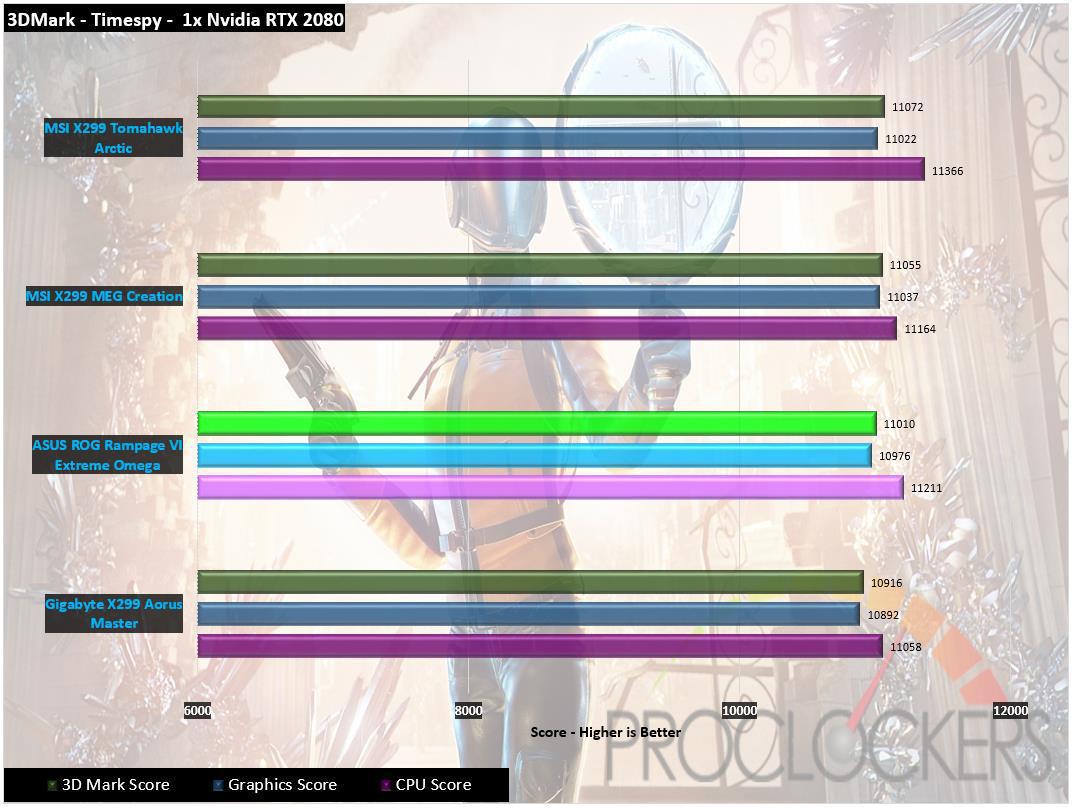 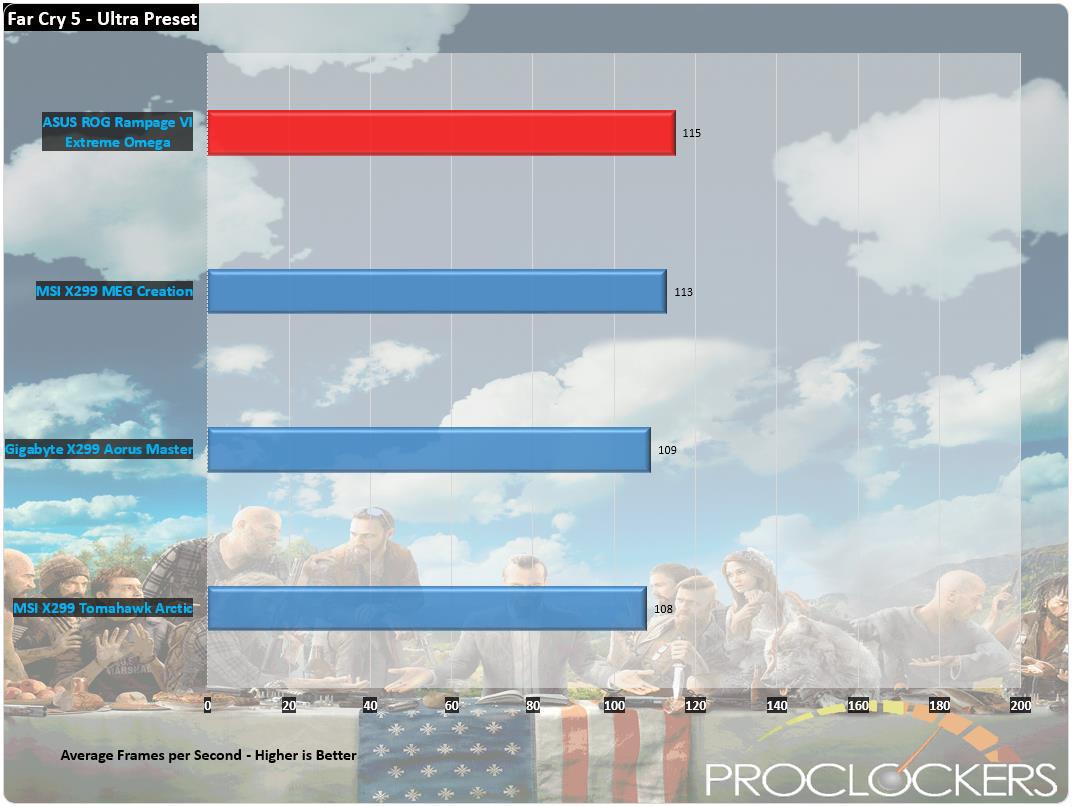 Middle-Earth: Shadow of War
In the epic sequel to the award-winning Middle-earth: Shadow of Mordor, go behind enemy lines to forge an army, conquer Fortresses and dominate Mordor from within. Experience how the award-winning Nemesis System creates unique personal stories with every enemy and follower, and confront the full power of the Dark Lord Sauron and his Ringwraiths in this epic new story of Middle-earth. 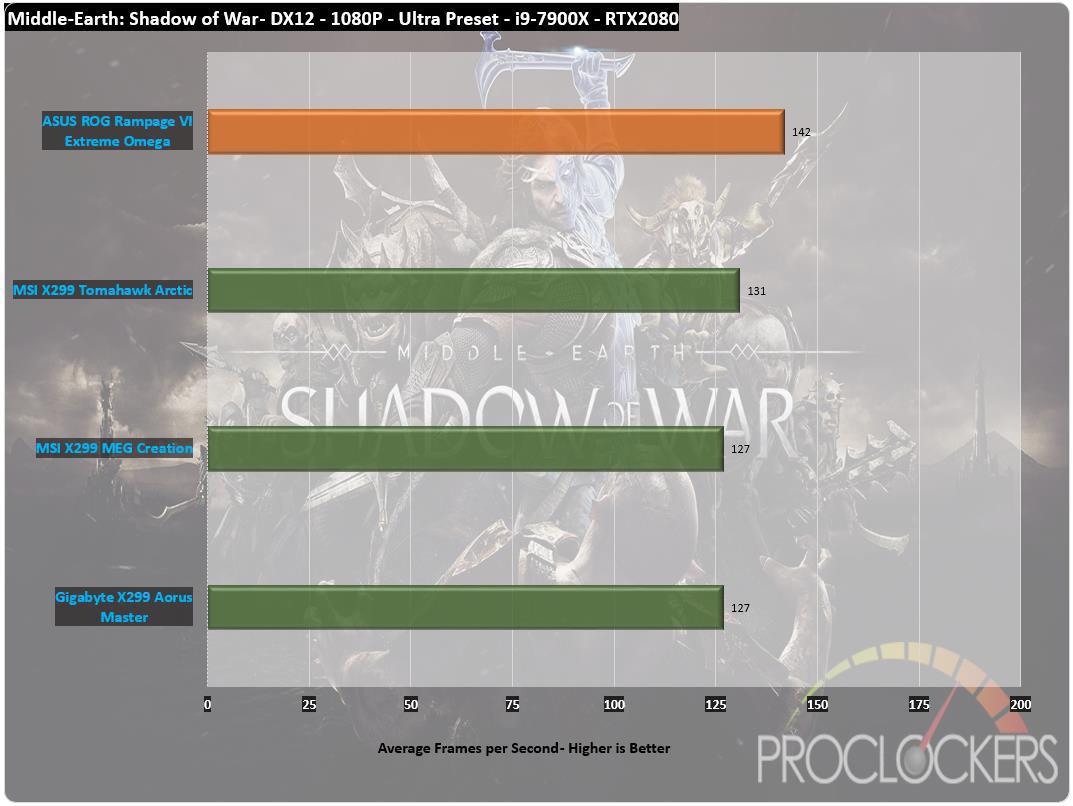 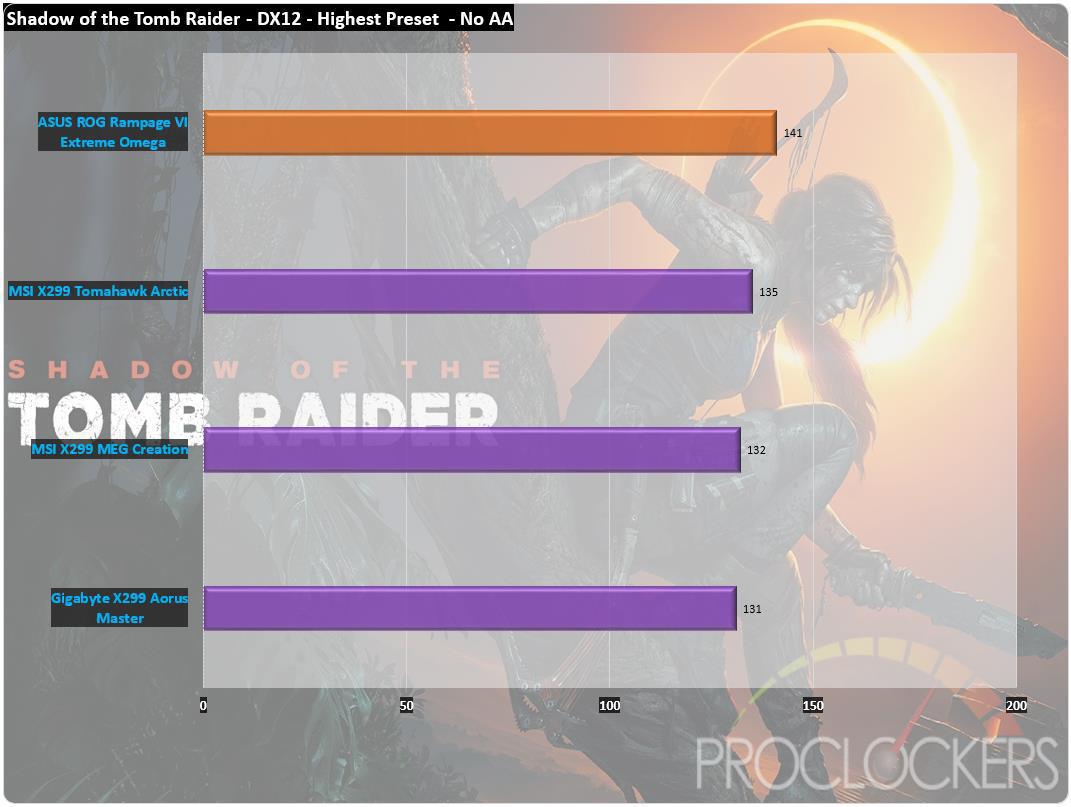 Shadow of the Tomb Raider also comes in 1st place quite easily with an average GPU score of 141 FPS.

Rise of the Tomb Raider

Rise of the Tomb Raider is an action-adventure video game developed by Crystal Dynamics and published by Square Enix. It is the sequel to the 2013 video game Tomb Raider, a reboot of the Tomb Raider franchise. It was released on Xbox One and Xbox 360 in November 2015 and for Microsoft Windows in January 2016. It is set to release for PlayStation 4 in the second half of 2016.

Rise of the Tomb Raider was officially announced in June 2014. The game’s storyline follows Lara Croft as she ventures into Siberia in search of the legendary city of Kitezh, whilst battling a paramilitary organization that intends on beating her to the city’s promise of immortality. Presented from a third-person perspective, the game primarily focuses on survival and combat, while the player may also explore its landscape and various optional tombs. Camilla Luddington returns to voice and performs her role as Lara.

Upon release, Rise of the Tomb Raider received positive reviews, with critics praising its graphics, gameplay, and characterization. It was the best-selling Xbox One game during Christmas week and had sold over one million copies by the end of 2015. Additional content was also released, including a new story campaign, a new gameplay mode, as well as new outfits and weapons for Lara. 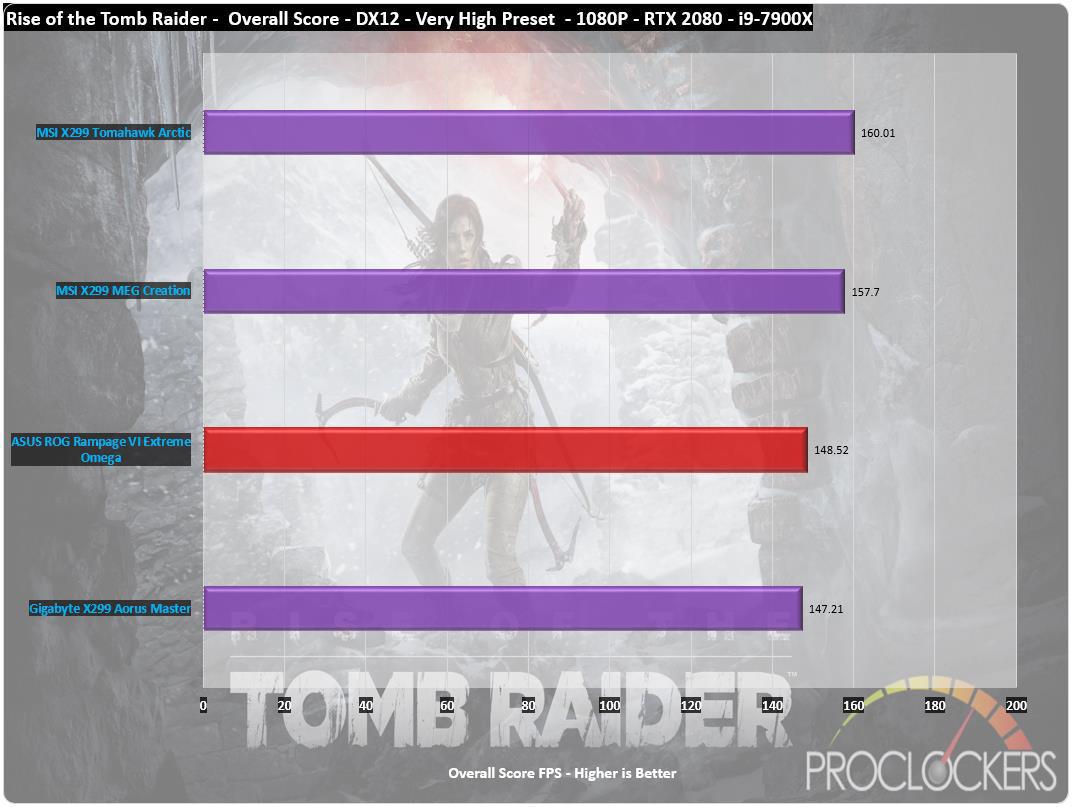