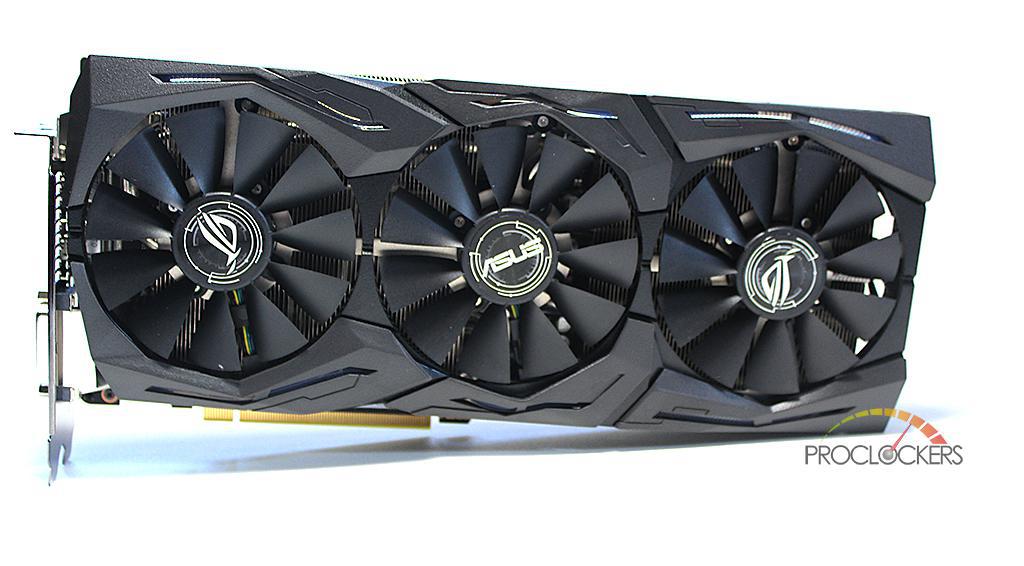 Each of the 3 fans on the front of the STRIX 1070 have RGB lighting on the top and bottom of each fan.

When compared to the STRIX 970, there are several things that set the STRIX 1070 apart. I’d say the 1070 is an upgrade in almost every way. The first thing you see is the STRIX 1070 is a 3 fans cooler. On the top and bottom of each fan, you find LED zones for the AURA RGB lighting on the front and back of the graphics card. The second RGB zone would be the large, ROG logo on the back plate of the card. The 3rd and final RGB zone are the words Republic of Gamers on the side of the card.

It’s worth noting that all ASUS graphic cards are manufactured using their Auto-Extreme Technology. This process is exclusive to ASUS and 100% automated and incorporates the highest quality materials. This also ensures that consistency while making the graphics cards. It also eliminates the human error side of things. Lastly, this new manufacturing process is more environmental friendly by reducing power consumption of the plant by almost 50% as well as eliminating chemicals. 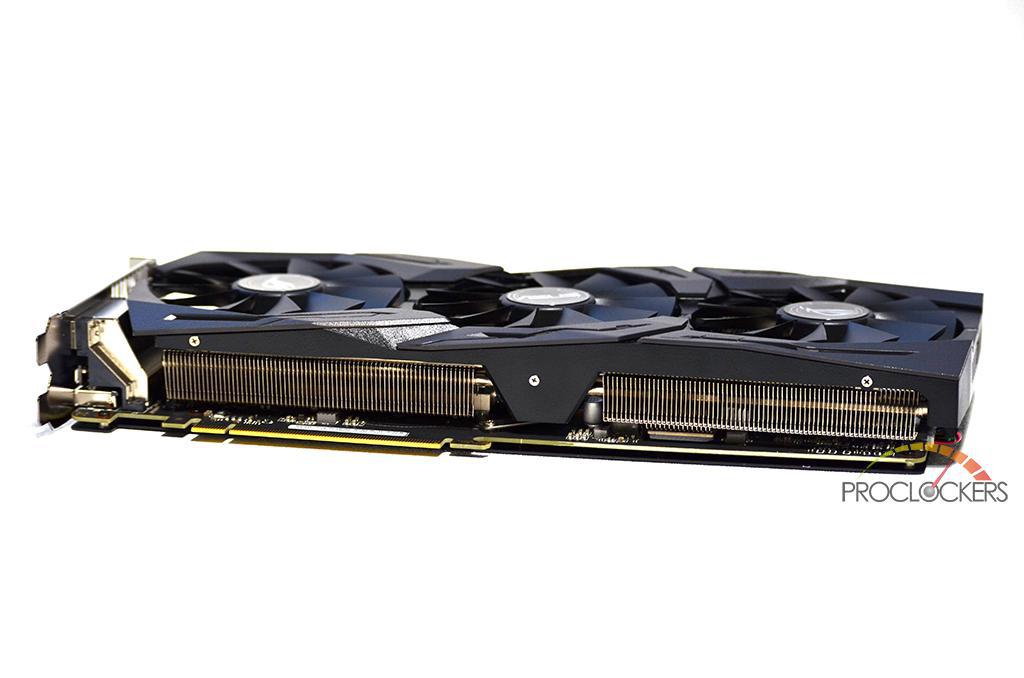 The Direct CU III cooler runs the entire length of the card. 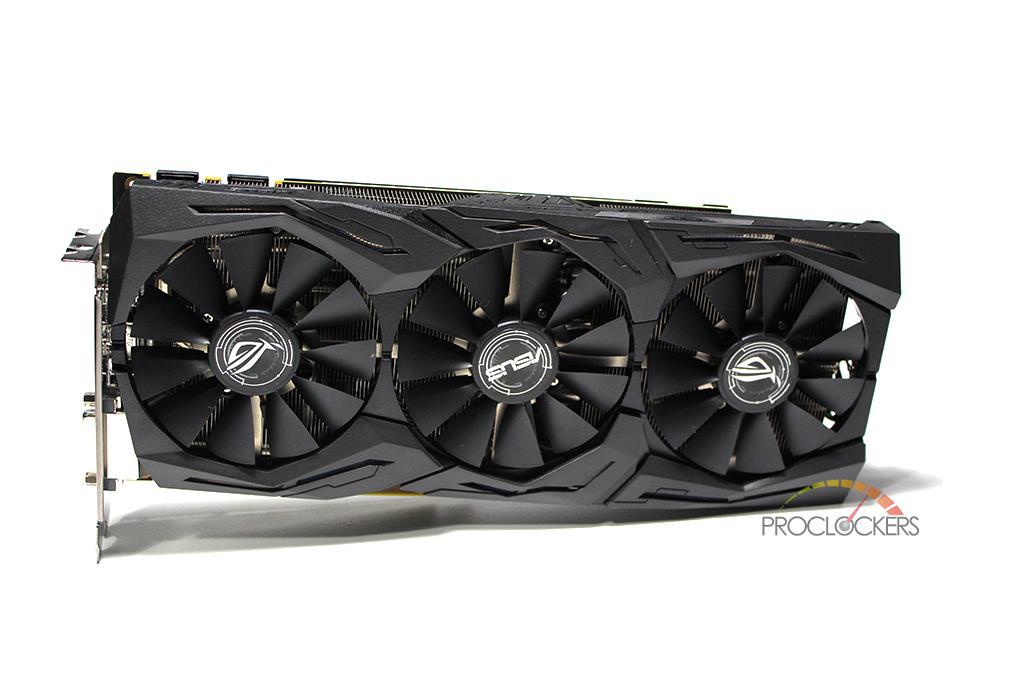 The front of the card has 3 fans with RGB lighting above and below each fan. 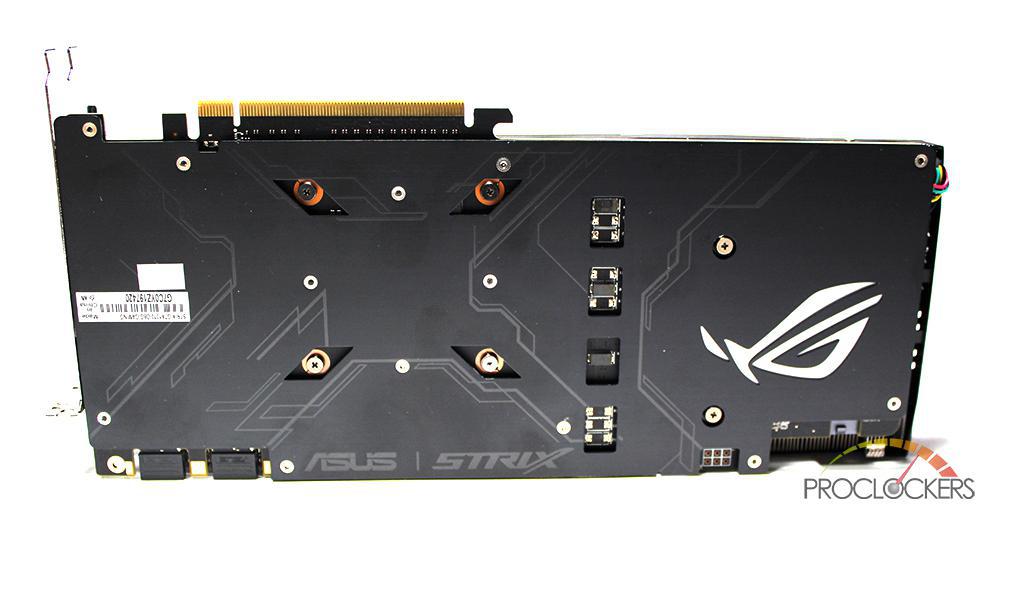 The rear of the card has the ASUS STRIX branding and the ROG logo with RGB back lighting. 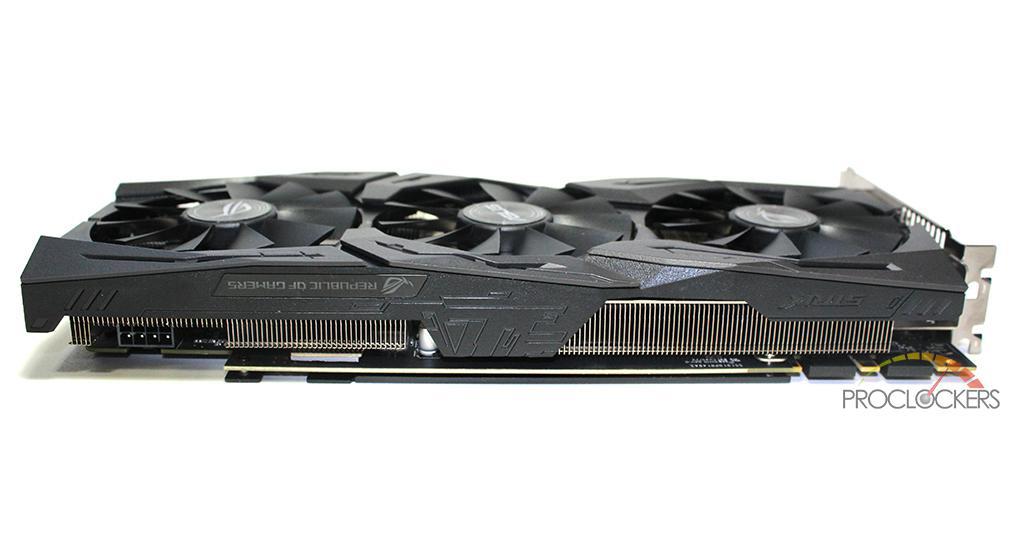 The top side of the card has the 3rd RGB zone as well as the STRIX branding. 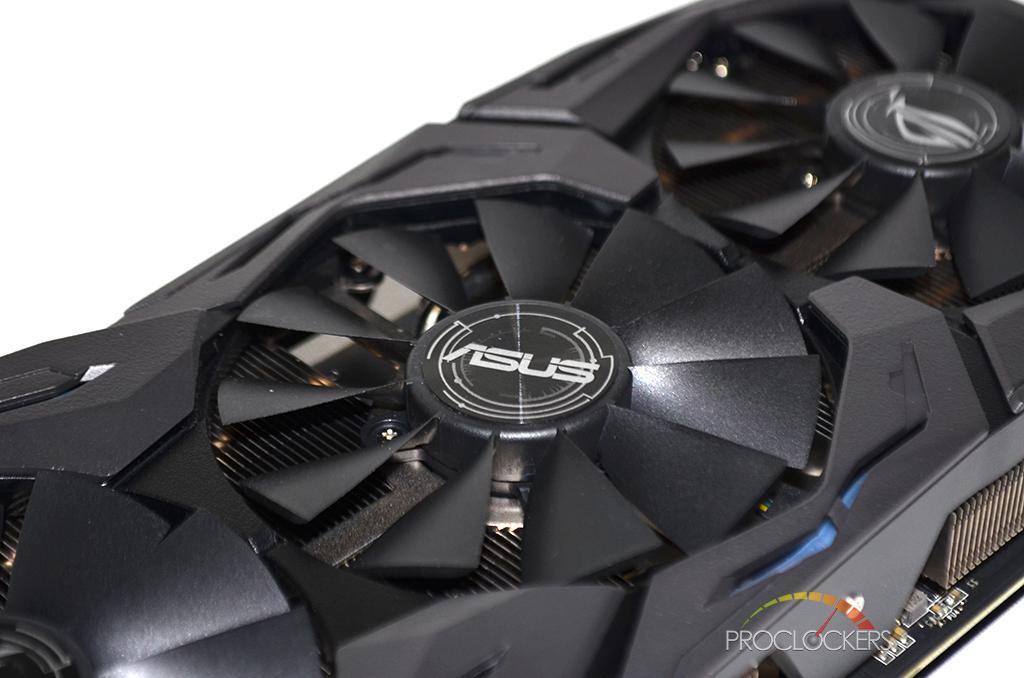 A closer look at the front of the card reveals the RGB lighting on the top and bottom of the 3 fans. 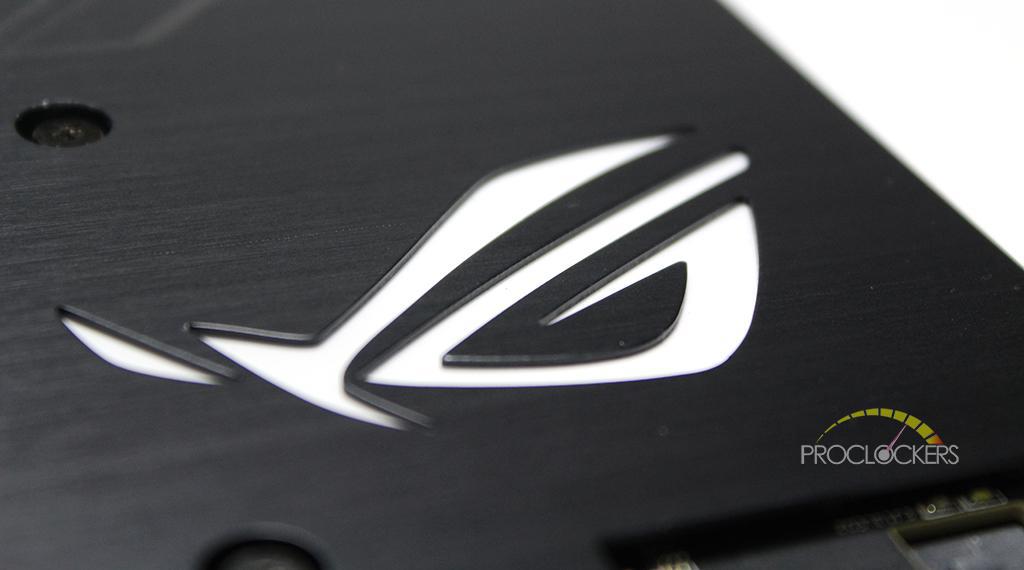 The ROG Owl Eye logo on the rear of the GPU is another RGB zone on the STRIX 1070. 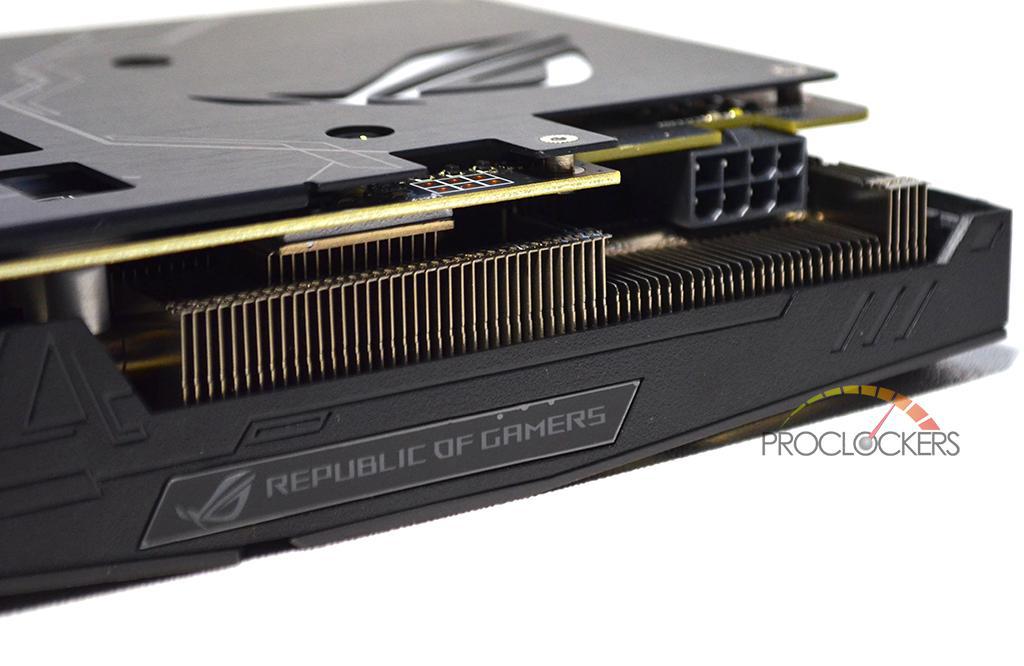 The final RGB zone is on the side of the card with the Republic of Gamers branding is. 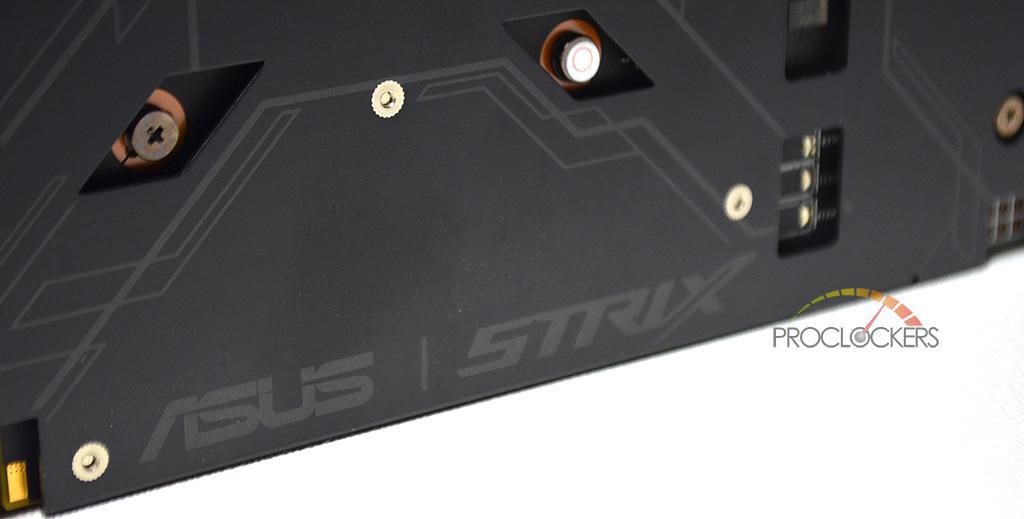 The back plate also has the Asus logo and STRIX branding on it. 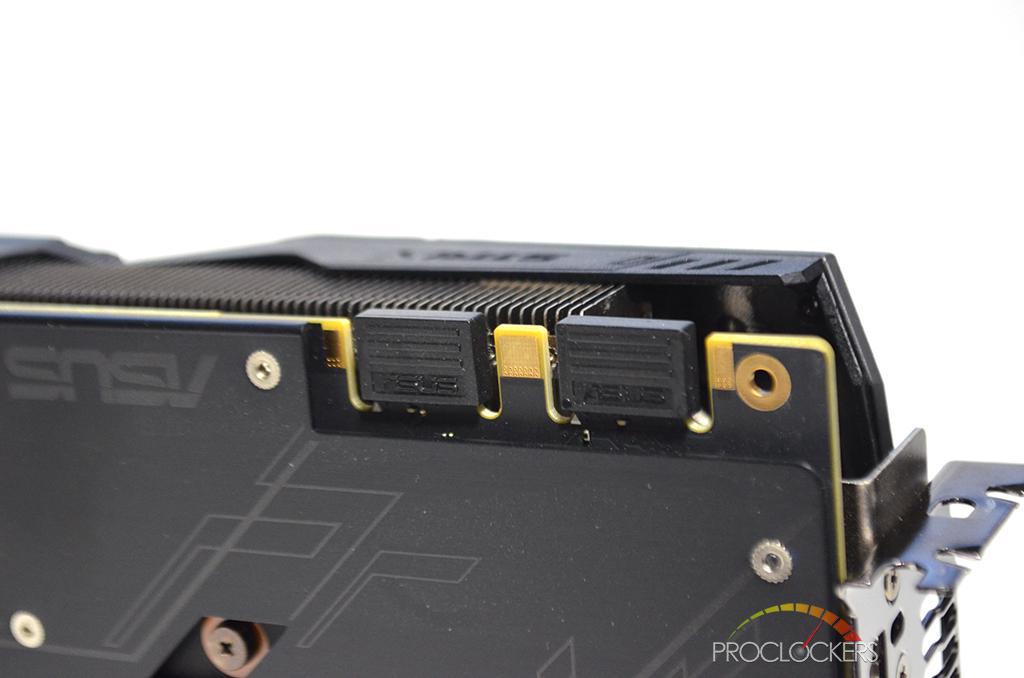 Although the card can technically support up to 4-way SLI, driver support only supports up to 2-way SLI. 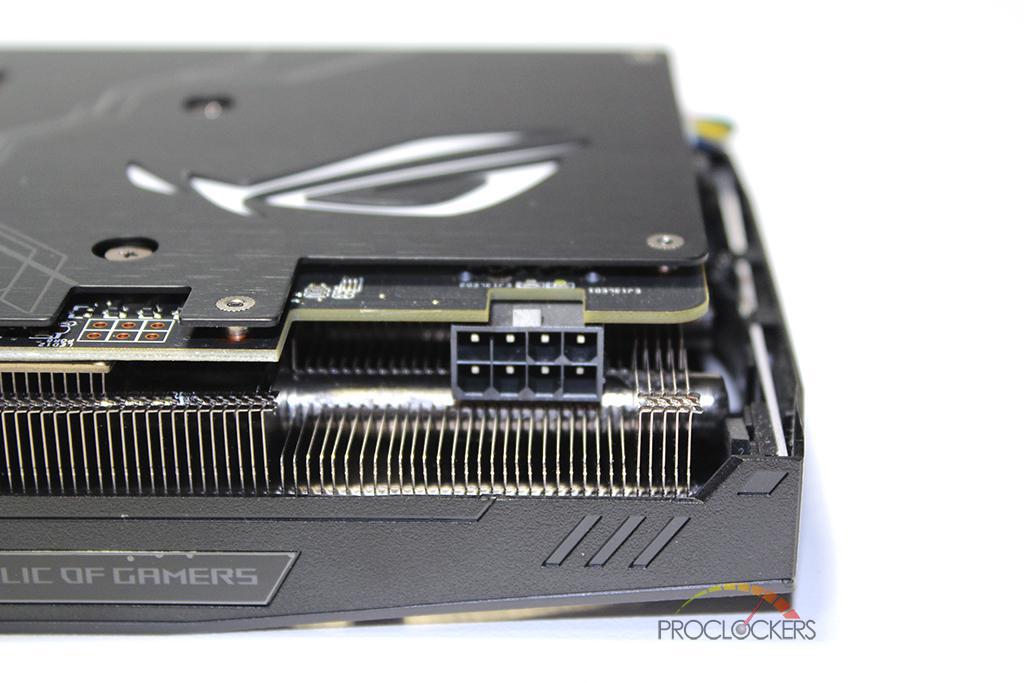 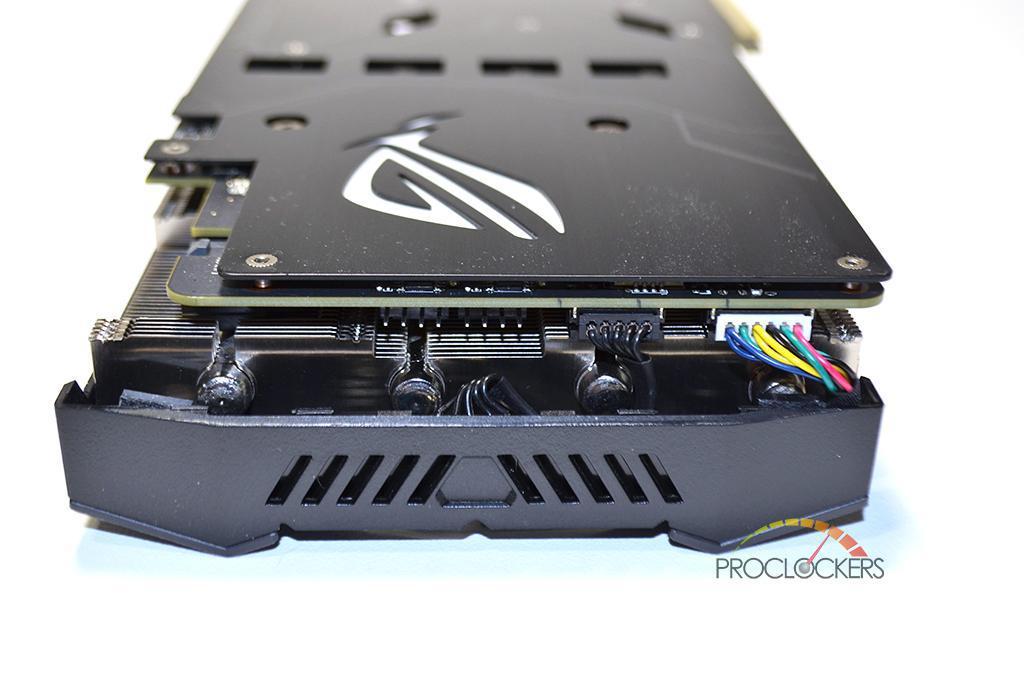 ASUS FanConnect features 2 x 4-pin GPU-controlled headers connected to system fans. This allows the user to add 2 additional fans that will be controlled by the card. 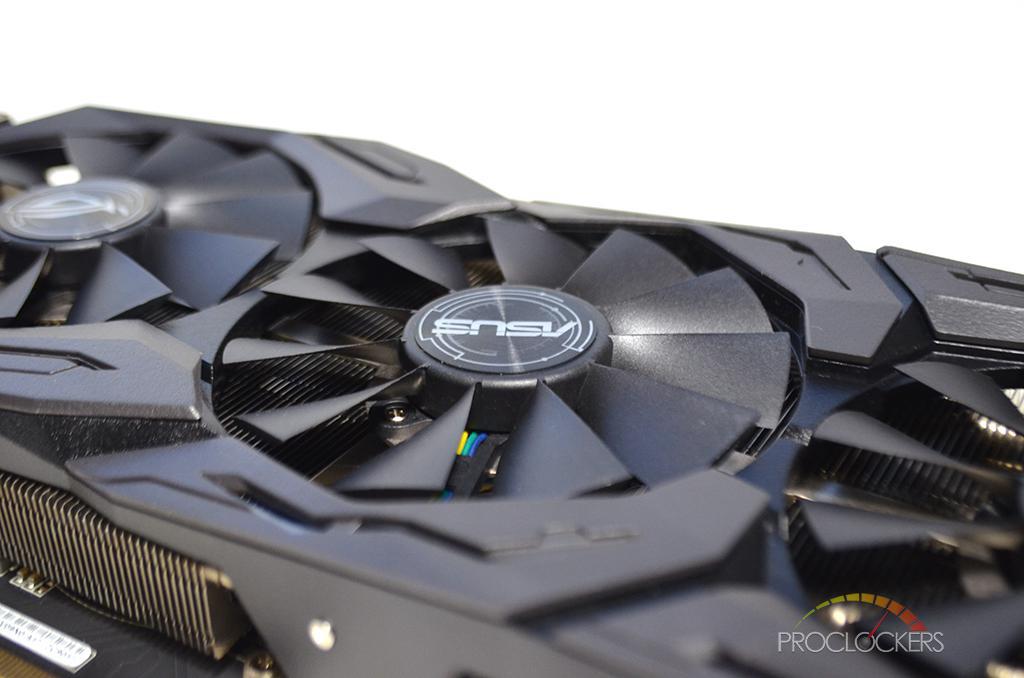 Their patented Wing-Blade Fans are designed for 30 times quieter performance and a 30% increase in cooling capability. 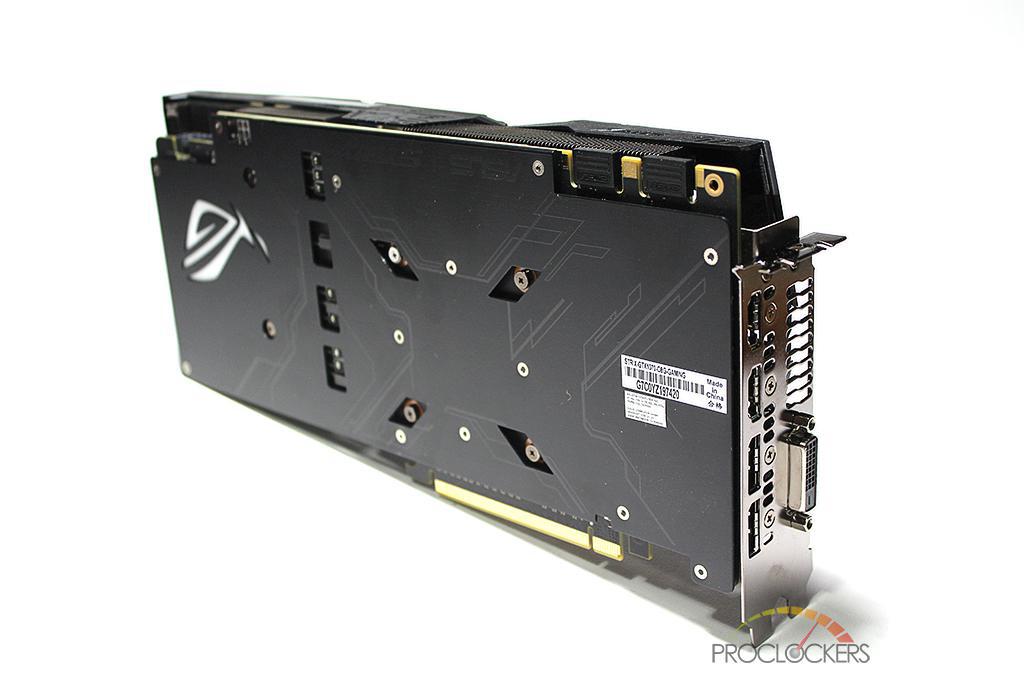 When you look at the rear of the GPU, you see the 6 screws that hold the cooler on the custom PCB of the STRIX 1070.

The IO on the STRIX 1070 isn’t your average IO. This is since it’s considered “VR Ready” with 2 x HDMI 2.0 ports. The STRIX 1070 also has a single DVI-D and 2 Display Ports. I would have rather kept the third DisplayPort over the DVD-D. However, it is good to have a DVI-D port as well. As you look down the side of the card, you’ll see the standard PCIe connection. You can also see how thick the Direct CU Cooler is. Running the entire length of the custom PCB, the heatsink is made up of 5 copper heat pipes that make direct contact with the GPU Die.

Asus FanConnect is another great feature of the STRIX 1070. In just about all systems, the case fans are controlled through the motherboard, and designed to help keep the system cool. However, the Strix 1070 has 2, 4-pin fan headers on the rear of the card, near the 8-pin power connector. This allows you to have two case fans controlled by the GPU instead of the CPU. This way, you can optimize air flow to help keep the GPU cool.

When you look along the top of the card, you see the SLI fingers. Although the card can technically support up to 4-way SLI, we all know that Nvidia is only giving driver support up to 2-way SLI. There are a few exceptions to this tough. There are a few synthetic benchmarks, such as 3DMARK, that allow 3 and 4-way SLI. Game developers do have the option to offer 3 and 4-way SLI support, but few, if any do. 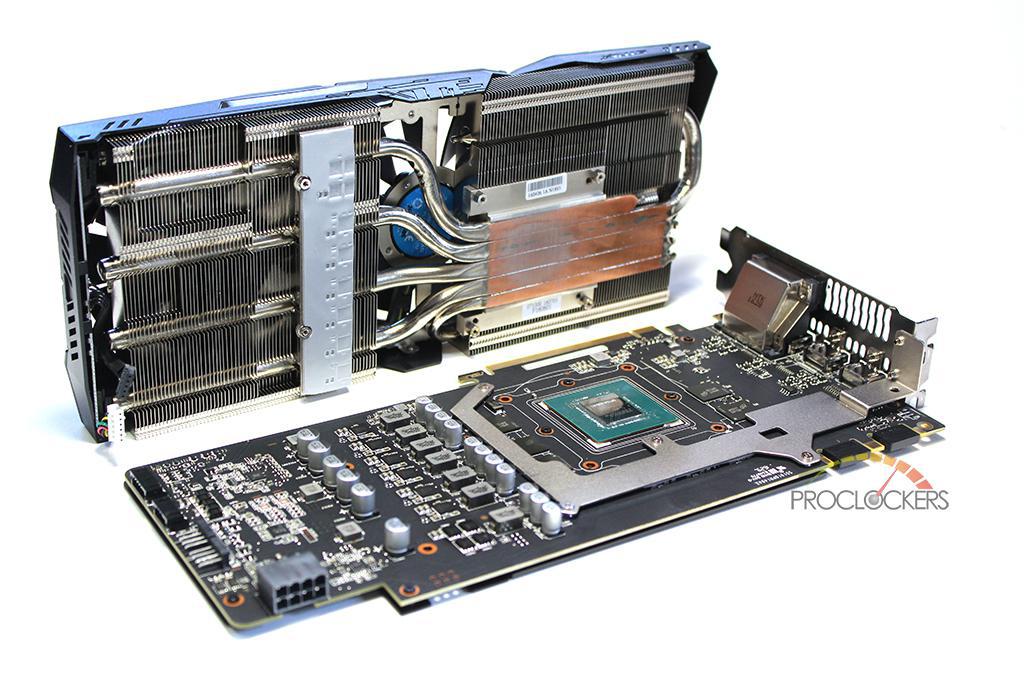 The first thing I noticed when the card was pulled apart was the thermal pads for the 6+1 phase power delivery. 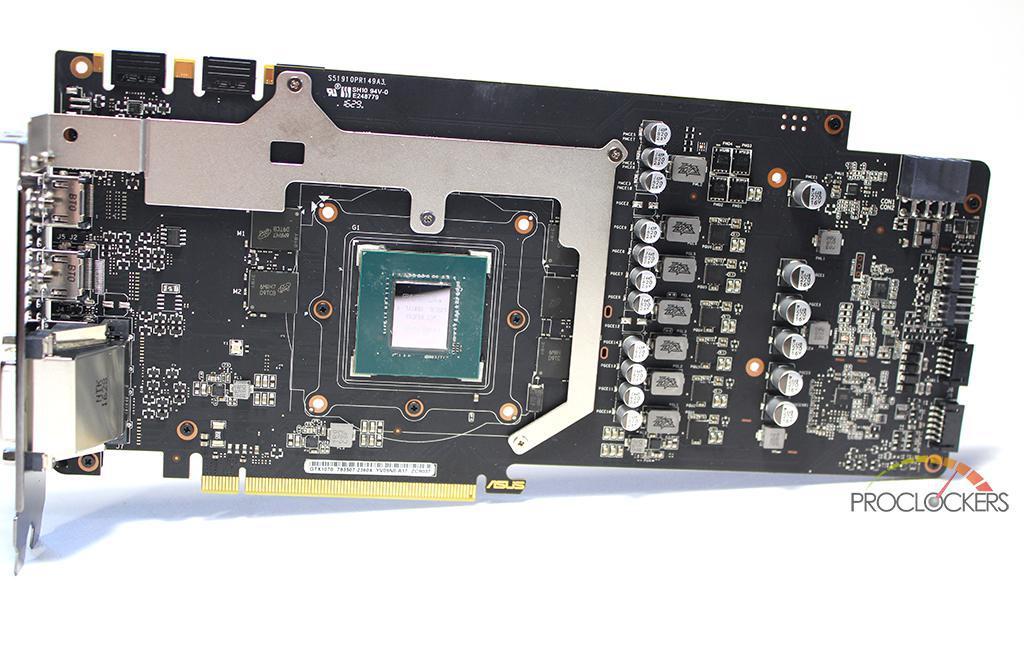 Here you see the custom PCB of the STRIX 1070. To remove the back plate, you must unscrew it from this side of the PCB.

The STRIX 107 is equipped with a 6+1 phase power delivery. Asus has used premium alloy components in their graphics cards. Their Super Alloy II Components increase the efficiency, reduce power loss and achieve thermal levels that are almost 50% cooler than previous generations of STRIX cards. Some of the benefits of the Super Alloy II Components are quieter choke and 2.5 times the lifespan of the capacitors. The capacitors are rated at about 90,000 hours longer than normal capacitors. The DrMOS run about 20% cooler. The power delivery is overall designed to decrease temperatures and increase both overclocking performance and efficiency. 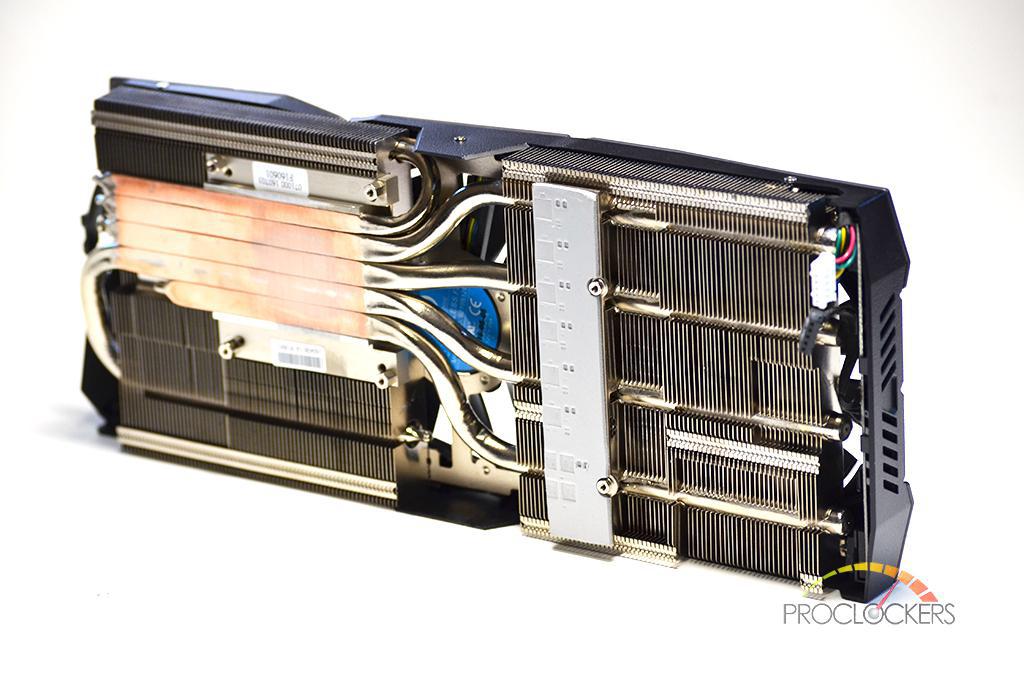 This is the massive heatsink on the ROG STRIX 1070. 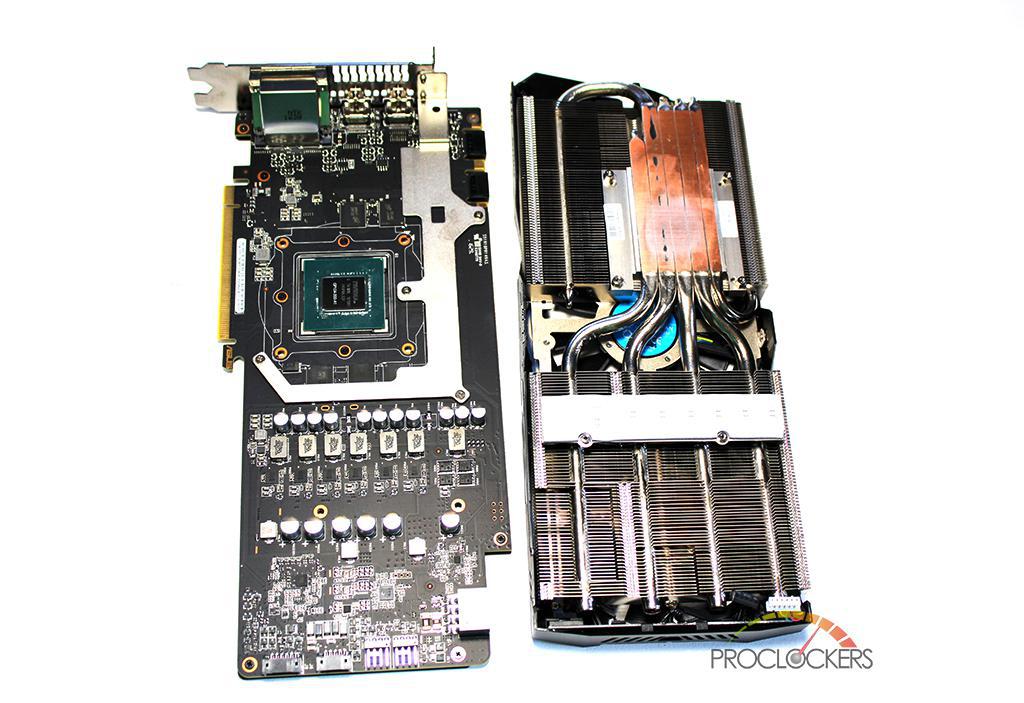 The cooler and PCB side by side. Once they are apart, you can truly appreciate the weight of the Direct CU III cooler. 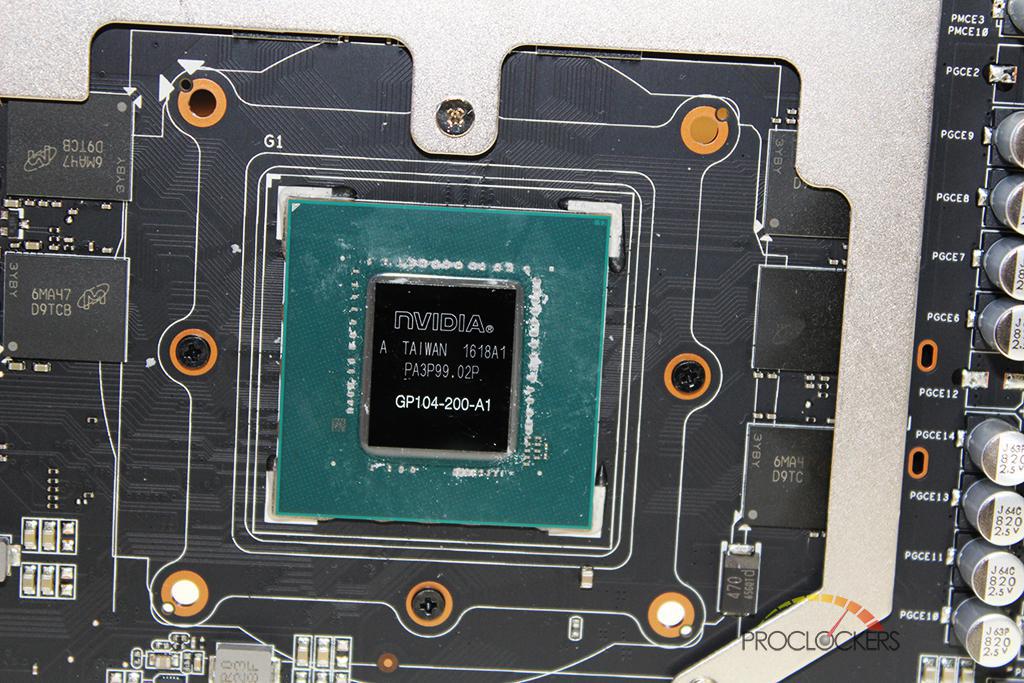 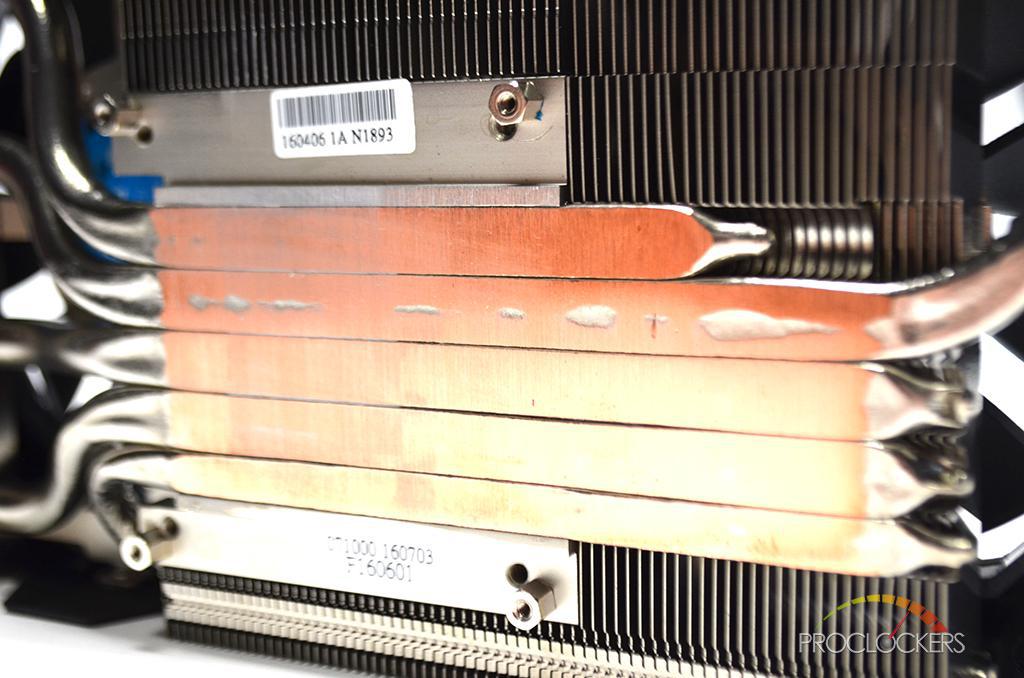 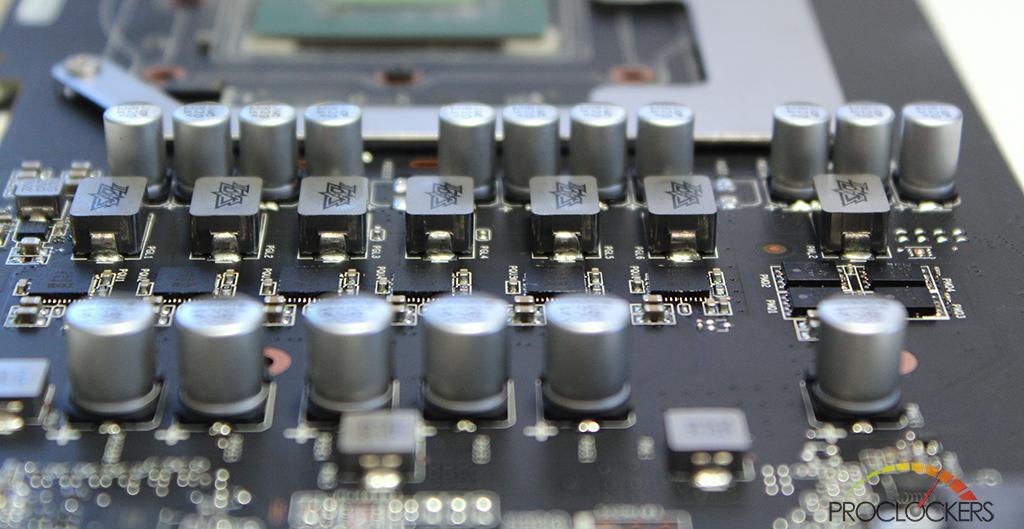 The 6+1 phase power delivery is made up of Asus’s Auto-Extreme Technology with Super Alloy Power II. 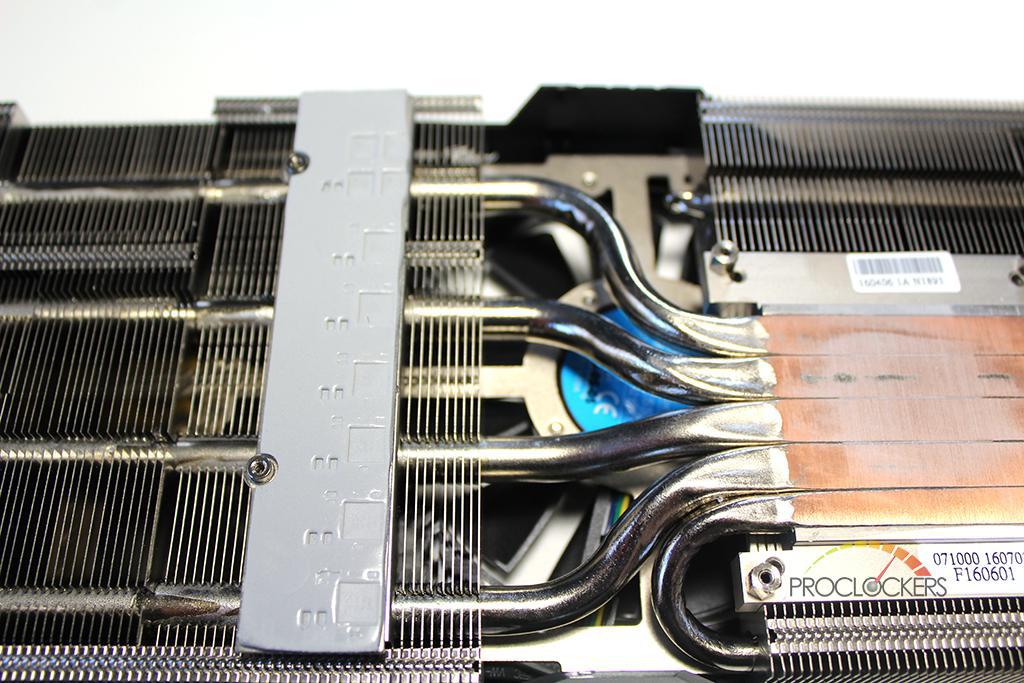 The power delivery has this large thermal pad between itself and the heatsink. You can also see there is a fan directly above the heat pipes. 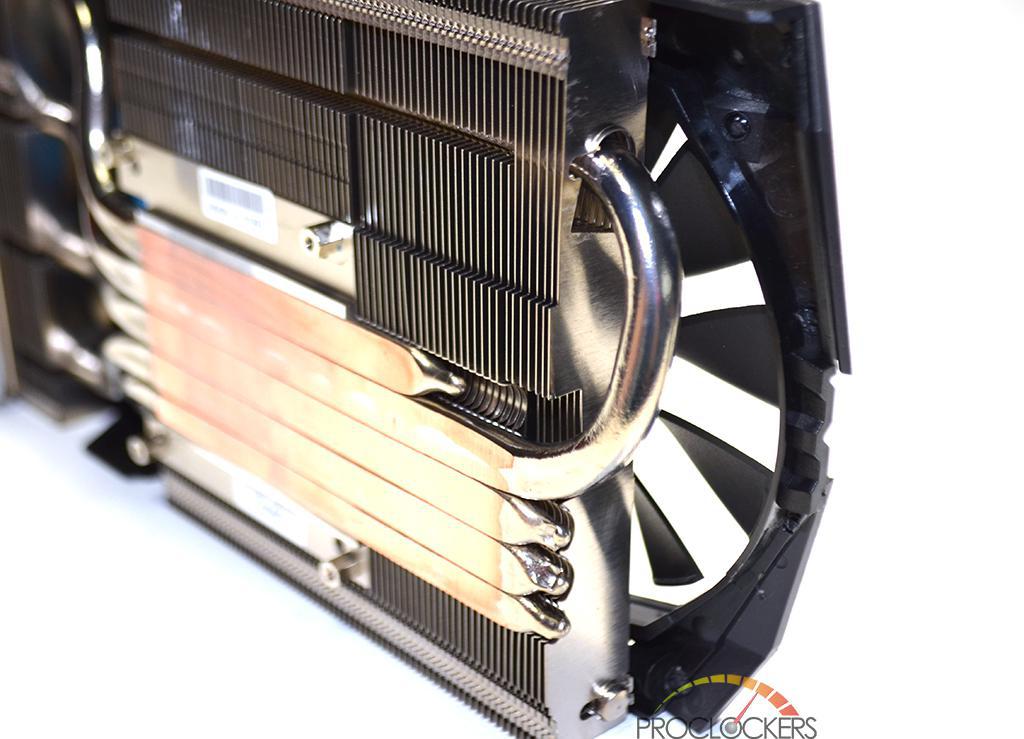 The back end shows us that the heat pipes loop through the entire heatsink. 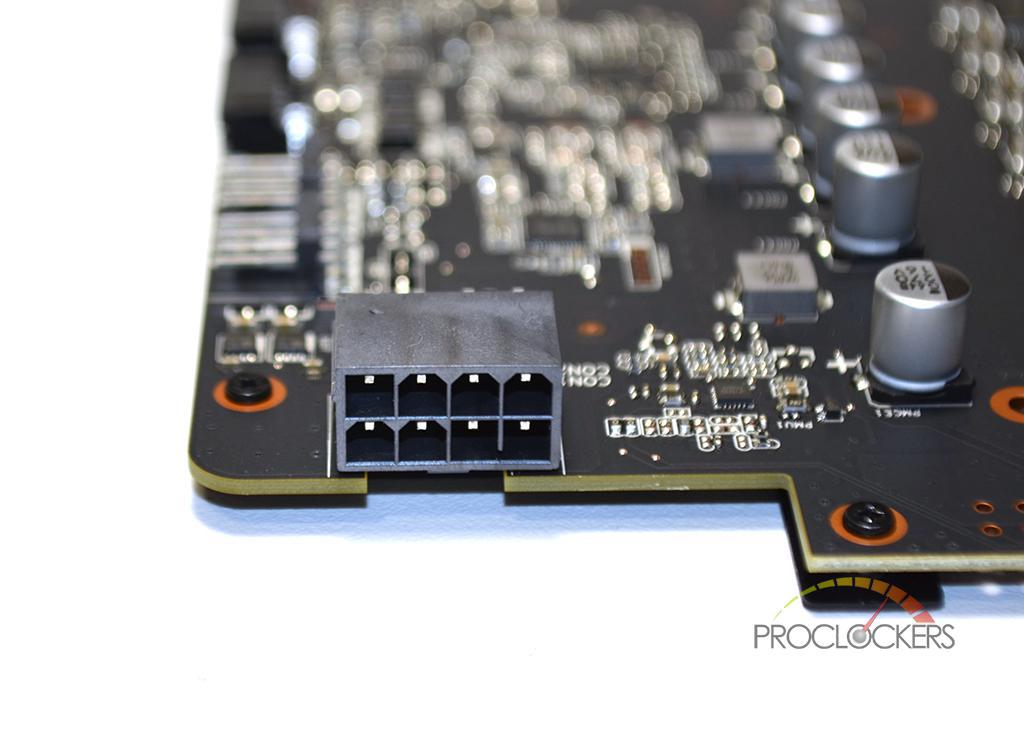 As mentioned before, The Asus STRIX 1070 has a single 8-pin power connector. 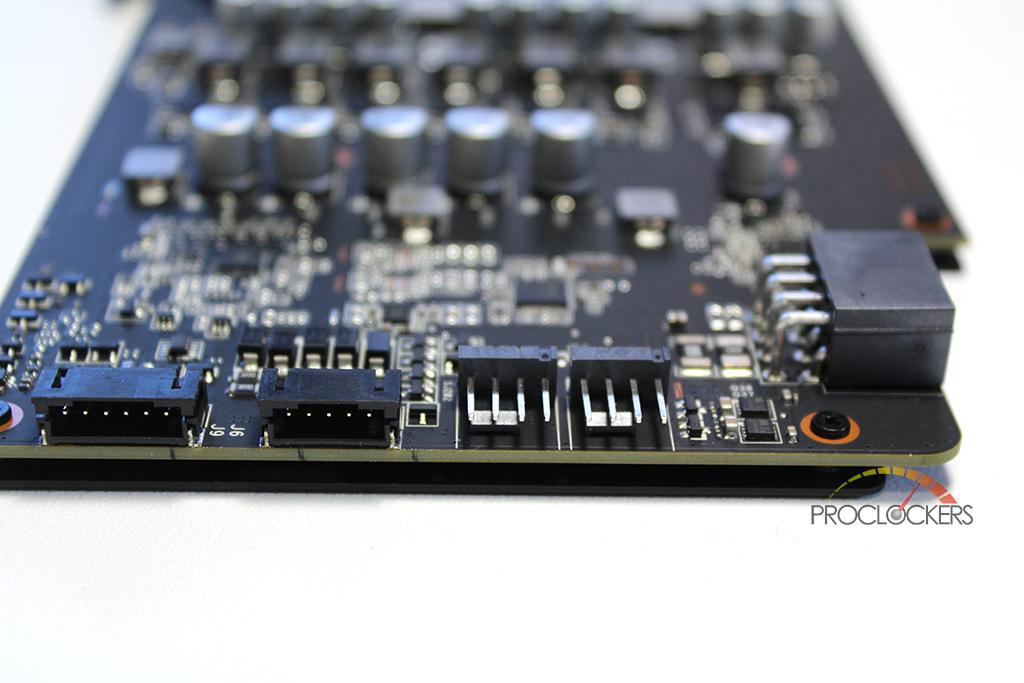 The ROG STRIX 1070 has 2 x 4-pin fan headers on the card itself. This allows the GPU to control 2 case fans on top of the 3 fans on the cooler.