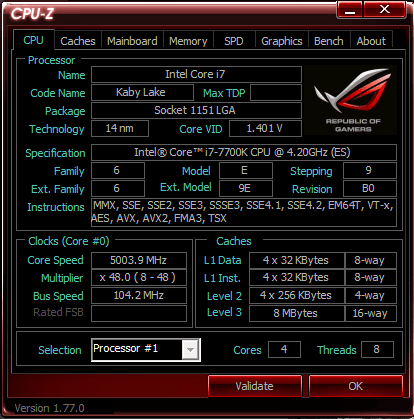 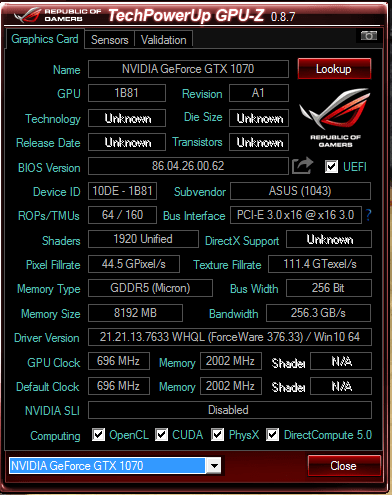 As in all benchmarks, I do my absolute best to keep all testing fair and as equal as possible. The ambient temperature was a mild 22°c, or 72°f. The i7 7700k was run at 5.0 GHZ @ 1.40 volts. I bit higher than I like, but stable none the less. The Asus STRIX 1070 was kept at its stock sped, in OC mode, of 1860 MHz for all benchmarks. The only exception being 3DMARK Time Spy and Firestrike. Both of which were run at stock speeds and overclocked to as far as GPU Tweak II would go. That being a +91 on the core, +10 on the voltage, plus 250 on the memory and the power draw as high as it was allowed. For the synthetic benchmarks, I tested Open GL and DirectX 11. DX12 still hasn’t been widely adopted enough for there to be enough games to test it. For the Gaming benchmarks, the games were run in 1920 x 1080p. 2560 x 1440p and 3840 x 2160p. We use only full release drivers and software, meaning no beta drivers as they are usually not 100% stable. I used Windows 10 Professional due to it being the most recent operating system, as well as having DX 12 support. All games were run on the highest possible settings, with no MSAA or AA of any kind in 4k results. The GPU was set to its stock clocks.

What exactly is ASIC Quality and how does it effect a GPU? Application-specific integrated circuit, or ASIC, is a chip customized for a specific use. For example, a GPU is a graphics processing unit. That’s why we equate ASIC quality with GPUs and not CPUs. CPUs are designed to do a wide range of tasks and GPUs handle graphics. As the chips are produced, they are tested to ensure quality, and assigned a rating. The high-quality ASIC is one that achieves the highest clock speed, while consuming the lowest amount of power and producing the least amount of heat. An ideal chip you might say. So, what does this have to do with a GPU? When applying ASIC quality to a GPU, you take into consideration power consumption and heat production. With less power consumption and lower heat, in theory comes a higher ASIC Quality. This is where the binning process comes into play and why the higher end GPUs like for example the EVGA Kingpin and the MSI lightning should end up with the higher binned, and therefore higher ASIC quality chips. So, what’s a good ASIC score. GPU-Z essentially says if you have a higher ASIC Quality, your card will overclock just fine on AIR, usually 70% +. However, if you have a lower ASIC quality, 60% +, the card is better suited for other means of cooling, such as water or LN2. This is just how Techpowerup interprets ASIC Quality. With the Asus ROG STRIX 1070 Gaming cards the I used in this review has an ASIC Quality of 60.2%. On a side note, it seems that GPU-Z wouldn’t give an ASIC reading on any card after version 0.8.7. Now, after all that, there must be a disclaimer. At least for Pascal, several people have said they have gotten inconsistent ASIC readings from the same card, on different systems. Some cards, not even giving an ASIC quality at all. So, take this reading with a grain of salt. 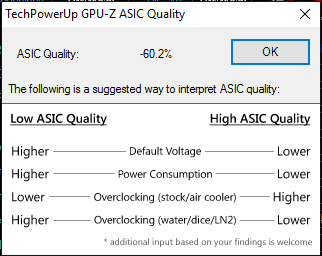 Cinebench is a synthetic benchmark evaluates your computer’s performance capabilities. It’s based on MAXON’s animation software Cinema 4D, which is used by studios and production houses worldwide for 3D content creation. I ran all aspects of Cinebench. First was their OpenGL GPU test in which the MSI GTX 1070 GAMING 8G scored 143.57 fps. Second was the CPU test. This test maxes the CPU to 100% and tests its rendering capability. My i7 7700k scored an impressive 1070 CB on this run, with a single core performance of 214 cb. This is by far the best overall and single thread score I’ve ever achieved with a quad core with hyperthreading. As for the OpenGL benchmark, the Asus ROG STRIX 1070 achieved 125.29 frames per second. This test throws me off a bit, as usual. Seeing how the last card I tested, the Red Devil RX 470 scored 180.30 FPS. I’m just not sure how these results are achieved. It does seem that the OpenGL test favors AMD graphics cards though.

The Heaven Benchmark is a DirectX 11 benchmark designed to stress your GPU under heavy loads. The Heaven Benchmark can be used to determine the stability of a GPU under extremely stressful conditions. I ran the heaven benchmark with the ASUS STRIX GTX 1070 on a custom Preset, Ultra Quality, Extreme Tessellation, AA X8, in 1080p using the DX 11 API. With these settings, the STRIX 1070 received and overall score of 2413 with an average FPS of 95.8, a minimum or 27.6 and a maximum if 213.4. 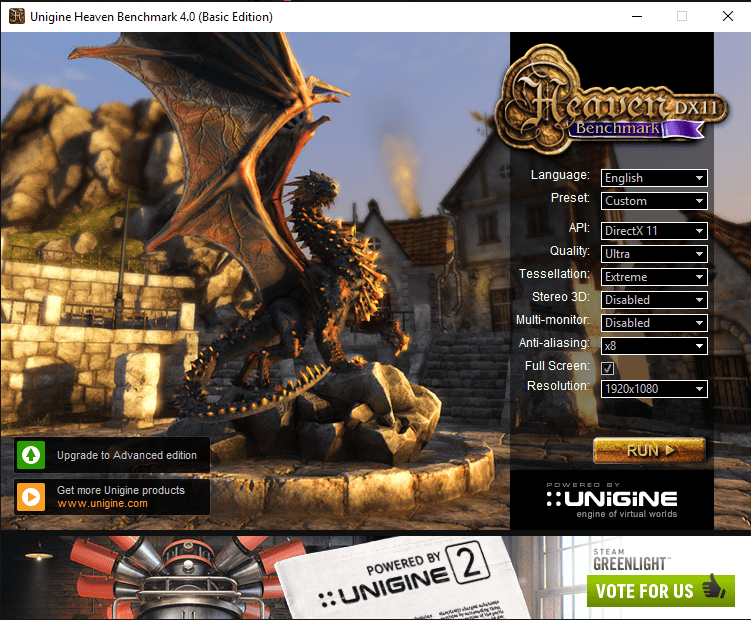 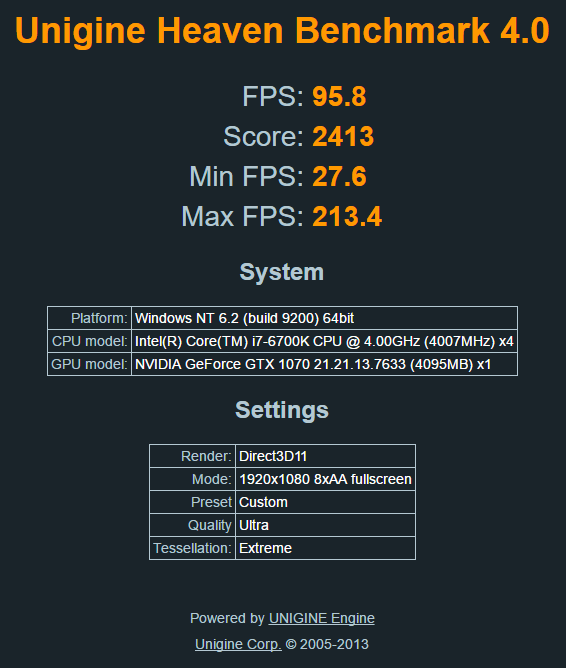 As for games, I tested the same seven games I usually test. A mix of older and newer titles, with no games older than 2013. Crysis 3 being the oldest of the titles. However, it’s still one of the most graphically demanding games on the market. Grand Theft Auto V may have launched on the 7th generation of consoles in 2013. However, it didn’t hit PC until 2015 and has one of the most extensive graphics menus I’ve ever seen. Shadow of Mordor is a 2014 title and is still one of the only games to max out the VRAM on a 980 ti when the 4k texture pack is installed. Thief is another 2014 title, but it’s still a beautiful and rather demanding game. I’ve replace the Tomb Raider reboot with its sequel, Rise of the Tomb Raider. I used the Witcher 3 for the fact of how beautiful, popular and very demanding the game is, even on high end systems. Lastly, I recently added Watch Dogs 2 to the suite. This is because it’s a new title and Ubisoft can make a pretty game. They were tested in 1080p, 1440p, and 4k. All games were played at their max settings. Each benchmark run was timed at 120 seconds, ran 3 times each, and averaged out to get the overall results. 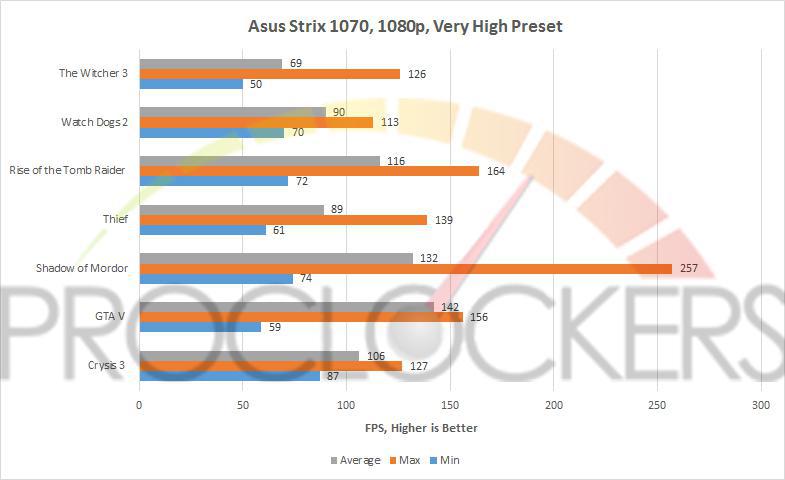 As the chart shows, the STRIX 1070 can easily handle 1080p gaming. You could even say it could be overkill in some games. 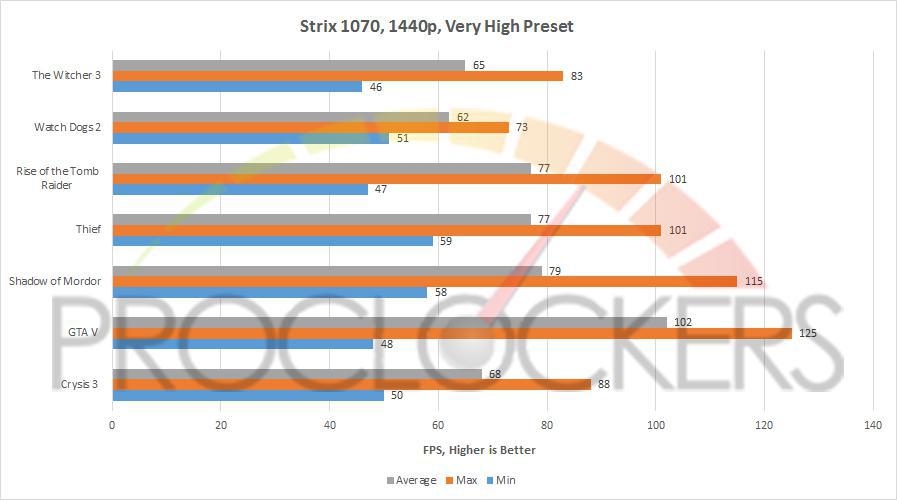 The STRIX 1070 was clearly made with 1440p gaming in mind. Not a single game I tested went below 60 FPS, even at max settings. 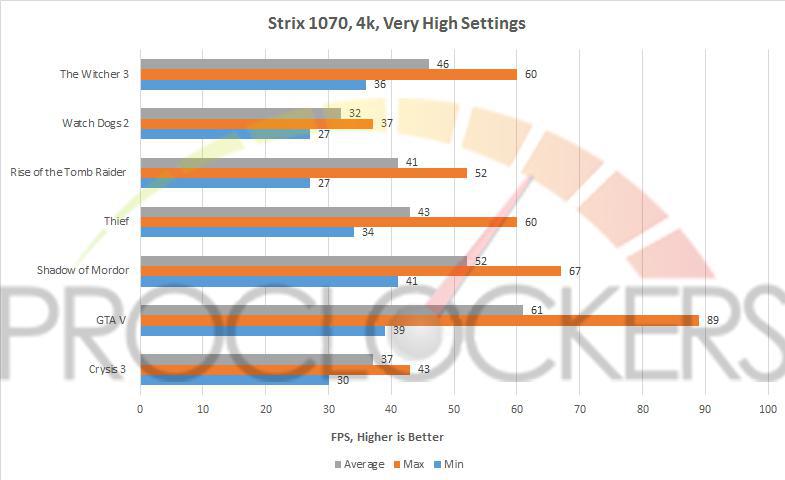 Even at 4k, the STRIX 1070 holds its ground. If you can handle 30 FPS, then this card is all you need for up to 4k gaming. If we lower the setting, we can hit 60 fps in many games, especially older titles.