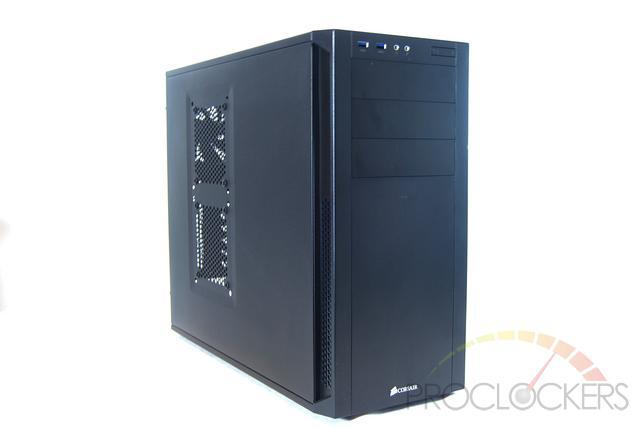 But if you are not likely to even pass out your hard earned loot for the 300R, 400R or 500R, then what about $60 for a 200R. Yup, just last Wednesday (24th of October) Corsair introduced its lowest price case to date. The 200R offers simple for classy styling and plenty of functionality that is sure to woo those wanting to build on a budget, but want to do it with quality.

When Corsair came to market with the Obsidian Series 800D after reading all the reviews I thought it was one of the greatest cases on the planet Earth. But the thing about it I could never afford one. And at that point I thought Corsair would put out a case at the price point I would be able to jump on. But hold up…wait. There was the introduction of the Graphite series, another great delight from Corsair. These cases where definitely priced where I can walk into my favorite PC store and pick up one. My main PC was housed in the 600T for quite some time.

But what about those that are not willing to fork out $160 or so on a case? What does Corsair for them? We have the answer and it comes in the form of the Vengeance and Carbide Series. Priced a little cheaper at $99 to $139, the both lines offer great styling and functionality. I actually replaced my 600T to outfit my rig in the white 500R, which was a Carbide series model.

But if you are not likely to even pass out your hard earned loot for the 300R, 400R or 500R, then what about $60 for a 200R. Yup, just last Wednesday (24th of October) Corsair introduced its lowest price case to date. The 200R offers simple for classy styling and plenty of functionality that is sure to woo those wanting to build on a budget, but want to do it with quality.

Less work. More play. Build with the Carbide Series 200R and the only time you’ll need to pick up a screwdriver is to install the motherboard. The side panels and expansion slots use thumbscrews, and SSD, hard drive and optical drive installation are all tool-free. Cutouts for cable routing and CPU cooling make builds and upgrades neat and simple.

Carbide Series 200R is compact, but it’s designed to let you build high-performance systems with massive storage, extra graphics performance, and superior cooling and ventilation. You get seven PCI-E slots, and you can install up to four hard drives and four SSDs at once. Eight fan mounting points let you expand your cooling system to match your high-performance components.

Closer look at the exterior

If you are looking for a case be inconspicuous allowing not too much attention to be drawn to it than the Carbide 200R just maybe what the doctor ordered. Not saying the 200R is not visually appealing…quite the opposite. It’s a good looking case but very subtle…no flash whatsoever. As of now the case comes in only black which is the color inside and out. The case obviously fits into the mid-tower category and that can be backed by its overall size. The case stands 19.29” tall and sits just 22.05” deep with a width of just 10.63”. 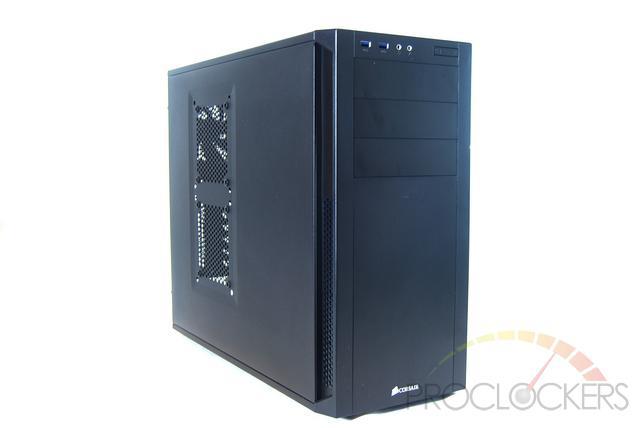 One of the first things one will notice about the 200R is that it doesn’t use the typical mesh front like many of the other cases on the market including other within the Carbide series. The entire front looks like one solid piece but it is not at the upper half consist of three optical drive bays the bay covers must be removed from the inside. Air is not cycled into the case directly from the front but from areas aligning the sides of the case. 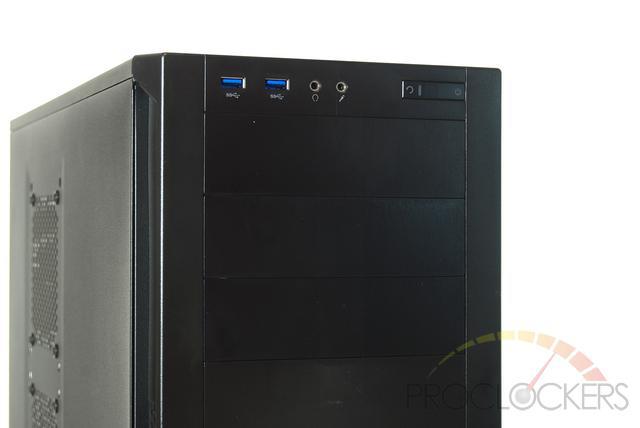 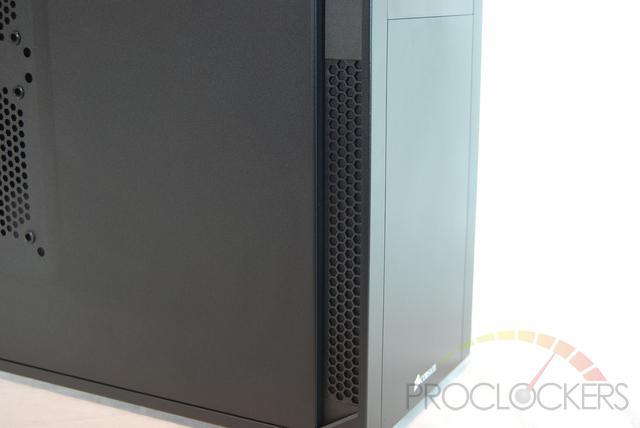 Above the topmost drive bay is the I/O area consist of dual USB 3.0 ports and the typical dual audio plugs. And a large rectangle-shaped power switch and smaller reset button. 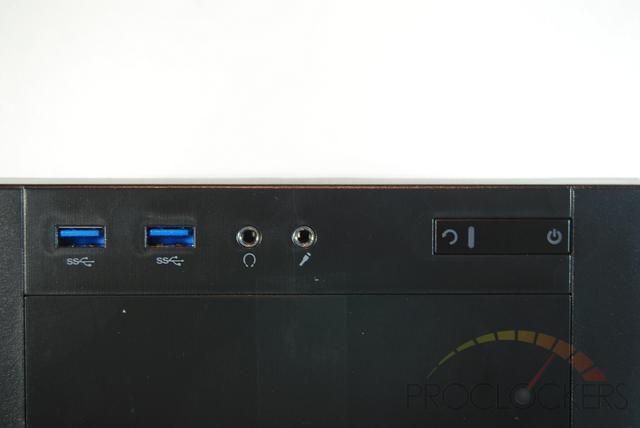 As of now there are no windows on the 200R. Companies like Corsair like to offer an upgrade model to add the window or offer an optional side panel through their online store. No word if that is the case with the 200R. If you want add ventilation you can mount additional 120/140mm directly to the side panel. 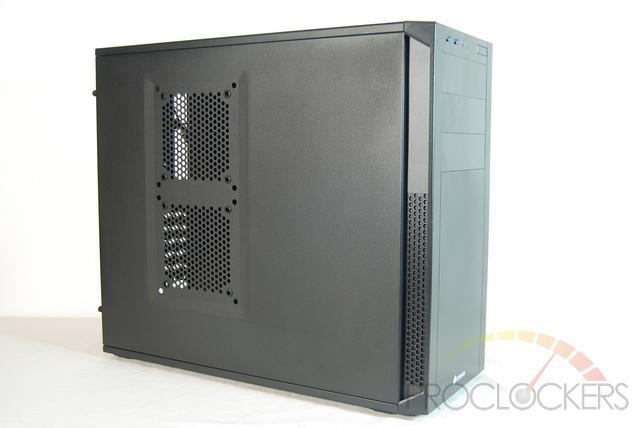 There isn’t much to talk about when it comes to the right side panel. 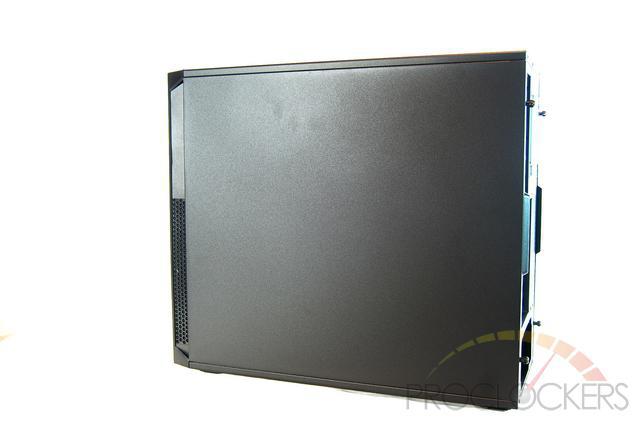 The top of the case is well vented and has placement locations for dual fans measuring 120mm or 140mm. One could opt to throw in one of the many all-in-one water-cooling kits Corsair offers. Corsair makes sure that vibration is eliminated from the equation as rubber grommets are provided. 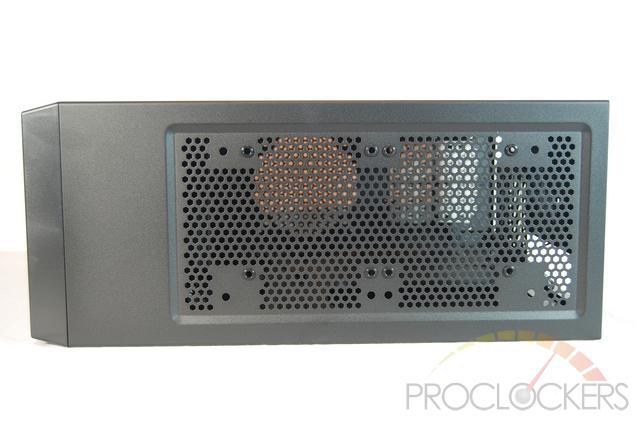 The 200R places the PSU on the bottom of the case like so many nowadays. A removable and washable filter is used to help keep the PSU free of dust. And there is also room for yet another 120/140mm intake fan. 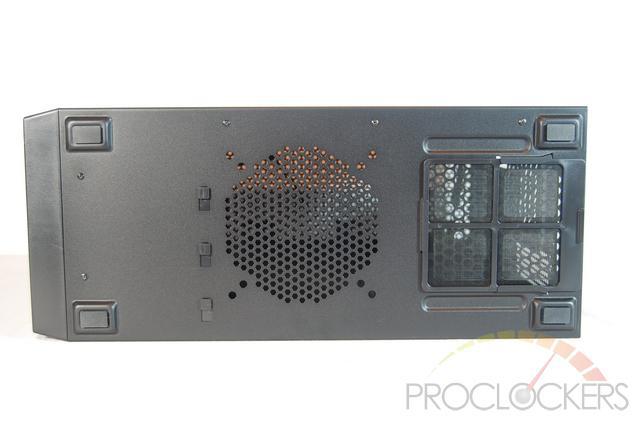 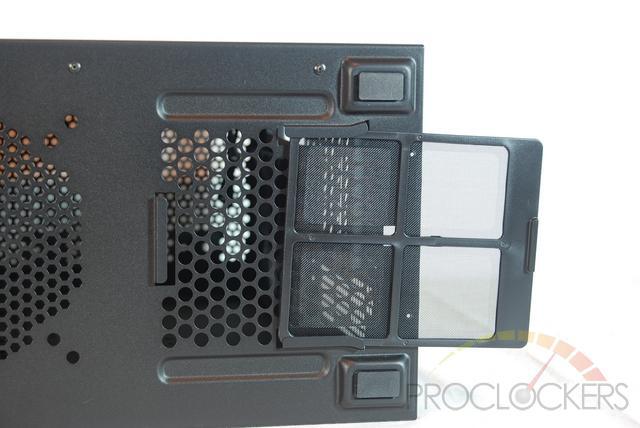 The rear of the 200R carries the typical layout for a mid-tower. But we love how Corsair used vented slot covers for the expansion slots. 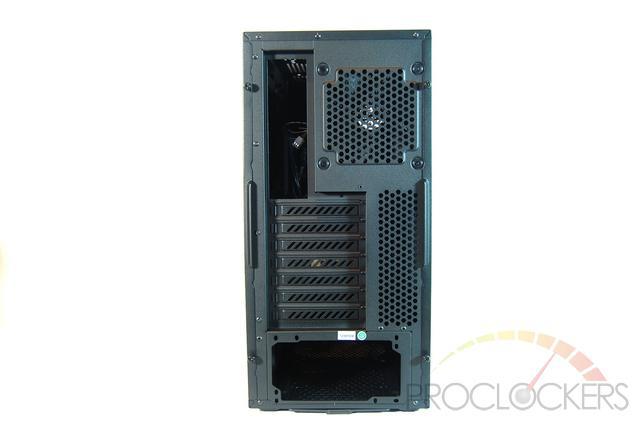 Closer look at the interior

Removing the thumbscrews to relieve the case of its side panel you can get a good glance of the interior of the 200R. Corsair did a good job of keeping the case clean and well organized. The interior is all-black. 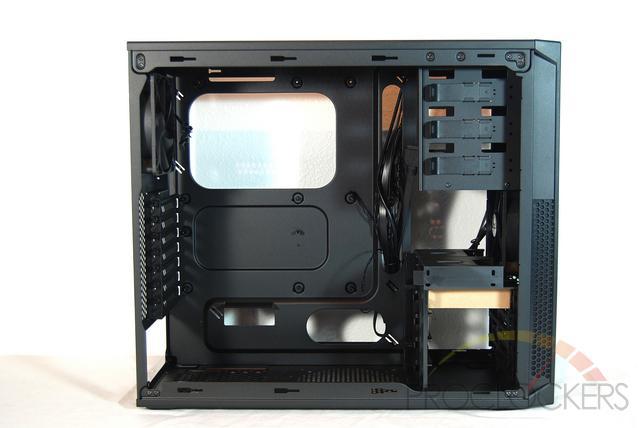 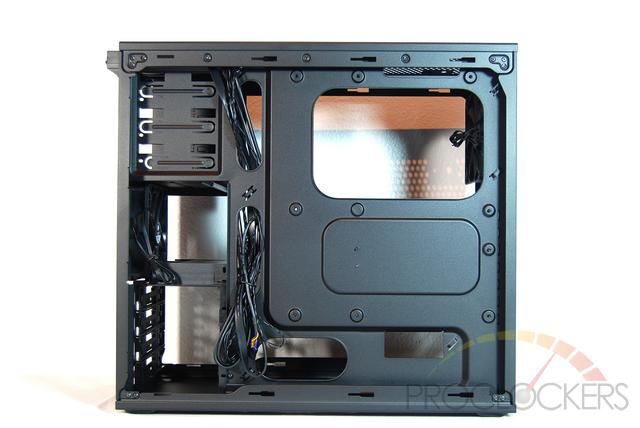 In the motherboard tray is a very large cutout for the CPU cooler and three large oval openings for routing cases to the rear of the tray. 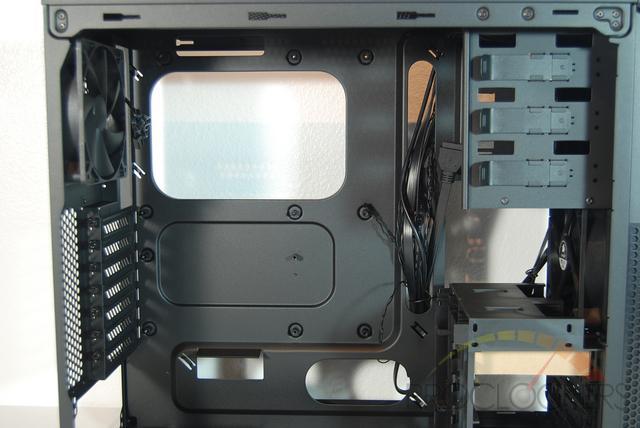 For storage there are four bays for 3.5” drives and four more for 2.5” drive. The 2.5/3.5” drive cages can be removed to better support longer video cards. With the cage installed the cage supports cards as long as 300mm and without it the length grows to 430mm. 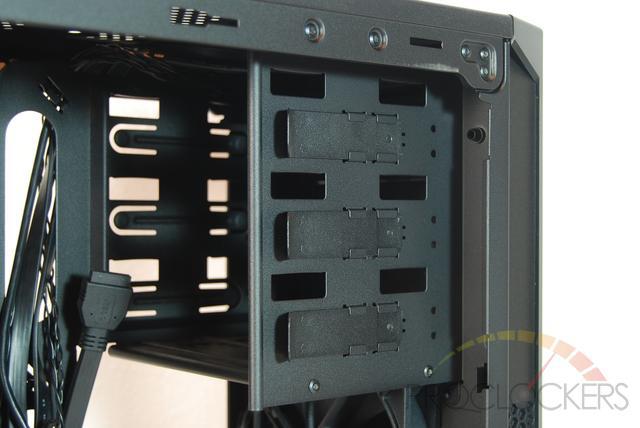 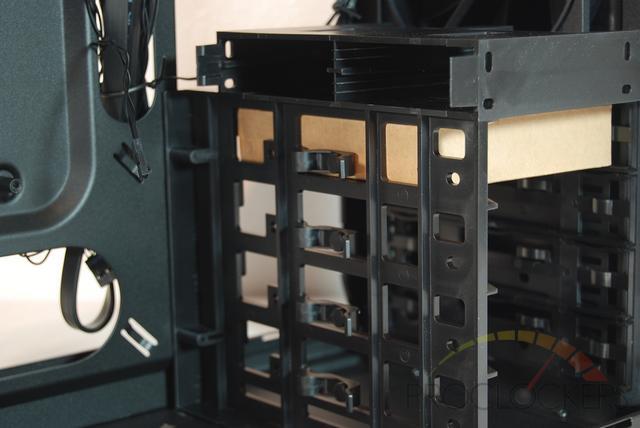 Each of the drives including optical devices is secured using plastic mechanisms. The optical bays have these brackets pre-installed and the ones for the smaller drives have to be mated to the drive first and then sled into place.

Upfront is a single 120mm cooling fan with the option to add a second 120mm if user so desire. To help protect your precious components there is a dust filter mounted upfront as well. But in order to access the fan mounted here or to even clean the filter the front fascia needs to be removed. 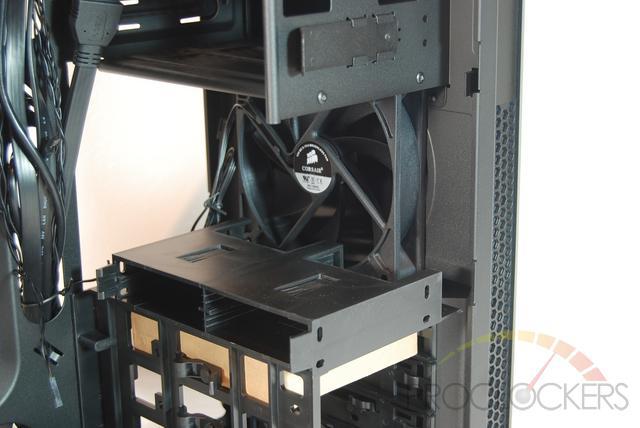 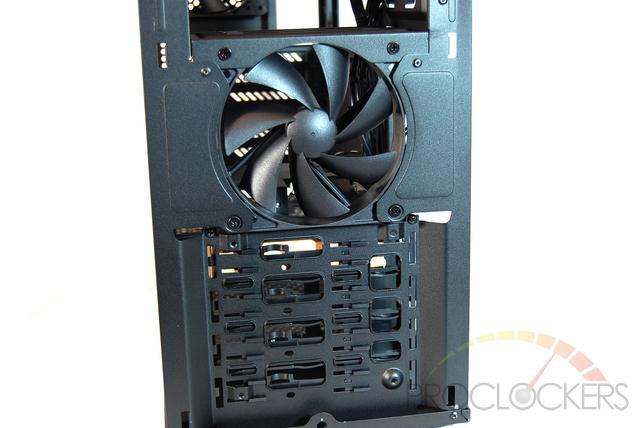 Looking at the top of the case from the inside you can see how easy it would be to install one of their AIO coolers. 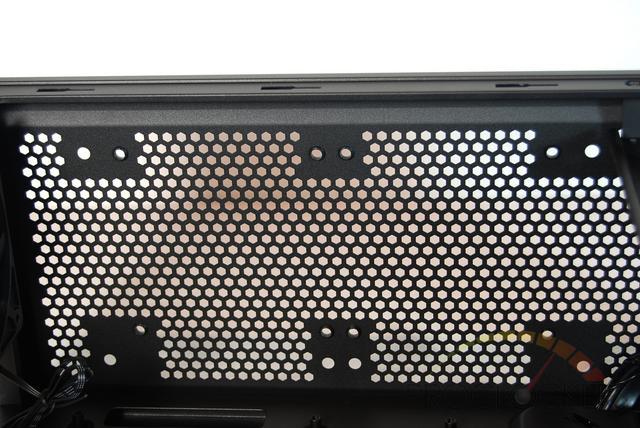 Even in a cost effective case Corsair aligned all the expansion slots with thumbscrews and not the simple screws we often see in many cheaper cases. 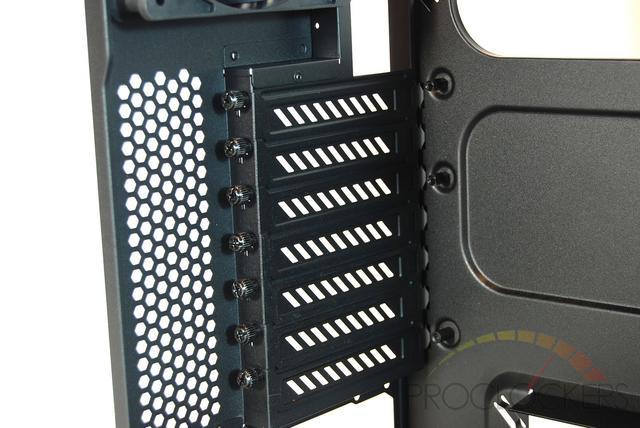 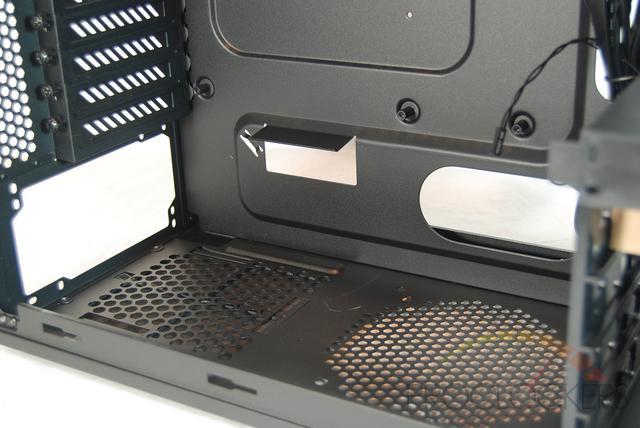 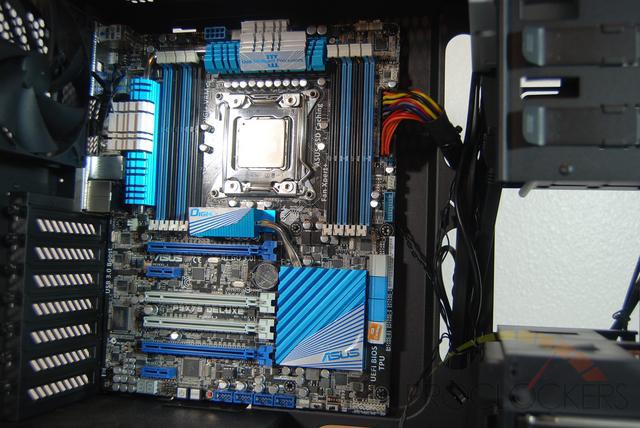 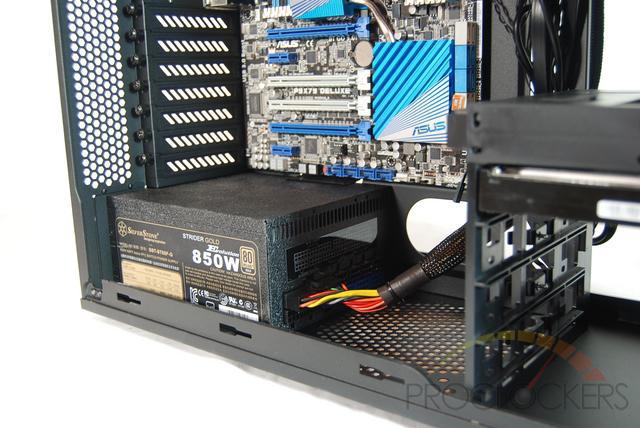 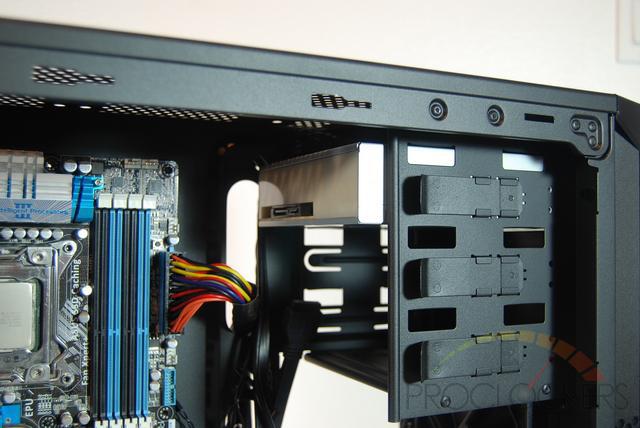 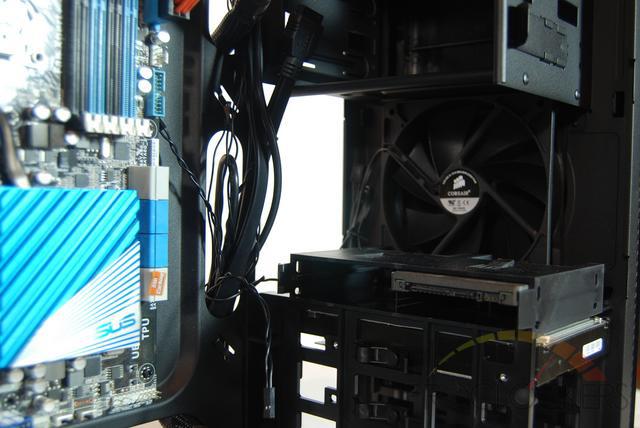 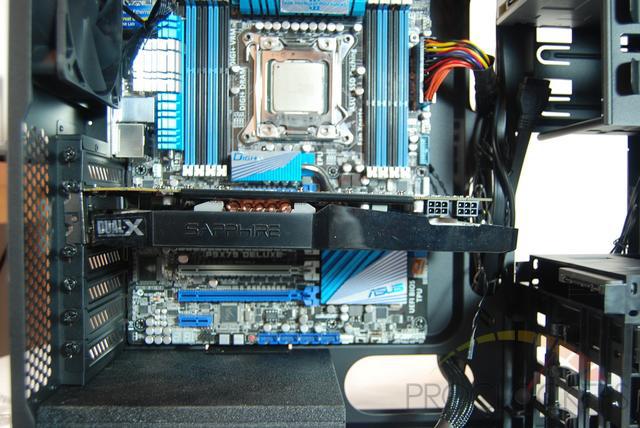 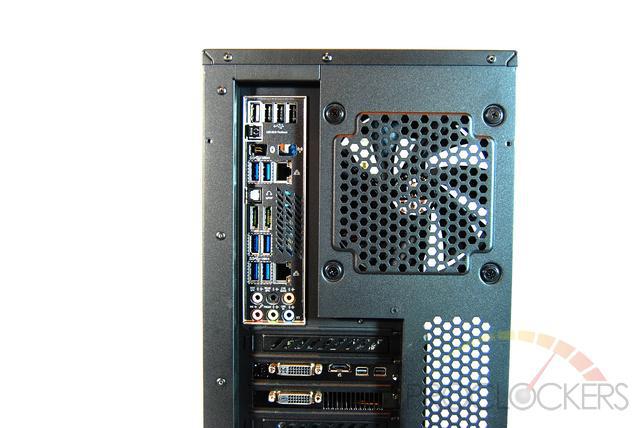 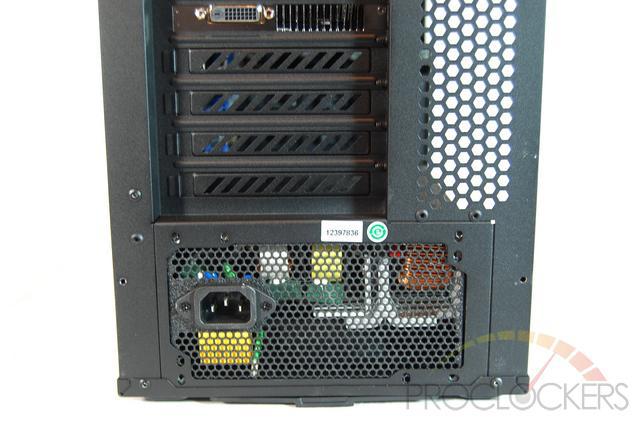 Corsair did an outstanding job with the Carbide 200R. It isn’t that often that you are grace with so many extras in a $60 PC tower. There are many cases in this price range to choose from and most of the time it comes down to features, looks, ease to build or simply company rep. and with the 200R you get all that plus some.

The Carbide 200R doesn’t have that out-of-the-way gaming styling nor does it have all the bling that many companies try to all to a cheaper priced case to get it to sale to the masses. The 200R is very simple and down-to-earth. Visually speaking. The subtle looks can be liked by many and can fit the needs of more than just one type of PC user. Need a gaming rig? You can achieve it with the 200R. Need a new system for the office? You can build it with the 200R. Need a system for the wife so she doesn’t occupy time on yours? Get a 200R.

The 200R isn’t going to get you a HDD dock or hot-swap racks. It’s not going to give you any fancy fan controllers or crazy lighting. But the 200R is a full-featured case as it comes with all the essentials needed to assembly a nice system. Rubber grommets for fans, even ones not included. Every space for fans to create a mini tornado inside the box it seems. Everything is tool-less except the installation of the motherboard. Installing of any drive-type is a breeze and only takes a second. The list continues with dual USB 3.0 ports upfront, dust filters and even vented slot covers.

We can go on and on about what we like about the Carbide 200R but we figured we would stop it here and make you read the body of the article and not just the conclusion to find out what the case has to offer. We are praising this little case for all the things it has to offer but there are some minor things we saw that would improve the case as well. For one we felt there was very little room in the top of the case if you elect to install a rad thicker or wider than the ones Corsair use on their own AIO kits. So, if you want to use a 140-type there is little room between the top of the case and the motherboard. Same thing applies if the rad is thick.

We would like to thank Corsair for sending over the Carbide 200R for us to take a look at. We are awarding it the two awards here today.