We used Intel’s space heater CPU, the i9-10900k. The i9-10900k is capable of clock speeds of 5.3GHz, but all that extra power can consume up to 250 watts and hit an insane 100 degrees Celsius on top of the line custom loops. Even LN2 pros had a rough time handling this beast. So, we’re going to throw the Cougar 280mm at it and see if we roar like a Cougar or Meow like a Hello Kitty. First, we test our idle temps, letting it run idle for about 3 hours. The Aqua 280 was able to keep the i9-10900k at a “chilly” 36 degrees Celsius. By running a fan speed test, we were able to hit a max of 1880rpm and a low of 558rpm. While running, fan noise wasn’t too bad and only resulted in a soft hum. Pump noise was also comparable in terms of noise and only let off an audible soft hum as well. Once reaching 100% fan speed, there was a weird change in temps. Usually, higher fan speeds would result in a lowered temperature, but I found the temperatures had actually risen to 38 degrees Celsius and remained at 38 degrees or higher for the rest of the testing period. 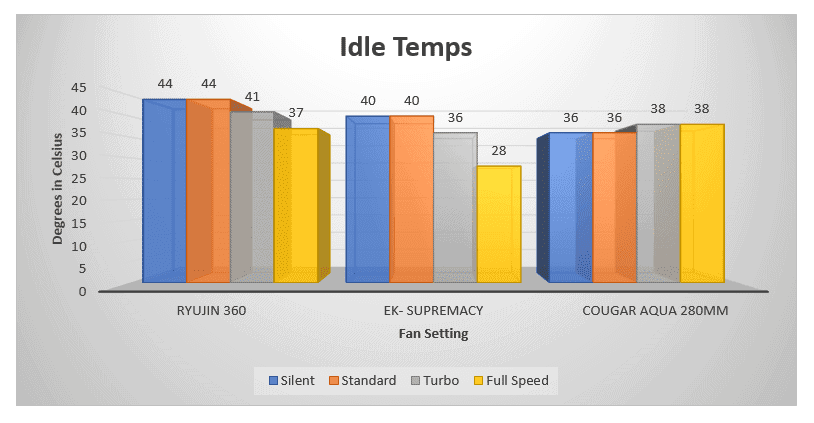 In this instance, Standard and Silent will be the same for the Aqua 280mm, as the lowest setting available is 20%. A custom loop is able to go lower or even stop because the CPU header controls it. It’s better for this AIO to plug it into the CPU header, as custom loops usually have many more fans. At the start of the test, the Aqua reached a temperature of 36 degrees Celsius.  I kept this data in because, during most of the idle time, it remained at 36 degrees Celsius. But, I believe the room started to heat up as the sun was rising and contributed to the 2-degree rise in temperature. Ambient temperatures can sometimes have an effect on data results. For example, if I were to do this test in the winter, I might actually have lower temperatures of 34-35 degrees Celsius! 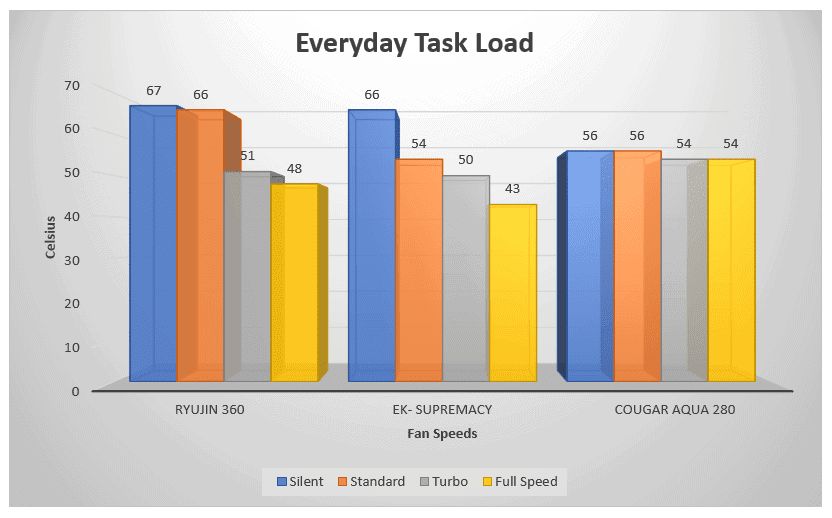 Next, I wanted to see what kind of scores I would get in CinaBenchR20. 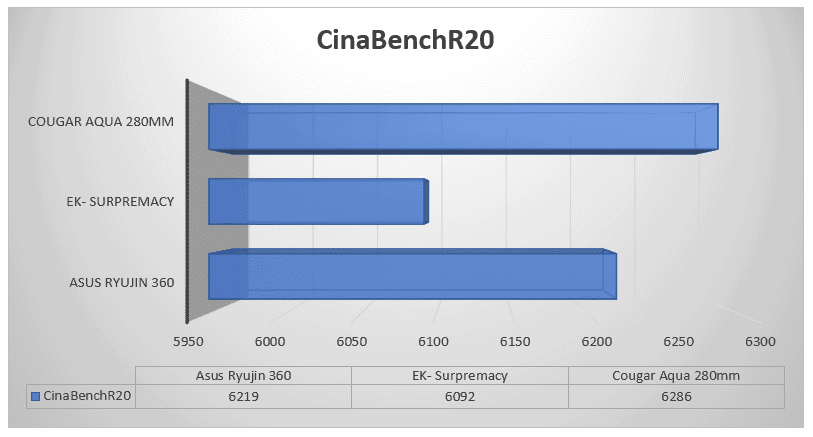 The Aqua Actually beat out both Ryujin and EK coolers. 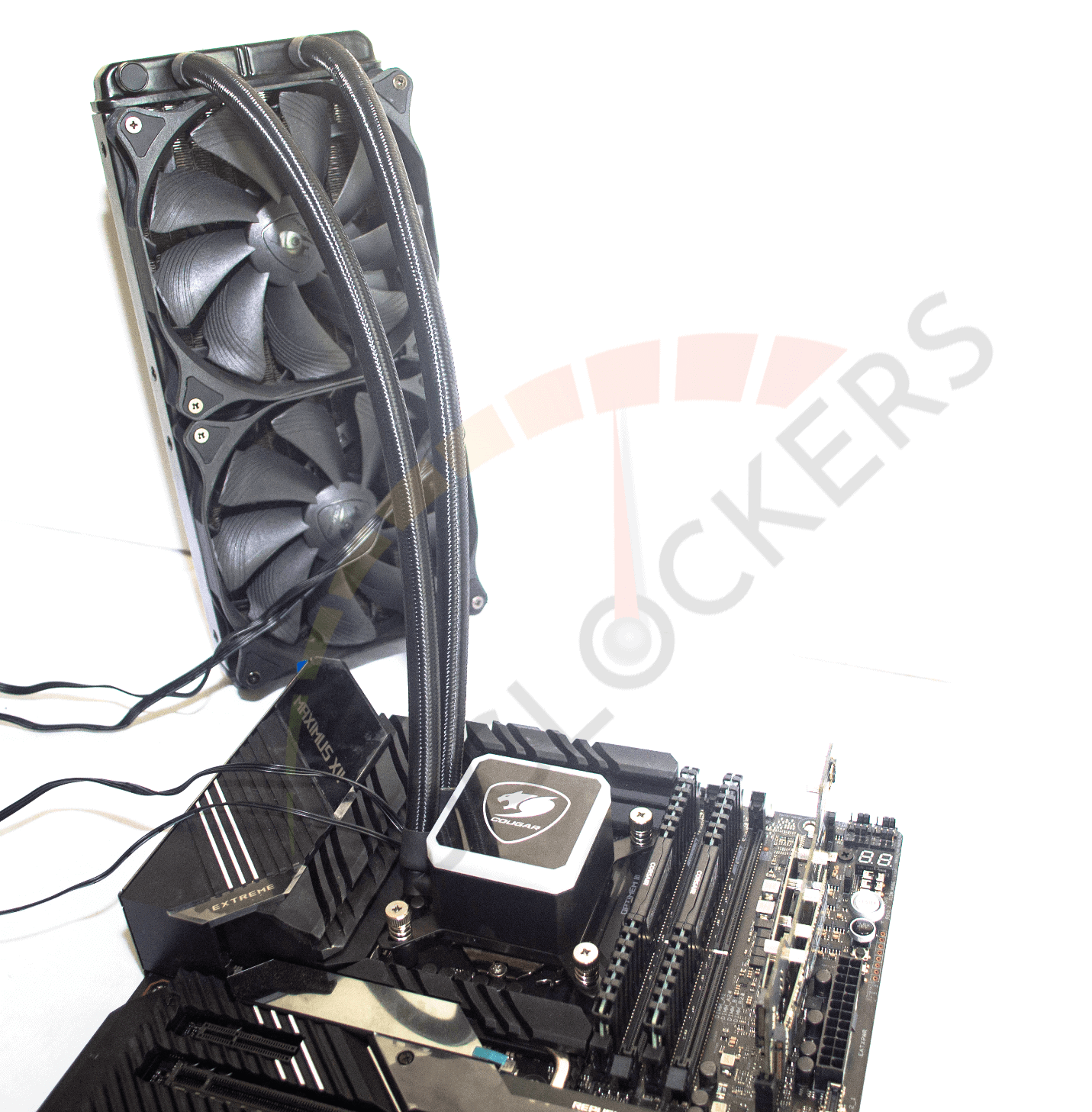 This was done on the Asus Maximus Extreme XII, using 3200mhz 16 Corsair Ram and the i9-10900k. The test was done 5 times, with 6286 being the medium number. How could this be? A theory I have could be that there is no wasted cooling space on the copper block of the Aqua 280. The Ryujin and EK, on the other hand, have extremely big cooling plates. In this case, maybe bigger isn’t always better. The Aqua’s cooling plate may be perfectly attached on top of the main heat junction of the CPU, although this is just my own speculation. There has to be more of a reason for such a surplus in performance from the Aqua.

In testing the overclocking abilities, I attempted a 10 core 5.1 overclock first to get the CPU ready for punishment. Using Intel’s Xtreme Utility, I adjusted the core multiplier for the first 5 to 51x and adjusted the processor cache ratio to 45x, slightly raising the offset in voltage to make sure it had more than enough resources to tap into.  Rerunning Cinabench, I had trouble getting to 5.1. The clocks wouldn’t go over 5.03 and resulted in a score of 4395 due to the current being limited.

In XTU, this is used as a fail-safe. All systems will attempt to lower the power consumption when asked to do processes at higher clocks, and temperatures will remain at safe levels before shutting down and rebooting. To get passed this in overclocking environments and XTU, we first must disable Turbo Boost Short Power Max. This is considered the 2nd fail-safe. It will try to sustain the absolute highest power consumption for a very short period of time to compensate for the possibility of draining all the power from your system under extreme loads. Disabling this puts your CPU in a position to be severely damaged and should only be done during testing where extreme constant power is needed. Today, I would rather not do a full review on how to break your CPU! Maybe in another review.

In the end, I was able to make sure there was no throttling and even surpassed my own record in Cinabenchr20 and in TDP used. As shown below, I attained a Cinabench score of 6464, which is my highest yet! It reached an amazing 305TDP with temps reaching 92C, and all ten cores were running at 5.13GHz.

Unfortunately, that’s as high as she’ll go through. Any higher, and there is no doubt the CPU would be damaged, and we at Proclockers would rather not damage it by surpassing 5.3GHz.

Cougars Aqua 280mm, is a very impressive AIO cooler. It is extremely light and easy to install, and the included controller is helpful and offers many different options for lighting up your case. However, I wish Cougar included a software version too because it would be nice to control the lighting from my computer instead of reaching for a remote.

The cooling power is perfect for those who don’t plan to break any records and want to get the right amount of extra performance out of their CPU. I was unable to get the beast i9-10900k to reach its fabled 5.3GHz. This would mean risking the i9 by hitting temperatures well over 90C by turning off safety measures. Aside from that, this cooler offers a near-silent liquid cooling solution without having to spend $1000 or more on the individual parts required to make a cooling loop. I think that most users will enjoy the Cougars Aqua 280mm because it is a worry-free solution to keeping noise and temperatures down.

Cougar Aqua 280mm comes in a very competitive $99.99 on Amazon. With 280mm being rare and certain similar AIOs costing nearly $20 more. This is a perfect budget gamer, power user AIO, and even able to compete with 360s. I think that those who are using a smaller PC case will find that the 280mm might be the perfect fit for their setup.

Overall, I give the Cougar Aqua 280mm an 8 out of 10 rating. Performance and cooling are great for medium to heavy loads, and installation was super easy. My only reason for giving it an eight instead of full marks is due to the lack of software control for both the fans and RGB. Hopefully, Cougar comes out with their own software to appease people like me who aren’t all that into using the remote control. All-in-all, well done Cougar!