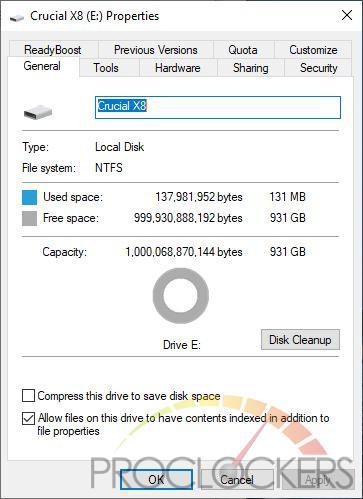 Windows shows us 931GB of space available after formatting.

A HDD/SSD utility software which supports a part of USB, Intel RAID, and NVMe. 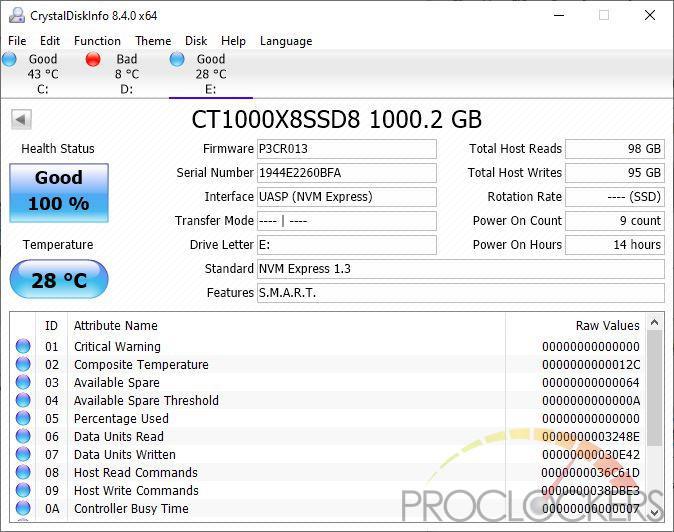 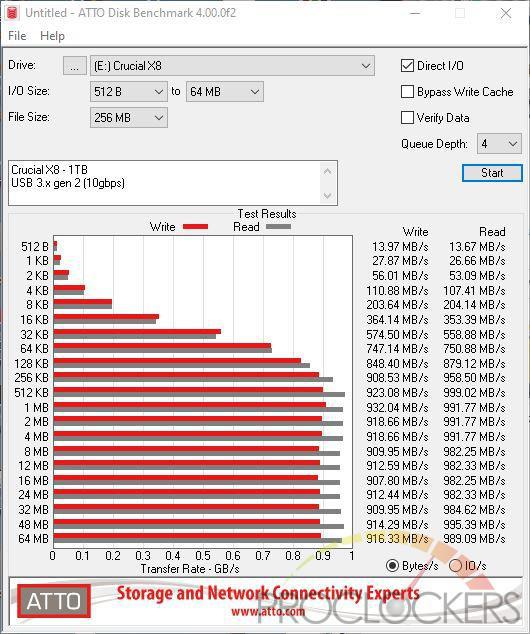 Atto gives us very close to the rated 1050MB/s on reads with writes only trailing slightly, off to a good start! This is really slamming the limits of 10gbps USB and every USB controller is different, so missing the 1050MB/s by less than 60MB/s is close enough. 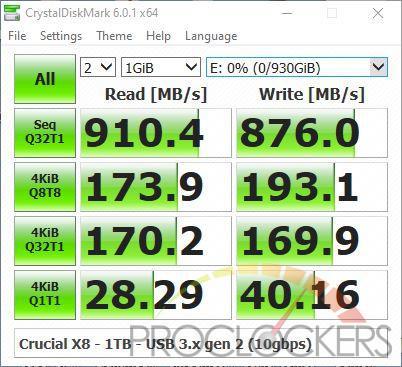 We see speeds just a hair slower than advertised but still one of the fastest USB drives we’ve seen.

Anvil’s Storage Utilities is a powerful tool that was designed in order to provide you with a simple means of assessing the read and write performance of your Solid State Drive or Hard Disk Drive.

The benchmark tool helps you monitor and check the response time of your unit as well as view the system information collected using Windows Management Instrumentation (WMI).

Anvil’s Storage Utilities has been designed to be the most comprehensive benchmark tool for Solid State Drives on the market. That does not mean that you can’t use it for conventional platter-based drives as well, but you do get the most out of the program when you test the speed and performance of SSDs with it. The program has gone through a series of beta and release candidate builds already and is currently available as Release Candidate 3. It is usually linked from this forum thread, which currently is not the case for the RC build which you can download here directly. You can’t use previous builds as they are set to expire automatically.

You can run a benchmark right away by selecting a drive from the menu at the top right or check out the settings first to make sure everything is configured correctly here. Here you can simulate a compression level of the test file, e.g. database, application or uncompressed, and whether you’d like to use the same test file on consecutive runs or generate a new one every time. As far as benchmarks go, you can run a standard SSD benchmark that is testing read, write, or both performances of the drive, or run threaded IO benchmarks only. 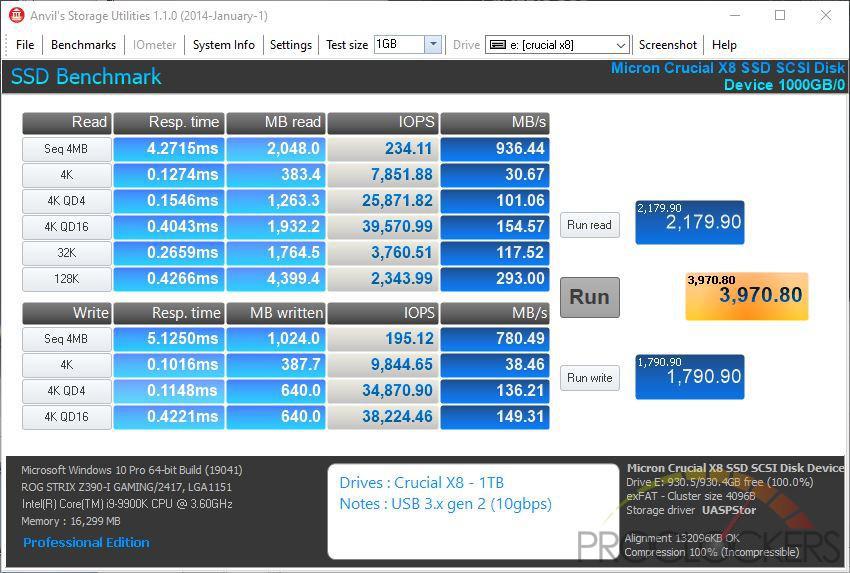 Anvil shows a little lower on the sequential speeds like normal but shows very fast response times (low latency) and manages the best score we’ve ever gotten on a USB drive.

The synthetic tests determine the sequential and random read and write performance of the SSD. These tests are carried out without using the operating system cache. In Seq-test the program measures how long it takes to read a 1 GB file to write respectively. 4K test the read and write performance is determined at random 4K blocks. The 4K-64 corresponds to the test Third 4K procedure except that the read and write operations are distributed to 64 threads. This test should SSDs pose with Native Command Queuing (NCQ), differences between the IDE operation mode where NCQ is not supported, and the AHCI mode. The additional compression test can measure the power of the SSD in response to the compressibility of the data. This is especially for the controllers that use to increase the performance and life of the cell compression, important.

In the first three synthetic tests and the compression test, the size of the test file 1 GB. Finally, the access time of the SSD is calculated, wherein the access to read over the entire capacity of the SSD (Full Stroke) is determined. The write access test, however, is done with a 1 GB big test file. 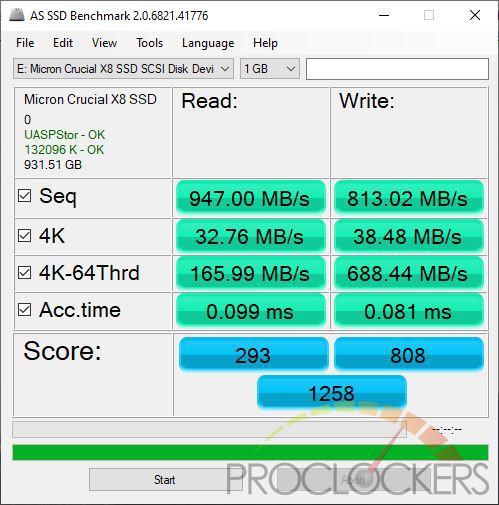 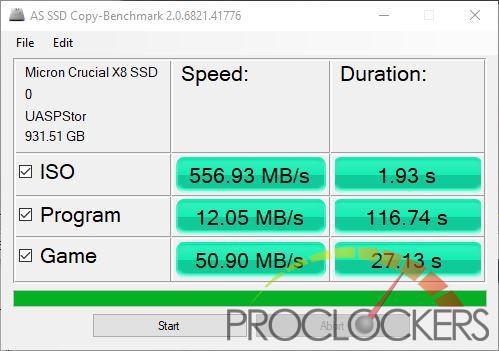 The copy benchmarks really choke on the Program and Game segments for some reason. We tried rebooting, and about everything but kept getting the same results here. This is the only test we saw an anomaly in testing, so we’ll call it just that. 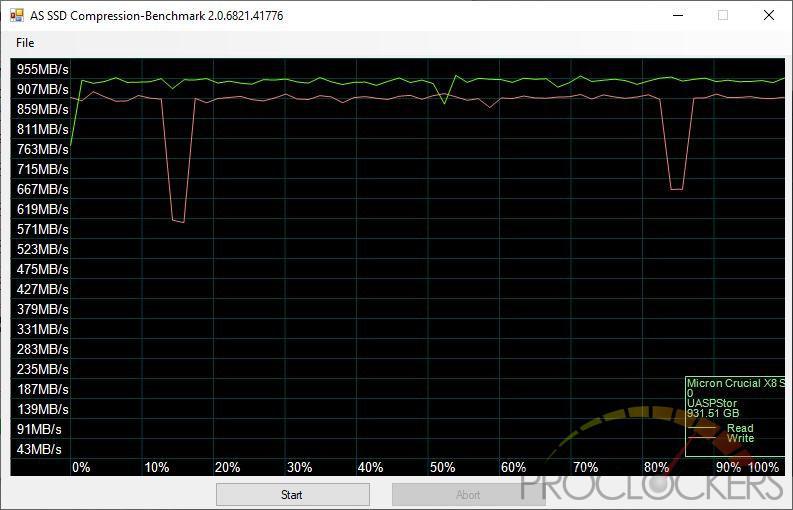 On the compression segment, we see sustained fast and stable read and write performance across the entire drive.