The AORUS Graphics Engine is a software that allows the user to overclock their AORUS graphics card and set the RGB lighting to their personal taste. There are 3 preset modes and a user mode where you can set your own clock speeds. The 3 preset modes are Silent Mode, Gaming Mode, and OC Mode. The clock speeds for each mode depend on the card in use. The AORUS GTX 1080 Ti has a clock speed of 1582 MHz in Silent Mode, 1721 MHz in Gaming Mode, and 1746 in OC Mode. With the RGB Fusion controls, you can set your AORUS graphics cards to sync up with your AORUS motherboard and the AORUS High Bandwidth SLI bridge. 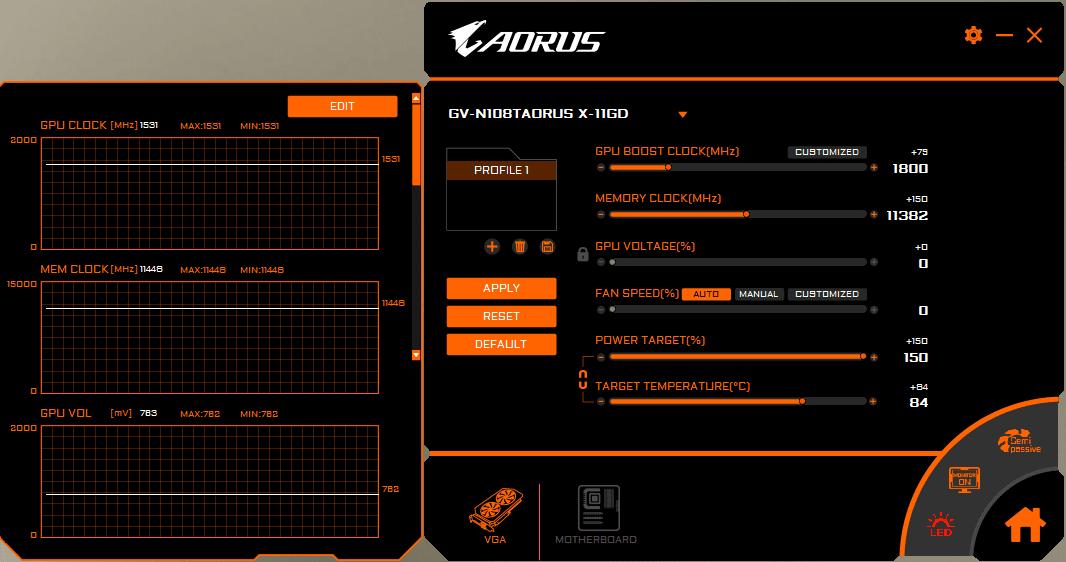 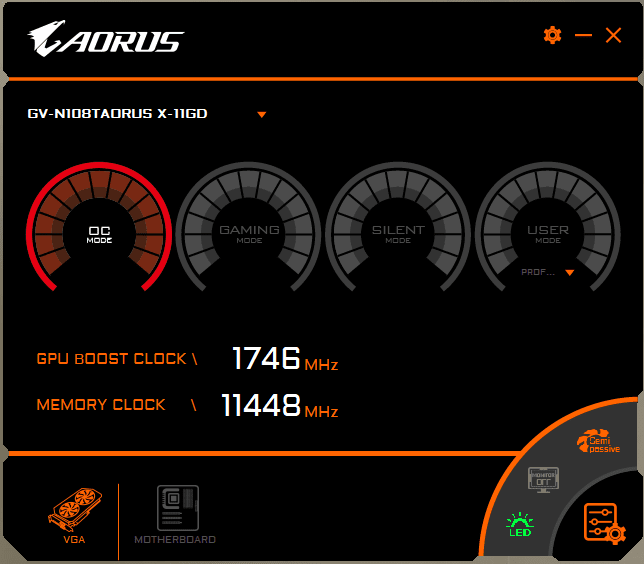 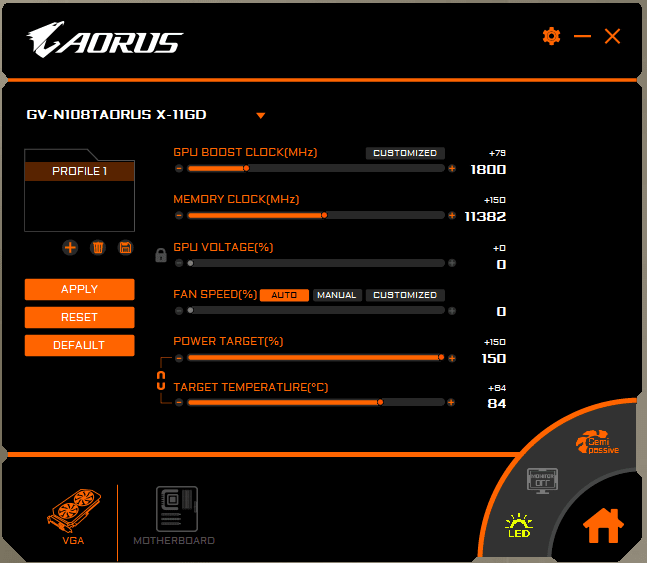 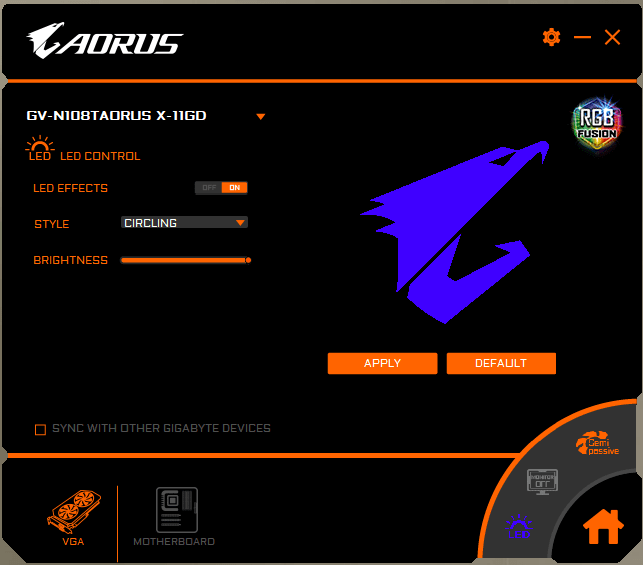 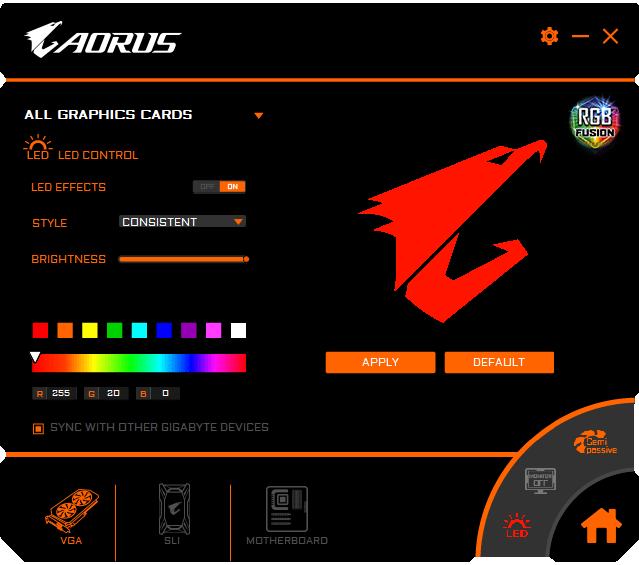 With 16.8M customizable color options and numerous lighting effects, you could now choose the right scheme for your gaming rig through AORUS graphics engine.

I used the AORUS Graphics Engine for overclocking the AORUS GTX 1080 Ti, as well as for setting the RGB lighting on the cards, High Bandwidth SLI bridge, and on my AORUS Z270X Gaming 5 motherboard. The AORUS Graphics Engine has 3 preset modes and a user mode. The preset modes are Silent Mode, Gaming Mode, and OC mode. Silent mode has a boost clock of 1582 MHz. Gaming mode has a boost clock of 1721 MHZ, and OC Mode is set to 1746 MHz. In the user mode, you can set your own core clock, memory clock, voltage, power limit, fan speed (%), and temperature limit. In user mode, I got the clock speed up to 1800 MHz. However, with how GPU Boost 3.0 works, the AORUS GTX 1080 Ti boosted to 2025 MHz which is very good for a 1080 Ti. The card did seem a bit warm, maxing out at 72°C, but compared to the 77°C on my Founders Edition card, 72°C is much cooler. Also, in comparison, the Titan Xp ran at a toasty 83°C. This is thanks to the massive cooler on the AORUS GTX 1080 Ti. The card was relatively quiet too. On idle, it ran at about 30 decibels and while under a gaming load, it ran at about 40-45 decibels. Keep in mind that’s also on an open-air test bench 3 feet away from where I sit. 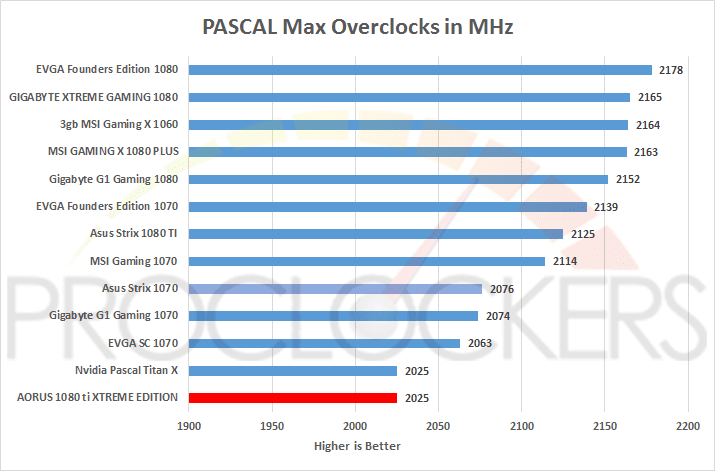 The 2025 MHz clock speed of the AORUS GTX 1080 Ti may seem low for a Pascal GPU. However, for a 1080 Ti, that’s very good. Especially when compared to one of the Founders Edition cards I tested only hit 1962 MHz. 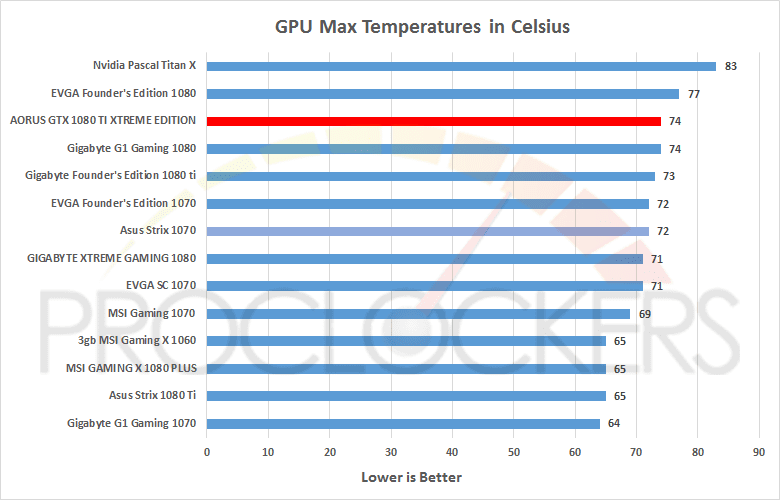