Taking the motherboard out of the anti-static bag, we can see the X570 AORUS Pro WIFI features the same aesthetics as its Z390 counterpart being mostly black with several silver accents. At first glance, we love that they kept all the RGB and fan connections to the top/side of the board. This makes it much easier to maintain a clean look when running fan cables when you don’t have a fan hub. 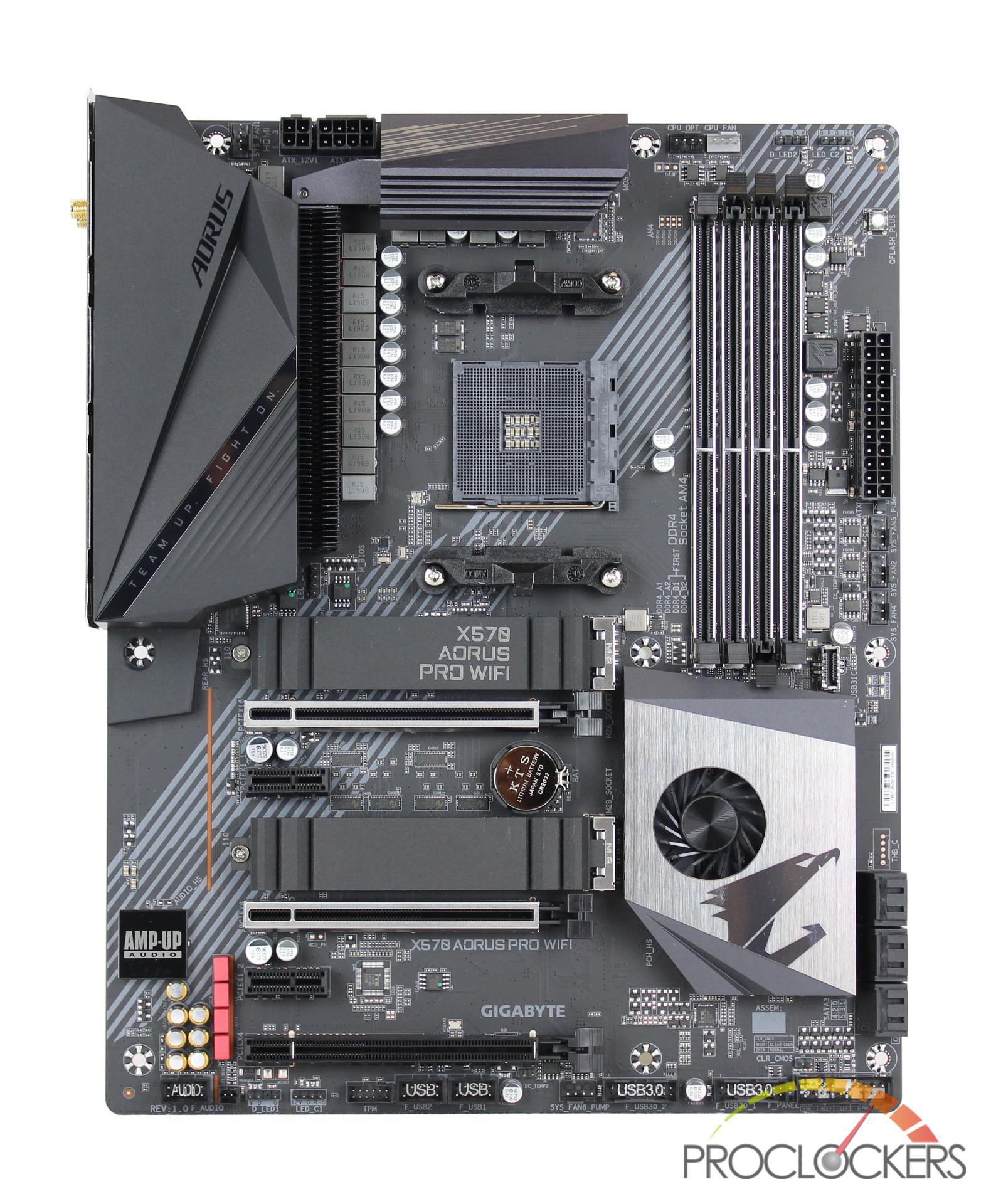 In the right corner, is the board’s I/O shroud with the AORUS name embossed on it with the slogan “Team Up. Fight On.” written on the lower portion. You will notice that the X570 AORUS Pro WIFI has both an 8-Pin and 4-Pin connections for EPS power, which should come in handy when pushing our 3900x to its limits.

Looking toward the AM4 socket itself is a black/silver VRM heatsink as well as two pre-installed cooler brackets, which are used for the AMD Wraith cooler included with your Ryzen chip. 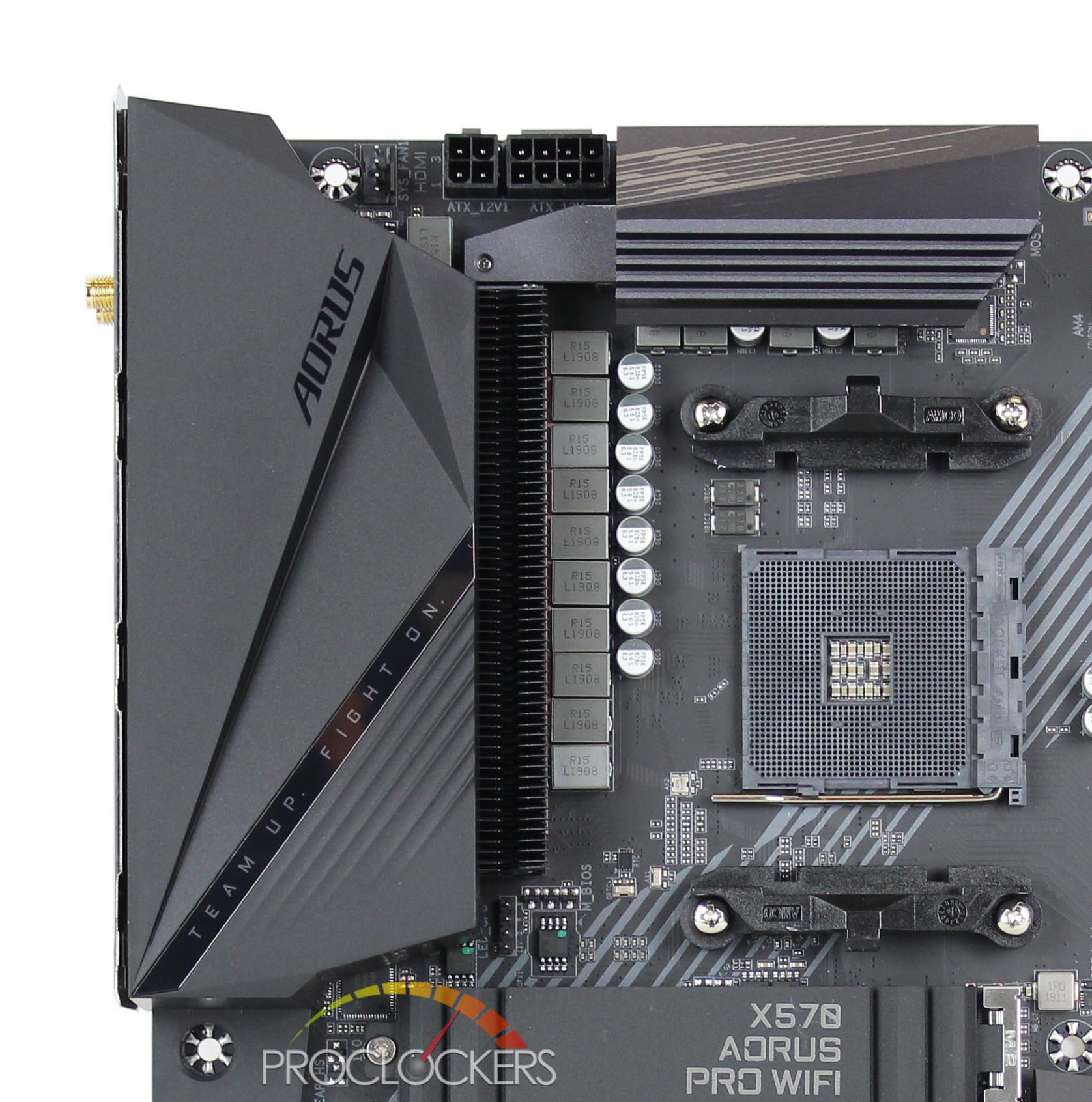 At the bottom left of the board, we find the X570 AOURS Pro WIFI’s ALC1220-VB audio IC with its high-end WIMA and audio capacitors. 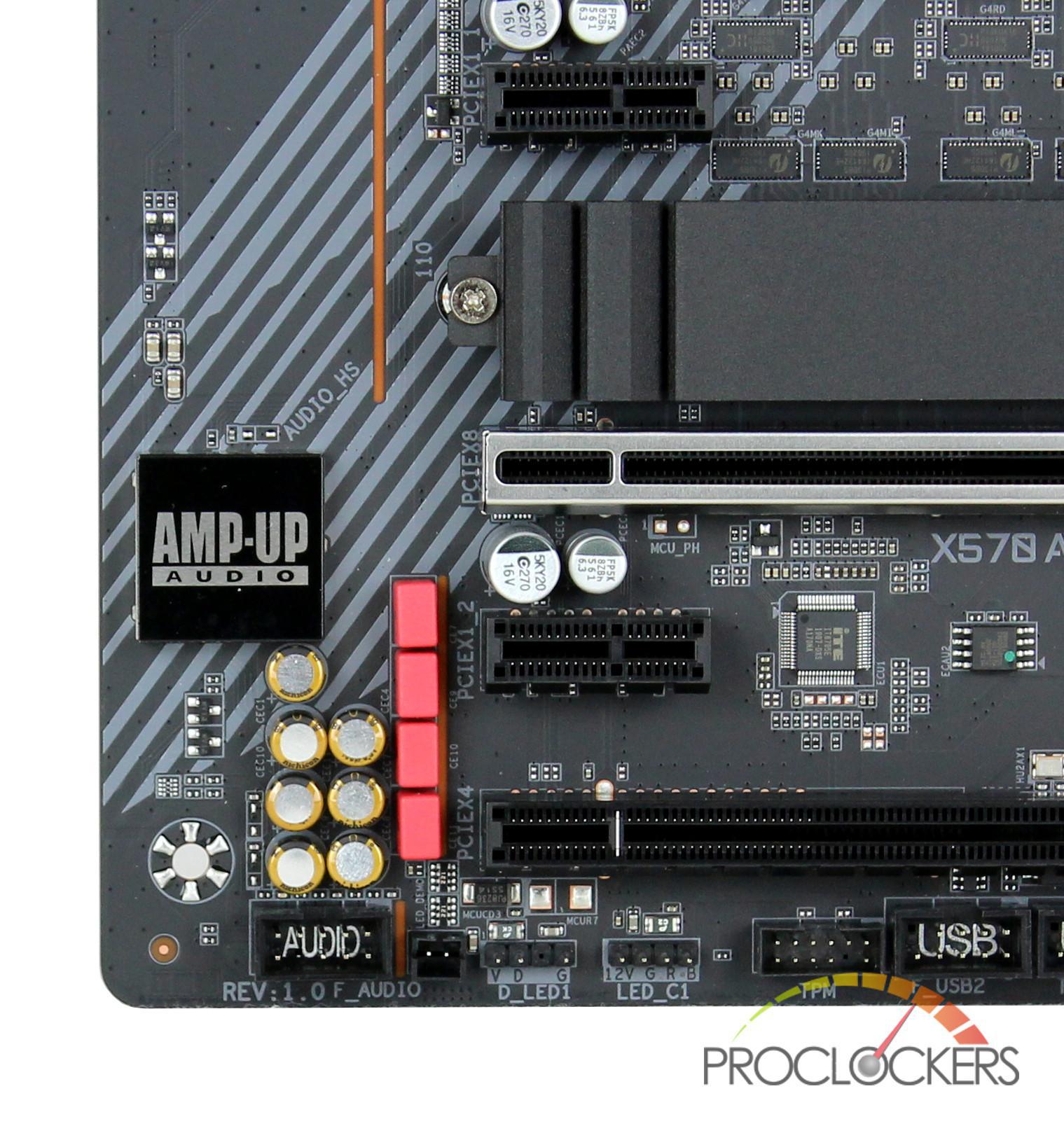 The board’s X570 chipset is covered with a brushed aluminum AORUS branded shroud which includes a little fan to help keep it cool. 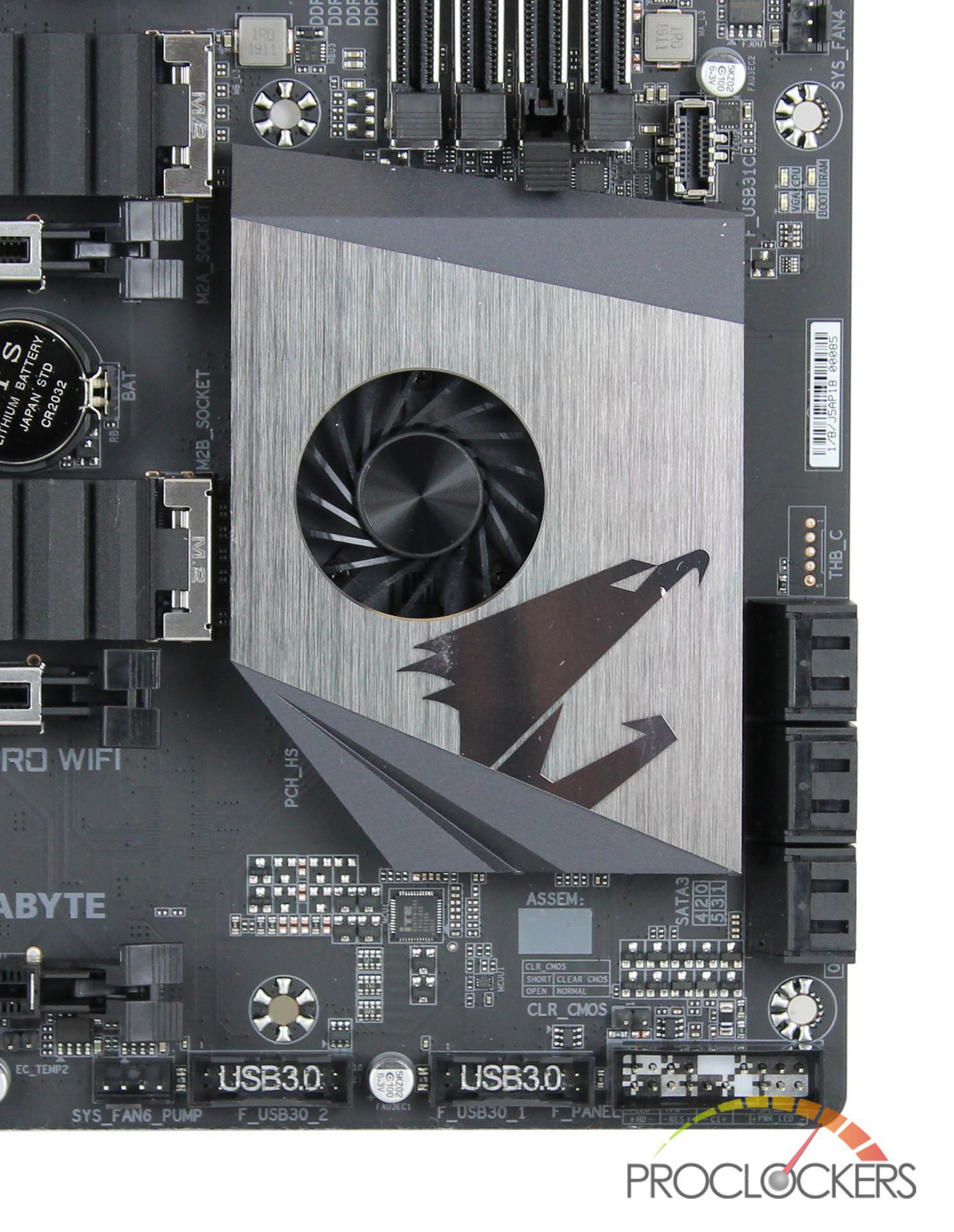 The X570 AORUS contains two PCIe 4.0 M.2 slots which are covered with thermal guard heatsink. It’s also nice to see motherboard manufacturers going the extra mile by adding things like M.2 heatsinks. Not only do they improve thermals but they also look much better than some bare M.2 PCB’s. 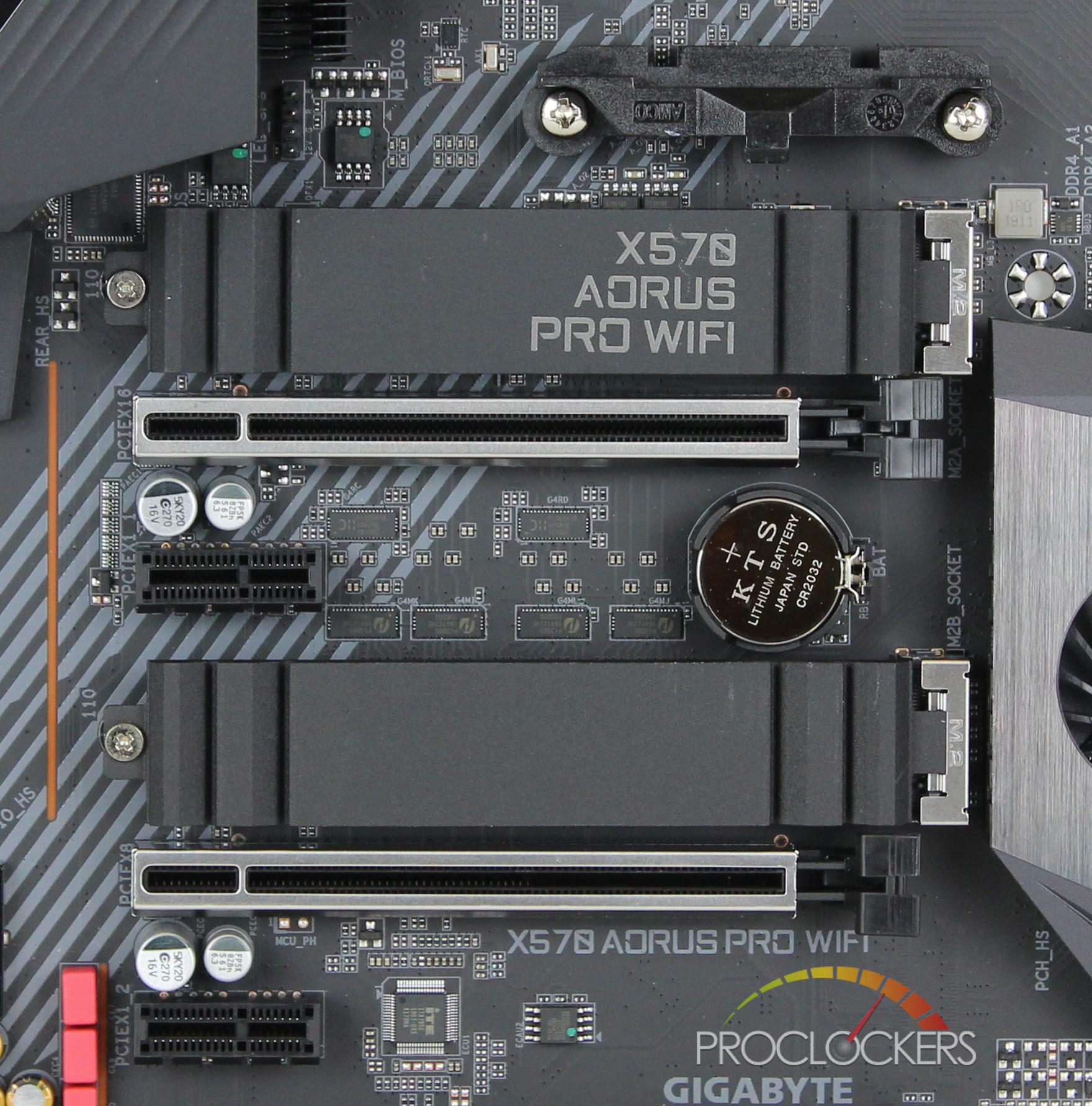 Looking at the back I/O, it’s really nice to see there is no need for an I/O plate as it is built-in. Often I have installed a motherboard into a case and forgotten to install the I/O plate first. The X570 AORUS Pro WIFI contains lots of connectivity which includes (left to right):

The X570 AORUS Pro WIFI also includes stainless steel armor for both the memory slots and PCIe 4.0 slots. This not only looks great but also makes the slots much stronger when installing/removing hardware by preventing the motherboard from twisting/bending. 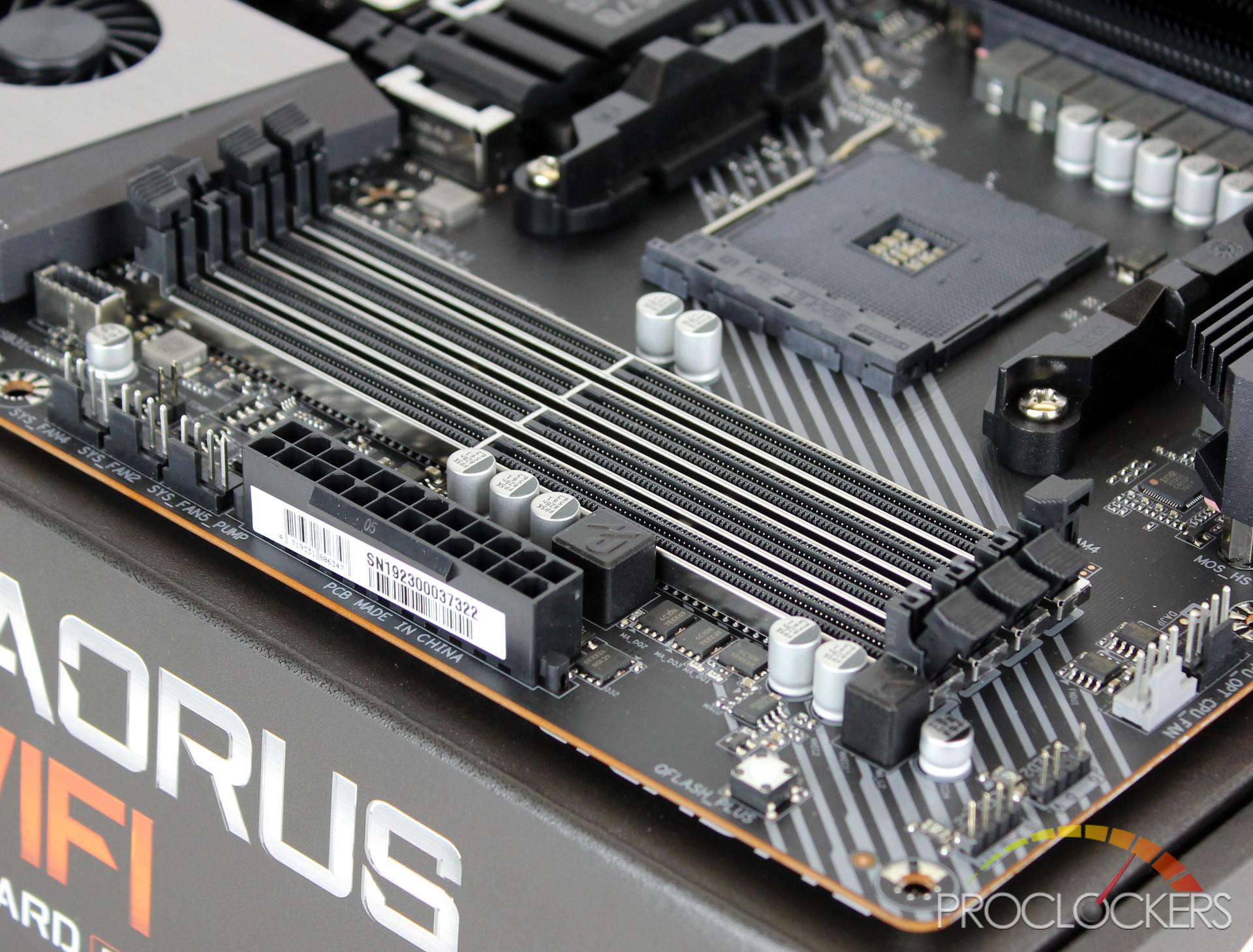 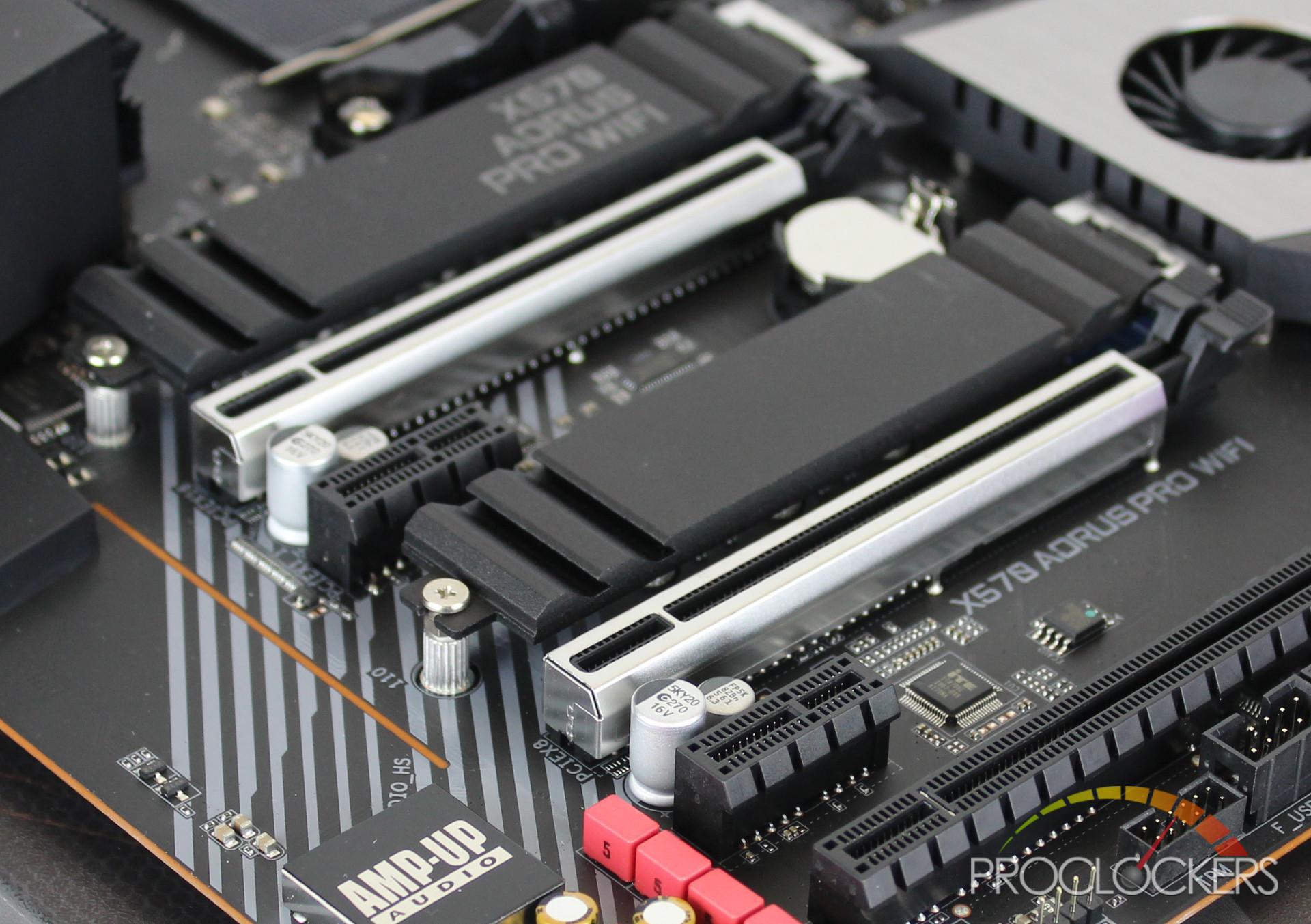 On the lower right side of the AORUS Pro WIFI are the 6 x SATA 6Gb/s ports which have support for RAID 0/1/10.

Flipping over to the back of the X570 AORUS Pro Wifi, we have a bare PCB with a pre-installed processor backplate. 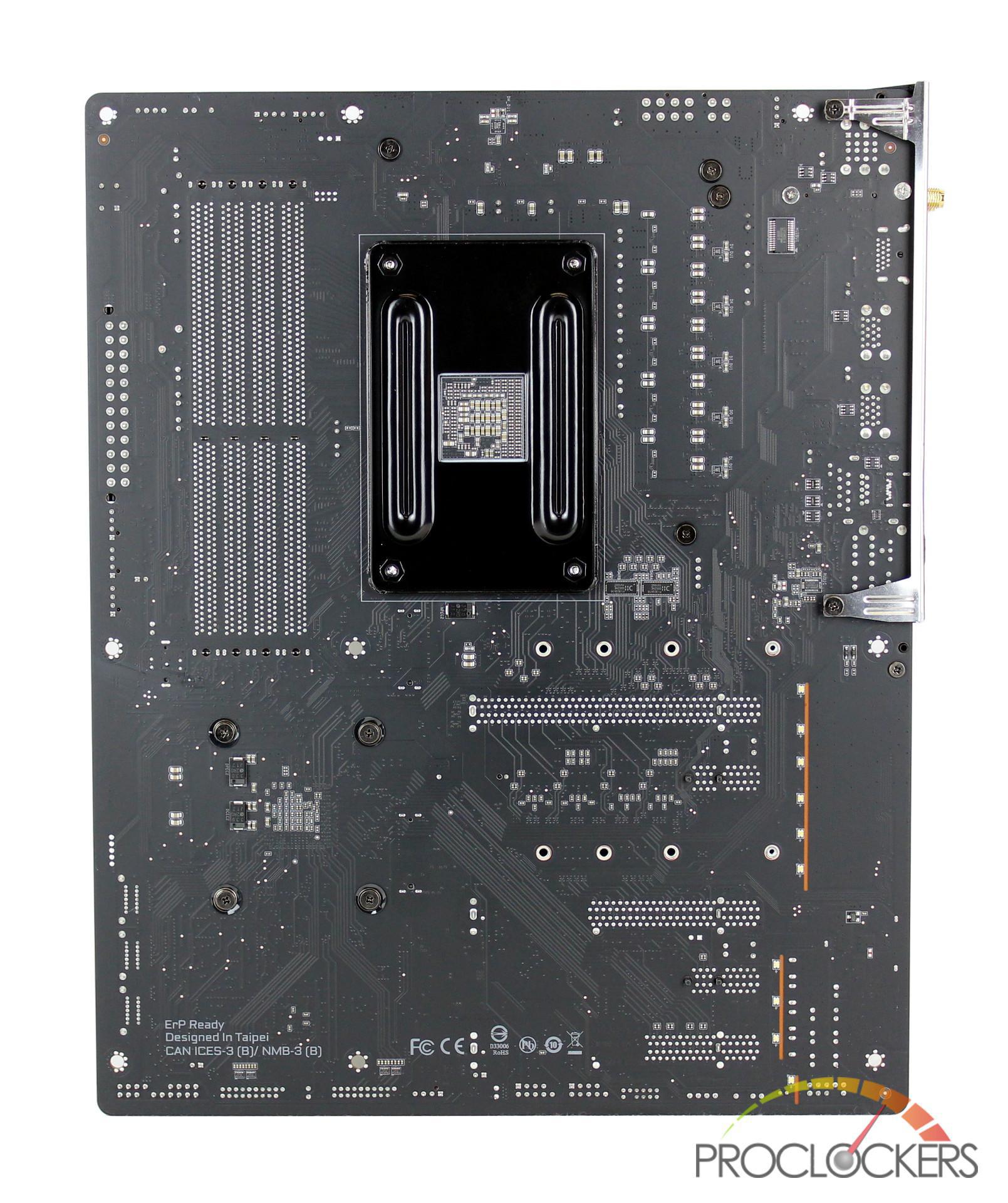 Like the Z390 version of the board, there are also RGB LEDs attached to the board that adds subtle illumination around the audio area of the motherboard. 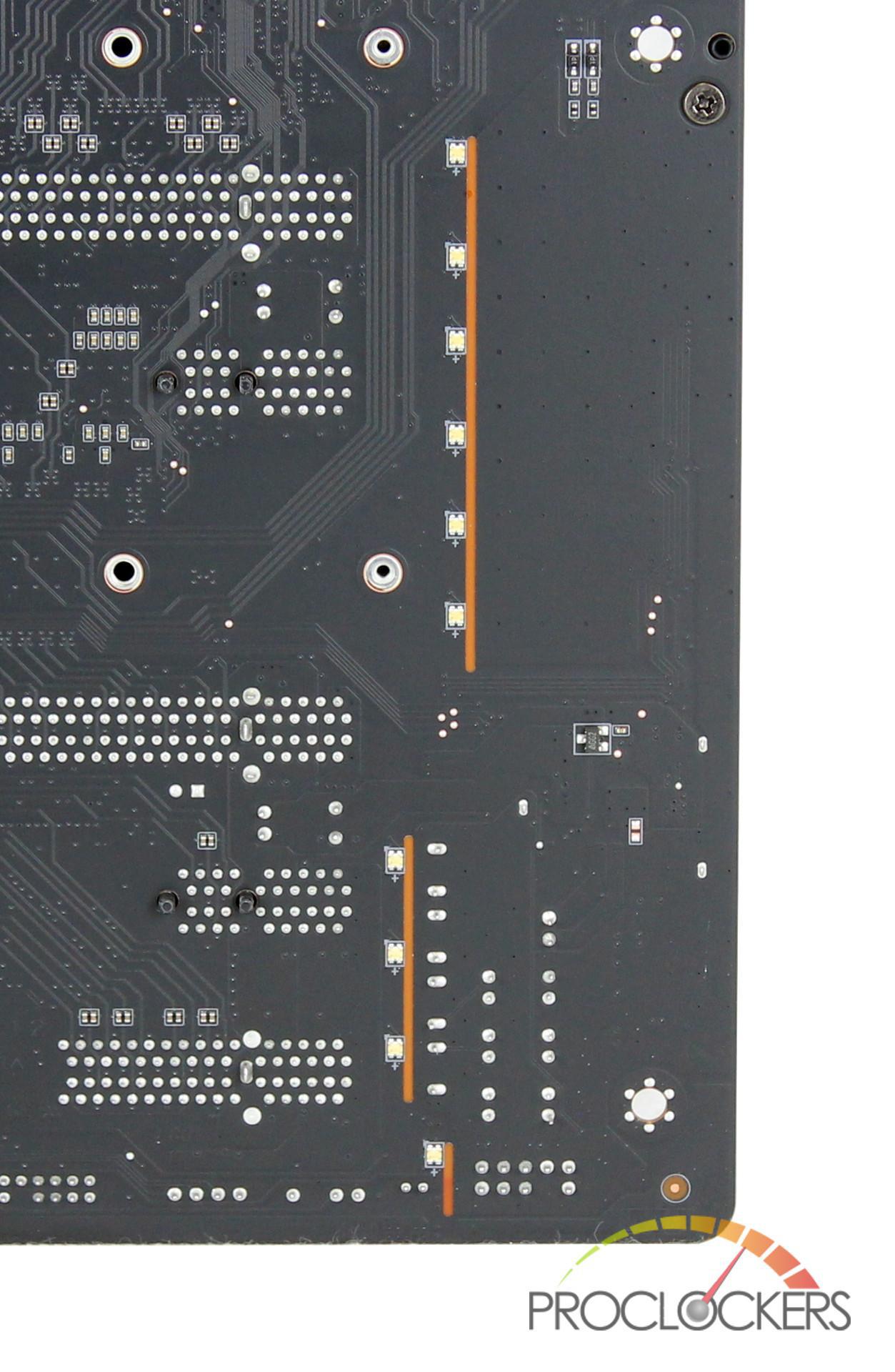 Another nice inclusion with the X570 AORUS Pro WIFI Is the custom AORUS WIFI antenna. It features an adjustable “wing” to help you get the best signal and a magnetic bottom so you can easily secure it to the top of your case. 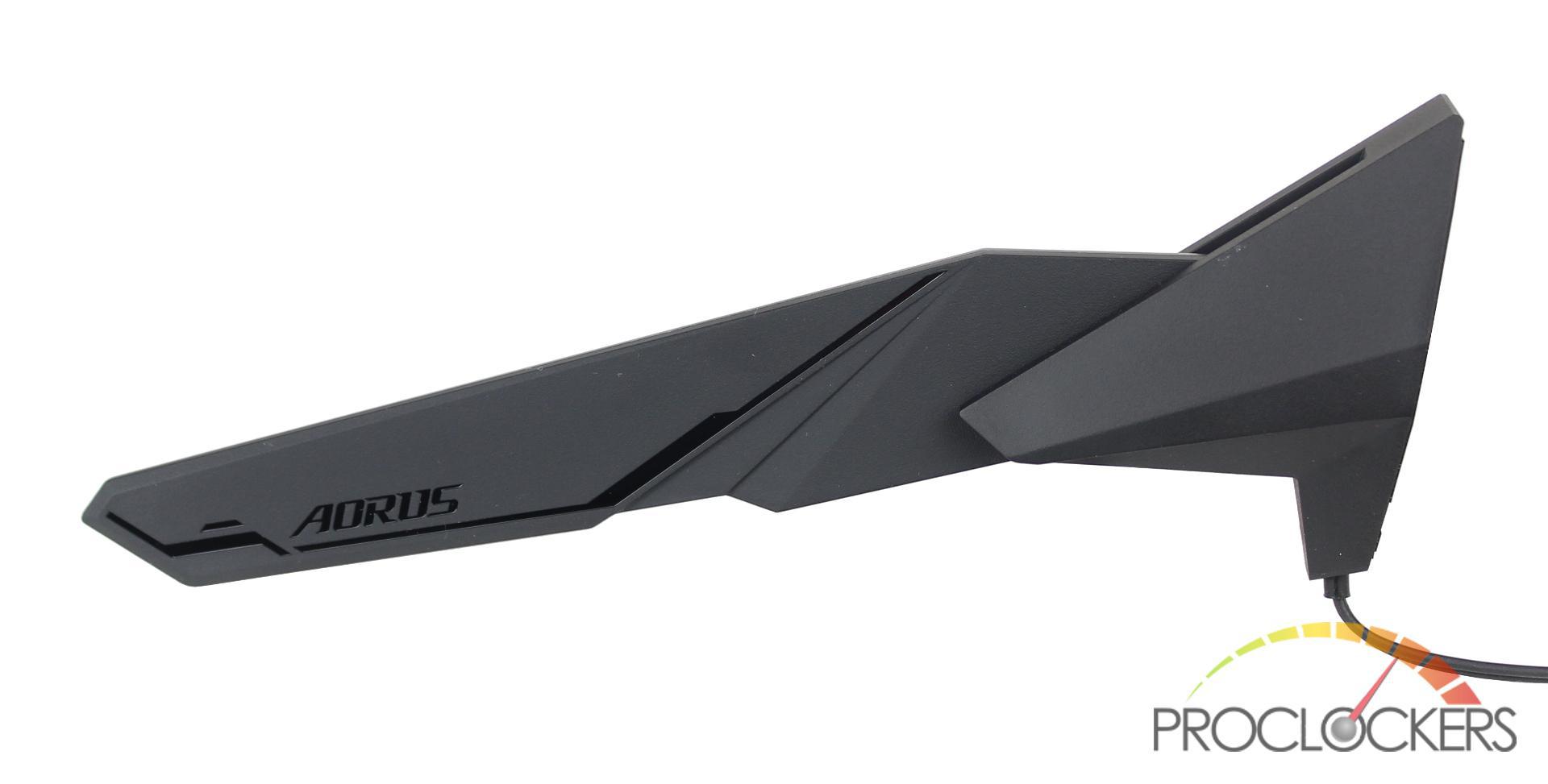 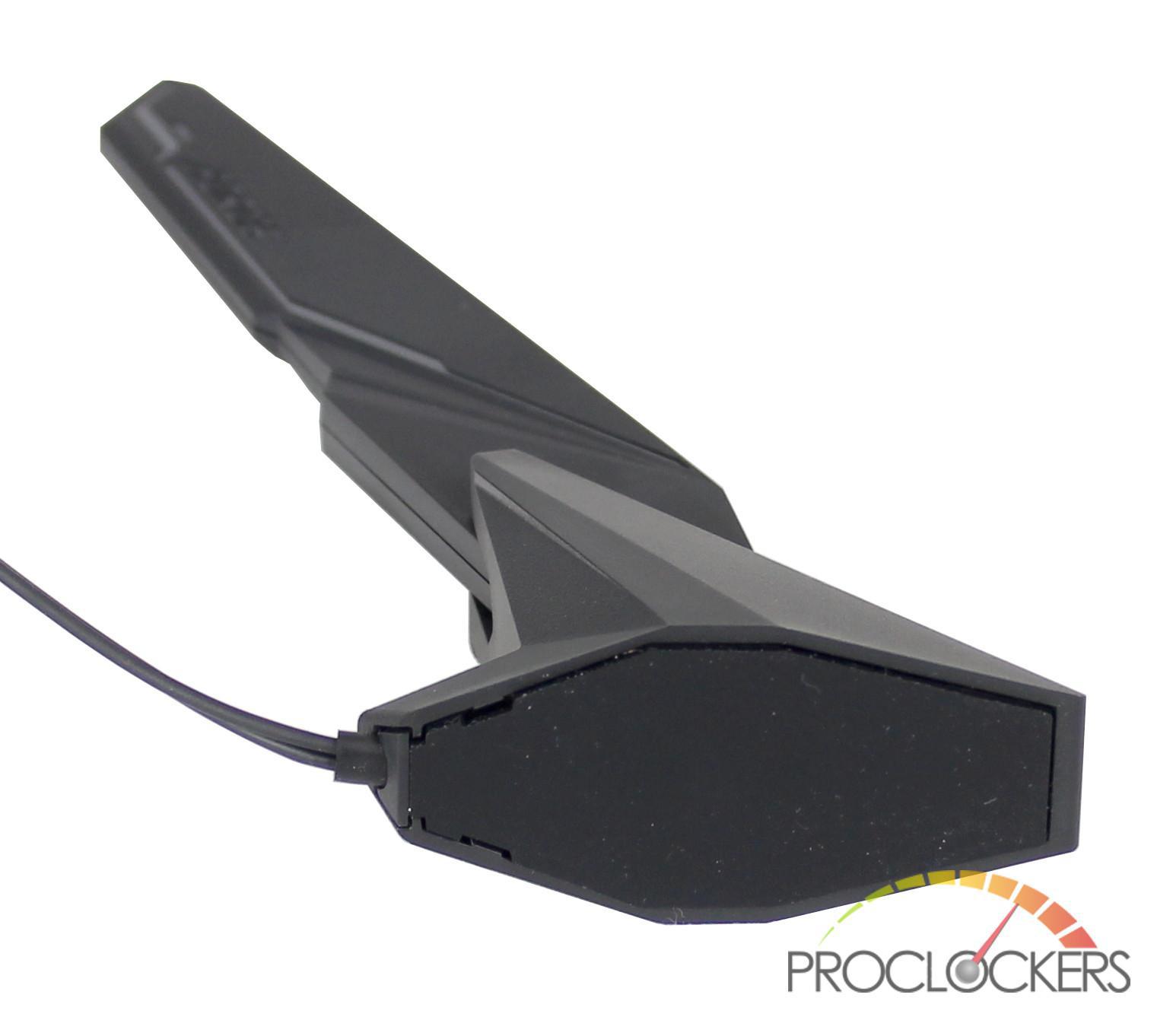 Once we finished installing/booting the X570 AORUS Pro WIFI we got to see its RGB in action. By default, RGB profile defaulted to AORUS orange which was visible on the I/O shroud as well as near the audio components. Since we also plugged the wraith prism cooler into the motherboard, the center fan also got the AORUS orange treatment. 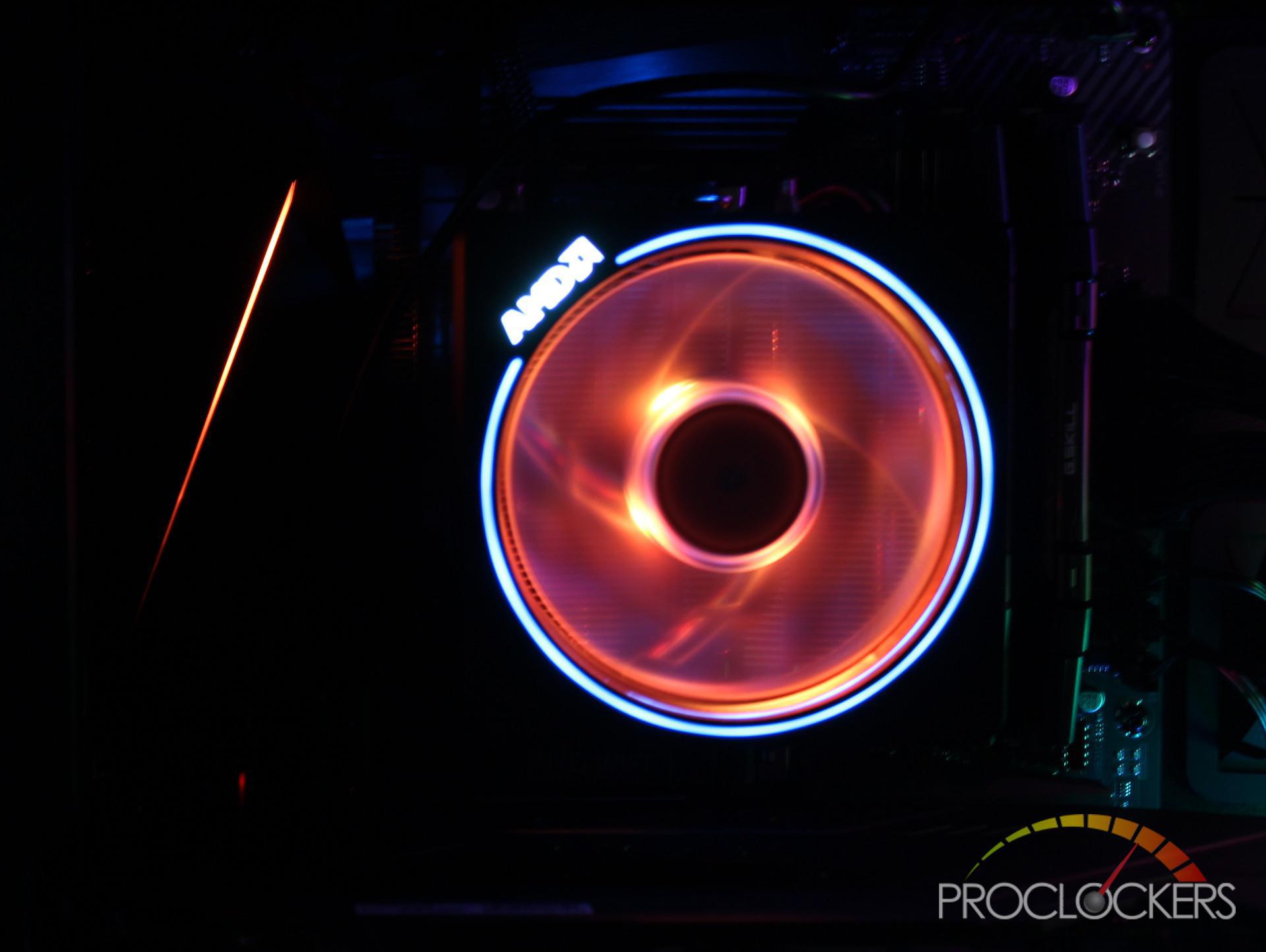 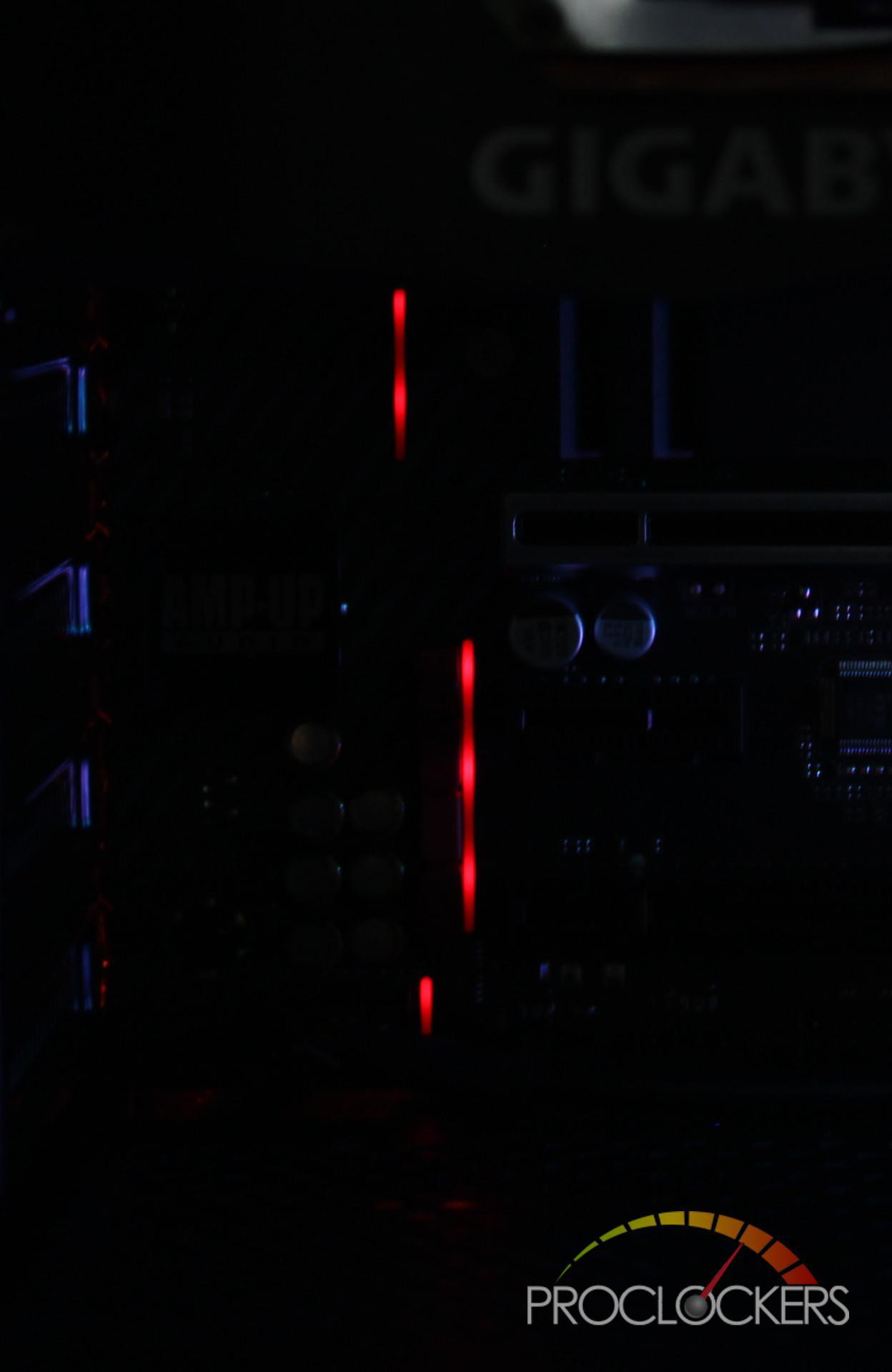