To test the X570 AORUS Pro WIFI we will be running it through various benchmarks that will test every aspect of the board. These tests will include CPU, Memory and gaming benchmarks which will give us a gauge of its overall performance.

The system we will install is a Corsair 220T and will include the following components:

PCMark 10 is the complete benchmark for the modern office. It is the ideal test for organizations that are evaluating PCs for a workforce with a range of performance needs. The tests in this benchmark cover a wide range of activities from everyday productivity tasks to demanding work with digital media content.
PCMark 10 uses a modular approach to build relevant benchmark tests around common end-user scenarios. A Test Group is a collection of workloads that share a common theme or purpose. There are four test groups in PCMark 10, we use three of them.
Essentials: covers the common, everyday ways that people use a PC. The workloads include Web Browsing, Video Conferencing, and App Start-up time.
Productivity: measures system performance with everyday office applications. This test group includes Spreadsheets and Writing workloads.
Digital Content Creation: This test group’s workload reflects the demands of working with digital content and media. The tests include Photo Editing, Video Editing, and Rendering and Visualization. 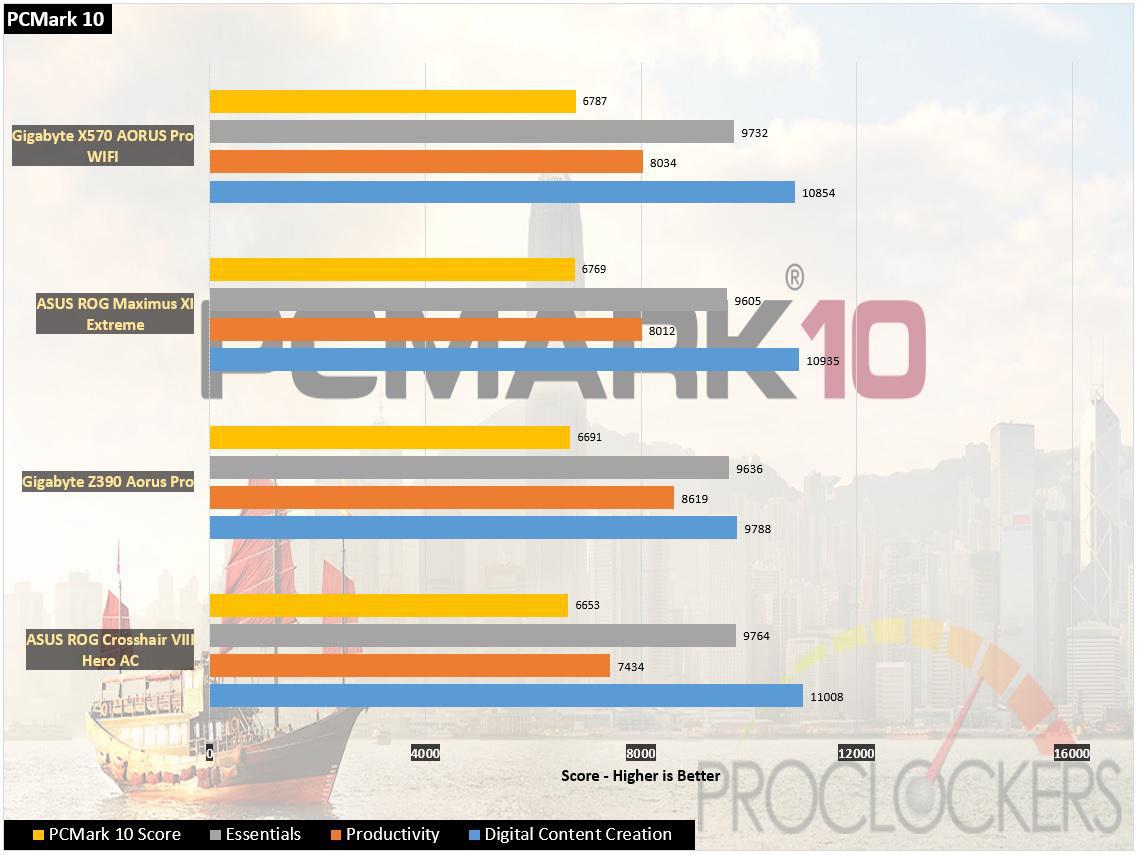 WebXPRT 2013 uses scenarios created to mirror the tasks you do every day to compare the performance of almost any Web-enabled device. It contains four HTML5- and JavaScript-based workloads: Photo Effects, Face Detect, Stocks Dashboard, and Offline Notes.  WebXPRT is run with the latest stable release version of Google Chrome browser, in this case, Version 70. 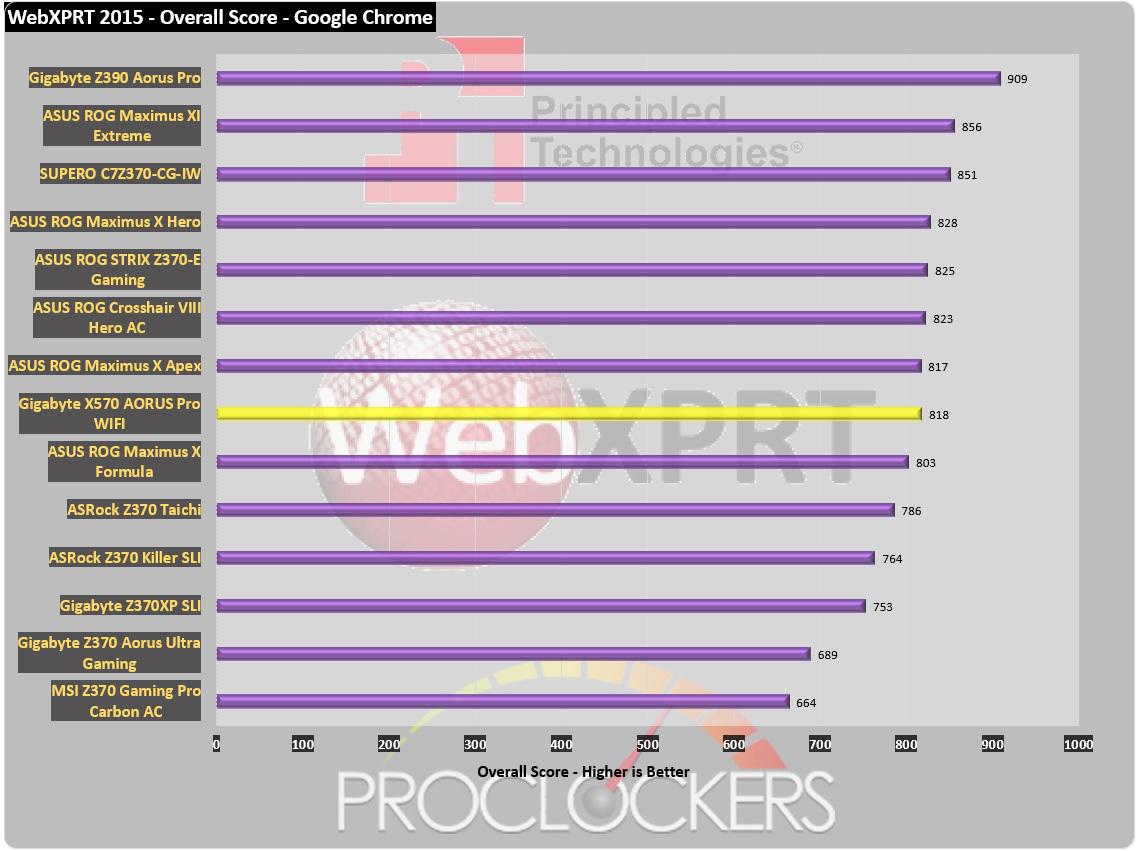 “On August 1995, the calculation of pi up to 4,294,960,000 decimal digits was succeeded by using a supercomputer at the University of Tokyo. The program was written by D.Takahashi in collaboration with Dr.Y.Kanada at the computer center. This record should be the current world record. (Details are shown in the windows help.) This record-breaking program was ported to personal computer environments such as Windows NT and Windows 95. In order to calculate 33.55 million digits, it takes within 3 days with a Pentium 90 MHz, 40 MB main memory and 340 MB available storage.” 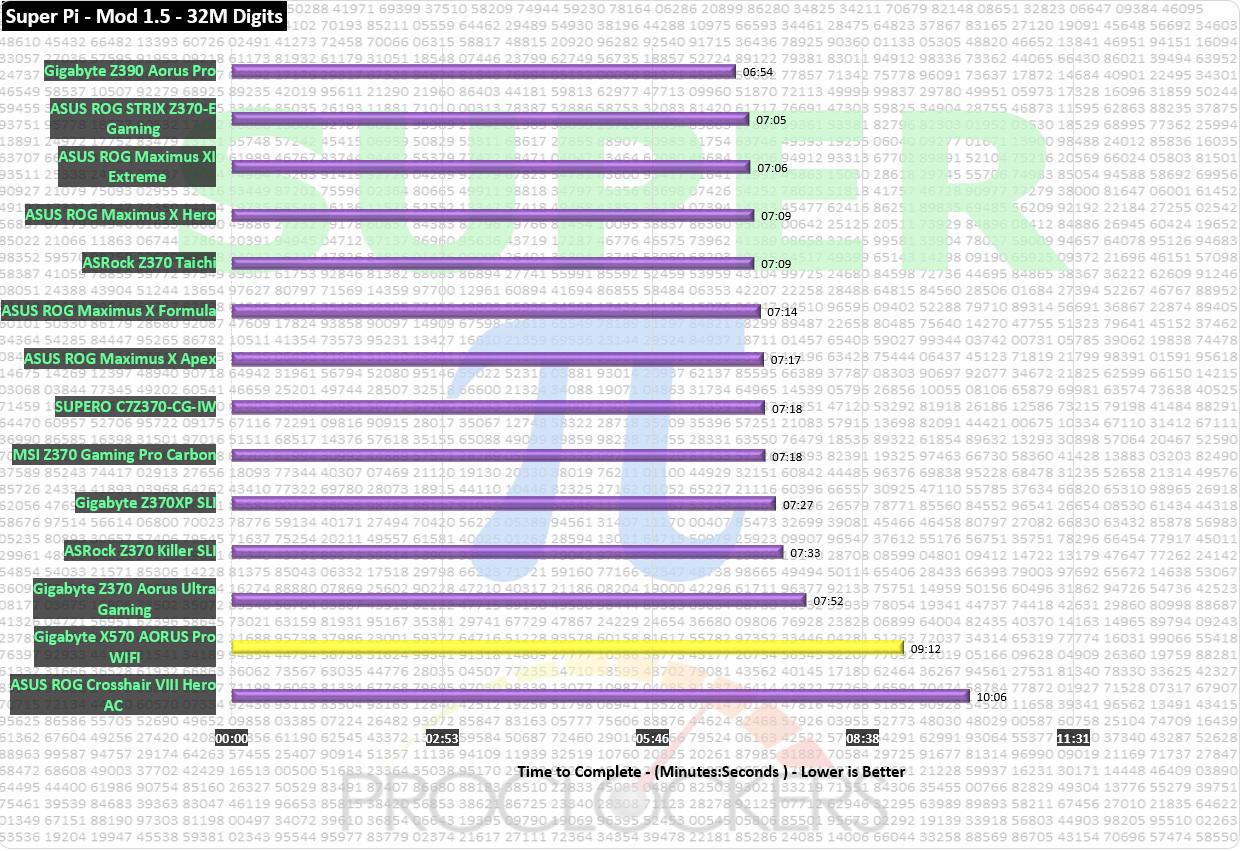 Seems that SuperPI doesn’t play well with AMD Ryzen chips being over 2 minutes behind the Z390 platform. The X570 AORUS Pro WIFI put up a score of 9 minutes and 12 seconds, which did beat our other X570 board by 54 seconds.

“CINEBENCH is a real-world cross-platform test suite that evaluates your computer’s performance capabilities. CINEBENCH is based on MAXON’s award-winning animation software CINEMA 4D, which is used extensively by studios and production houses worldwide for 3D content creation. MAXON software has been used in blockbuster movies such as Iron Man 3, Oblivion, Life of Pi or Prometheus and much more. 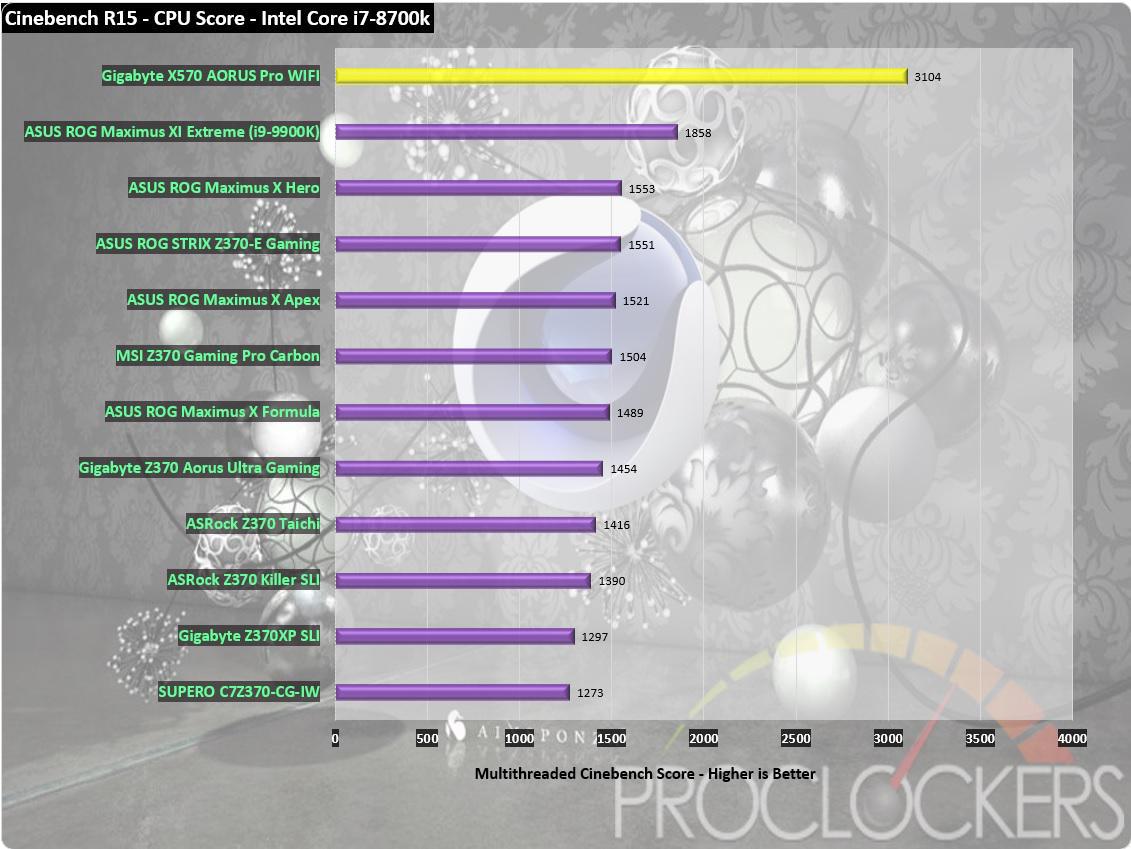 The benchmark shows a rating in MIPS (million instructions per second). The rating value is calculated from the measured speed, and it is normalized with results of Intel Core 2 CPU with multi-threading option switched off. So, if you have modern CPU from Intel or AMD, rating values in single-thread mode must be close to real CPU frequency. There are two tests, compression with LZMA method and decompression with LZMA method. Once the total passes reach 100, the score is taken 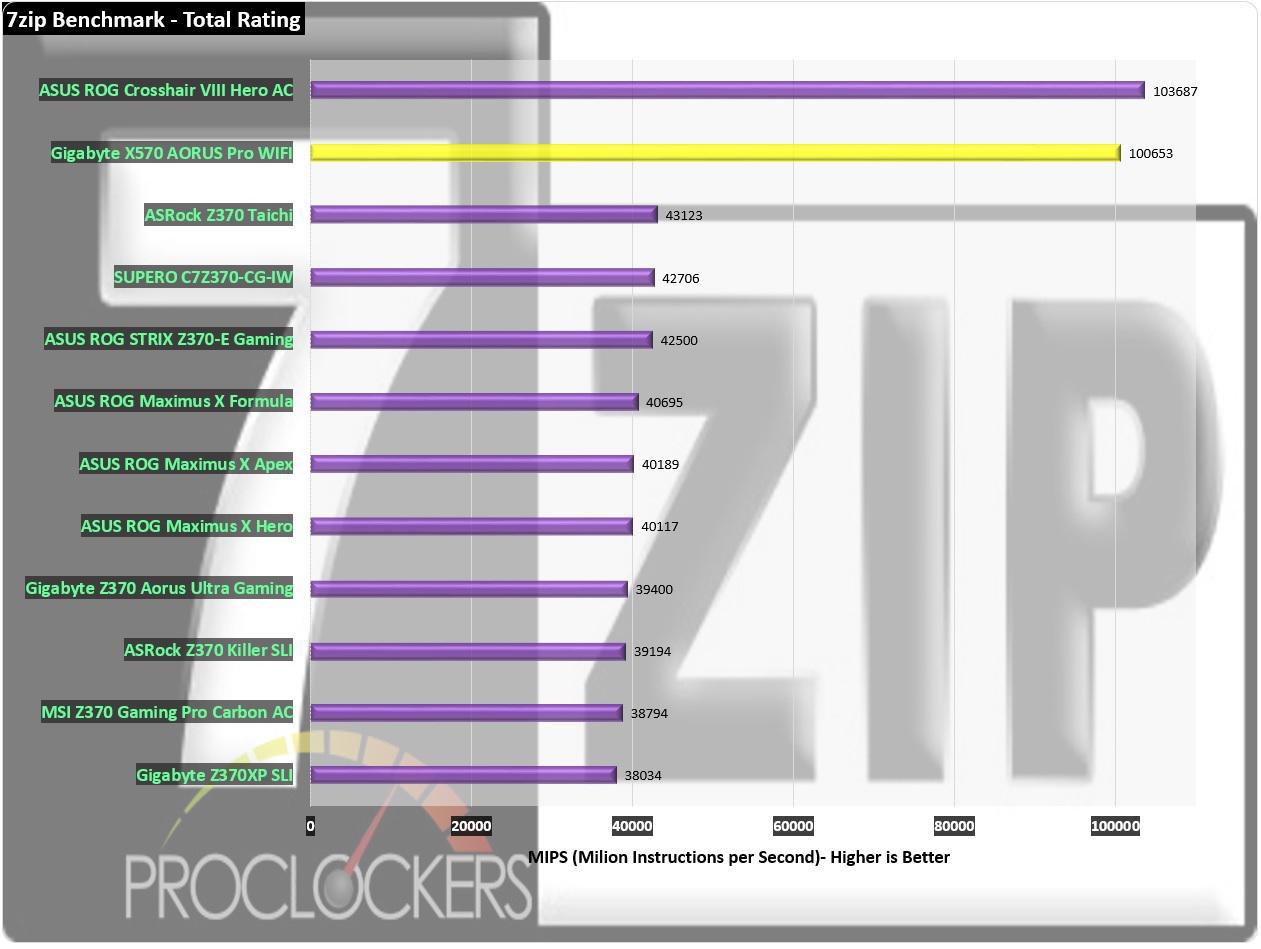 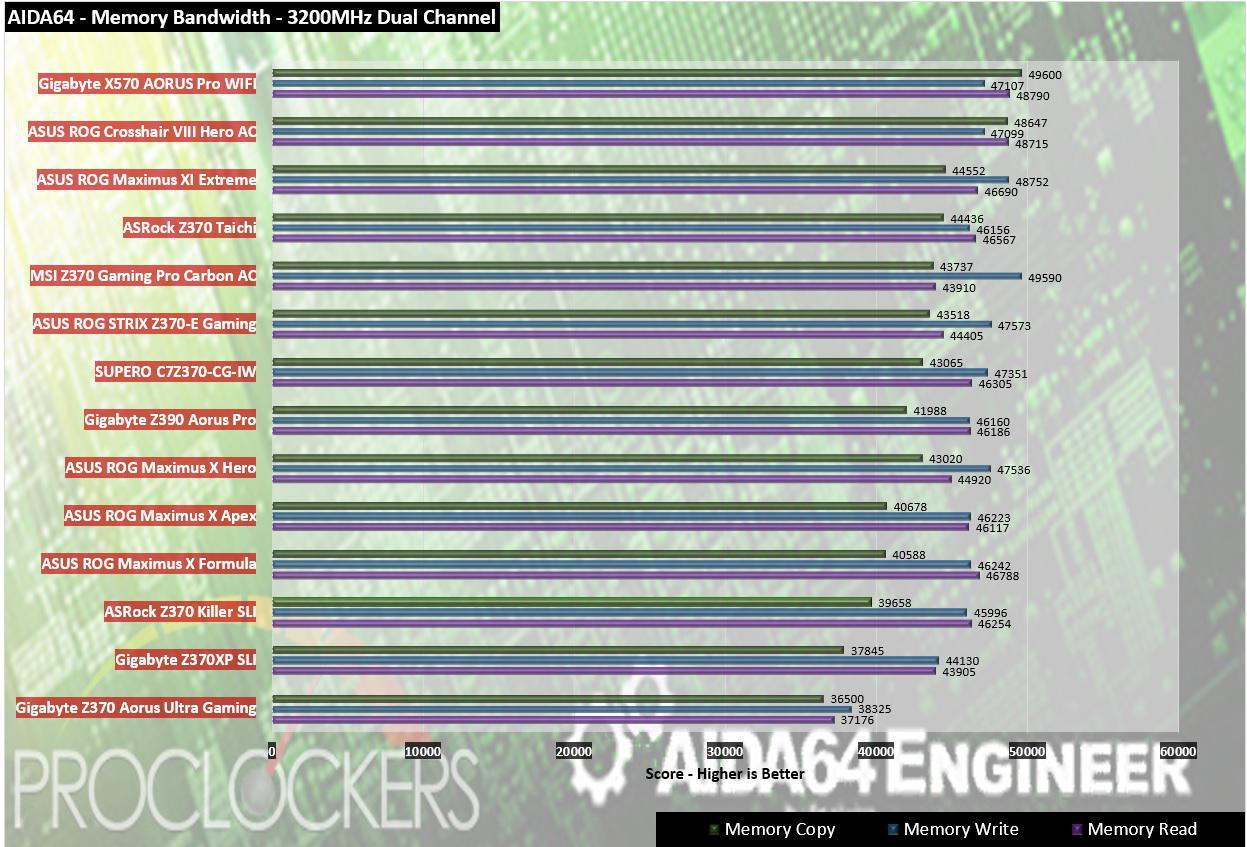 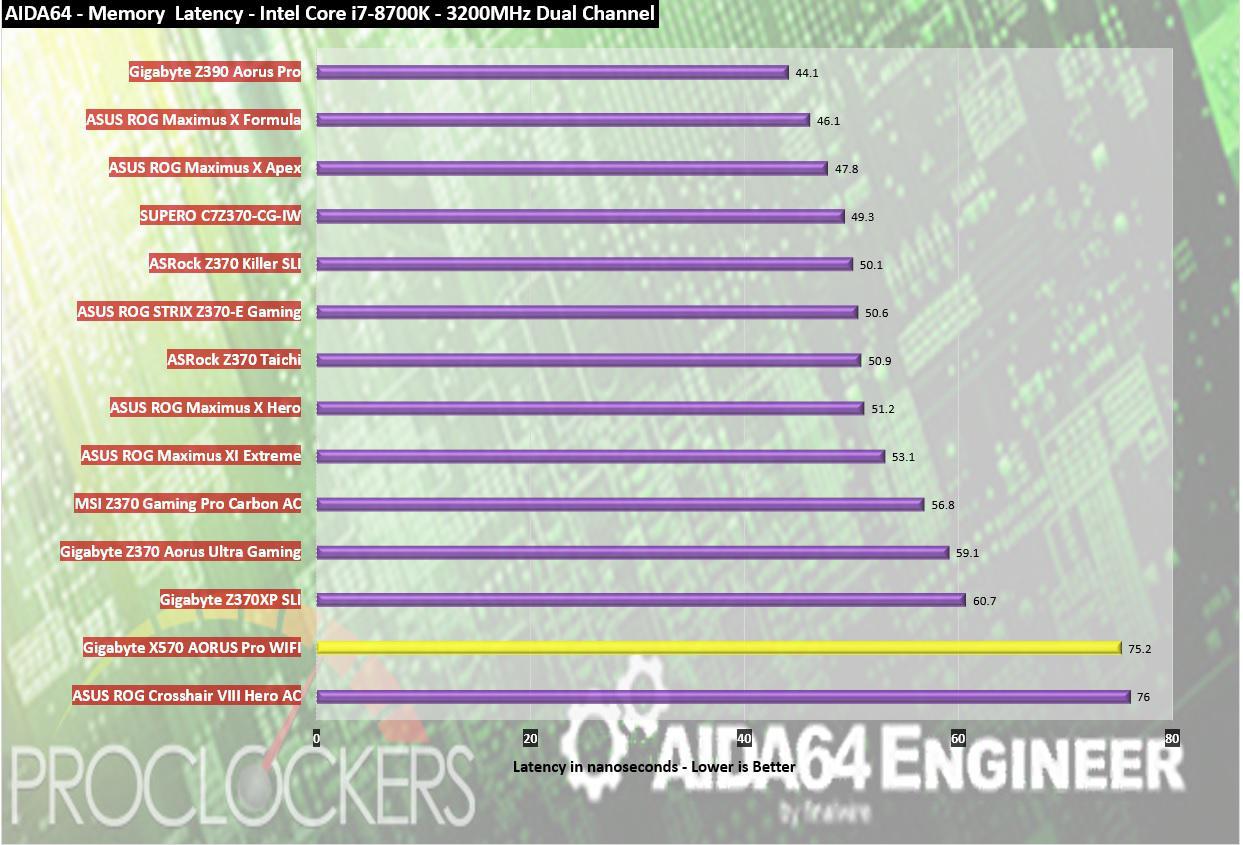 Memory latency is one of Ryzen’s weak spots due to its chiplets, we find the AORUS Pro WIFI well behind its Z390 counterpart at 75.2ns. 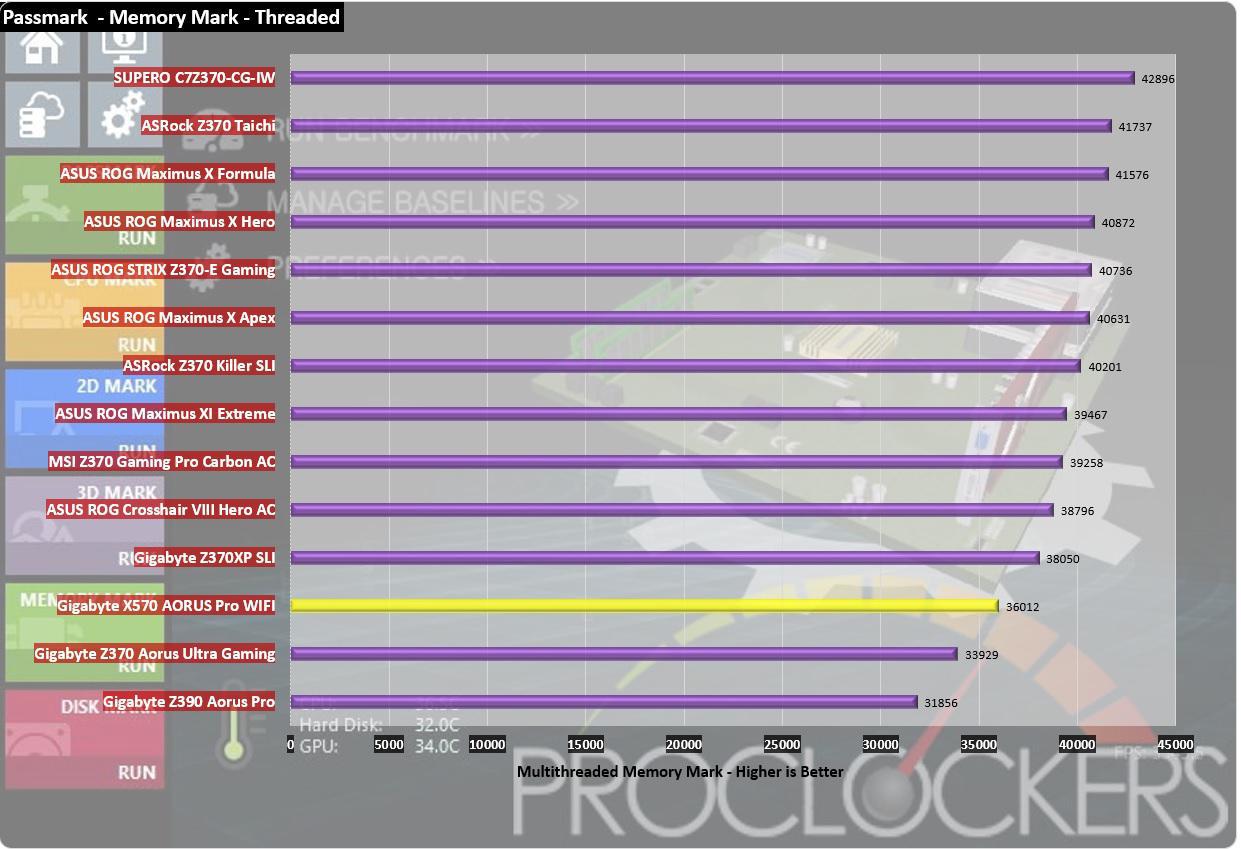 Like other Gigabyte boards, we find the X570 AORUS Pro WIFI struggle in the Passmark memory benchmark. 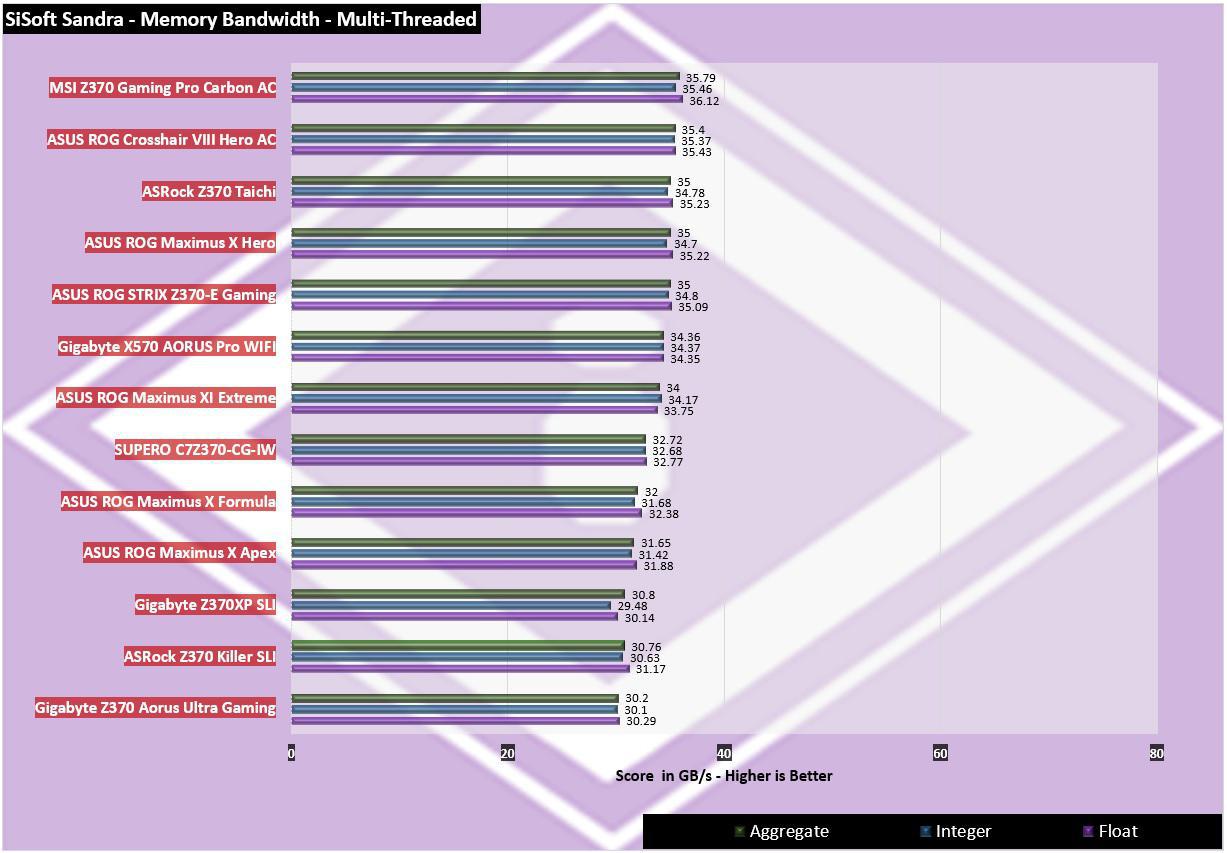 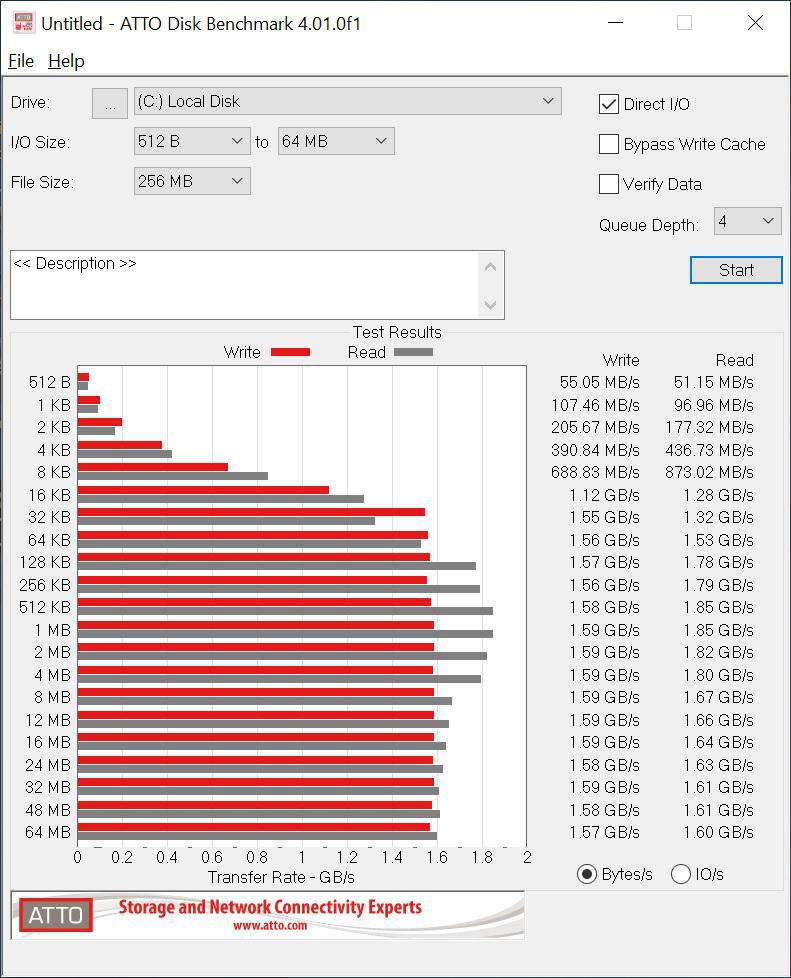 No surprises here as it benches relatively close to Crucial P1’s rated speed of 2000 MB/s read and 1700MB/s write. 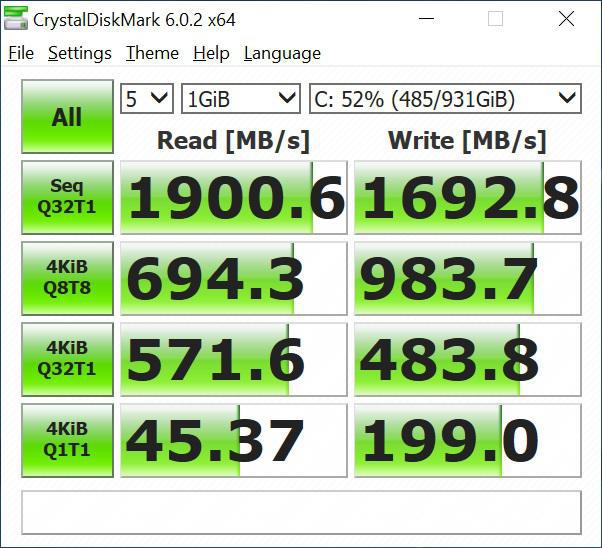 Again in CrystalDiskMark, it’s benching fairly close to the rated speed of the Crucial P1 1000GB.

The synthetic tests determine the sequential and random read and write performance of the SSD. These tests are performed without using the operating system cache. In the Seq test, the program measures how long it takes to read and write a 1 GB file. In the 4K test, read and write performance is determined for randomly selected 4K blocks. The 4K-64 Third test is equivalent to the 4K procedure, except that the read and write operations are distributed to 64 threads. This test should show differences between the IDE operating mode where NCQ is not supported and the AHCI mode for SSDs with Native Command Queuing (NCQ). The additional compression test can measure the performance of the SSD as a function of the compressibility of the data. This is especially important for the controllers that are used to increase the performance and life of the cell compression. 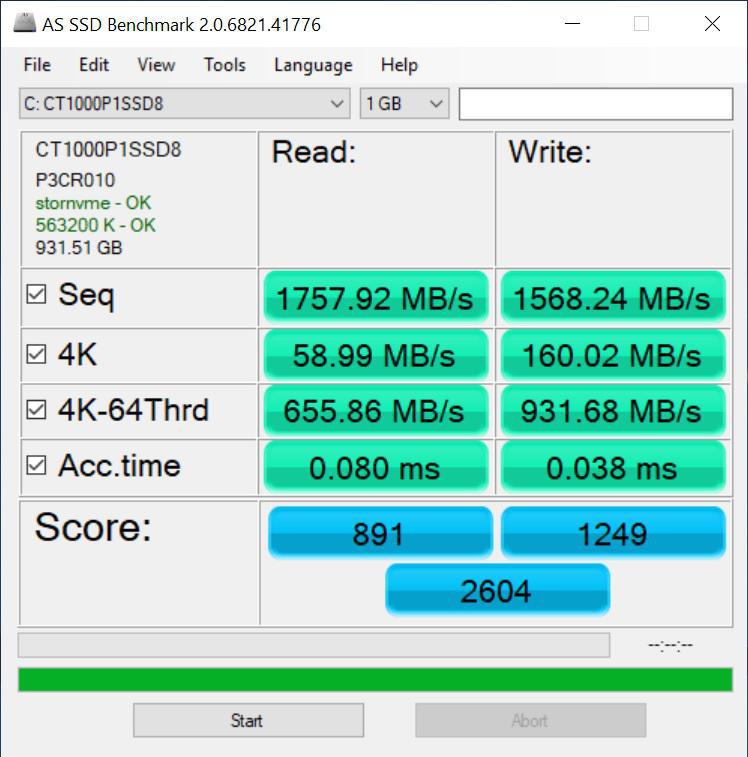 AS SSD is known to score lower than most other benchmarks, and the X570 AORUS Pro WIFI benchmarks pretty much right where I would expect it to be. 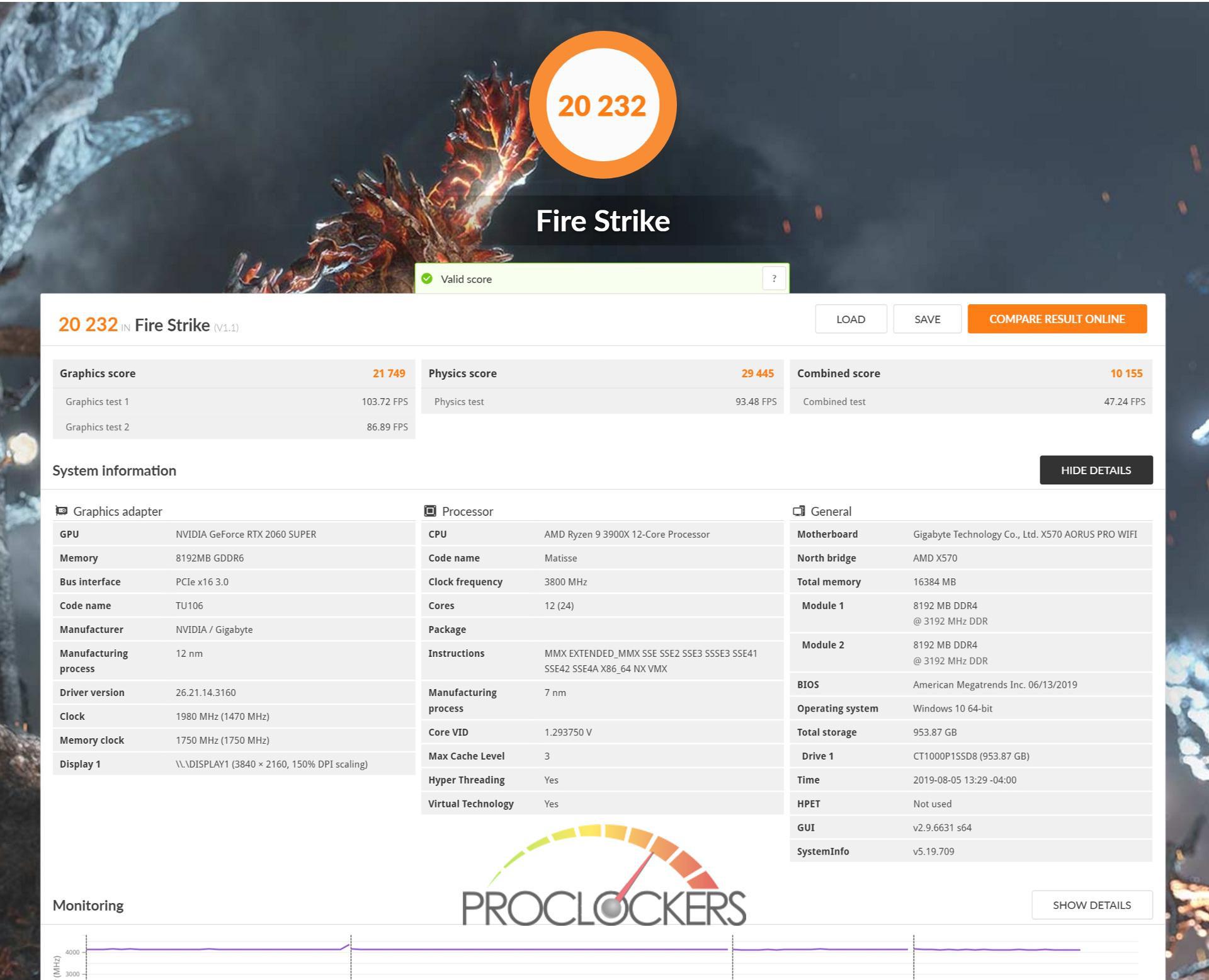 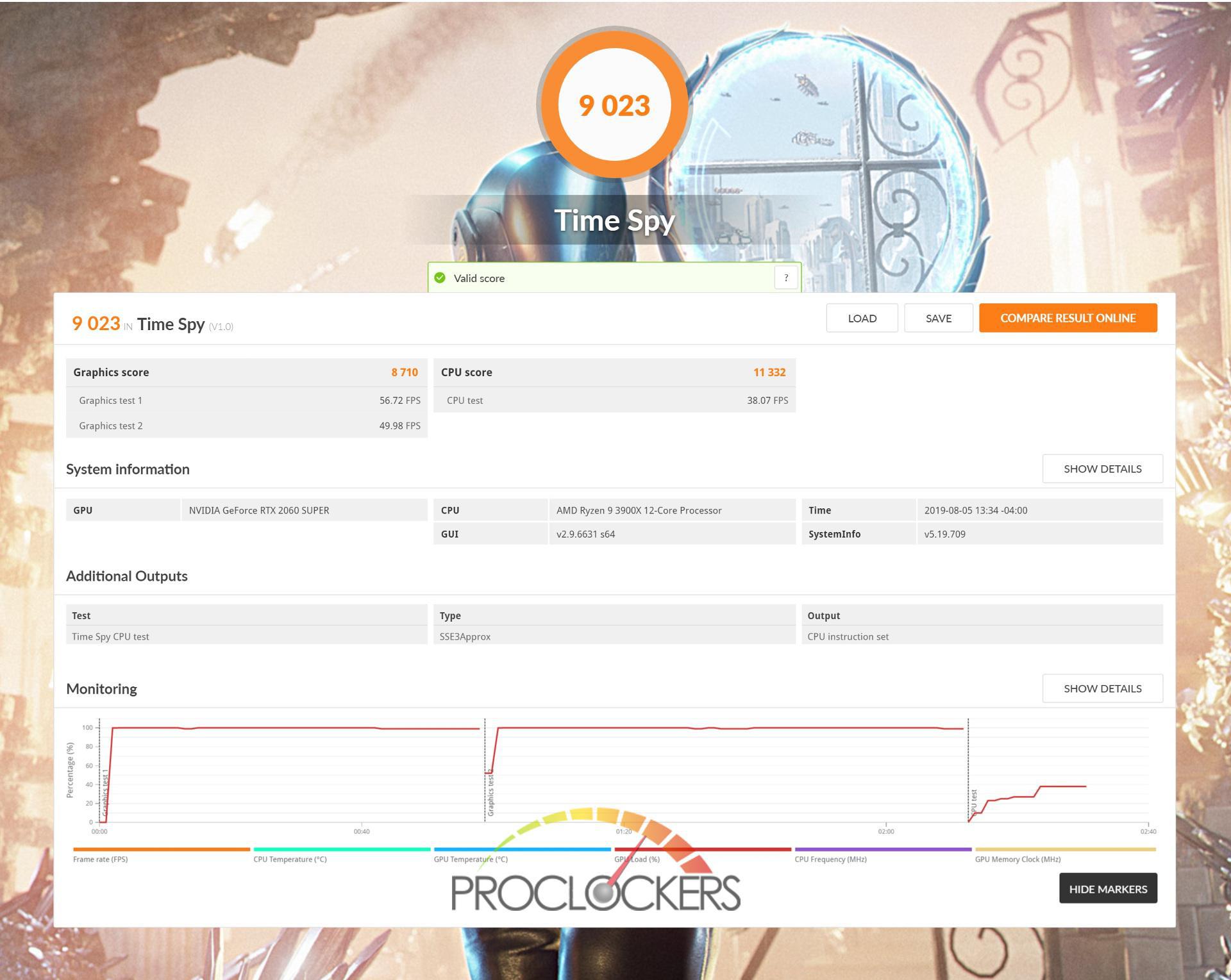 Timespy scores an impressive 9023, which pretty much matches our RTX 2060 Super runs on the Z390 platform. 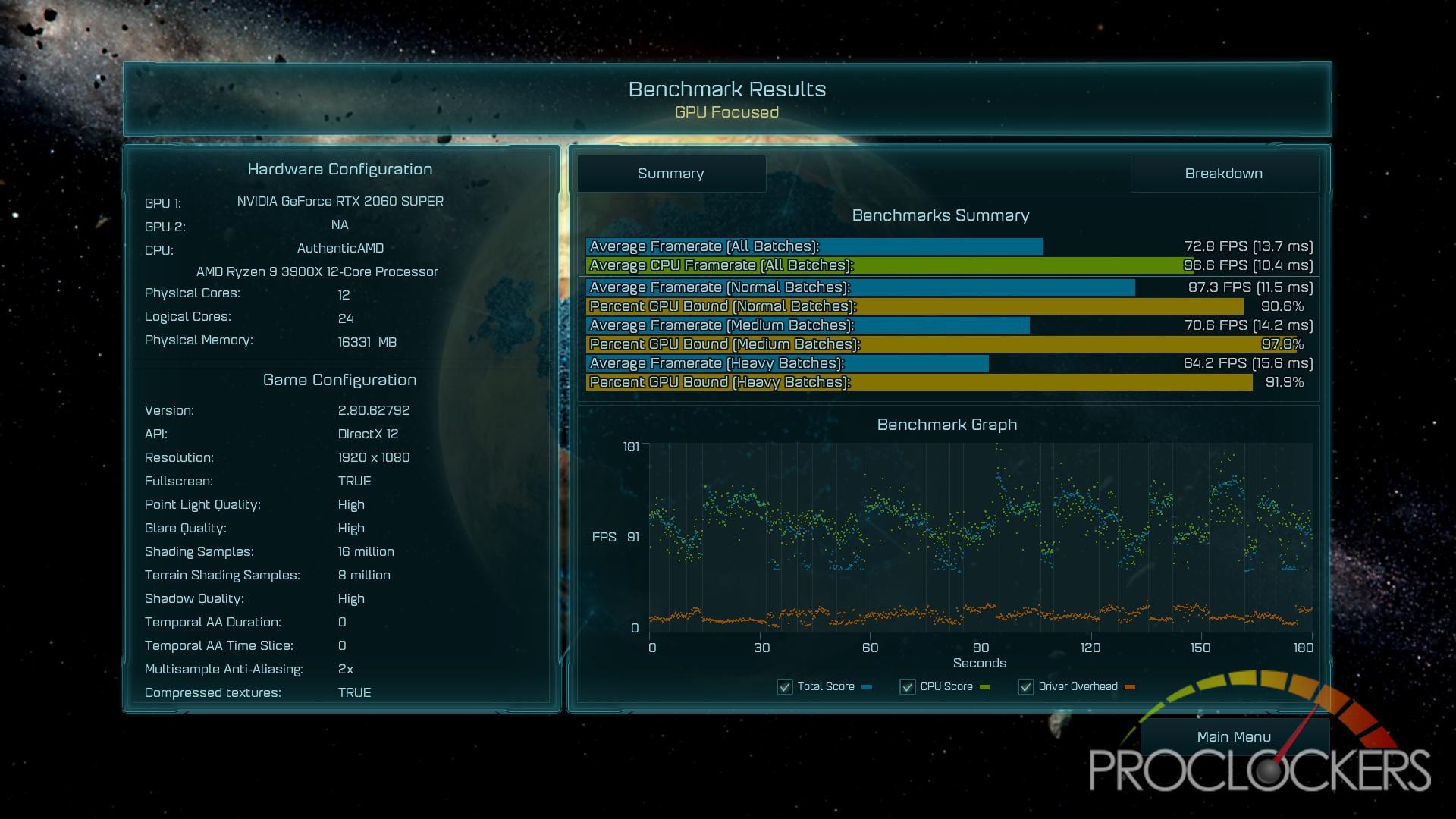 Running Ashes of the Singularity at 1080p with the “Extreme” preset we are just under 5 FPS below our Z390 9900K run with the same card. 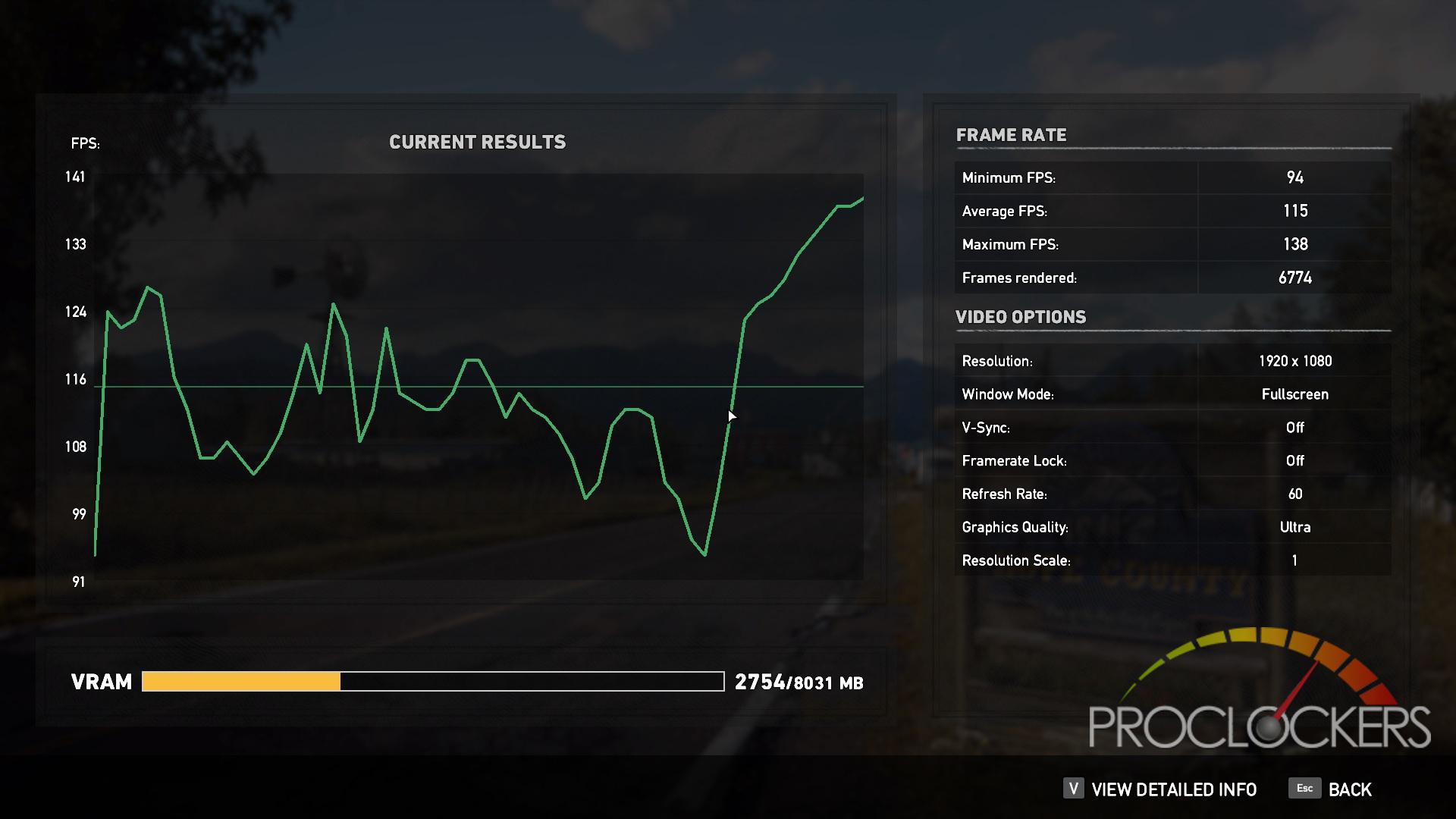 Like in Ashes of the Singularity we also see Far Cry’s frame drop a little averaging 115 FPS as opposed to 124 on our 9900K.

Shadow of the Tomb Raider

Experience Lara Croft’s defining moment as she becomes the Tomb Raider. In Shadow of the Tomb Raider, Lara must master a deadly jungle, overcome terrifying tombs, and persevere through her darkest hour. As she races to save the world from a Maya apocalypse, Lara will ultimately be forged into the Tomb Raider she is destined to be. 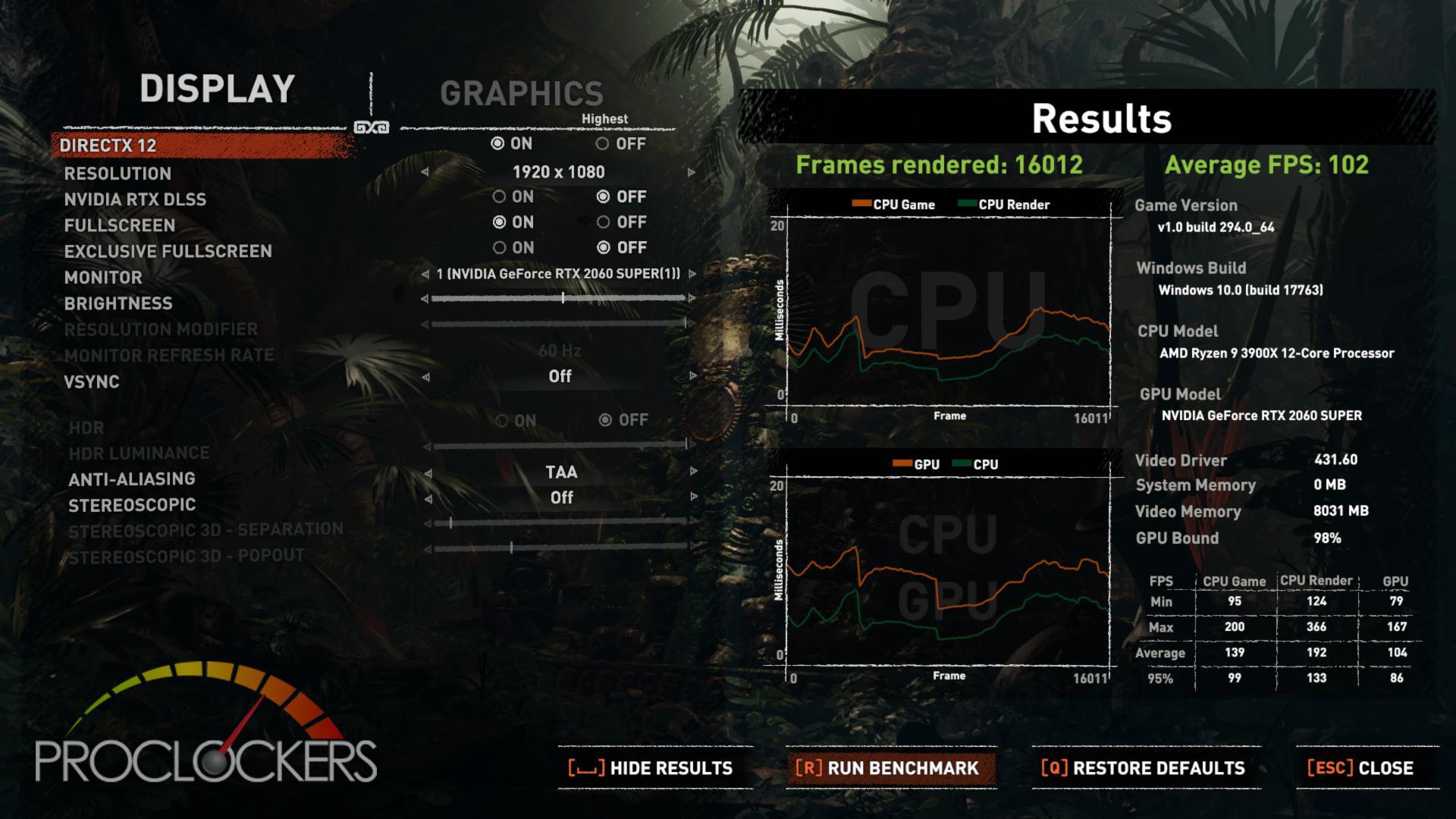