All performance testing was done with the i7-8700K and GTX 1070 at default clock speed. CPU was left with Speed Step and Turbo Boost enabled. Games where ran at a resolution of 1920 x 1080 and higher settings enabled as noted.

PCMark 10 is the complete benchmark for the modern office. It is the ideal test for organizations that are evaluating PCs for a workforce with a range of performance needs. The tests in this benchmark cover a wide range of activities from everyday productivity tasks to demanding work with digital media content.

PCMark 10 uses a modular approach to build relevant benchmark tests around common end-user scenarios. A Test Group is a collection of workloads that share a common theme or purpose. There are four test groups in PCMark 10, we use three of them.

Essentials: covers the common, everyday ways that people use a PC. The workloads include Web Browsing, Video Conferencing, and App Start-up time.

Digital Content Creation: This test group’s workload reflects the demands of working with digital content and media. The tests include Photo Editing, Video Editing, and Rendering and Visualization. 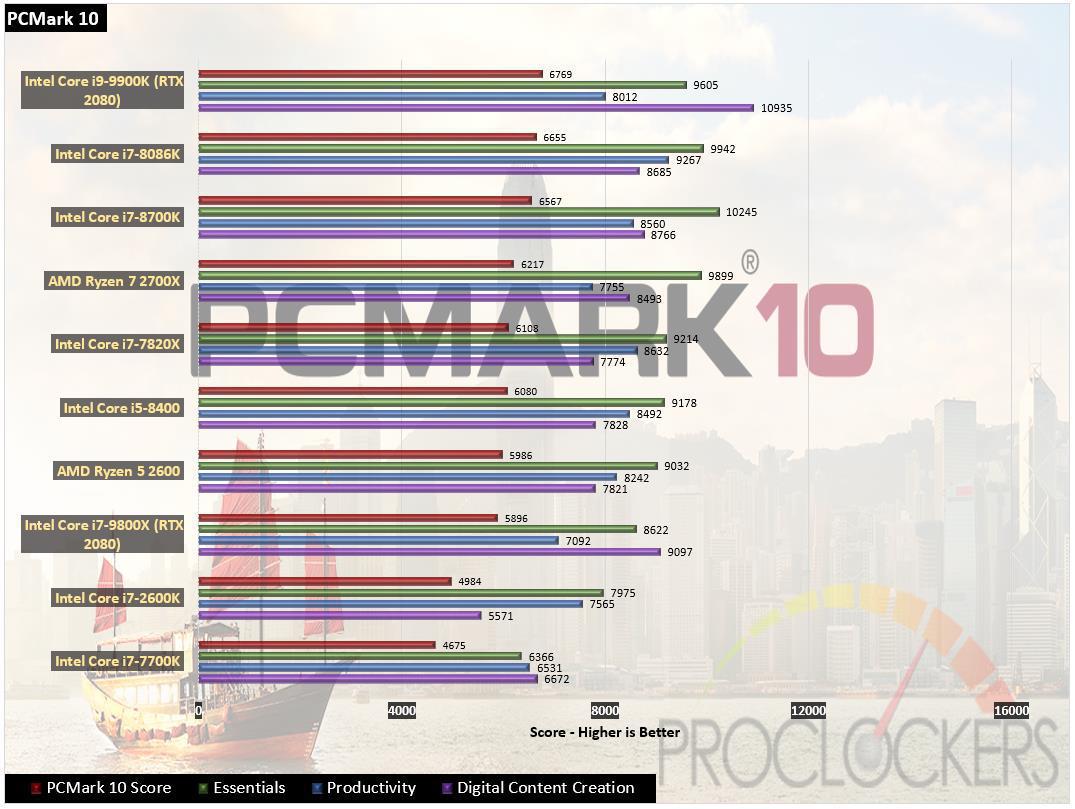 The comparatively lower clock speeds put the i7-9800X a little bit behind the mainstream-oriented i9-9900K, but that IS an i9 after all. 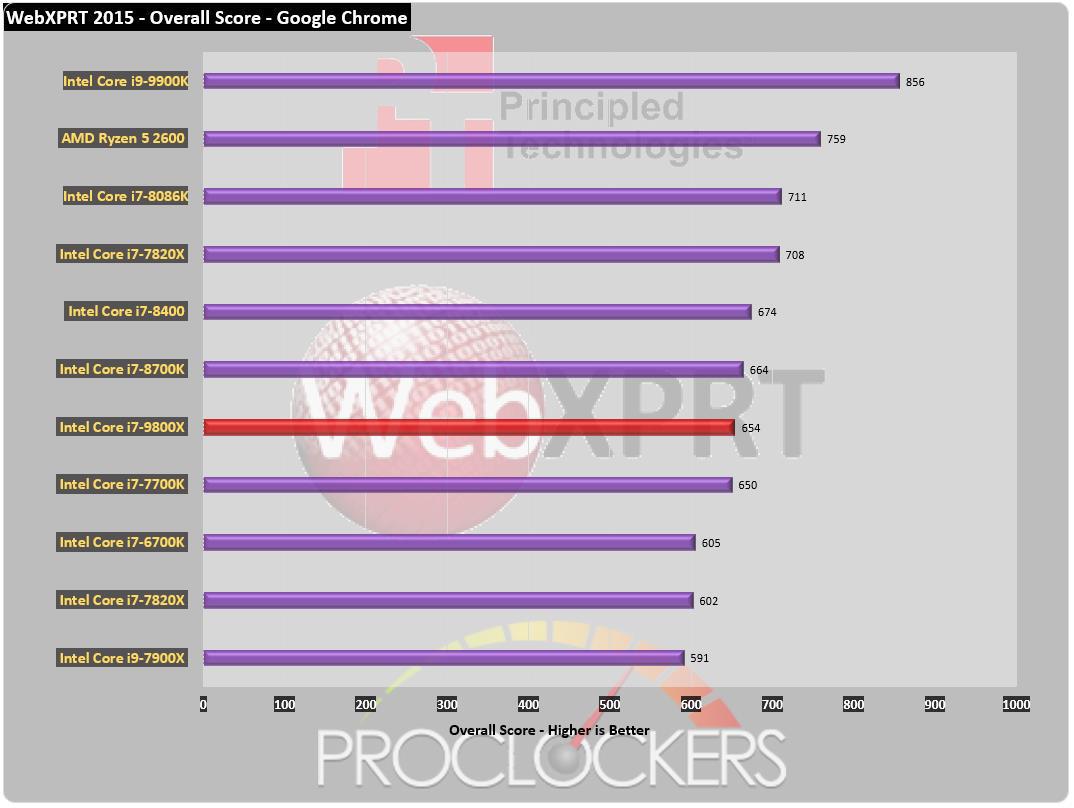 Performance here comes in ahead of all of our other SkyLake based CPUs with the exception of the i7-7820X which beats the 9800X by a decent amount. 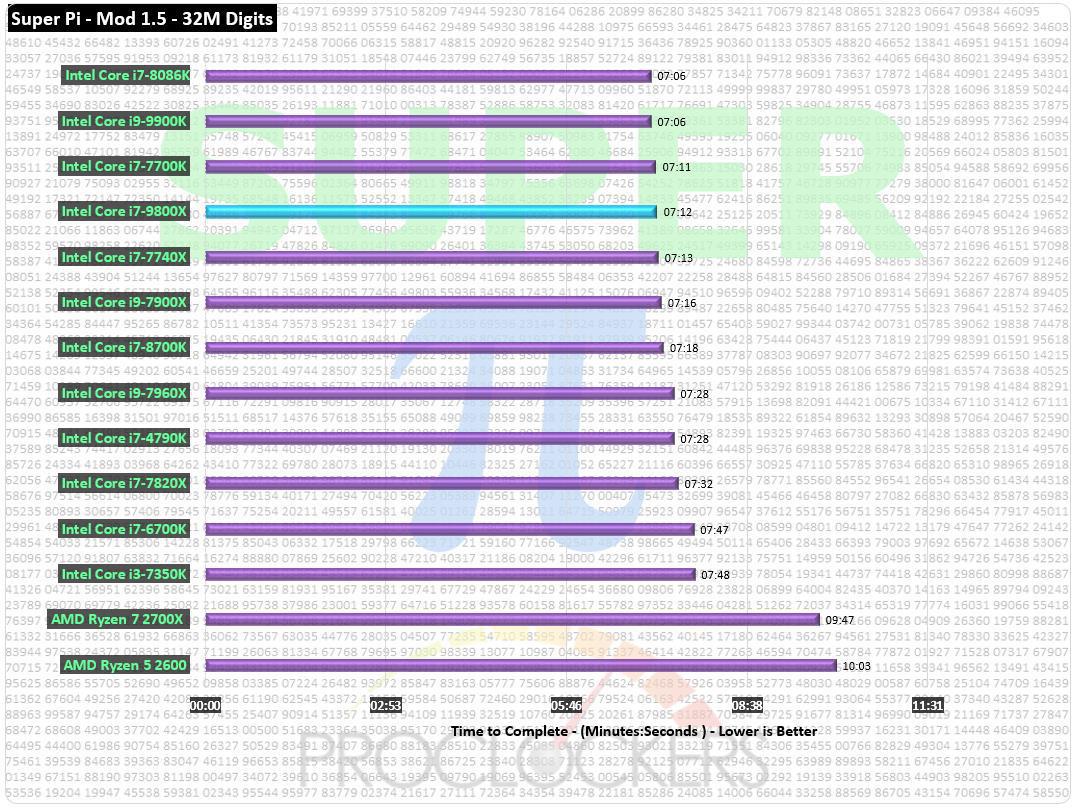 The abilities of Turbo Boost 3.0 here are quite apparent, the i7-9800X just flies with only one thread in use and scores just over 7 minutes and 12 seconds, one of our best times. 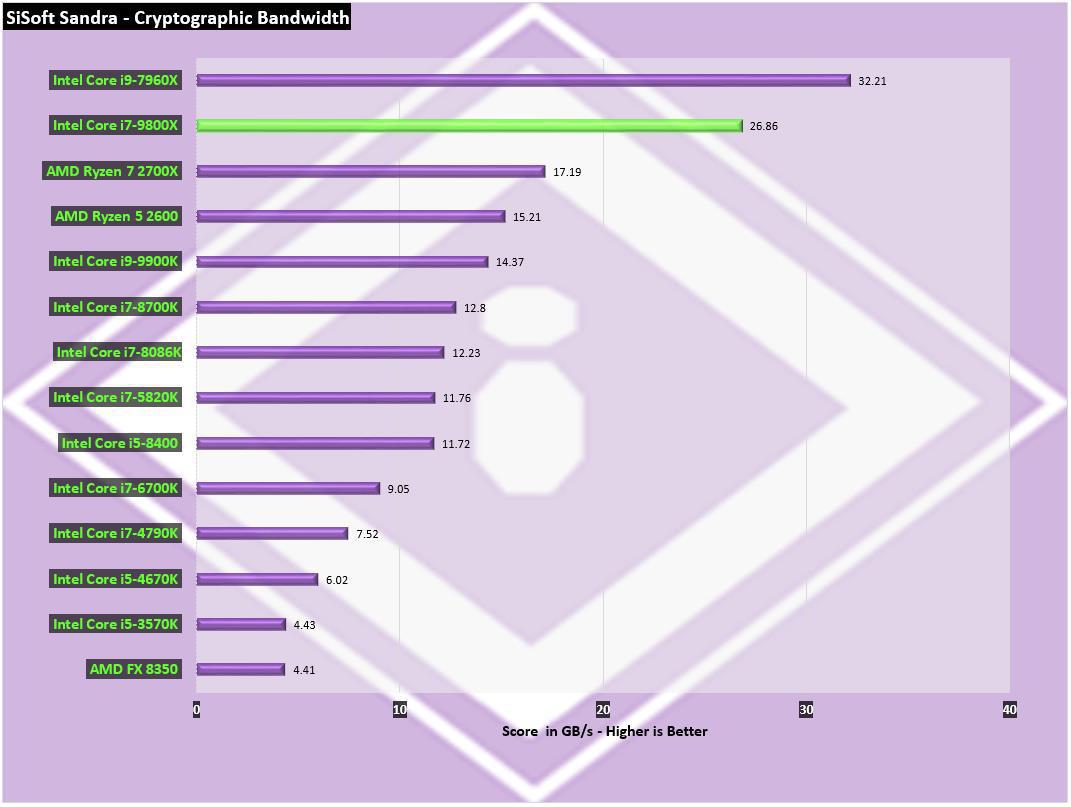 Interestingly, the i7-9800X does really great in this test, only falling to raw core count under the i9-7960X, 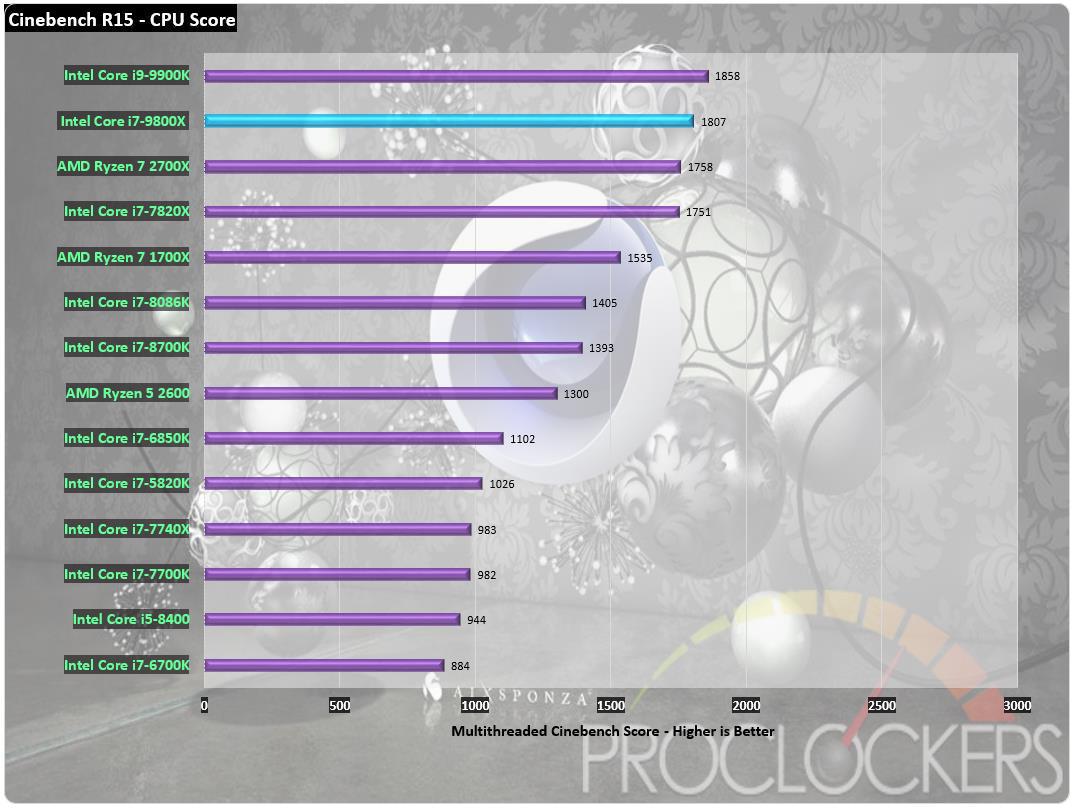 With all cores in play, the i7-9800X does great here, narrowly missing first place for our 8-core chips.

Written by Alexander J. Lee “From a high-school project that went a little too far…” y-cruncher, (y for gamma) is a number-crunching program that can compute various mathematical constants.

It was originally a small program specialized for computing the Euler-Mascheroni Constant. (Which uses gamma as its symbol, hence the name). It has since gained the ability to compute other constants.

It is the first of its kind that is multi-threaded and scalable to multi-core systems. Ever since its launch in 2009, it has become a common benchmarking and stress-testing application for overclockers and hardware enthusiasts.

We tested using the built-in benchmarks to compute Pi to 1 Billion Digits in both single and multi-threaded mode and recorded the Total Computation time at the end of the run. Y-Cruncher is also able to take advantage of AVX512 instructions in compatible CPU’s. Due to the thermal load of running Intense AVX workloads, Intel has implemented and AVX offset clock that may scale the CPU’s clock speed back, even below stock speeds when running intense AVX loads. For this reason, we note the CPU’s clock speed in both single and multi-threaded test modes. 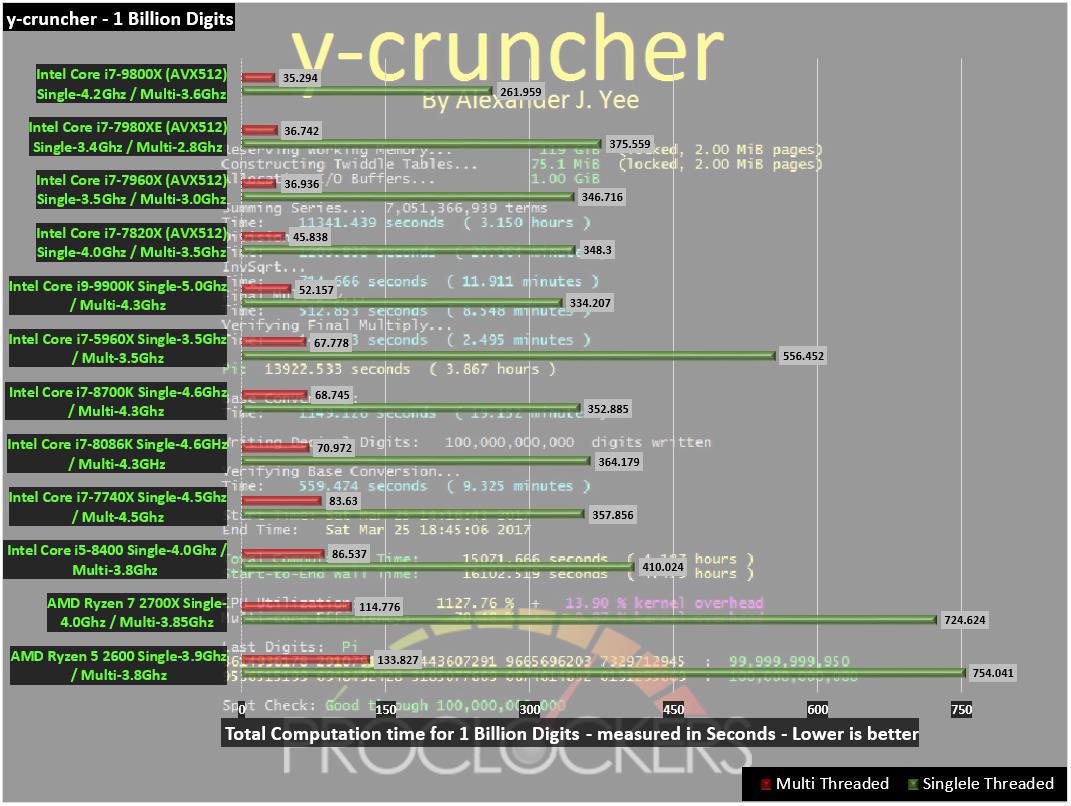 The ability of all Skylake-X chips to take advantage of AVX512 instructions and coupled with a respectable clock speed, the i7-9800X solves for 1 Billion digits of pie the fastest of all of our chips here in both single and multi-threaded modes.

The benchmark shows a rating in MIPS (million instructions per second). The rating value is calculated from the measured speed, and it is normalized with results of Intel Core 2 CPU with multi-threading option switched off. So if you have modern CPU from Intel or AMD, rating values in single-thread mode must be close to real CPU frequency. There are two tests, compression with LZMA method and decompression with LZMA method. Once the total passes reach 100, the score is taken 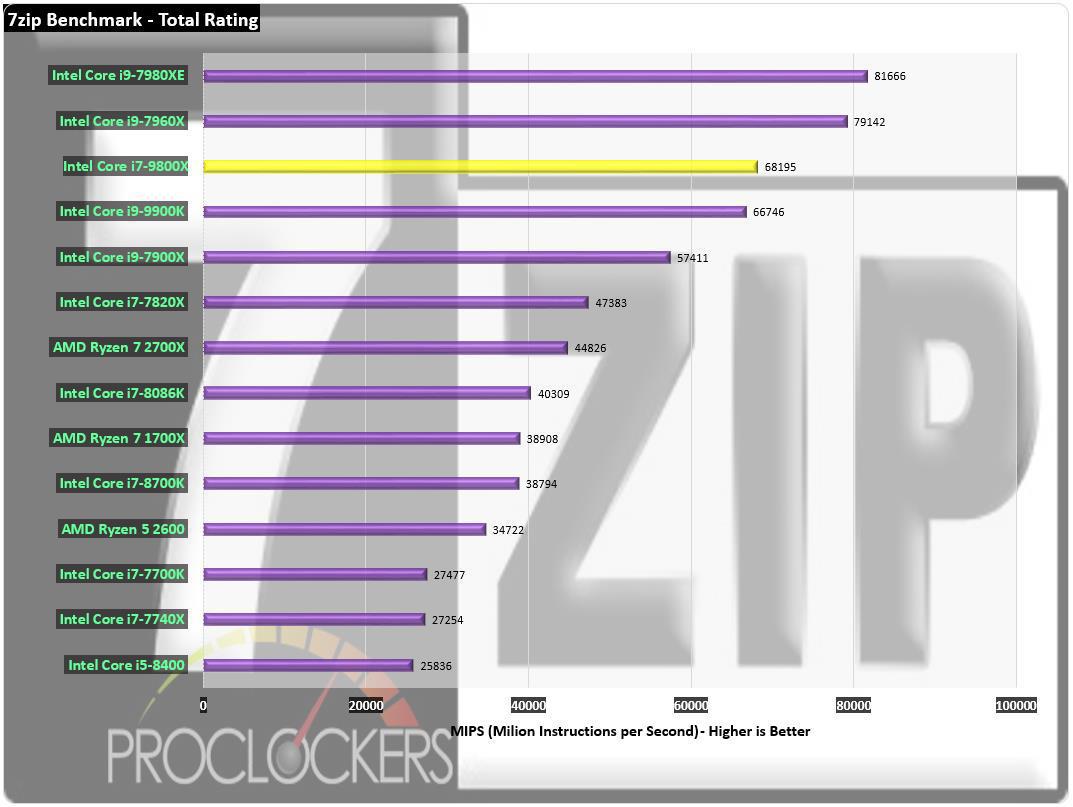 We see a very significant jump over older 8 and even 10-core CPU’s and quad-channel memory even gives the 9800X an edge over the mainstream 9900K.

Let the beast run and benchmark your system in three different tests (Multithreaded, Single-threaded & 4-Threaded) that will test your CPU to the very limit, and score you among hundreds of other systems that have tested.

Multithreaded will test your CPU’s efficiency of running more than one thread without major system lag. The higher you score on this one, the more threads your CPU can handle with a comfortable speed. High multithreaded scores generally mean you can render things faster.

4-Threaded tests your CPU’s performance in games since most games currently run on 4 threads.

Single-threaded evaluates how fast the CPU can handle a single, dedicated thread for processing. 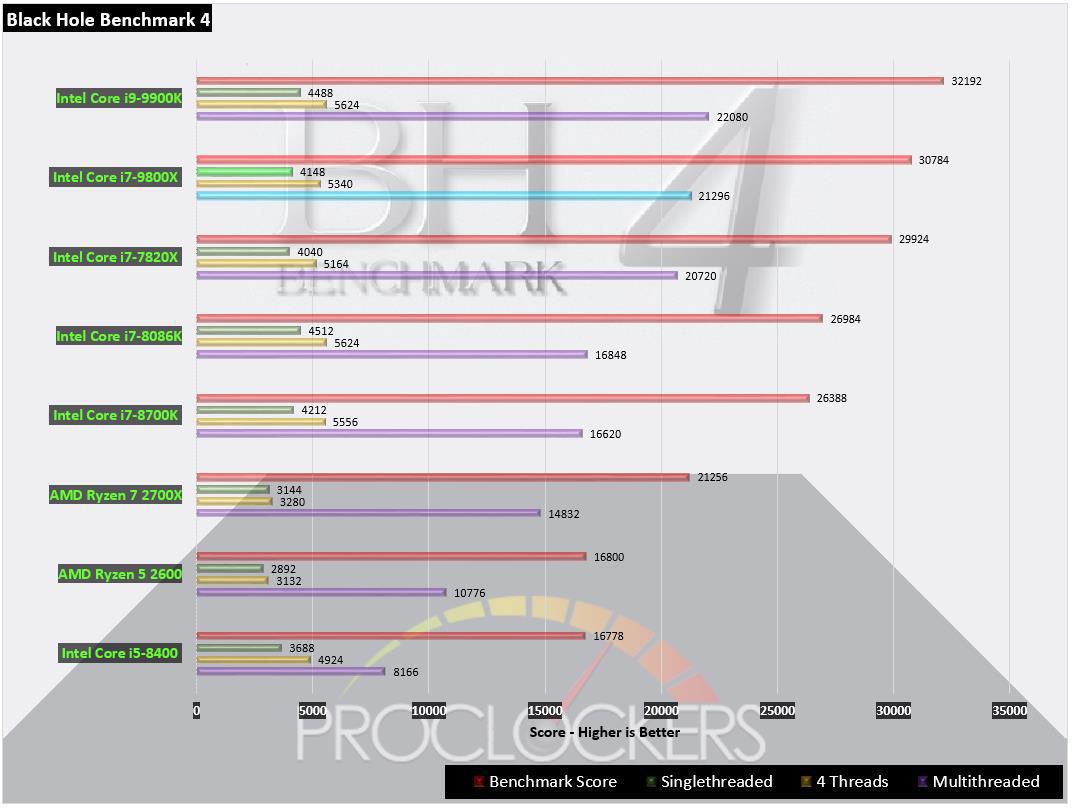 With everything equal here, the 9900K manages to just barely hold an edge over the 9800X thanks to its faster stock clock speeds. 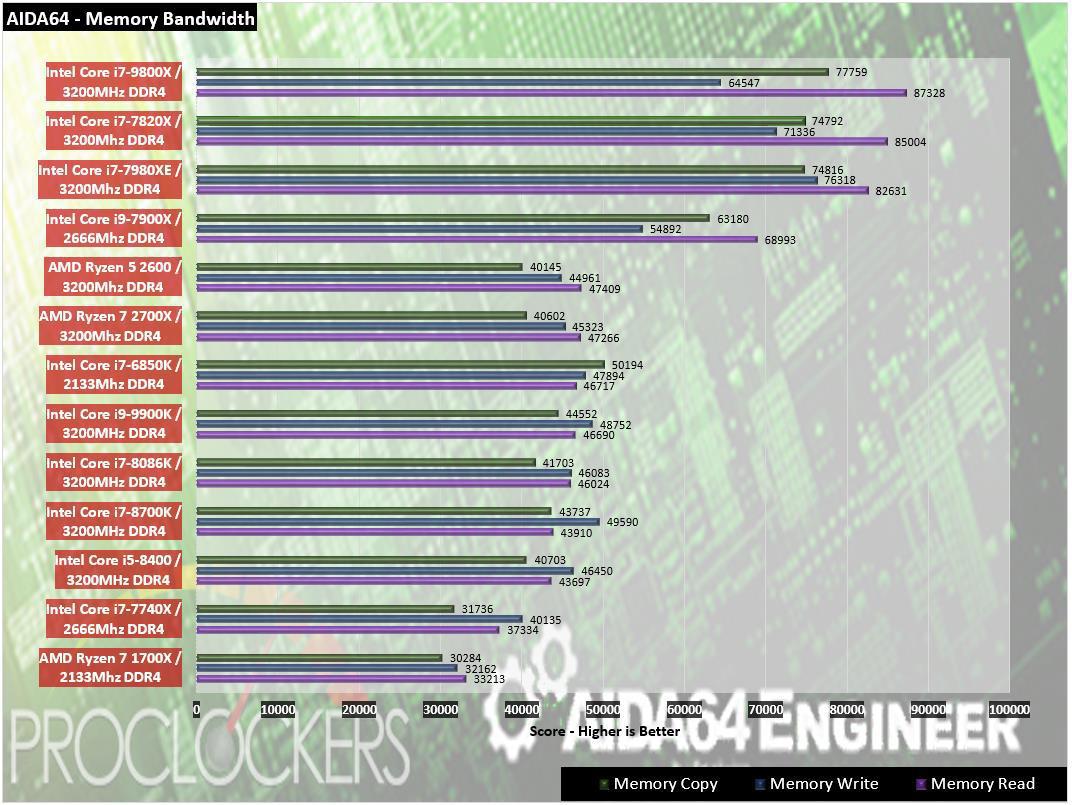 The i7-9800X manages over 87GB/s on reads with a bit underwhelming 64.5GB/s on writes but recovers on copy functions to a little under 78GB/s. 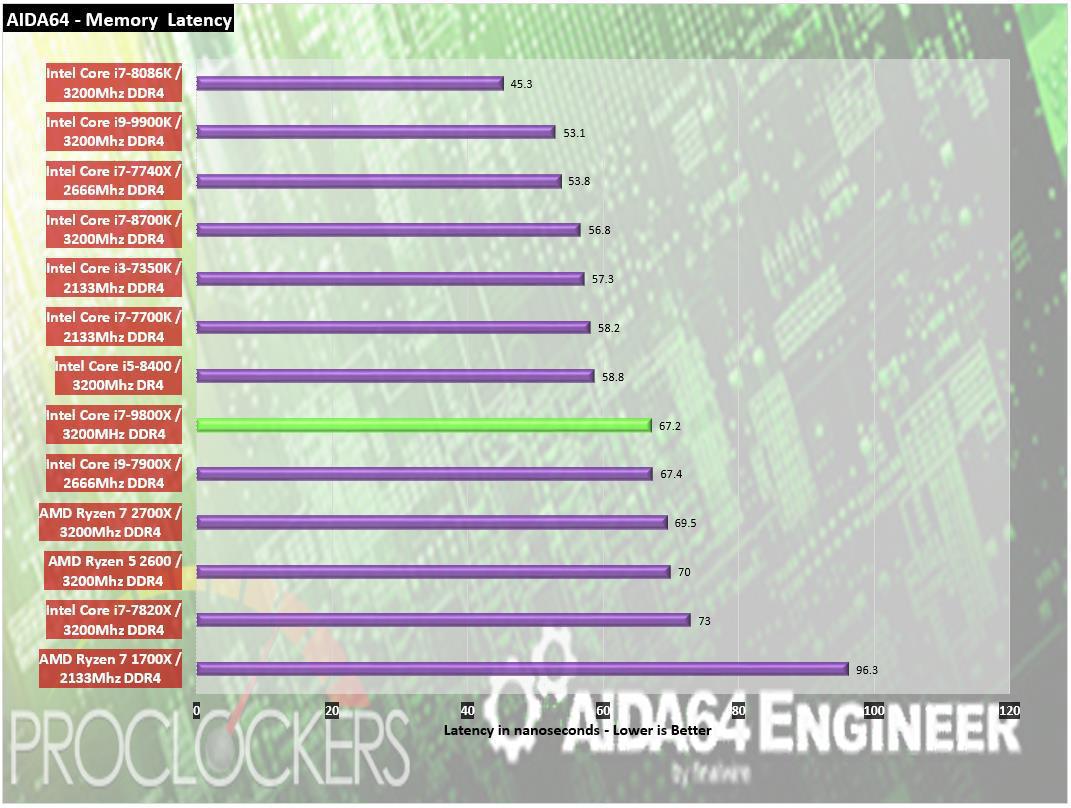 The 9800X is our lowest latency Skylake-X CPU tested so far with a latency of 67.2ns 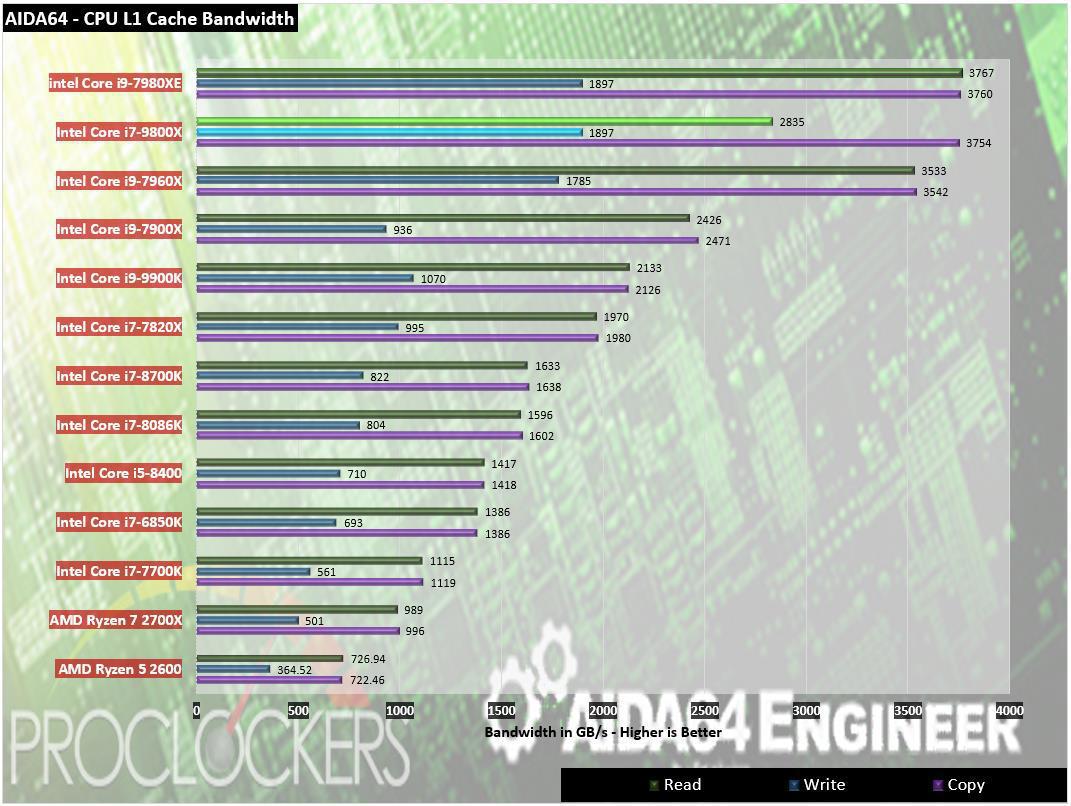 No matter which category you sort by, the i7-9800X does well with significant L1 cache bandwidth. 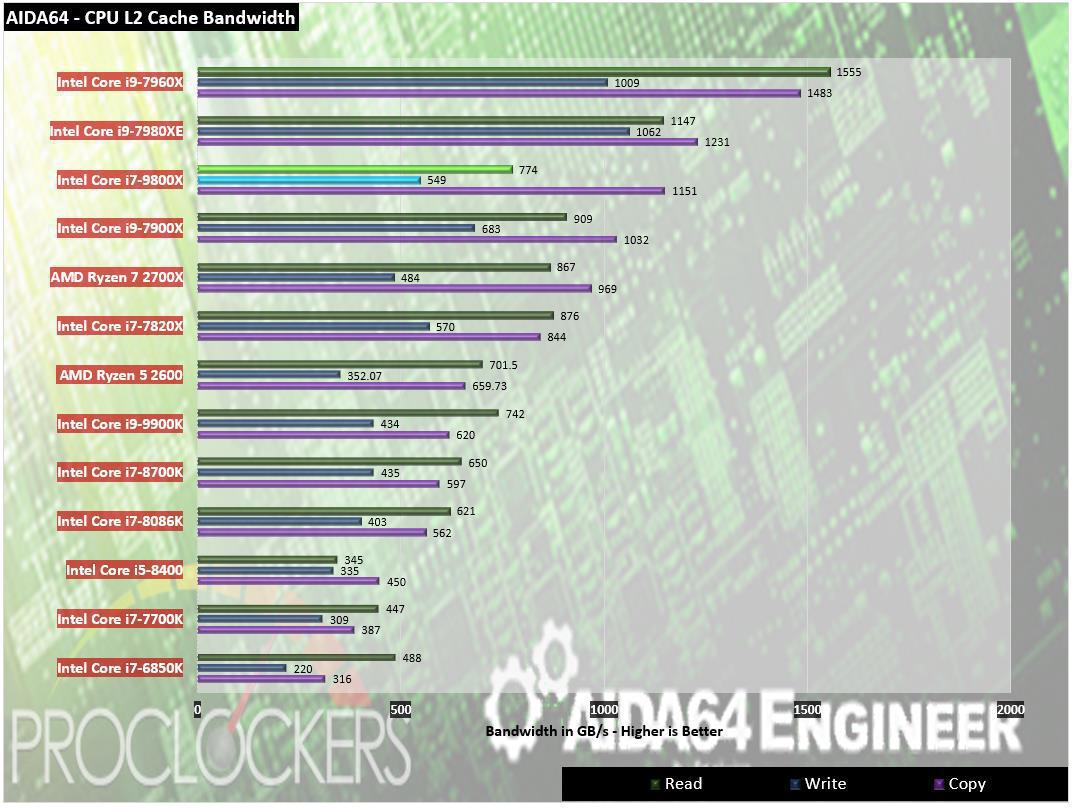 The 9800X has a little higher copy bandwidth for the L2 cache than the outgoing 7820X but read and writes are reasonably close. 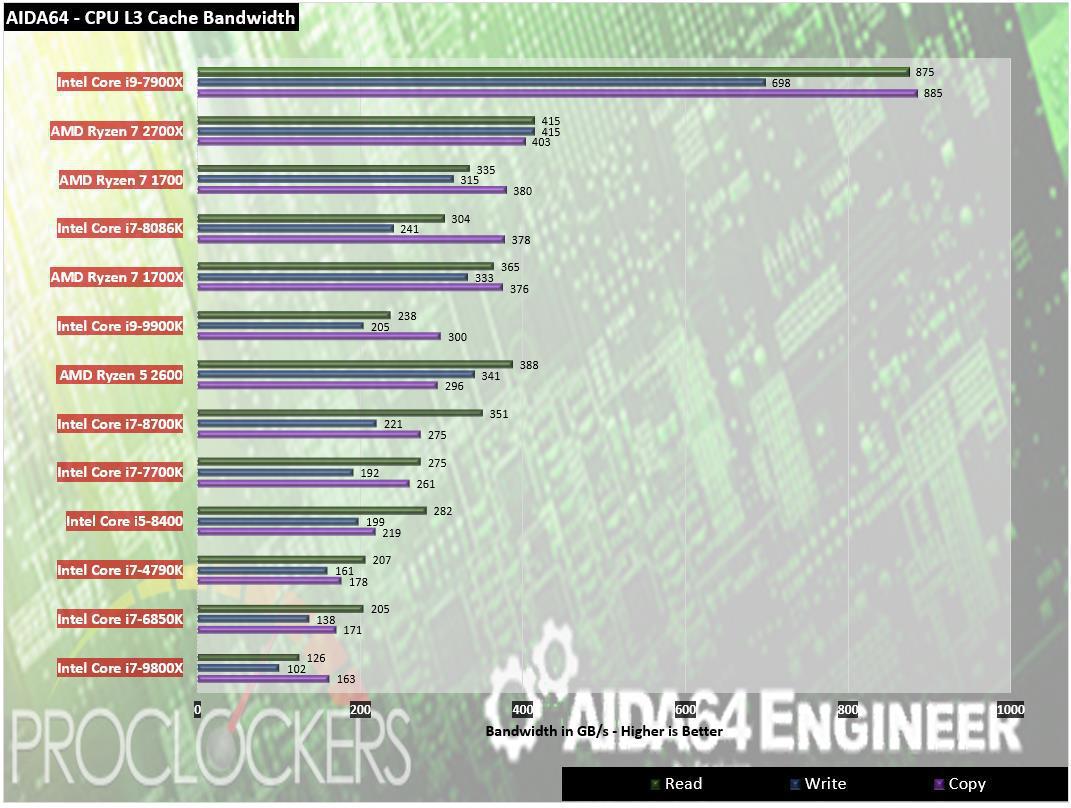 L3 cache bandwidth isn’t quite as impressive, coming in at 126GB/s and 102GB/s for reads and writes respectively. 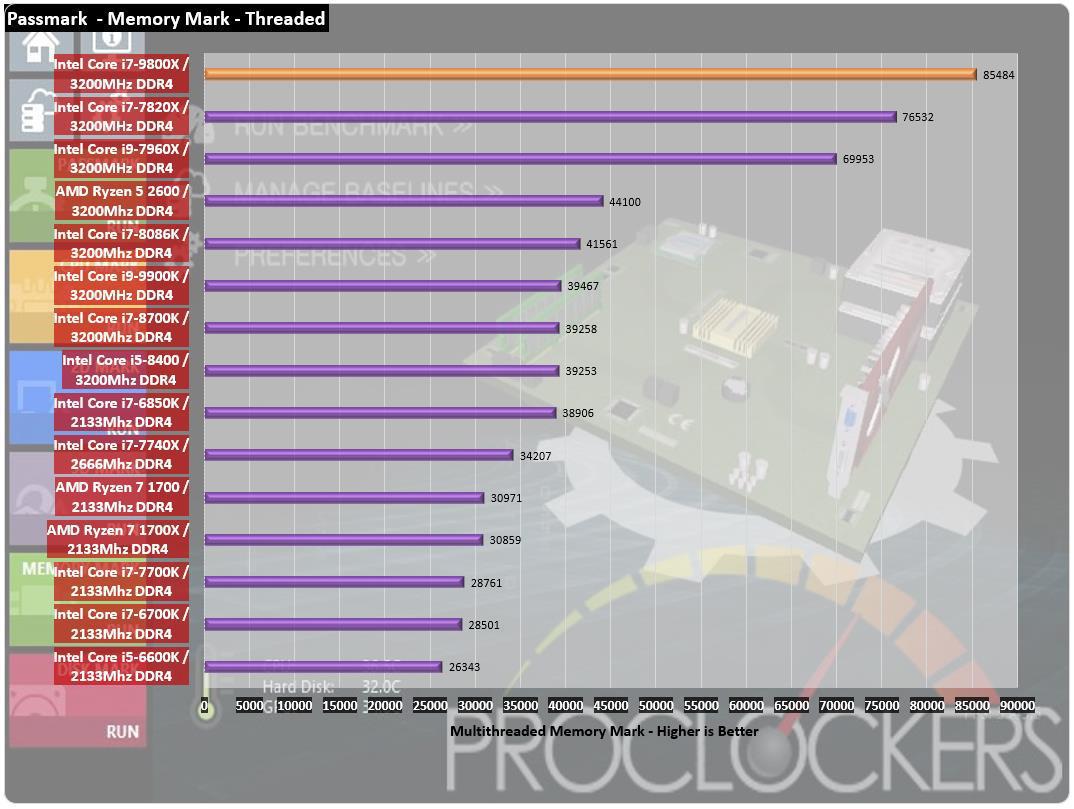 The i7-9800X isn’t anything if it isn’t strong in memory performance, and Passmark confirms this with our best score yet. 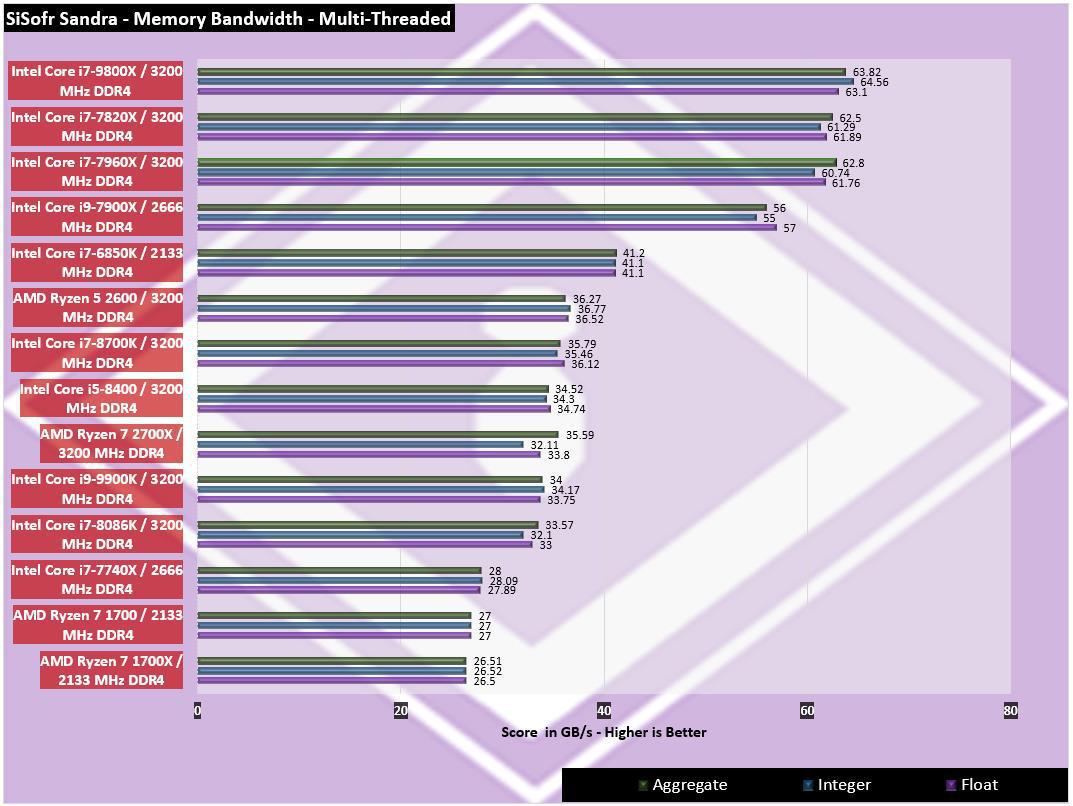 SiSoft shows very high memory bandwidth in its testing, easily clearing the 63GB/s mark in everything, our fastest yet.

The 9800X provides solid gaming performance and manages 20,274 points in the CPU only Physics test. 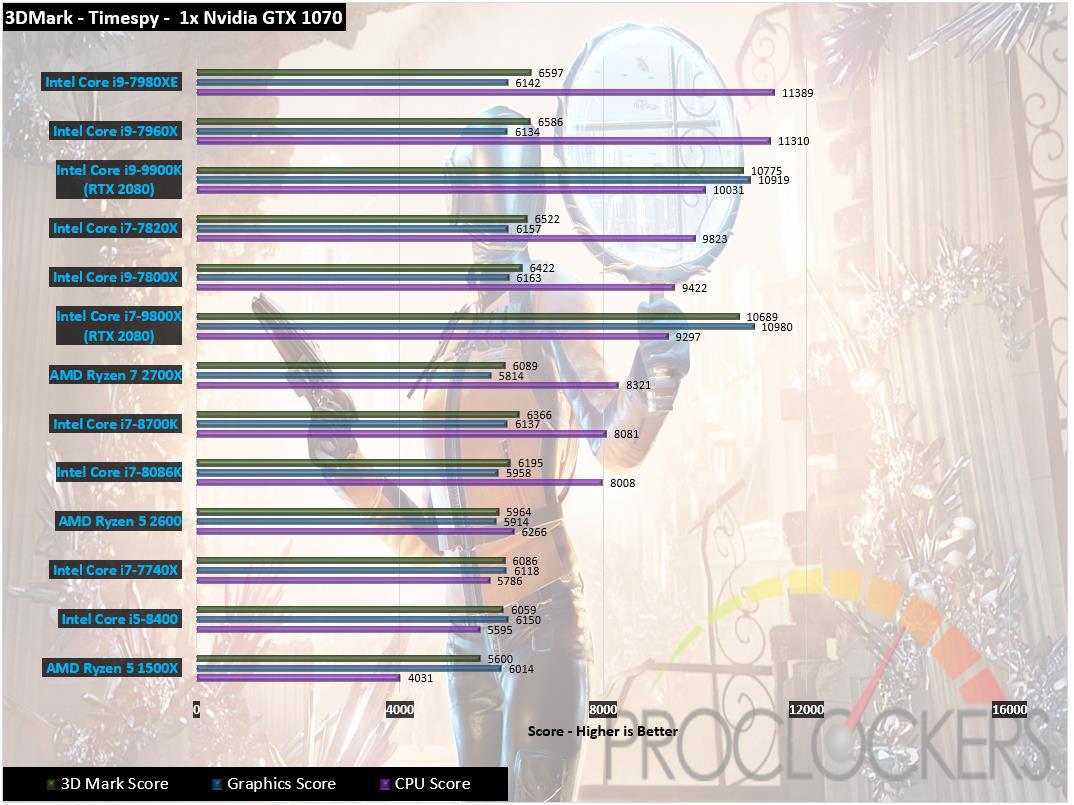 Timespy doesn’t show a huge difference between CPU scores on all of our 8-core CPUs because, at 1440p in the base test, we are leaning most heavily on the GPU. 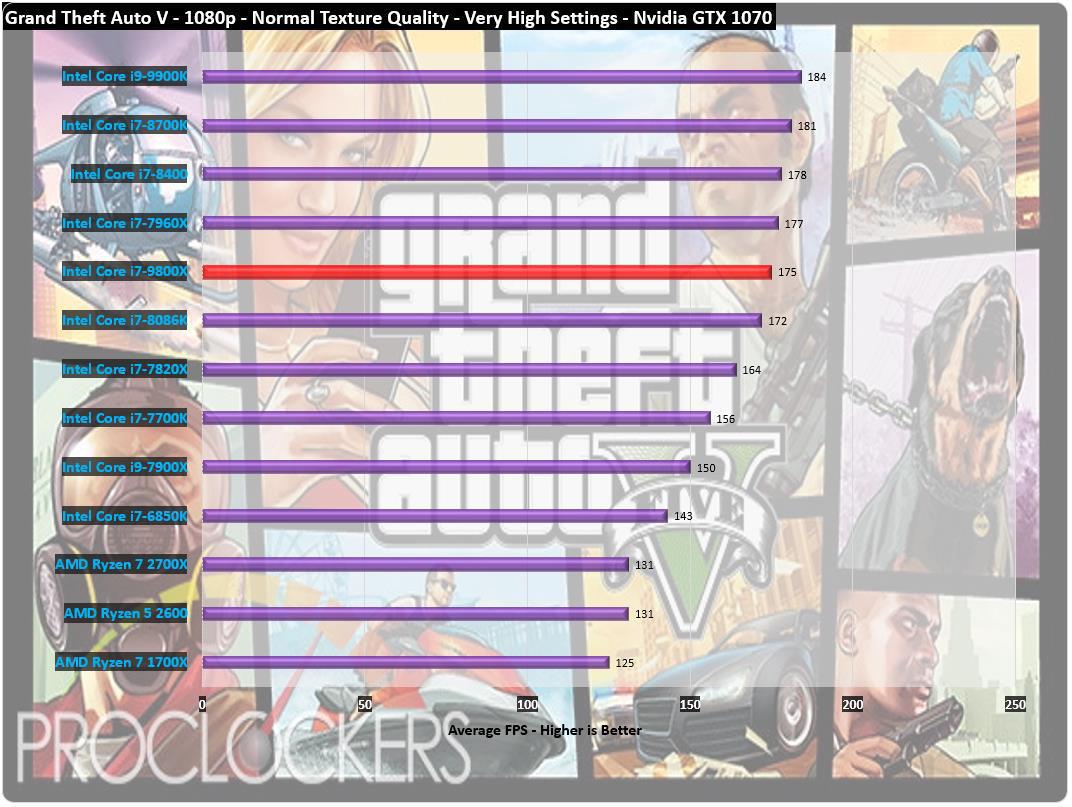 For ease of testing, we slotted in an older GTX 1070 for this testing to keep our comparison. This and the next game will be tested with this instead of our more recent standard RTX2080. At 1080P and less than maximum settings, this game is very CPU bound by the game engine. The 9800X slides in at 175FPS average. 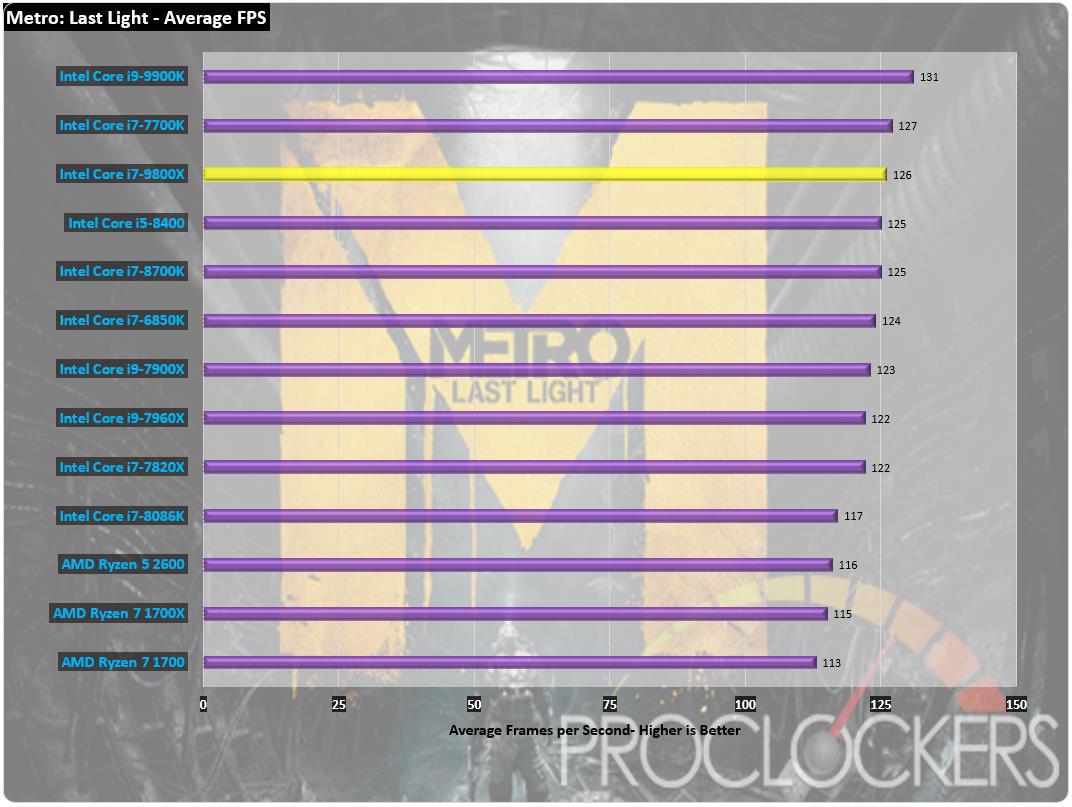 Metro fares pretty well with a slight increase over the older 7820X, but that’s still not enough to catch the 9900K.