I’ve been a multi-monitor evangelist since the CRT days, and one of my biggest pet peeves is having to use a laptop with just one monitor. A single monitor is enough for some, but I simply cannot be productive if I am restricted to a single screen. In the past, I have solved this issue by purchasing laptops that feature multi-monitor setups, such as Lenovo’s W701DS circa 2011. That laptop weighed over 11-pounds, and its second monitor was exceptionally dim, had poor color quality, and just never worked well. I lugged the W701DS behemoth around the Consumer Electronics Show in 2011 for five days straight, and when I returned home, I never took it on a business trip again due to its cumbersome weight and size.

Another attempt at a portable multiple monitor laptop setup happened a few years later when several tech companies began releasing 13-inch Display-Link based portable monitors. Unfortunately, these too suffered from poor back-lighting, low pixel density, and they required an external power source to even work. Not to mention, they were thick and heavy. So you can understand my skepticism when I was contacted by a company named Lepow and was asked to review their new 15.6-inch 1920×1080 full HD, IPS, USB C portable monitor. I agreed, and a week later, the monitor was sitting on my doorstep. 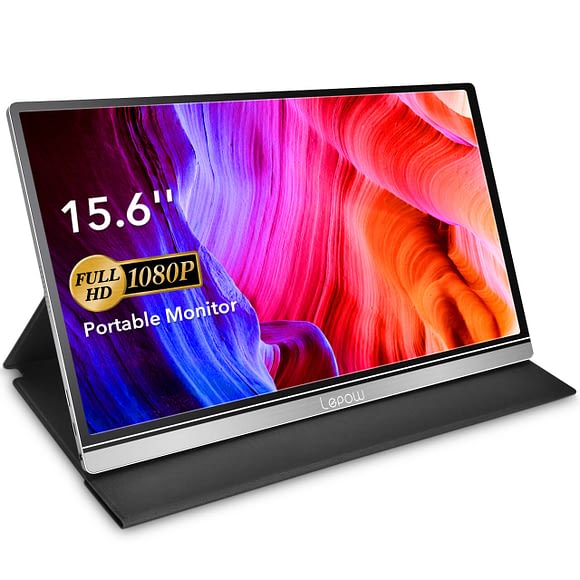 Available on Amazon for under $200, Lepow says that “This USB C monitor delivers stunning 1920 x 1080 resolution visuals with awesome color reproduction. The IPS screen delivers a vivid image and an awesome viewing experience when extending your screen or playing games. This monitor is compatible with modern laptops, PCs, some smartphones, PS4, XBOX ONE, Wii or Nintendo Switch, etc. You can connect any of your devices to this portable monitor easily via Type-c or Mini HDMI port to display everything from business presentations, games, videos, TV series, photos, and more. With a slim 0.3-inch profile and just 1.76 pounds, Lepow 15.6 inch portable monitor is ideal for your life and work to make a simple setup on-the-go dual-monitor and mobile presentations.”