All benchmarks are run using stock settings on the CPU, which leaves XFR2 enabled for some automatic boosting. We set our ram to its XMP rated speeds of 3200MHz @ 16-18-18-38. Games where ran at a resolution of 1920 x 1080 and higher presets used as indicated.

PCMark 10 is the complete benchmark for the modern office. It is the ideal test for organizations that are evaluating PCs for a workforce with a range of performance needs. The tests in this benchmark cover a wide range of activities from everyday productivity tasks to demanding work with digital media content.
PCMark 10 uses a modular approach to build relevant benchmark tests around common end-user scenarios. A Test Group is a collection of workloads that share a common theme or purpose. There are four test groups in PCMark 10, we use three of them. Essentials: covers the common, everyday ways that people use a PC. The workloads include Web Browsing, Video Conferencing, and App Start-up time.  Productivity: measures system performance with everyday office applications. This test group includes the Spreadsheets and Writing workloads. Digital Content Creation: This test group’s workload reflects the demands of working with digital content and media. The tests include Photo Editing, Video Editing, and Rendering and Visualization. 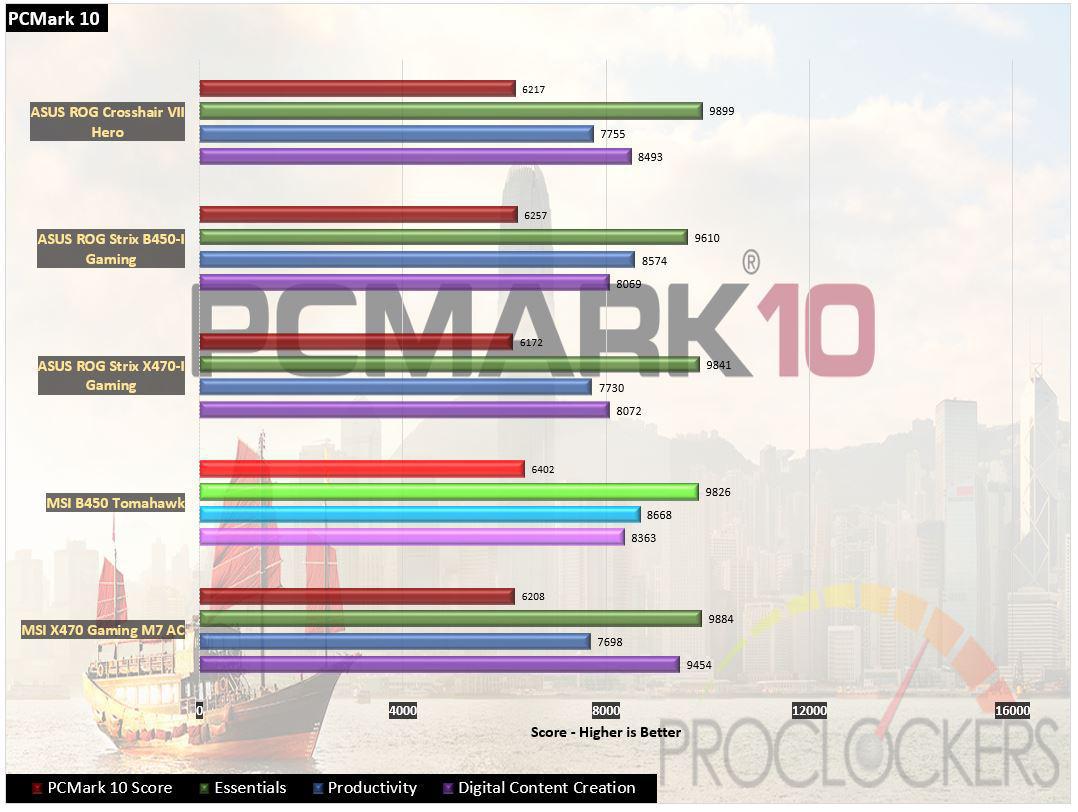 Given this is a more affordable mainstream level board, you expect it to get trounced by the higher end X470 offerings but that isn’t quite the case here. 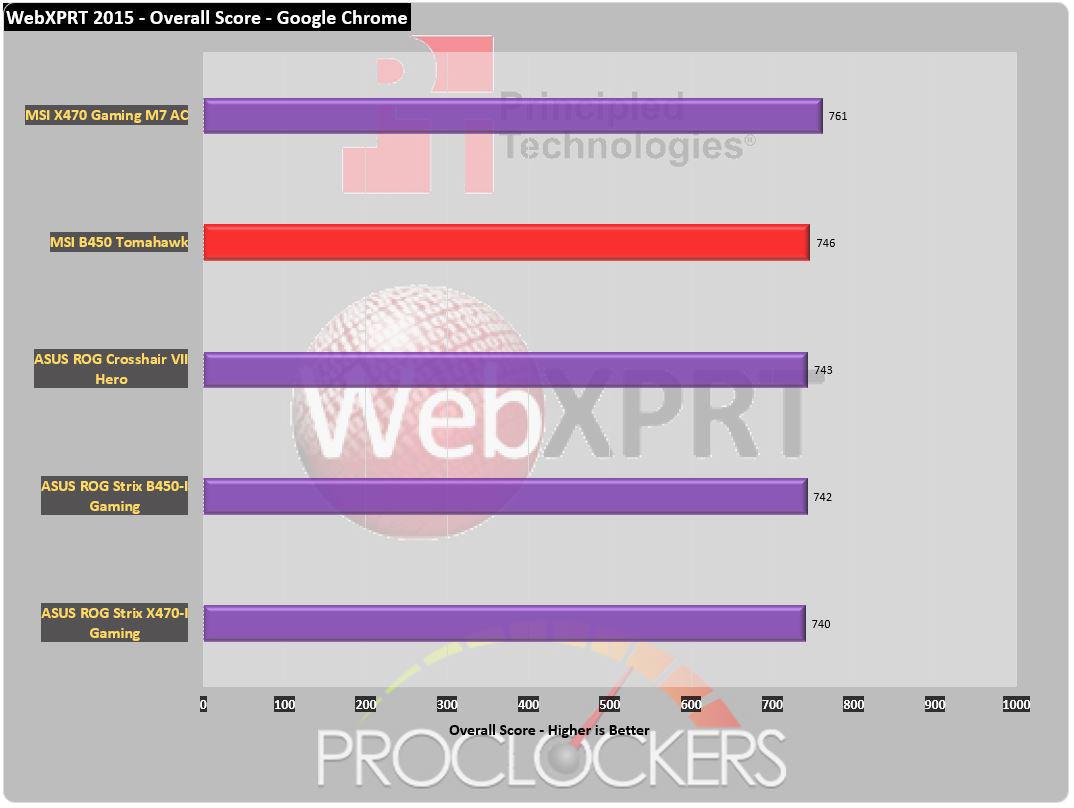 In the browser-based WebXPRT 2015, the B450 Tomahawk does really well, only loosing out to the X470 Gaming M7. 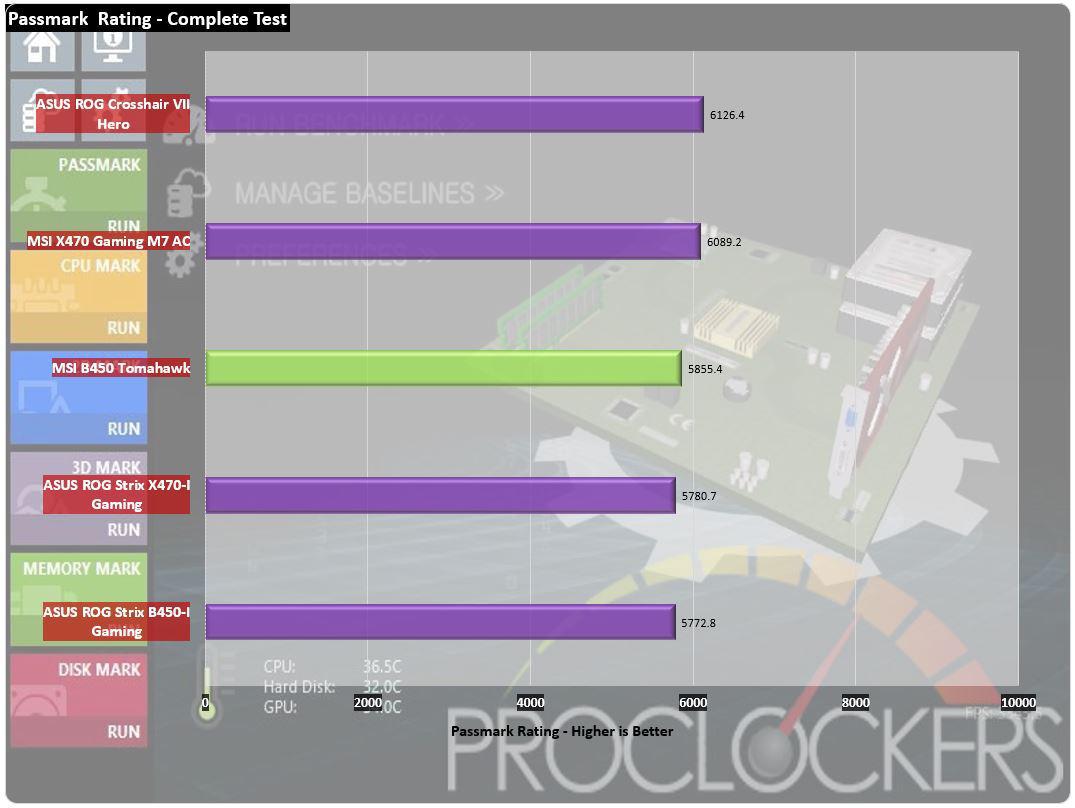 It’s always interesting to see complete system scores land where you don’t expect them. B450 doesn’t seem to hold the Tomahawk back in the least. 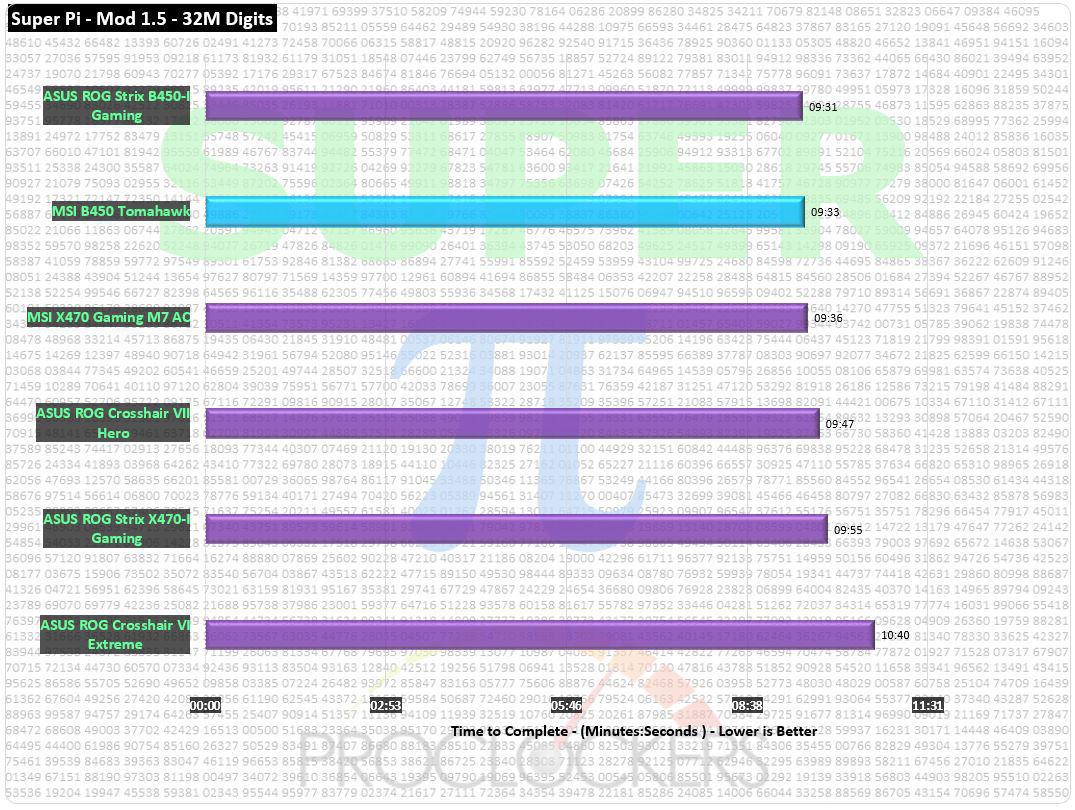 Even hitting only a single core, Super Pi slides into the finish line at 9 minutes and a shade under 33 seconds, one of our best Ryzen times to date.

“CINEBENCH is a real-world cross platform test suite that evaluates your computer’s performance capabilities. CINEBENCH is based on MAXON’s award-winning animation software CINEMA 4D, which is used extensively by studios and production houses worldwide for 3D content creation. MAXON software has been used in blockbuster movies such as Iron Man 3, Oblivion, Life of Pi or Prometheus and much more. CINEBENCH is the perfect tool to compare CPU and graphics performance across various systems and platforms (Windows and OS X). And best of all: It’s completely free.” 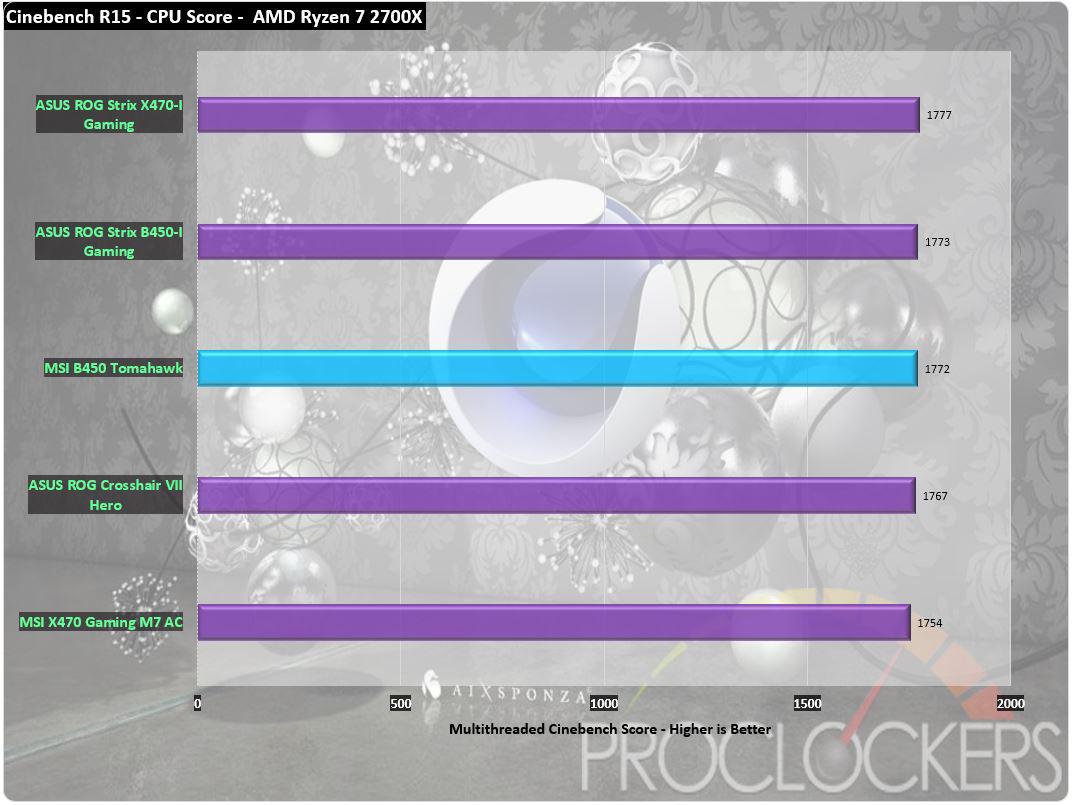 Even with all cores in play, the B450 Tomahawk misses first place by a mere 5 points.

The benchmark shows a rating of MIPS (million instructions per second). The rating value is calculated from the measured speed, and it is normalized with results of Intel Core 2 CPU with multi-threading option switched off. So if you have modern CPU from Intel or AMD, rating values in single-thread mode must be close to real CPU frequency. There are two tests, compression with LZMA method and decompression with LZMA method. Once the total passes reach 100, the score is taken. 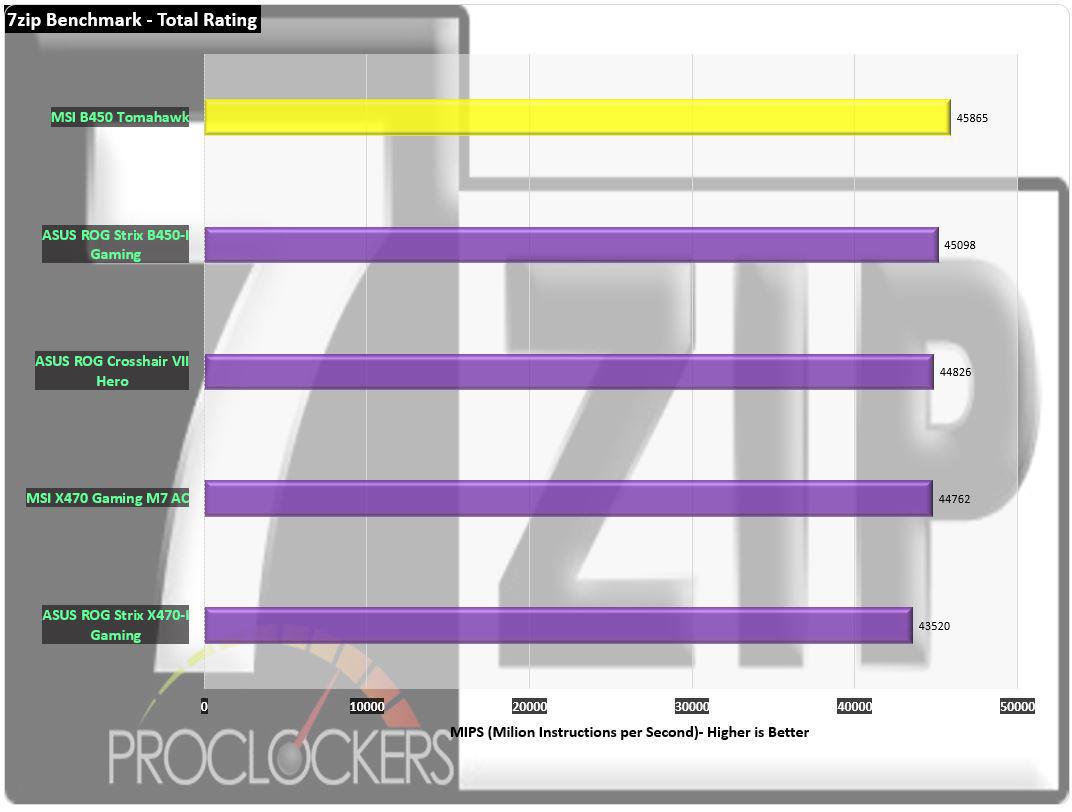 On 7zip it makes it to gold with a score of nearly 46k points. 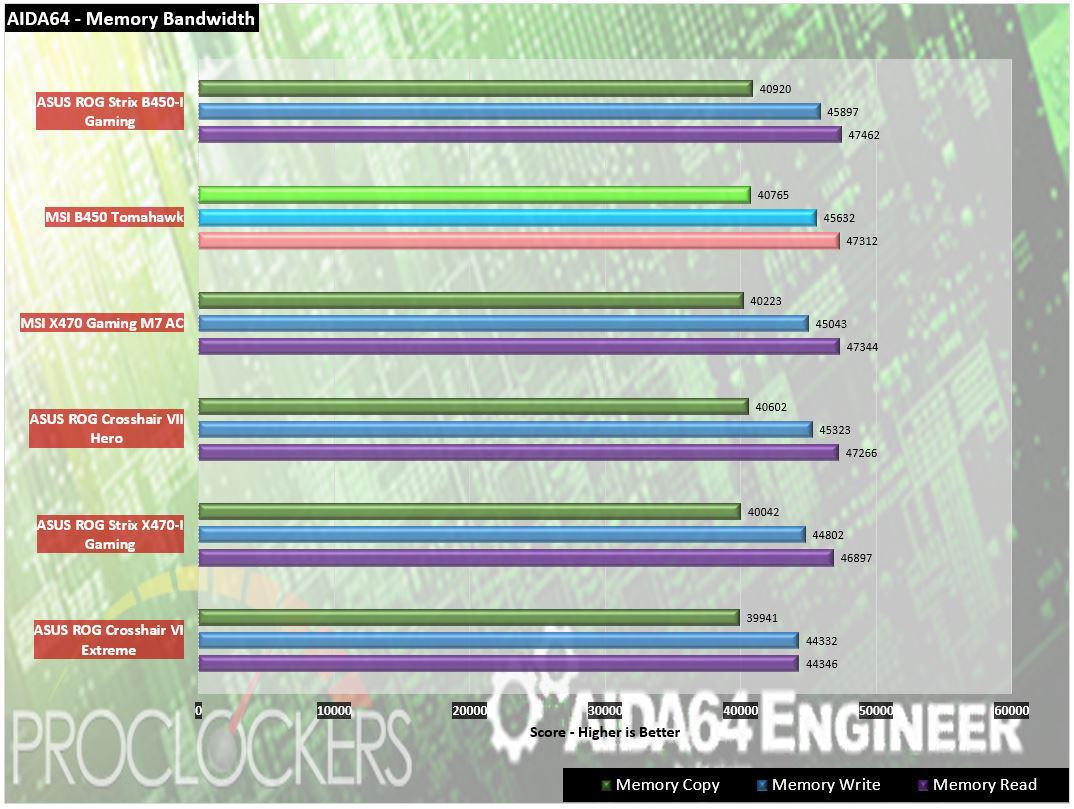 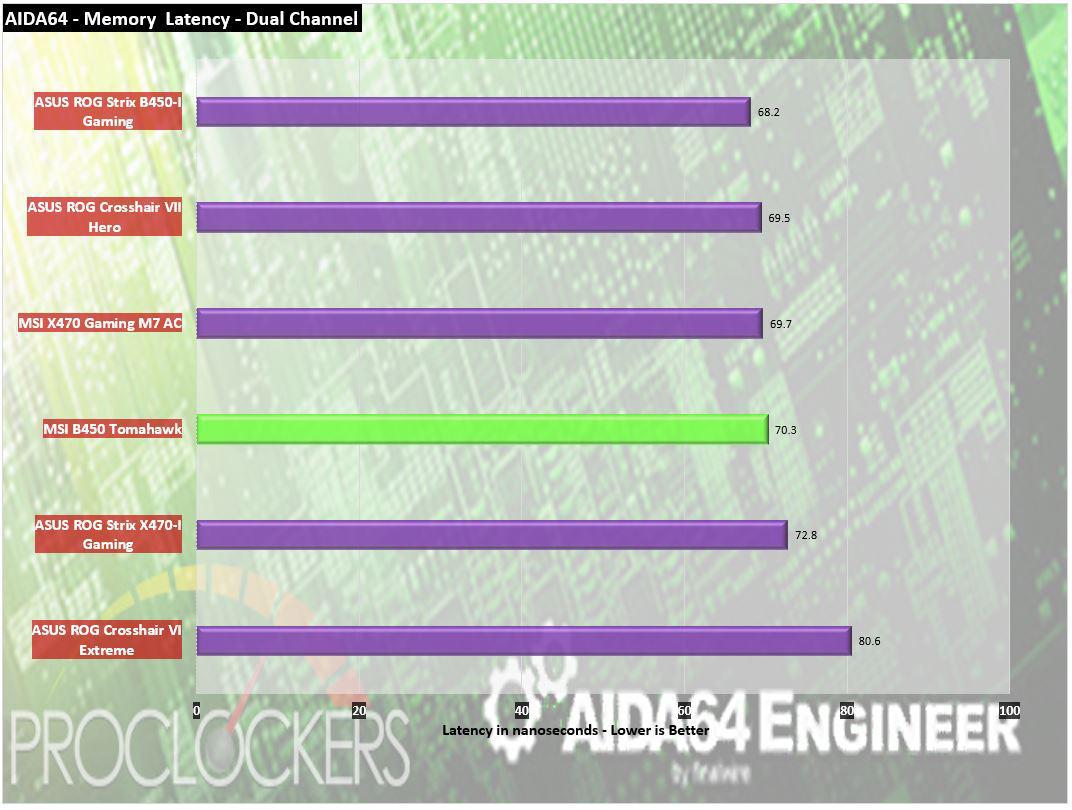 Memory latency is a solid but not class leading 70.3 nanoseconds. 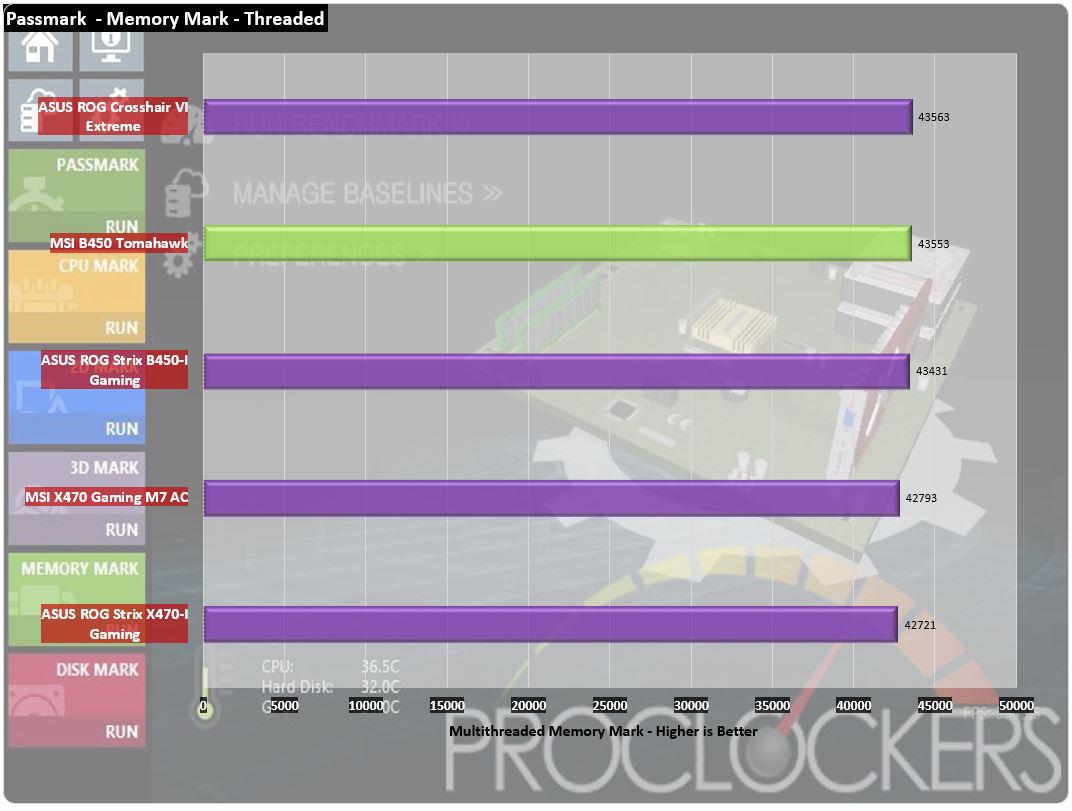 In Passmark, the Tomahawk is 10 points behind the leader on Memory Mark. 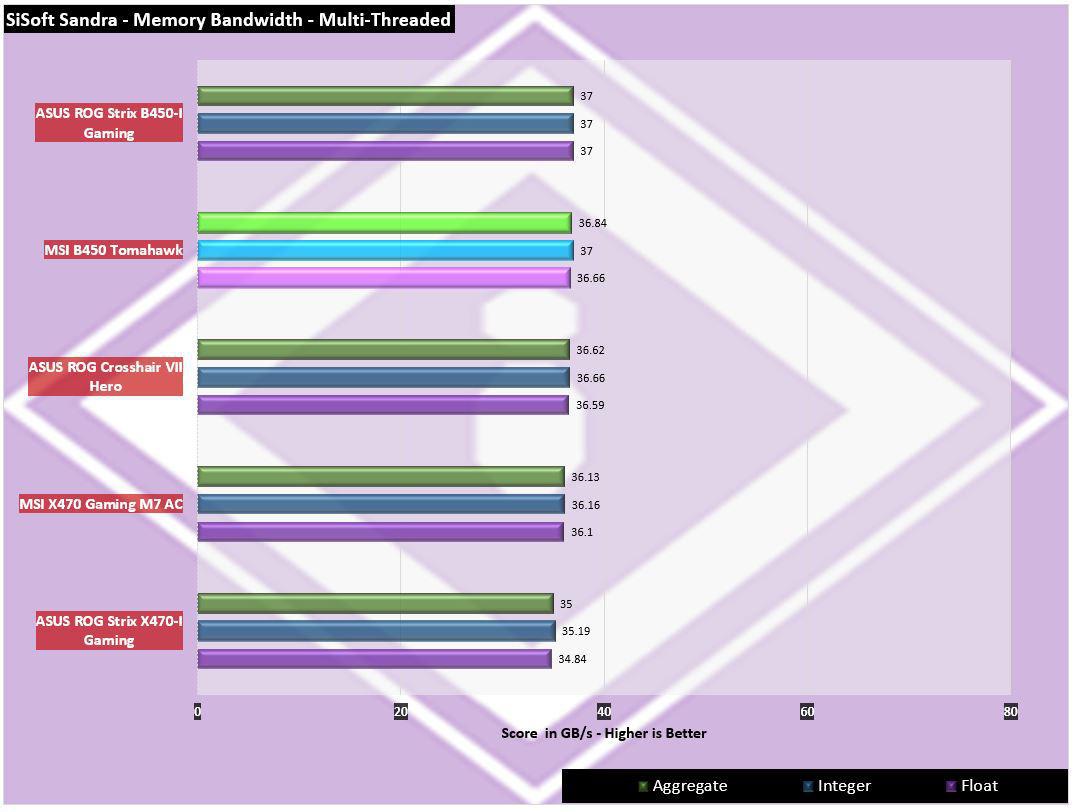 Sisoft Sandra places the Tomahawk second, but still edging out all of the X470 platforms. 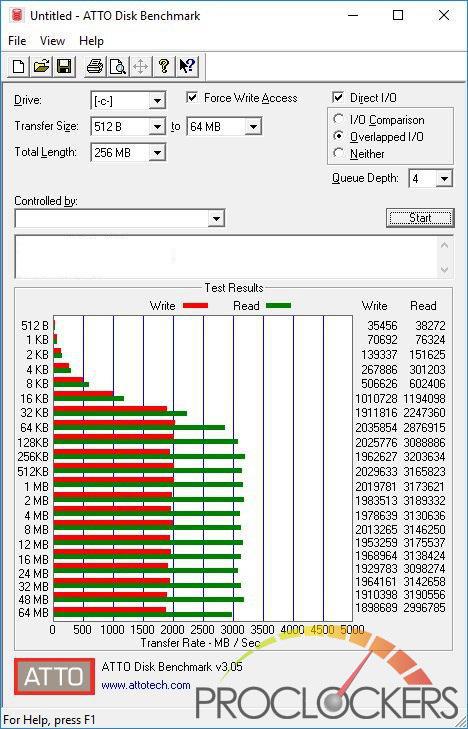 Bandwidth to the M.2 slot is not impacted much as we hit only a few hundred MB/s short of the peak performance of our drive. 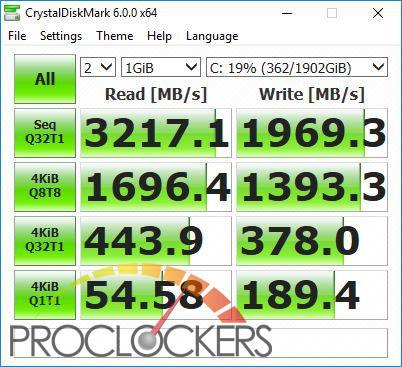 CryatalDiskMark shows about the same numbers as ATTO with sequential reads hitting 3.2GB/s and writes hovering right around the 2GB/s level.

The AS SSD benchmark determines the performance of Solid State Drives (SSD). The tool contains six synthetic and three copy tests. The synthetic tests determine the sequential and random read and write performance of the SSD. These tests are performed without using the operating system cache. In the sequential test, the program measures how long it takes to read and write a 1 GB file. In the 4K test, read and write performance is determined for randomly selected 4K blocks. The 4K-64 Third test is equivalent to the 4K procedure, except that the read and write operations are distributed to 64 threads. This test should show differences between the IDE operating mode where NCQ is not supported and the AHCI mode for SSDs with Native Command Queuing (NCQ). The additional compression test can measure the performance of the SSD as a function of the compressibility of the data. This is especially important for the controllers that are used to increase the performance and life of the cell compression. 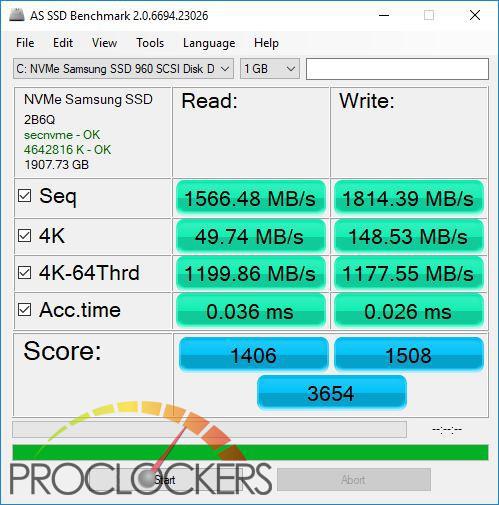 AS SSD shows a hair lower on reads than normal, but it has a different testing methodology than the other programs. 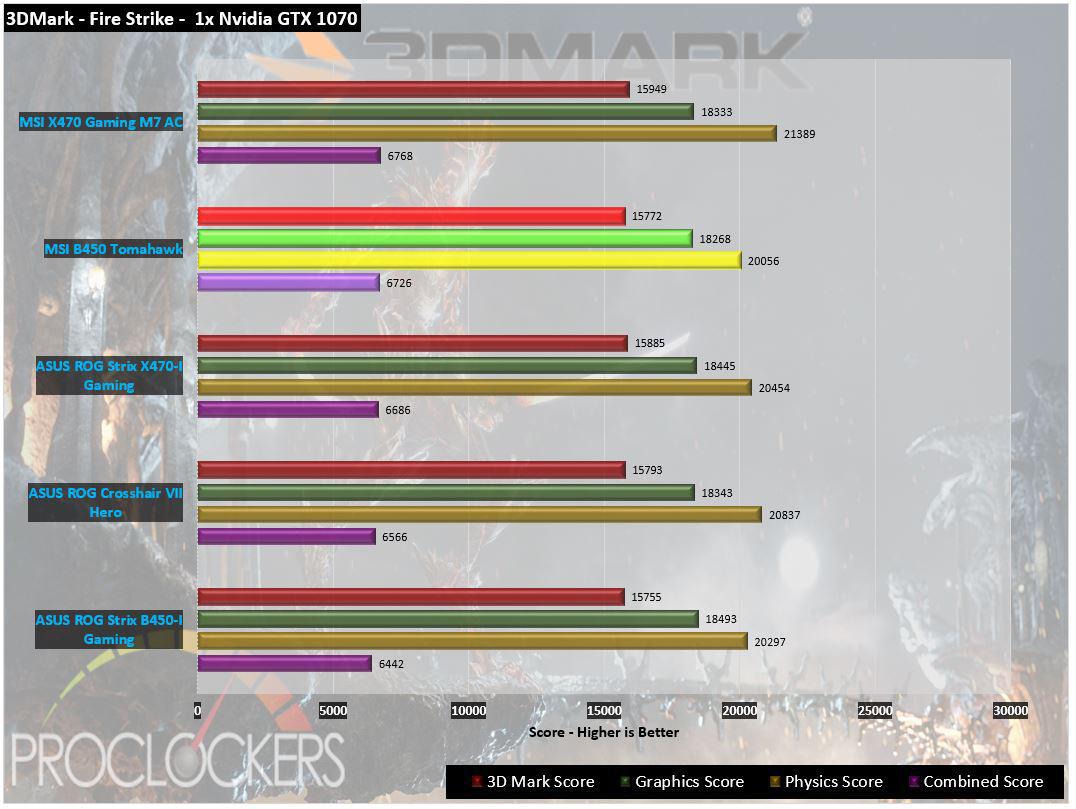 For a gaming oriented board, the Tomahawk doesn’t disappoint. 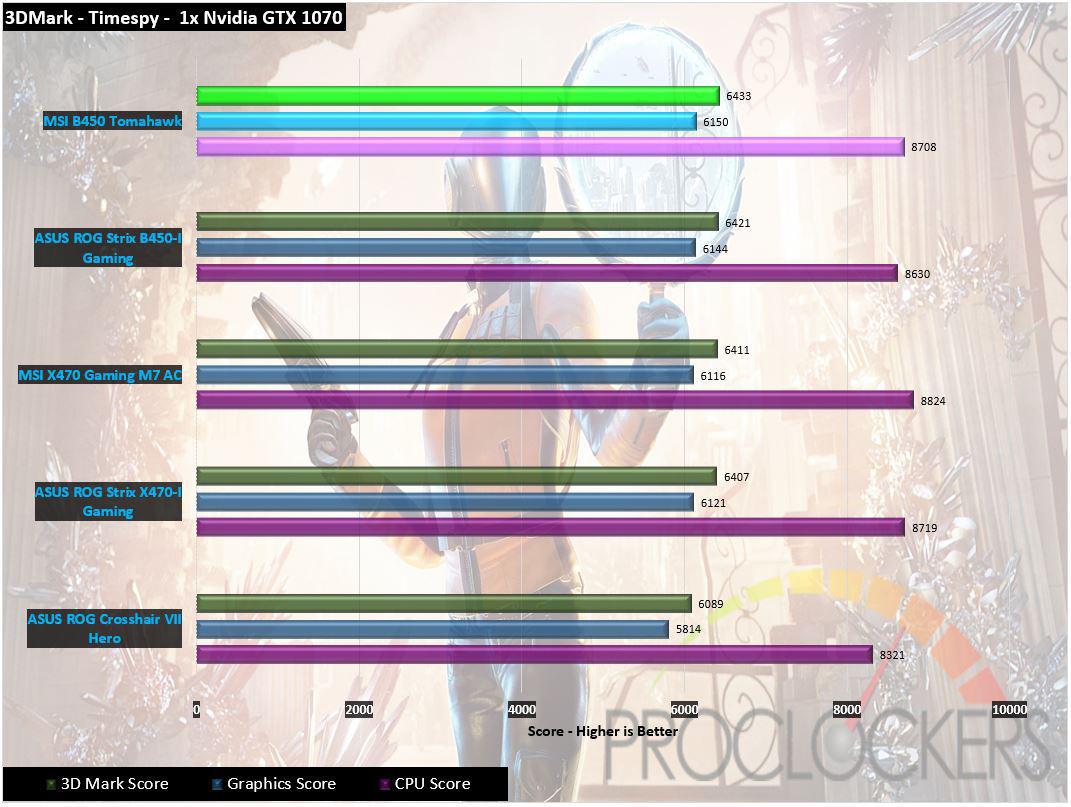 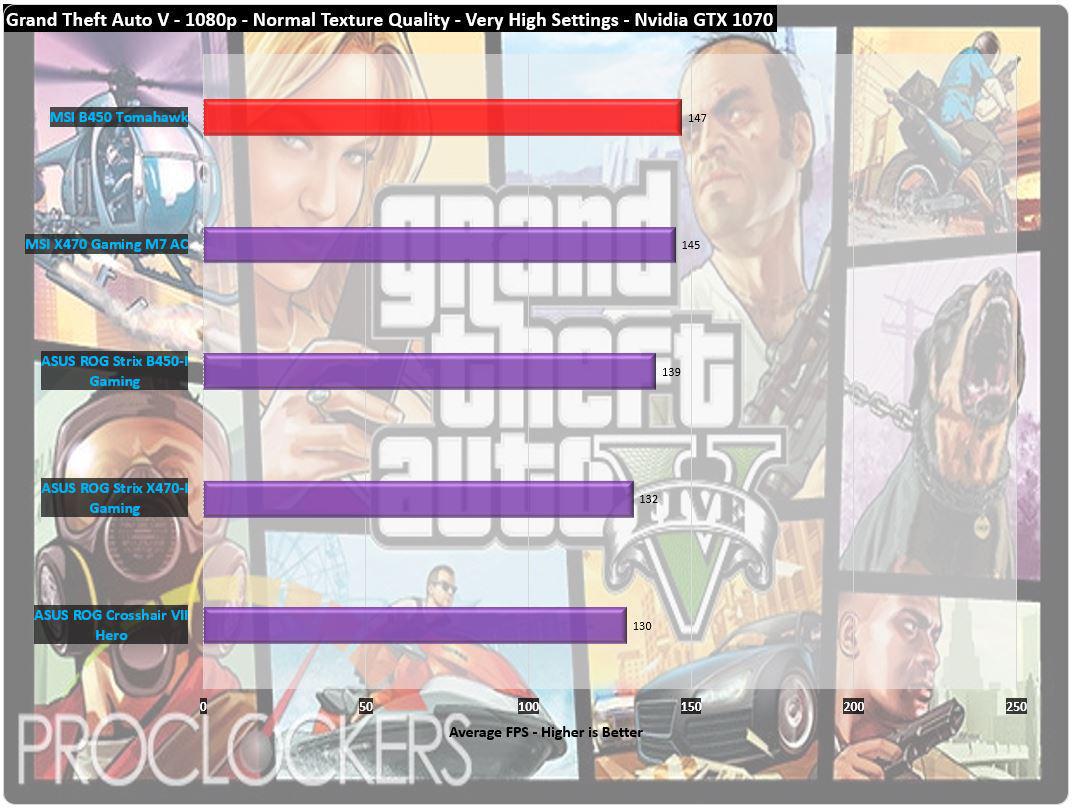 Synthetics tests paint a good picture, but real-world testing of games has to do good too and we are off to a great start with Grand Theft Auto V.

Welcome to Hope County, Montana, land of the free and the brave, but also home to a fanatical doomsday cult—known as The Project at Eden’s Gate—that is threatening the community’s freedom. Stand up to the cult’s leaders, Joseph Seed and the Heralds, as you spark the fires of resistance that will liberate the besieged community. 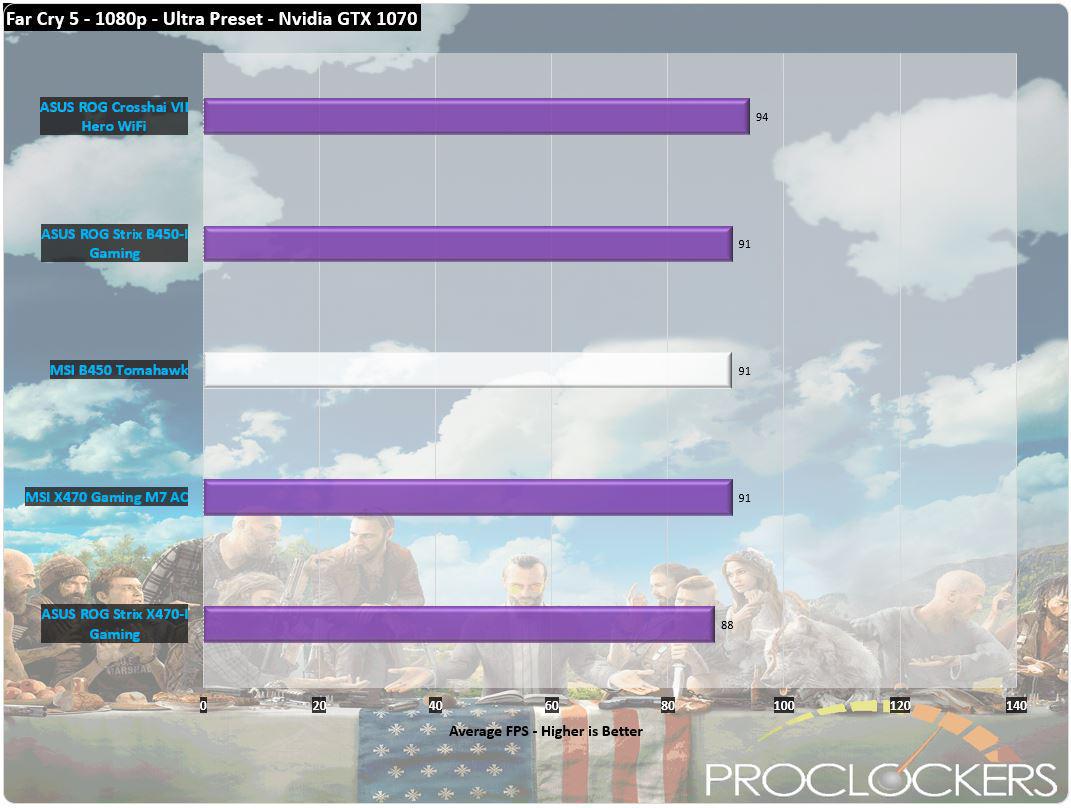 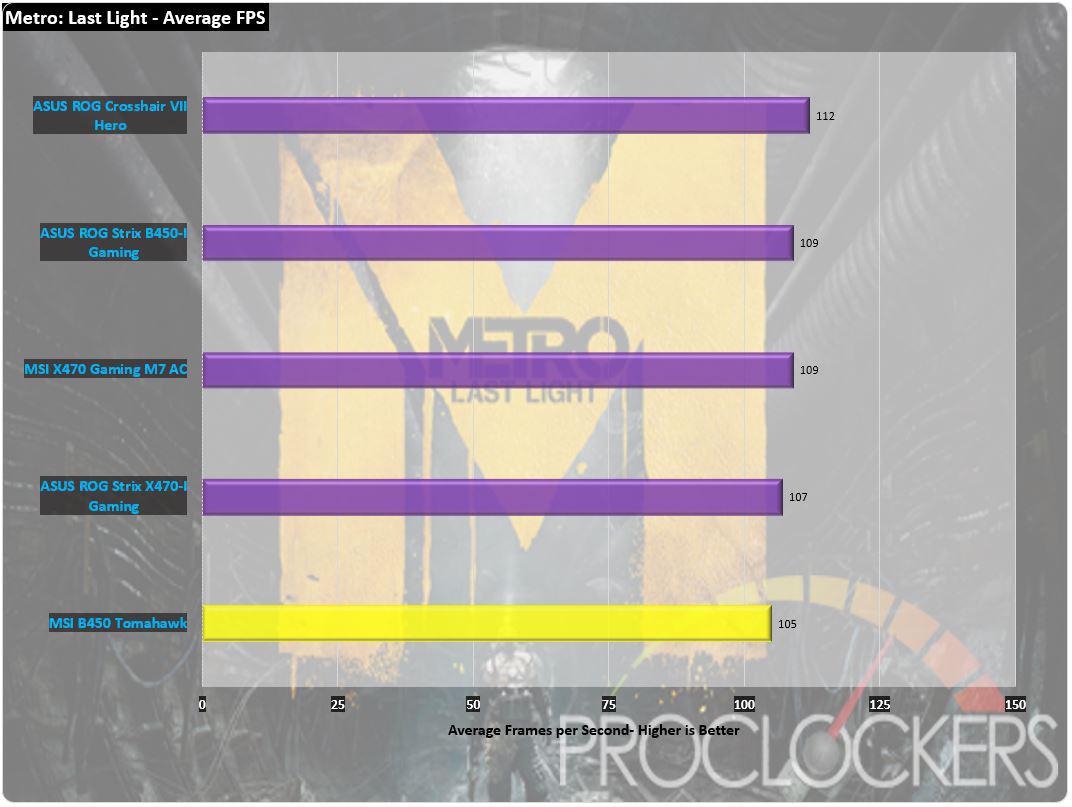 On Metro: Last Light, the Tomahawk does decent, but doesn’t quite lead the pack.

The year is 2029, and mechanically augmented humans have now been deemed outcasts, living a life of complete and total segregation from the rest of society. Now an experienced covert operative, Adam Jensen is forced to operate in a world that has grown to despise his kind. Armed with a new arsenal of state-of-the-art weapons and augmentations, he must choose the right approach, along with who to trust, in order to unravel a vast worldwide conspiracy. 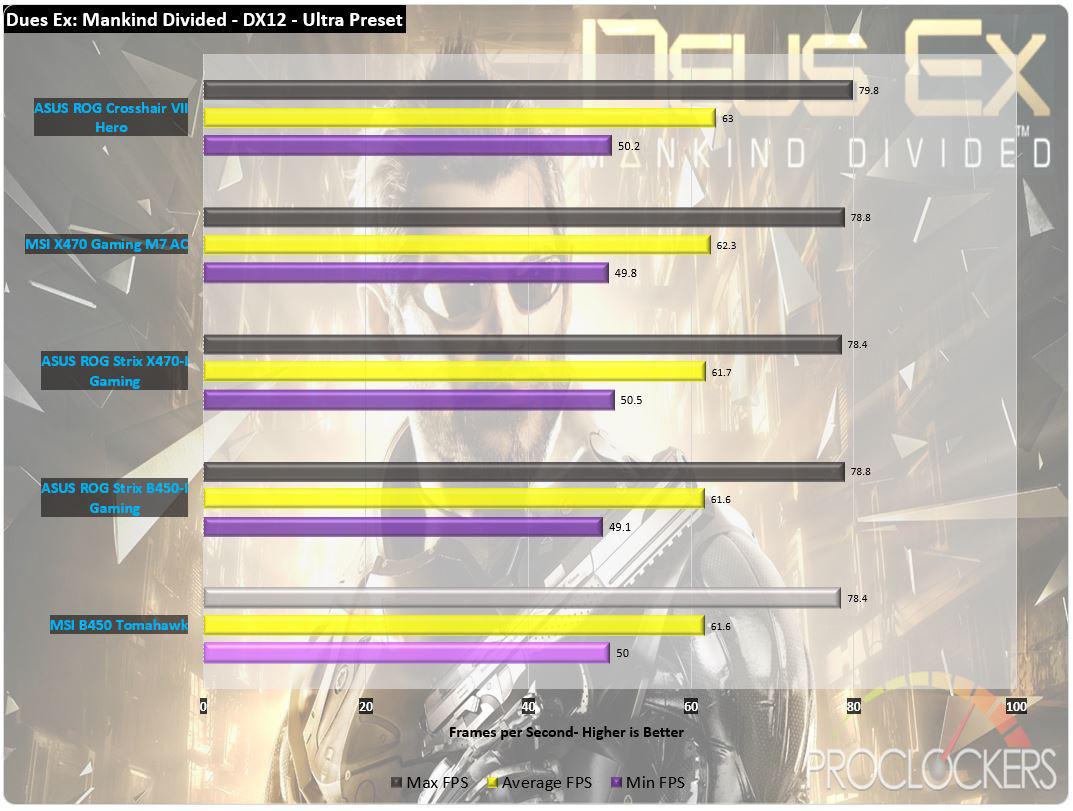 Deus Ex: Mankind Divided is almost too close to call.