Testing was performed at stock settings with the exception of system memory had its XMP profile applied. The ASUS ROG Strix GTX 1660TI was left with its default ‘Gaming Profile’ enabled.

3DMark includes everything you need to benchmark your PC and mobile devices in one app. Whether you’re gaming on a smartphone, tablet, notebook, or a desktop gaming PC, 3DMark includes a benchmark designed specifically for your hardware. 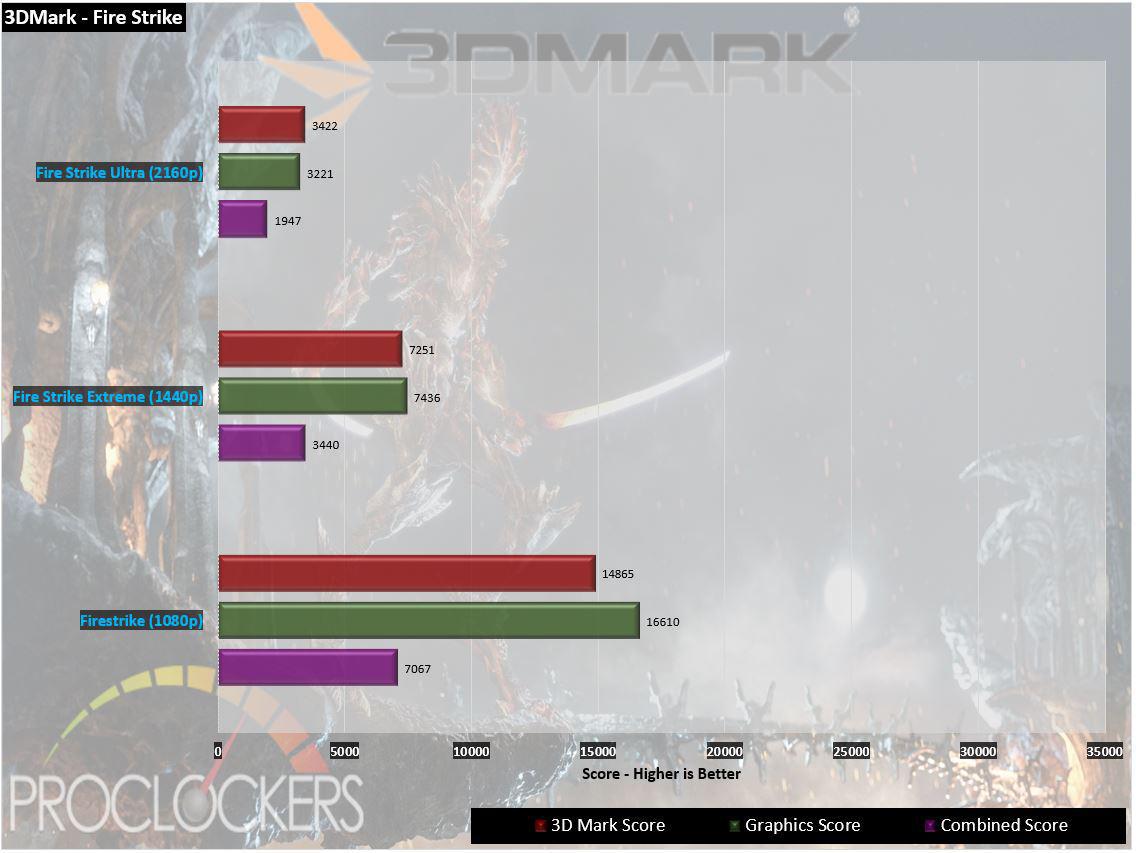 Firestrike shows the ASUS ROG Strix GTX 1660Ti OC showing some serious performance out of the gate in the 1080p and even the 1440p ‘Extreme’ tests. 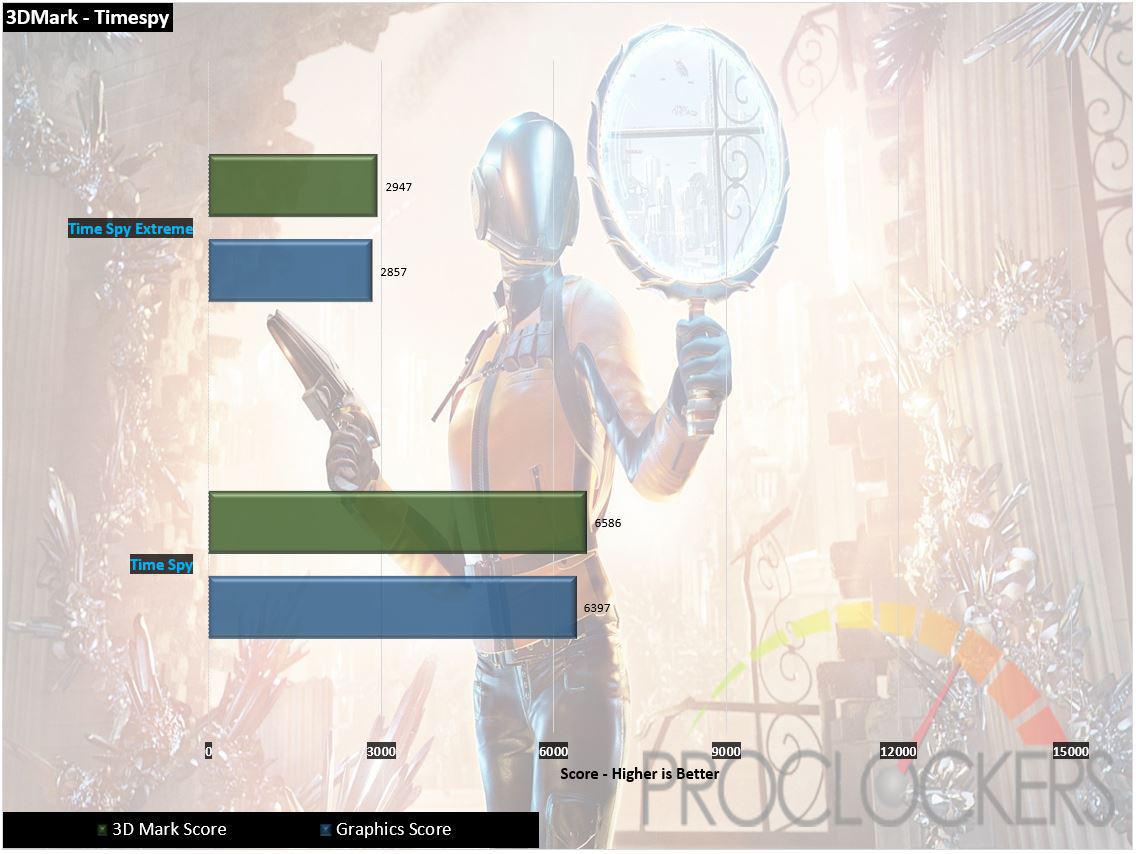 Timespy starts with a 1440p test and manages a playable ~38 FPS, but again the 4K based Extreme test struggles at around 17 FPS. For a card targeted at the 1080p crowd, this really isn’t bad at all.

The performance requirements for VR games are much higher than for typical PC games. So if you’re thinking about buying an HTC Vive or an Oculus Rift, wouldn’t you like to know that your PC is ready for VR?

VRMark includes three VR benchmark tests that run on your monitor, no headset required, or on a connected HMD. At the end of each test, you’ll see whether your PC is VR ready, and if not, how far it falls short.

Orange Room Test – The Orange Room benchmark shows the impressive level of detail that can be achieved on a PC that meets the recommended hardware requirements for the HTC Vive and Oculus Rift. If your PC passes this test, it’s ready for the two most popular VR systems available today. 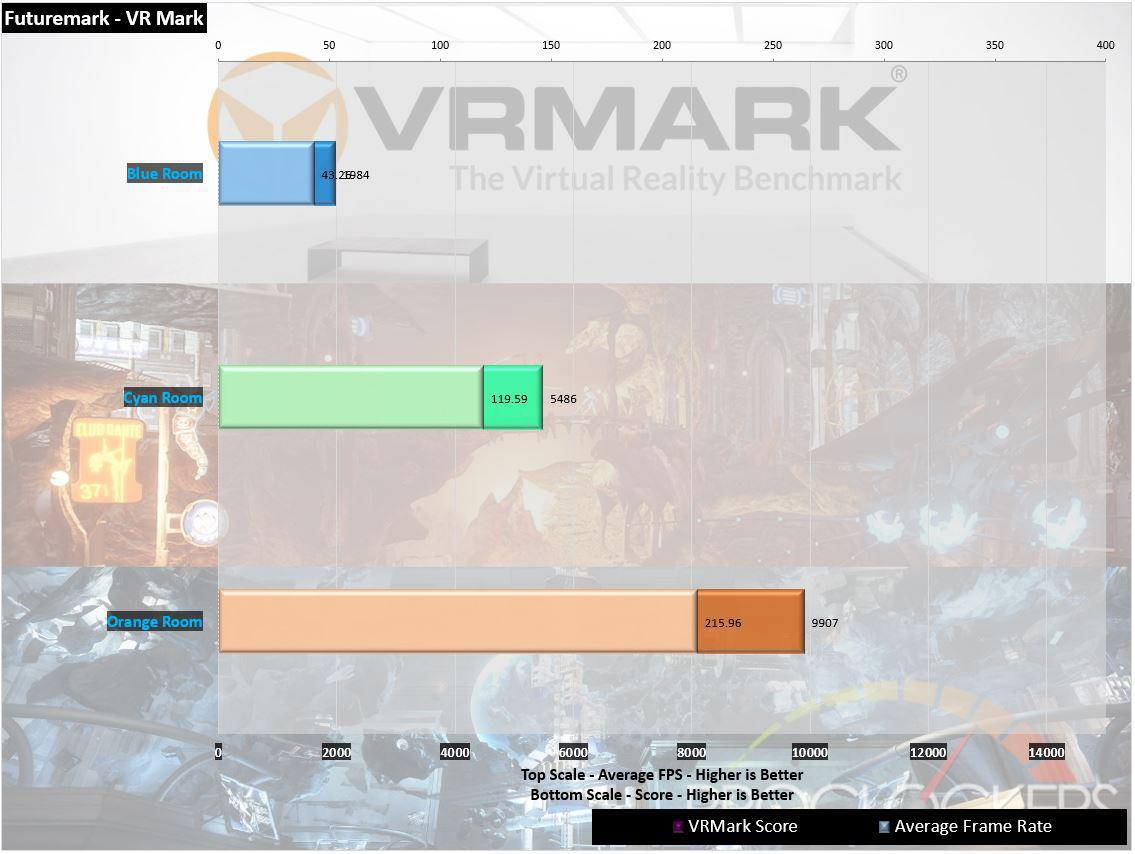 The 1660Ti Gaming X 6Greally shines in the Orange and Cyan tests, able to provide a great experience in VR in most systems. The Blue test takes its toll with an average of around 43FPS.

Heaven Benchmark is a GPU-intensive benchmark that hammers graphics cards to the limits. This powerful tool can be effectively used to determine the stability of a GPU under extremely stressful conditions, as well as check the cooling system’s potential for maximum heat output.

The benchmark immerses a user into a magical steampunk world of shiny brass, wood, and gears. Nested on flying islands, a tiny village with its cozy, sun-heated cobblestone streets, and a majestic dragon on the central square gives a true sense of adventure. An interactive experience with fly-by and walk-through modes allows for exploring all corners of this world powered by the cutting-edge UNIGINE Engine that leverages the most advanced capabilities of graphics APIs and turns this bench into a visual masterpiece. 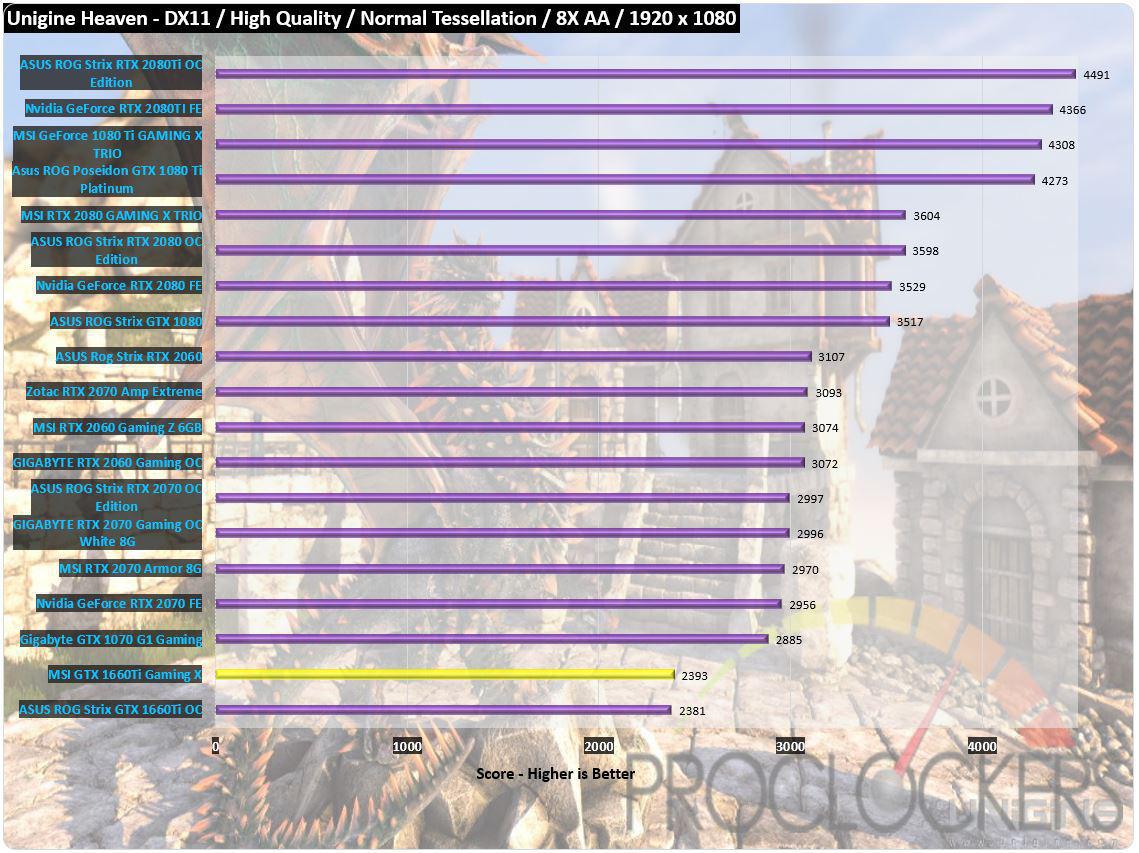 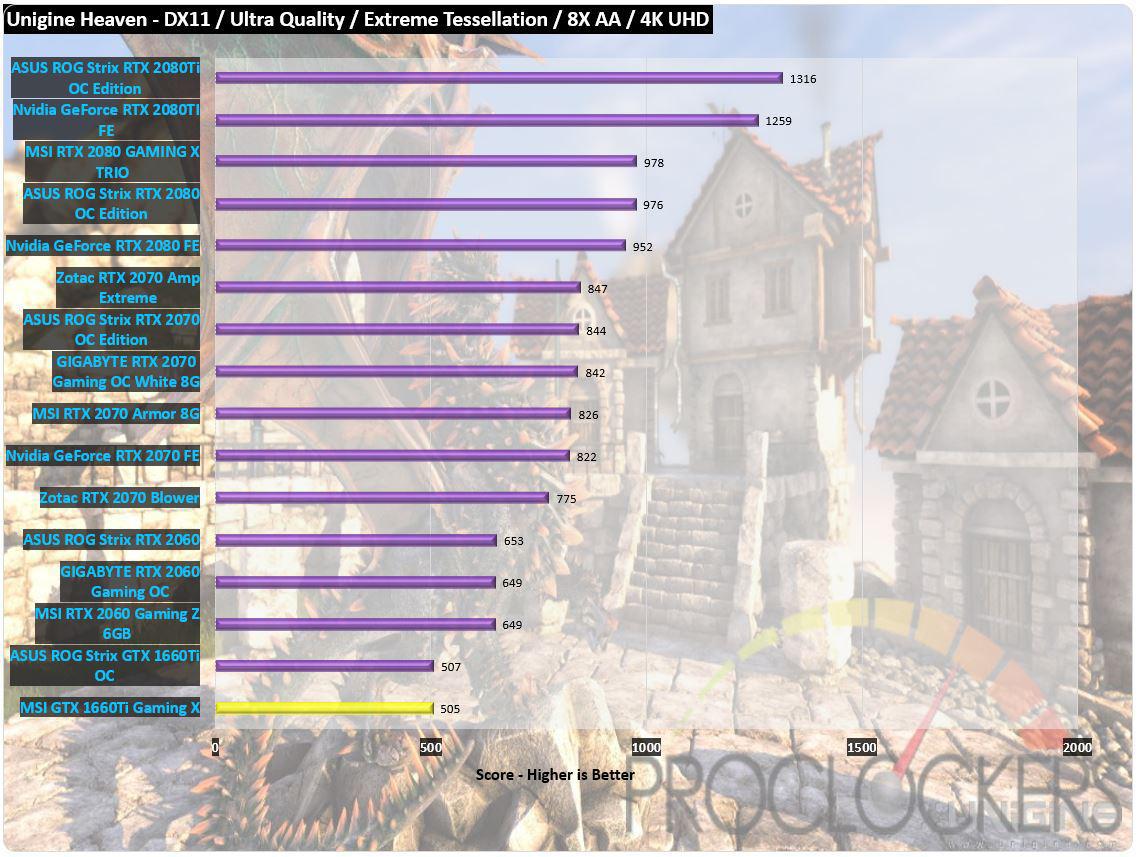 Maxing out the settings and moving up to 4K gives us 20 FPS.

A lone professor performs dangerous experiments in an abandoned classroom, day in and day out. Obsessed with inventions and discoveries beyond the wildest dreams, he strives to prove his ideas.

Once you come to this place in the early morning, you would not meet him there. The eerie thing is a loud bang from the laboratory heard a few moments ago. What was that? You have the only chance to cast some light upon this incident by going deeply into the matter of quantum theory: thorough visual inspection of professor’s records and instruments will help to lift the veil on the mystery. 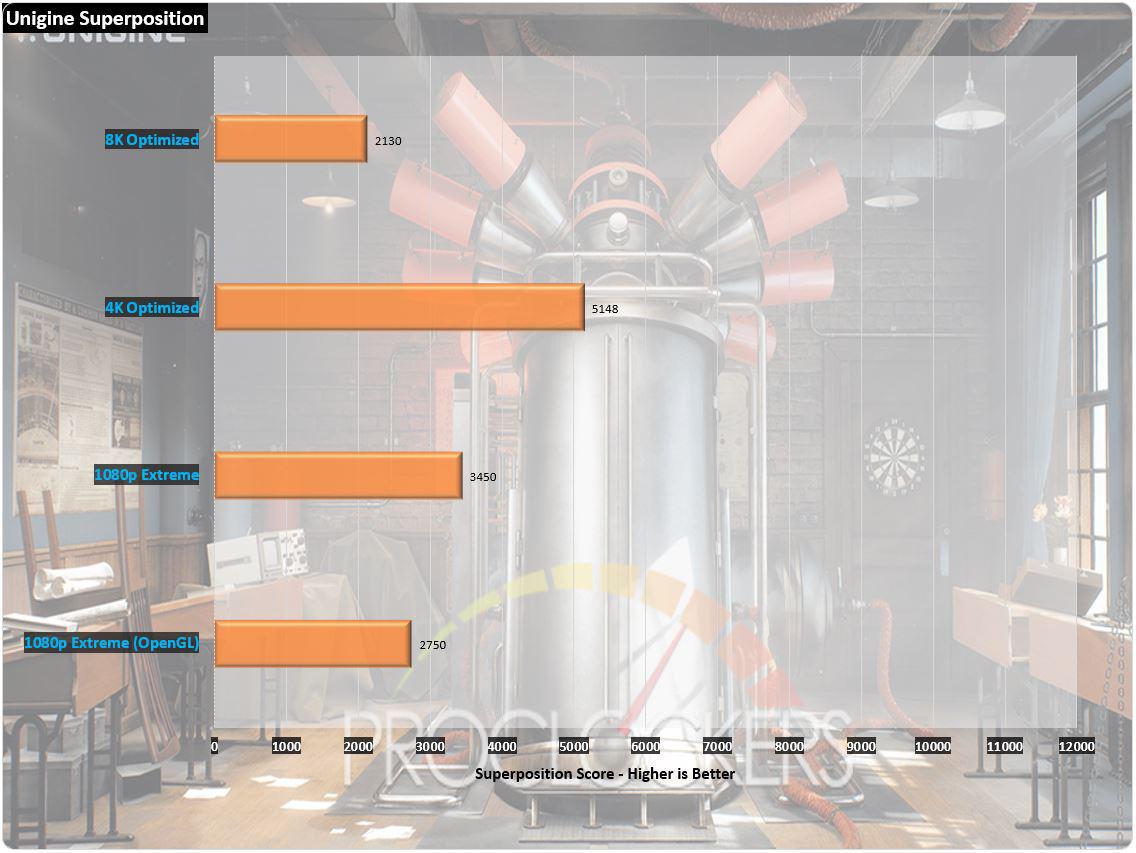 Superposition shops great performance in 1080p, even at maximum settings, 4K optimized even does well. 8K takes a hit because it actually requires slightly more than the 6GB of memory on the card.