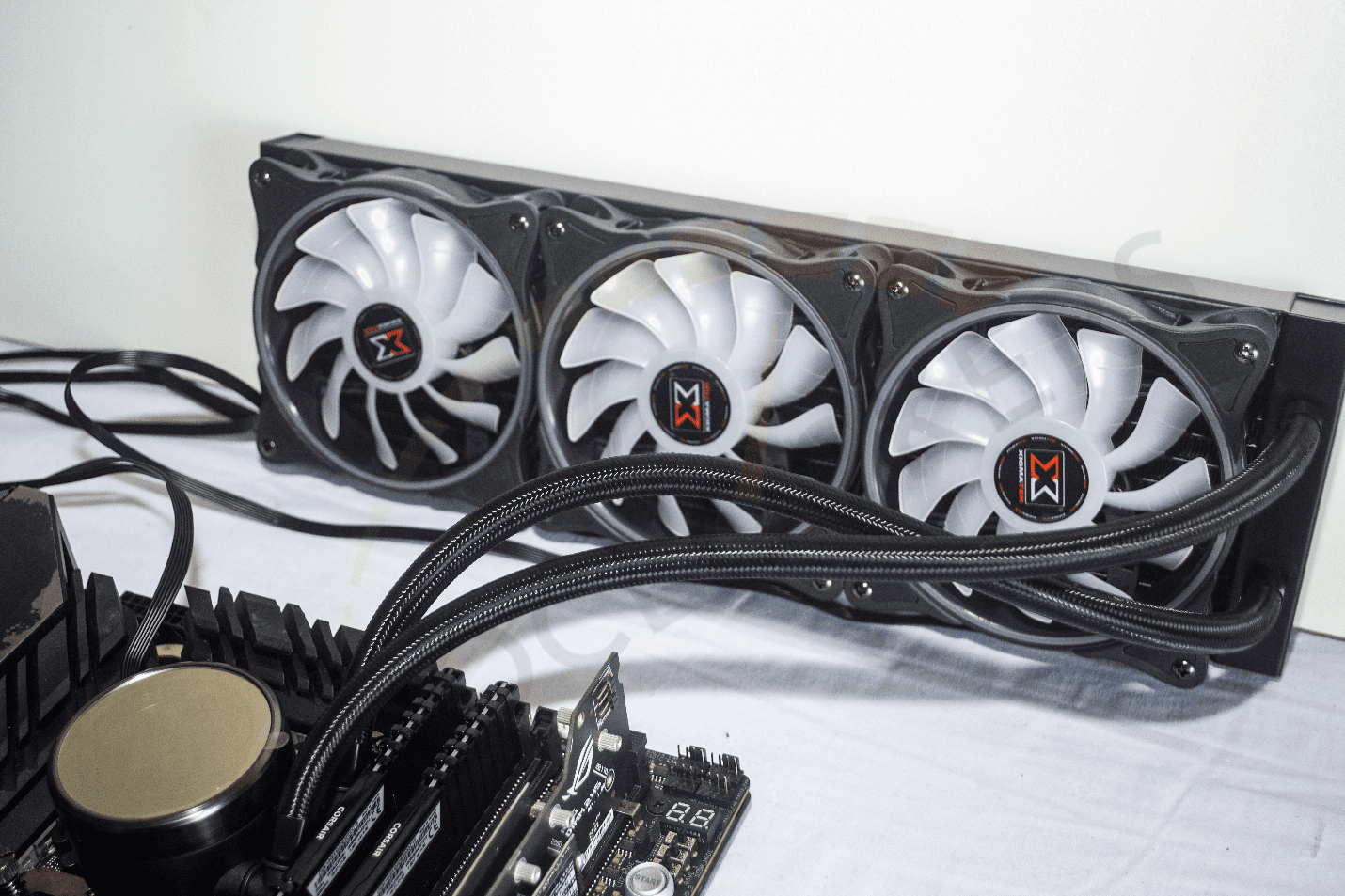 As stated earlier, fan settings are still a bit iffy, so I’ll have to try to use long idle times in hopes of changing the fan speeds which will change temperatures.

Our testing rig will be the ASUS Maximus Extreme XII fitted with 16GB of Corsair Vengeance LPX 3000Mhz RAM, RTX 2080ti Aurous Extreme, 2x Western Digital 1TB NVme drives, and one beast of a CPU which is the Intel i9 10900k, all on Windows 10 with the latest updates.

First, I wanted to see how low I could get the idle temps. Since fan speed only changed by 200rpm apparently, I didn’t do a test of the different idle temps based on higher RPMs, so this is based off the idea that the fans are going at 1800RPM; their max, regardless of button press or software settings. 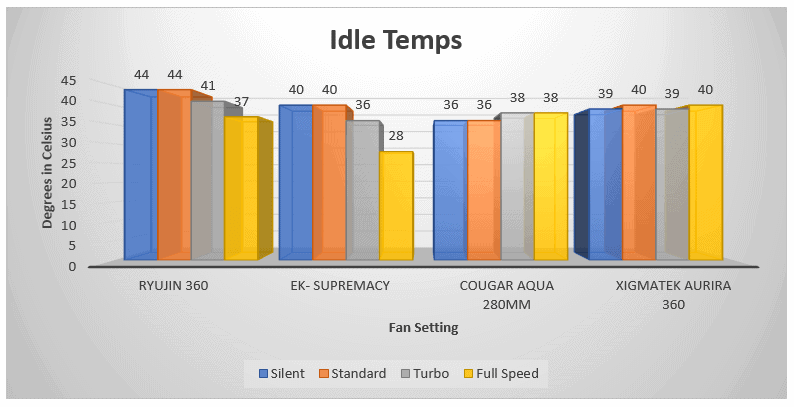 The Xigmatek performed at what I would say is average performance for a 360 AIO.  Leaving the system to idle for one hour showed little change, with temps fluctuating between 30- and 40-degrees C.

The next test is to show everyday task temps: For instance, when browsing the web and using applications. For this we are going to use PCmark. Since we don’t have fan settings, this will show me the average anytime temp during a certain workload. 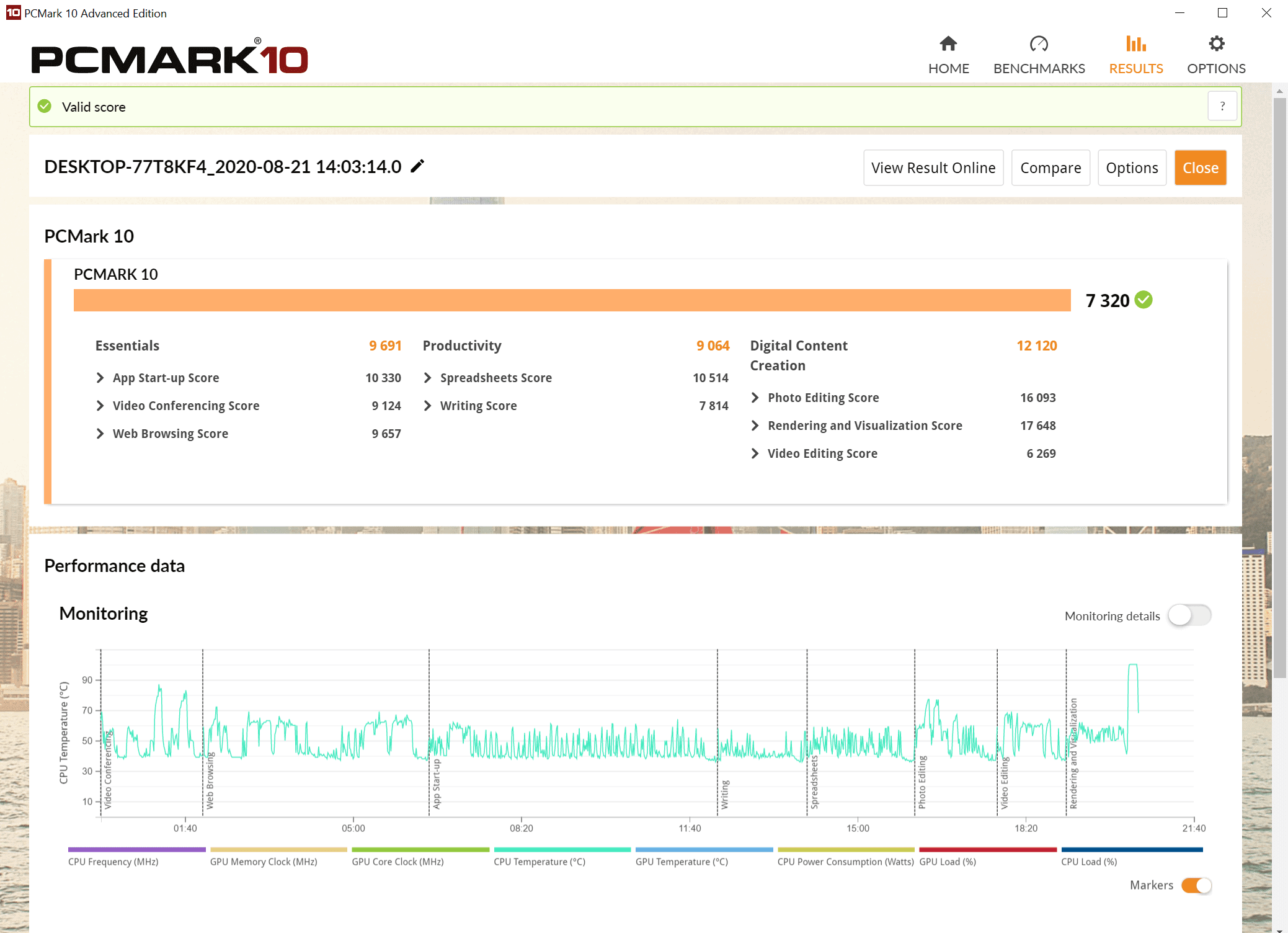 The teal line represents CPU temperature. During video conferencing there was a spike, but I had also forgotten a download was going in the background so, I’ll omit video conferencing.  Going further, we could see light bumps during web browsing, more so with intense HTML code or 3D charts topping off at 70C. Slight bumps in writing would be seen when saving a document, where temps would rise from 70C when processing a document, and spike to 99C and over for a few seconds, as we get into the later parts of rendering temps.

So, the max temp accomplished from a person doing basic rendering workloads would be around 99C in our system. Using PCMark gives you a good idea of where cooling could be improved based on your everyday workload.

The final test for cooling is overclocking. Here, I attempt to bring out the highest frequency and test the max temps before a system freeze. For this, I like to use CinabenchR20 and Intel’s Xtreme Tuning Utility. This software gives me in-depth controls similar to the bios without having to restart, while covering any faults on my part by constantly monitoring my inputs. If anything becomes too much, the system will do a quick restart and have me back in the XTU program in seconds to try a different setting while Cinabenchr20 hammers the CPU in rendering. 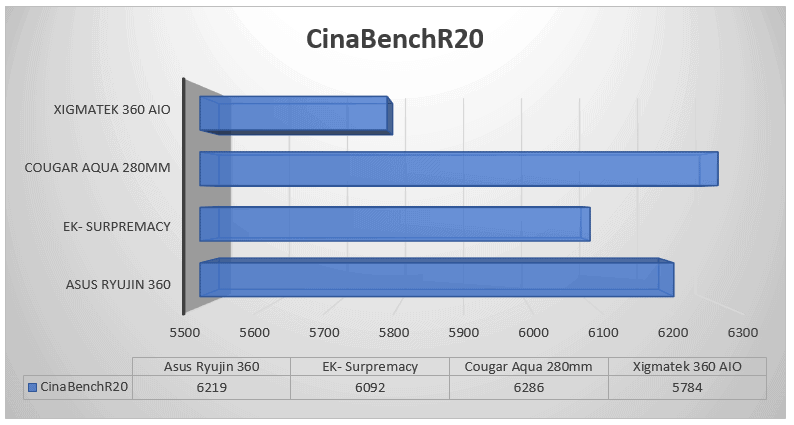 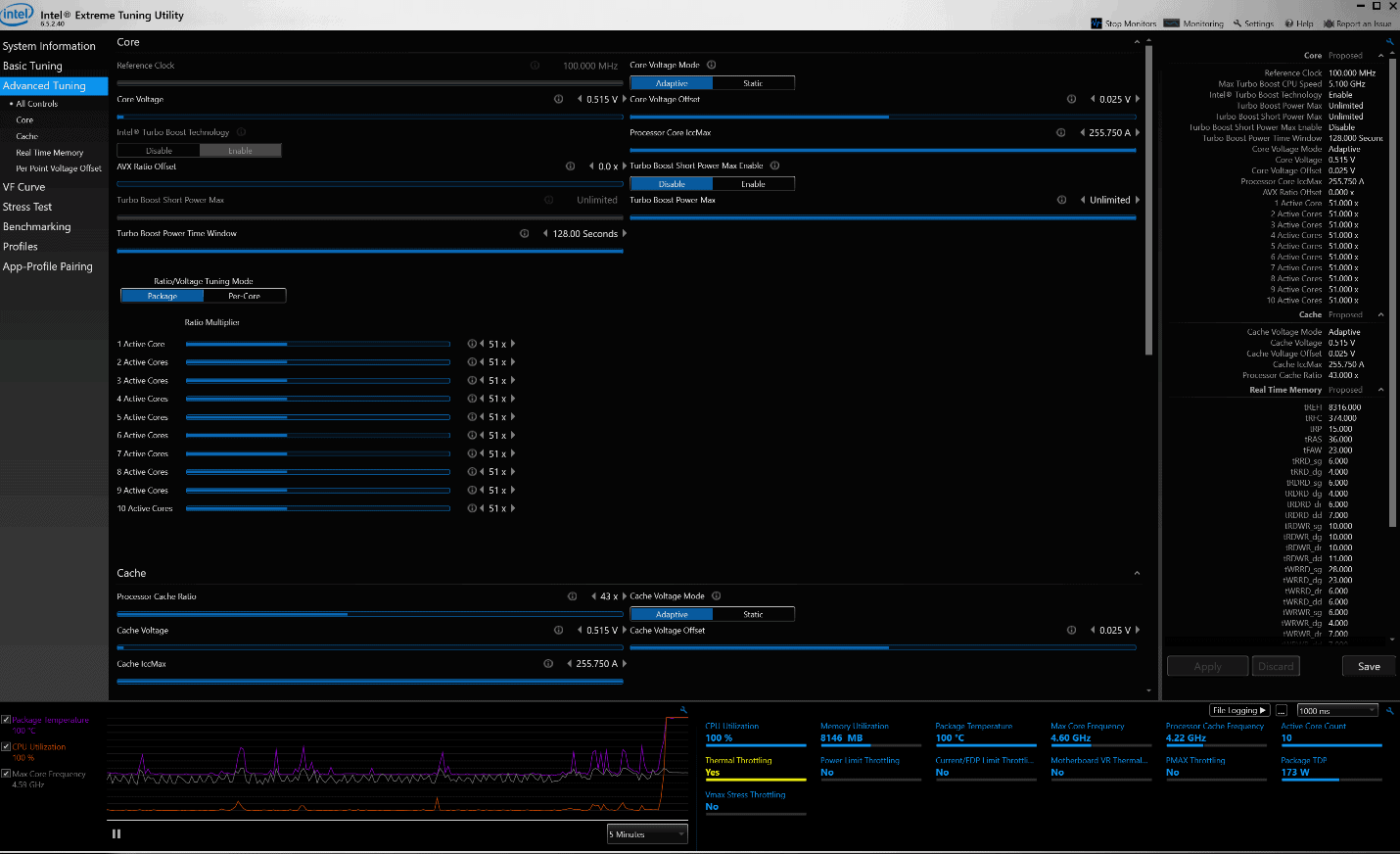 Surprised? Not me! With the low RPMs of the fans, trying to hit higher frequencies with this AIO most likely won’t happen unless you plan to delid your CPU. The Aurora 360 actually thermal throttled. After reapplying my own thermal paste from Thermal Grizzle line “Kyronaut”, temps still refused to stay under 100C. From what I could tell, the fans where at max and I was only demanding 5.1GHz from the CPU, of which Cougars 280mm could accomplish easily and while earning a higher score over Xigmateks score of 5784. I believe if I had the ability to know the exact speed of my fans and if they had a higher RPM speed, we could no doubt be in the same category as the top AIOs.  You can expect to see the same temperature results in certain gaming too. COD: Warzone hit a high of 80C during the SHIPMENT map.