Heatsinks have been around since the inception of the CPU, and manufacturers have feverishly been trying to develop creative ways to cool the latest and greatest processors that produce an abundant amount of heat. We’ve seen every type of fin array imaginable, but Zalman’s flower style design seems to stand out from the rest. Not only were they one of the first to use copper fins on their heatsinks, but they were also one of the first to experiment with different fin array configurations to enhance their heatsinks’ performance. Today, we have Zalman’s CNPS7500-CU LED CPU cooler on our test bench. This massive 848 gram beast has a low profile design and a flare for craftsmanship that many enthusiasts have come to expect from Zalman.

Heatsinks have been around since the inception of the CPU, and manufacturers have feverishly been trying to develop creative ways to cool the latest and greatest processors that produce an abundant amount of heat. We’ve seen every type of fin array imaginable, but Zalman’s flower style design seems to stand out from the rest. Not only were they one of the first to use copper fins on their heatsinks, but they were also one of the first to experiment with different fin array configurations to enhance their heatsinks’ performance. Today, we have Zalman’s CNPS7500-CU LED CPU cooler on our test bench. This massive 848 gram beast has a low profile design and a flare for craftsmanship that many enthusiasts have come to expect from Zalman.

The front panel of the CNPS7500-Cu’s retail packaging features a large, clear window to show off the top 110mm fan on the huge copper heatsink. It gives consumers an eyes-on view of what the product looks like up close so they can make a more educated decision about purchasing this item.

The back panel of the box gives a full accounting of the product’s features and specifications. There’s also another small window for displaying the copper base to consumers. Many times, consumers will purchase a heatsink without seeing how the base was machined. This is a usually a mistake because the base might need to be lapped if it was machined improperly.

The heatsink comes with all the mounting brackets needed to support Intel socket 775/478 and AMD socket AM2/939/940. Zalman also included the Fan Mate 2, thermal paste, a case badge, and a three-pin connector to connect the heatsink to the fan controller.

– Does not generate noise or vibration in Silent Mode.

Note: The fan operates at 2,550rpm (34.5dBA) if directly connected to the motherboard’s power connector without the use of Fan Mate 2.

The Zalman CNPS7500-Cu heatsink weighs in at an enormous 848 grams and is built from pure copper. There’s also another version of this heatsink that uses both aluminum and copper, but our previous testing results from other heatsinks have shown that copper is currently the best air cooled solution to help dissipate heat from the processor.

The flower design is very evident from looking at the bottom panel of the heatsink itself. The copper base is very large to cover even AM2 processors. There are also two open sides on the heatsink to allow the device to be secured to a variety of different socket types.

The copper base is machined very well, but you can still see that it’s not entirely smooth like the CNPS8700. There are still small grooves in the base, which shouldn’t affect the heat sink’s performance too much during testing. But, only the testing results will be able to determine if this statement is true or false.

The side view of the bottom of the heatsink shows how the entire CPU cooler was put together at the manufacturer’s plant. Zalman used one Phillips screw in the middle to attach the clipping mechanism, and used two Alan wrench screws to attach the entire clipping mount to the copper heatsink.

The CNPS7500 has a dissipation area that spans more than 3,500cm2. This means that not only the processor will received cooling benefits, but also the system memory, graphics card, and any other hardware components within the vicinity of the heatsink.

Lastly, we wanted to show our readers a quick shot of the instruction manual. Overall, the graphics were very details and easy to understand. Zalman provided instructions for installing the heatsink with each of the supported socket types. The only thing I would have liked to see done differently in the manual is color photos instead of computer-drawn illustrations.

To evaluate the CNPS7500’s overall cooling capabilities, we must first install the heatsink into our mid-range socket AM2 test system. This involves just a few steps that we will go over in the next few paragraphs. ( Editor’s note: The only deviation we made from the installation instructions was the thermal paste. We used Arctic Silver 5 instead of the provided thermal paste.)

After reading the installation instructions, we determined that installing this heatsink on our AMD X2 4400 processor was going to be a piece of cake. All we had to do was apply a thin layer of thermal paste onto the CPU, thread the mounting bracket through the heatsink, and attach it to the plastic mounting bracket. We didn’t even need to change out the motherboard back plate. This is very appreciated because it’s just one extra step that we feel should be considered during the initial design of the heatsink. With universal heatsinks, we typically have to remove the back plate and top mounting bracket and use the one that came with the CPU cooler. But, this particular heatsink mounted directly on the existing back plate and mounting bracket. 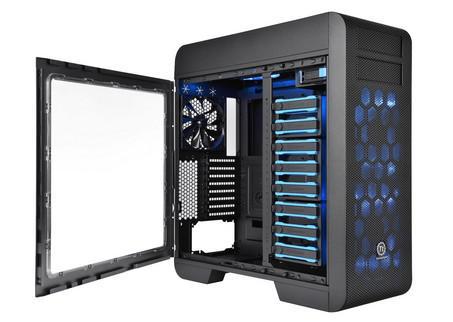 After about 5 minutes, we had the heatsink installed on our micro ATX socket AM2 motherboard. I was quite surprised at how easy it was to install, and I commend Zalman for making this process as painless as possible.

We are including this shot to show exactly how close the heatsink comes to the system memory modules. There are only a few millimeters separating the heatsink and RAM. One added benefit though will be that the RAM should get some of the cool air coming from the 110mm fan as well as have some heat pulled away from the modules.

Here’s a quick shot of the motherboard and heatsink installed in our system. This heatsink really takes up a lot of real estate on our micro ATX motherboard huh? =)

Lastly, here’s an excellent low-light shot of the blue LEDs on this heatsink. I think blue LEDs are a little played out in the modding world, but typical users with side windows on their PC cases should get a kick out of seeing these lights in their systems.

To evaluate the CNPS7500’s overall cooling performance, we compared this heatsink against Zalman’s CNPS8700 heatsink. Our testing method included recording idle temperatures and well as load temperatures. Our load temps were taken after torturing our AMD X2 4400 processor for one hour with Johnny Lee’s Orthos 2004. This program uses 100% of the resources for both cores on the E6600. All the temperature readings were taken using Core Temp software.

Here are the results we received from our testing:

Our testing concluded that the CNPS7500 came very close to the numbers we saw while testing our CNPS8700 in the same test system. Oddily enough, we received the same testing results while using these heatsinks in our Intel test rig. The results are fairly decent overall, and definitely fall right in line with other heatsinks that cost around $35.

We’d like to thank Zalman for providing the CNPS7500 for our review today. While the CNPS7500 didn’t have any flashy heat pipes or a mirror-finish base, the performance results showed us that it was able to keep up with its more modern counterparts from Zalman. The large 110mm fan was very quiet during load testing, and the blue LEDs also added a nice touch to our test system. The overall weight of the heatsink might be of some concern to those users with flimsy motherboards. If this is the case, ensure your motherboard can handle this type of heatsink before you purchase it. I also recommend ensuring your system memory will fit under the heatsink before purchasing it. Some modern RAM is much taller in height because they have heatsinks already built into them. Overall, the performance versus price was right in line with other heatsinks in this price range. While not very flashy, Zalman has stayed with this flower design for several years now because it continues to prove it self on a variety of socket types.

– Hefty weight might be an issue for flimsy motherboards

– Design hasn’t changed for several years, could use an update to make it more appealing to users